Imagine the wafting smell of slow-cooked barbecue and elephant ears floating past you as Jason Isbell deftly belts heartfelt Americana to an awestruck crowd. Off in the distance, a few hundred yards away, the thrash and burn of Anthrax can be heard pummeling a frenetic crowd of metal fans. Meanwhile, sitting on a chair covered by a stage built to resemble an old shack, traditional bluesman Robert “Wolfman” Belfour unleashes a signature performance of “Boogie Chillen” to a welcoming crowd. This unsullied performance is what Beale Street in Memphis is world famous for and what inspired the Beale Street Music Festival itself.

Since 1977, Beale Street Music Festival has taken place in Memphis, Tennessee, where it has grown to become the region’s most vital annual music event. Starting out as a roots blues and jazz-oriented festival celebrating what was, at the time, the decaying remains of the street’s well-documented bygone era, the event grew to the point where it was moved to the banks of the Mississippi River down in Tom Lee Park in 1990. Today, the festival stretches the entirety of Riverside Drive and Tom Lee Park, boasting five different music stages, each one celebrating a variety of international, national, and regional performers and touring acts. Named #6 among “The 20 Best Music Festivals of 2014” by Fuse TV, the festival now draws over 100,000 people each year. The blanket non-profit organization known as Memphis in May helps to sponsor the yearly outing, which coincides with the first weekend of their month-long celebration honoring a different world nation (this year is Panama). But what the numbers and BSMF’s history don’t tell you, necessarily, is that with so many options for music travelers to choose from nationally, organizers have been forced to respond to the pressure of staying current in an ever-changing landscape. Like the endless motion of the muddy river that flows past the event day and night, the sense of change is omnipresent, and the festival in recent years has sought to bridge the gap of age and culture.

Looking at the festival’s headliners and supporting acts over the past several years reveals additions of hip-hop and electronic acts – Bassnectar, Big Boi, Big Gigantic to name a few – that were never intended to be part of the festival’s original presentation. Offering one of the most wildly eclectic lineups out there has led to some confusion over how to categorize BSMF. Is this a rock festival? Is it a revival blues festival? What’s with the electronic and hip-hop acts? The sheer variety of acts at BSMF, some festivalgoers claim, very rarely pushes the envelope but more readily seeks to offer a little something for nearly everyone. This year alone, the festival’s hodgepodge of balls-out, big box stadium rock, legacy artists, up-and-coming national performers, and local favorites could easily be seen as too broad, trying its best to quench the thirst of nearly every type of music fan. A three-day pass holder could see everything from Kid Rock and Patti LaBelle to Alabama Shakes, STS9, Bootsy Collins, and Avenged Sevenfold, from 84-year-old music legend Jerry Lee Lewis to Foster the People, Pretty Lights, and Juicy J.

Watching legends interacting with seasoned veterans and up-and-coming acts as they go segueing wildly between entire eras and genres of music (frequently several times on each of the main stages over a number of hours) is a lot for people to process. The experience of mentally tackling the paradigm shifts of watching this very ADHD-fashioned selection of such disparate acts is not without detractors. Still, to ask someone involved with the festival about what links these fragments of commercial music, you would find the answer is not always in how many records they’ve sold or how many tickets they sell. These artists offer a more accurate reflection of the enmeshed crosscurrent of culture that exists in the Mississippi Delta region. And, okay, let’s just call it like it is: a music fan is pretty much never seeing a traditional blues artist or a rock and roll legend like Jerry Lee Lewis being escorted onto the stage at Coachella. In much the same vein as state fairs of a bygone era, there’s an inarticulate down-home quality to the Beale Street Music Festival that doesn’t come off as too hip or self-righteous. At the core of the lineup are people who deliver grand musical performances, but always with some spiritual connection to past generations of music. An examination of who attends the BSMF reveals that the scope of the festival doesn’t really compare to something like Austin City Limits, Coachella, or Bonnaroo. The sophistication behind BSMF’s artist selection often shines through by way of how genuine and unsophisticated it can be. Memphis being a tourist destination for the history of American music culture speaks volumes about what attracts people to this festival every year. There’s very little that’s “fashionable” here; what it lacks in competitive trendiness BSMF makes up for in style and substance, even if (at times) that style has become somewhat watered-down through decades of reinterpretation. If you’re into the history of American music and want to see the influences come to life, this is the festival for you.

Regardless of how the festival pulls it off, visitors to Memphis for BSMF are treated to, if nothing else, a value that is truly unbeatable. At a mere $45 per day for a single, walk-up ticket, single ticket price for walk-up, Beale Street Music Festival is, in no uncertain terms, an absolute steal. For that price, it seems that the average music fan is given the chance to see one artist that they’d really like to see and options galore before and after. Some festivalgoers agree that the lower ticket price is great, but for their tastes, they would be willing to pay higher prices to have a more manicured, neatly presented festival during this weekend. In a quest for the cavalier highs and lows of a Coachella or Pitchfork Festival experience, those folks end up missing the real point: BSMF is an undeniably populist festival. While Beale Street gladly welcomes and wants to attract those who attend the other festivals named in this article, the kinds of big-name acts that Beale Street is booking are not intended to inhabit the same wheelhouse as the Coachella, ACL, Bonnaroo or Pitchfork Festivals of the world.

Mind you, it’s not all humble and down-to-earth. There are issues (as there are at most big festivals today). There’s the constant barrage of Budweiser and Coca-Cola advertising everywhere. As with many big box festivals, there are numerous chances to obtain things like free cigarettes, free Chobani yogurt, and an endless supply of Rolaids from various people marketing within the festival itself. But in the grand scheme of things, these are mere pittances of annoyance. The main concern for most attendees, though, is the notoriously bad weather that the festival is, unfortunately, famous for. For as many years back as most can remember, the weather during Beale Street Music Festival has been conspicuously uncooperative, leading to a nickname of “Memphis in Mud” that refers specifically to the rain-soaked, mud-filled BSMF weekend. However, in 2014, if you heard people mention that old moniker, you would think they were talking about some other festival. Perfect, clear skies and 77 degree weather beamed down on Tom Lee Park for three straight unimaginably beautiful spring days, truly storybook days that everyone – from artists to fans to even the people working the festival – wished would never end.

That storybook quality likely bolstered the weekend’s performances, too. Whether in the uninhibited and glorious hometown harmonies of Memphis Dawls, the hill stomp inferno of North Mississippi All Stars, the triumphant pulse of a newly revitalized Dandy Warhols revisiting their psychedelic discography, the percussive bravado of Bone Thugs-n-Harmony, the neo-burlesque-cum-cartoon theme song revelry of Beats Antique, or the sweat-drenched soul of St. Paul and the Broken Bones, the weather got acts to dig down deep and deliver their best performances for the Memphis audiences. And for some of the artists who appear on these stages, the journey to Memphis, whether their first time or their hundredth, really is a personal one about what inspired them to make music in the first place. In the music universe, Memphis is rightfully revered as the cradle of rock and roll civilization, a birthing ground for soul, blues, and folk music stretching back well over 100 years.

As the festival ended Sunday night, the unbridled passions of Brittany Howard’s voice against the moody ebb and flow of the Mississippi hushed awestruck crowd members as far as the eye could see, her insatiable and effortless delivery taking on the lightning and spirit of Memphis soul legends like Otis Redding and John Fogerty. Hearing Alabama Shakes’ outpouring of crystalline collective talent seemed to represent the best influence found in the forlorn ancestry of musical traditions that came directly from the city where they stood. Their presence at Beale Street Music Festival may well be the work of expedient routing by a promoter or booking agent. However, the end result is something much more profound: the sense of staring down history and the ghosts that inhabit the Mississippi delta’s rich musical tapestry and all that it does to inform and nurture the imaginations of past and future generations of performers. 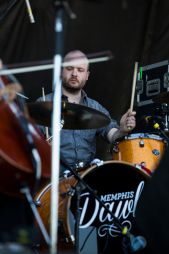 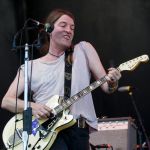 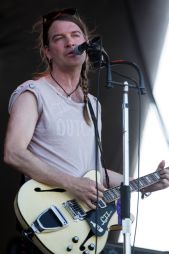 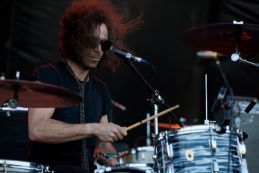 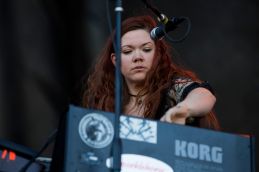 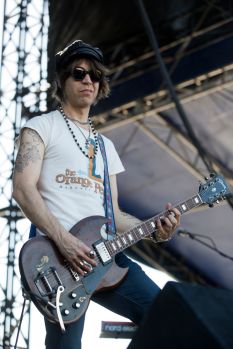 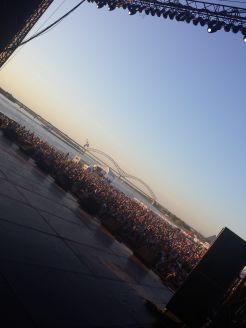 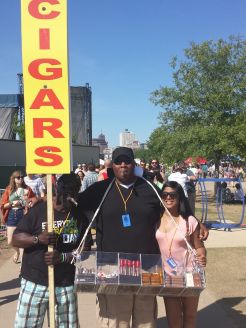 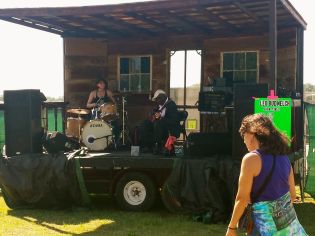 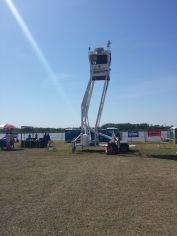 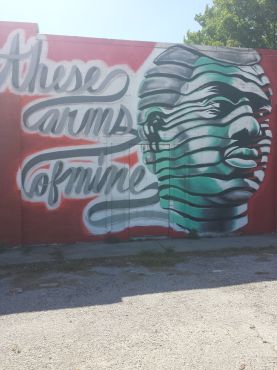