In under 20 seconds, rock ‘n’ roll, heavy metal, and barbaric “yawps” were forever changed by Robert Plant’s carnal battle cry in “Immigrant Song” — so opens Led Zeppelin’s third album, suitably titled Led Zeppelin III. Released in 1970, it was the third album of original music produced by the band in under two years. That’s remarkable output, not only in volume, but also in quality.

After a meteoric rise during those years, Led Zeppelin III was the worst reviewed album of the first half of their career and largely considered a failure at the time. In Rolling Stone, Lester Bangs criticized the album’s heavier songs for blending together while other critics called out the band for including too many acoustic-flavored songs (although there are arguably three such songs on Led Zeppelin I and two on Led Zeppelin II).

This tide of criticism hit the band hard. Their previous two albums were unqualified successes, shooting up the charts. While Led Zeppelin III reached No. 1 on Billboard charts in the US and the UK, sales fell off quickly. The critical backlash ultimately resulted in guitarist Jimmy Page refusing to give press statements for over two years and also fueled the lack of liner notes or other commentary on their untitled follow-up LP (commonly referred to as Led Zeppelin IV).

This storm of criticism has made Led Zeppelin III a bit of an underdog in the titanic band’s seemingly unassailable catalog. Critics ready for “Whole Lotta Love 2” found little to love in Led Zeppelin III’s decidedly acoustic and divergent sound. The circumstances of composition were a much-needed respite from the whirlwind career arc the band had followed since their first album.

The themes of love, dominance, and reconciliation and a thread of communication between the past and the present pervade the album. The bombast of “Immigrant Song” is born from the legacy of Norse conquerors. “Gallows Pole”, an adaptation of a traditional folk song, and “Bron-Y-Aur Stomp” borrow directly from vernacular Welsh heritage. The Eastern-influenced “Friends” takes its place among the psychedelic “peace” movement of the time. “Celebration Day” and “Out on the Tiles” represent the hard-rocking future of the band (and the world). And “Since I’ve Been Loving You” is a vestigial trace of Zep’s early, heavy blues influence.

Essentially a Tale of Two Sides, the record is masterfully composed. Most of the hard-rocking songs are on Side One, while Side Two demonstrates the softer, acoustic side of the band. After “Immigrant Song” threatens to melt all faces, Side One cleanses the palate with “Friends”, via woozy, loose tuning and John Bonham’s tabla, letting the listener re-calibrate. “Celebration Day” then kicks the album off anew, the pure rock and roll tune featuring some of Page’s more intricate arrangements. The lead riff wriggles out of one’s hands before it can be grasped, just as another scattering riff comes bounding in over the top. When it all falls away for the isolated hook, it’s like taking a deep breath of fresh air … before diving back in again.

The beating heart of Led Zeppelin III is “Since I’ve Been Loving You”, their most faithful and beautiful paean to love, heartbreak, and their blues predecessors. A lasting criticism of Led Zeppelin I is that Page “borrowed” (to put it in the friendliest terms possible) too much from the blues guitarists who inspired him. With those songs, there was a concerted effort to make them “original” Led Zeppelin tunes, through swirls of psychedelia and metal riffs. “Since I’ve Been Loving You” strips all that away, paced simply, slowly, beautifully. This traipsing tempo and relatively simple production make the pain all the sweeter. Recorded live, Page’s guitar riffs dance delicately among John Paul Jones’ soulful Hammond chords (oh, that organ). Plant’s voice, isolated in the yawning gaps sounds fresh and clear. The whole assembly takes its time building toward a delicious conclusion. Instead of trying to make the blues new, they resorted to simple homage, and in that simplicity is the truth of pain and heartbreak that gives the blues its raw power. And again, after the cathartic expulsion of “Since I’ve Been Loving You”, a traditional rock song in the form of “Out on the Tiles” comes tromping in.

Despite being significantly weaker, Side Two still contains some gems. It opens with “Gallows Pole”, an excellent representation of Page’s acoustic prowess, as his simple guitar line is soon joined by 12-string and banjo. Jones is in on the fun as well, as he adds some mandolin flourish to the mix. The chaotic conclusion matches the timbre of “Immigrant Song” (though with a sadder ending) while invoking a different aspect of English history.

If you grew up during the days when mixtapes (on actual tape) were being passed between high school lovers, there’s a good chance you know “Tangerine” well. Led Zeppelin is most remembered for their epic rock bombast, but they could be awfully dewy-eyed at times. “Tangerine” is one of their most saccharine songs, perfect for the rush of blood and hormones of teenage love, but ultimately too hypothetical (talk of 1,000-year reigns, lords, and queens) to carry the same emotional weight it did before one learns to be wary of such sweet-to-the-taste but ultimately hollow sentiment.

“That’s the Way” and “Bron-Y-Aur Stomp” follow, providing two more examples of Zeppelin’s new acoustic mood. On the former, Plant’s voice is pleading to the point of being needling, and the song, clocking in at over five minutes, feels like a drudge. “Bron-Y-Aur Stomp”, on the other hand, is a ripping acoustic romp reminiscent of a rowdy evening gathered around the hearth in the Welsh countryside. Acoustic, upright bass, spoons, and hand-claps (courtesy of Bonzo) help create the wholesome mood.

The less said about album closer “Hats Off to (Roy) Harper” the better. It’s an odd, psychedelic blues mishmash with Page playing slide guitar as Plant sings snippets of old blues tunes through a vibrato effect. It’s a weird end to an otherwise strong album.

Critical reception of Led Zeppelin III has improved markedly since its original struggles, and this reissue seems well-deserved. The remastered songs sound crisp and fresh, and the additional tracks are interesting from a historical perspective. In particular, the instrumental track for “Friends” allows the listener to focus in on the unique arrangement of guitar, strings, and percussion.

A new generation of fans may encounter this record and recognize some of the roots of rock and roll weirdness and experimentation that seem de rigueur today. While not the towering achievement of its brothers in numerology, Led Zeppelin III remains one of the great albums in rock and roll history, significant for its role in establishing the legend of Led Zeppelin that would become fact with Led Zeppelin IV.

Essential Tracks:  “Celebration Day”, “Since I’ve Been Loving You”, and “Gallows Pole”

Pick up a copy of Led Zeppelin III here… 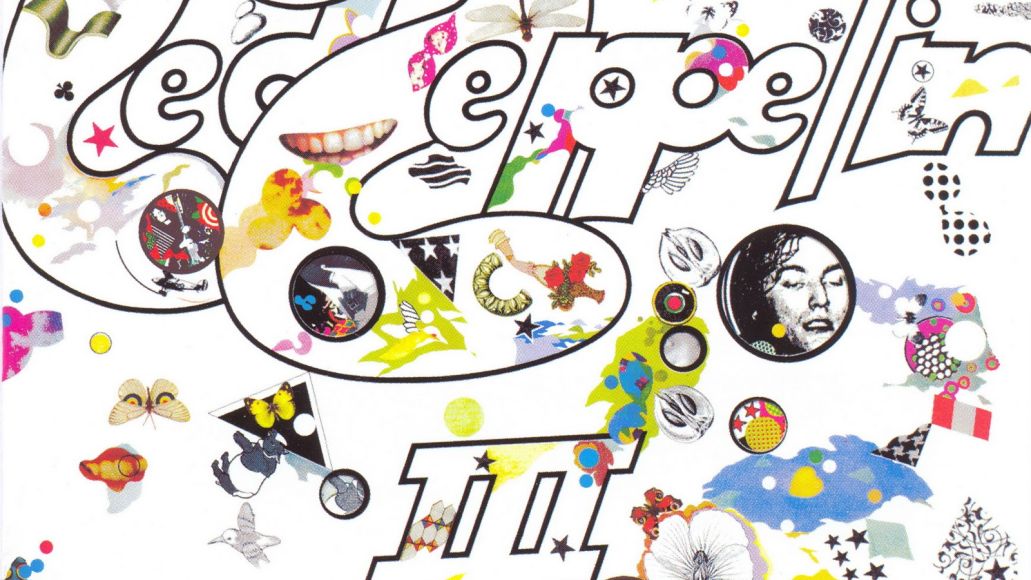