This article was originally published in August 2014, and has been updated as we honor Robin Williams on July 21st, 2021, which would have been his 70th birthday.

I was sitting at my desk in complete shock, and, according to various social media feeds, I wasn’t alone. The information came to me via a friend’s Facebook post, where he simply stated, “What” and linked to the news. That word sums up the first thought that came to our heads, doesn’t it? The first thought wasn’t of a great monologue in a movie, a stand-up bit, or “Na-Nu Na-Nu.” It was that word without a punctuation to end on — more of a statement, really. What.

Robin Williams was found dead in his apartment on August 11th, 2014, and his death was an “apparent suicide.” His publicist released this brief, but telling statement: “Robin Williams passed away this morning. He has been battling severe depression of late. This is a tragic and sudden loss. The family respectfully asks for their privacy as they grieve during this very difficult time.”

For now, please join with me as we look back on the many faces of Robin Williams. Onstage, no one could keep up with Williams. You can look up any clip of him on a late-night talk show, whether from the 1970s or earlier this year, and no matter who the host, how young or how old, the stage is his. He could never sit still, could riff on any topic thrown at him, and would seize the full attention of those who were watching in the audience. Polarizing due to an obvious lack of subtlety (he didn’t care), this was Williams the comedian, who wanted to make everyone around him do one thing and one thing only: laugh.

Williams’ stand-up act consisted of imitations, rapid delivery, and a body that never stopped moving (not hyperbole). He released six comedy albums from 1980-2003, winning the Grammy for Best Comedy Performance five times. His act would always start onstage, but would occasionally drift off into the audience, depending on where his mind wandered – often breaking away from any prepared performance to make quick banter with the crowd. An example of Williams in his prime can be found in this 1978 performance of him live at The Roxy: 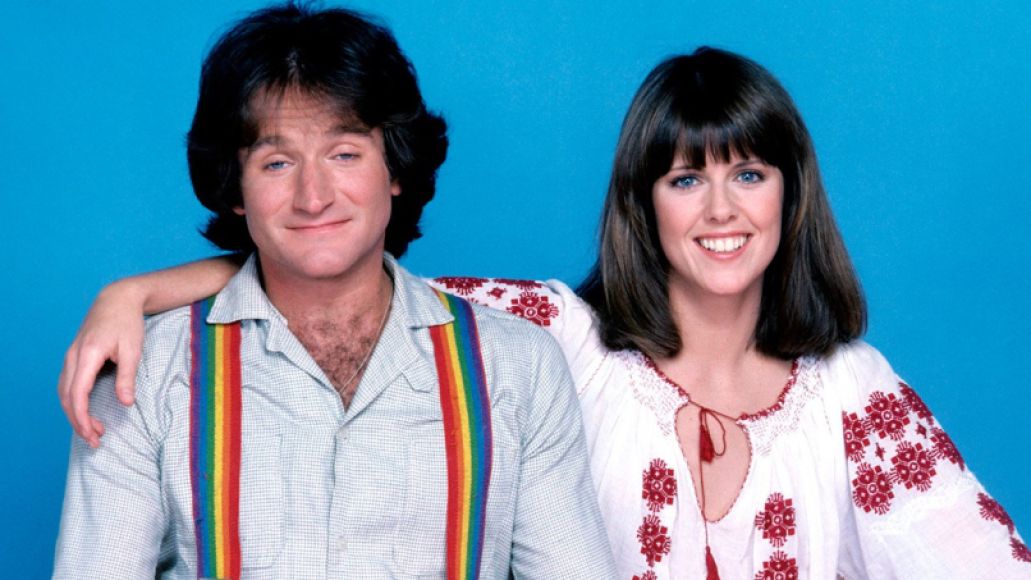 After attending Julliard School from 1973-1976, Williams’ rise to fame was relatively quick. Just two years after leaving the prestigious program, he landed a bit role on an episode of Happy Days as the alien “Mork.” What would be a one-off for many turned into a career for Williams, who saw his character spun-off into the ABC show Mork & Mindy, which lasted for four years. His eccentricities paid dividends as his TV character struggled to adjust to life amongst humans, only to fall in love and have a baby in the form of a full-grown (and fellow comedic legend) Jonathan Winters. Did I mention Mork & Mindy was a sitcom?

In 1986, Williams joined forces with fellow comedic superstars Billy Crystal and Whoopi Goldberg and helped launch HBO’s Comic Relief specials in 1986 — charity specials featuring both up-and-coming and established comedians in efforts to raise money for the homeless. The show aired annually for 12 years, raising over 50 million dollars. In 2006, the trio returned once more to Comic Relief to raise money for victims of Hurricane Katrina. Williams won his only two Emmys in back-to-back years with 1987’s Carol and Carl and Whoopi and Robin and 1988’s ABC Presents A Royal Gala, both for “Individual Performance in a Variety or Music Program.” So yes, in 1987 he outshined Carol Burnett, Carl Reiner, and Whoopi Goldberg in a shared special. Unfortunately, his return as a regular to network television ended in failure on CBS’s The Crazy Ones, which was cancelled after just one season despite a great cast that included Sarah Michelle Gellar (Buffy the Vampire Slayer), James Wolk (Mad Men), and Hamish Linklater (The New Adventures of Old Christine). 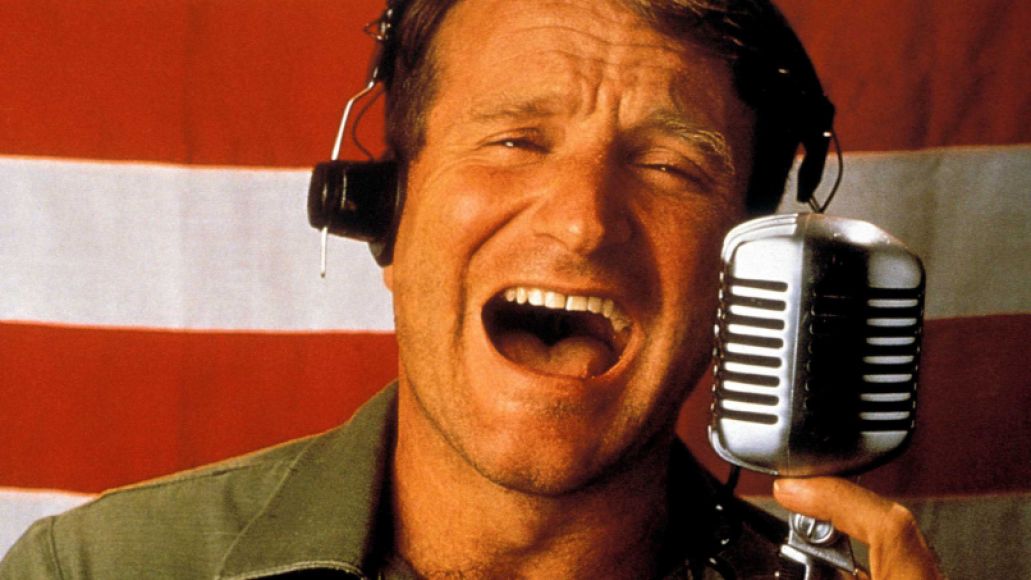 Though his film selection faltered around the turn of the century, it’s hard to ignore the success he had with comedy on the big screen. A few years after receiving a Golden Globe nomination for his performance in Paul Mazursky’s comedy Moscow on the Hudson, Williams would receive his first Academy Award nomination for Best Actor for his role as DJ Adrian Cronauer in Good Morning Vietnam, which includes the unforgettable radio call of the film’s title. His comedic roles would turn a darker shade in works such as Cadillac Man in 1990 and Terry Gilliam’s The Fisher King, which earned Williams another Academy Award nomination, this time for Best Supporting Actor.

Though Hook failed to both win over critics and rack up dollars at the box office upon the time of its release, the children of 1991 have yet to grow up when it comes to this Spielberg film. Decades later, kids and those in their thirties will still cry out “Ru-fi-o!” and root on Williams’ adult Peter Pan as he faces off against Dustin Hoffman’s Hook during the film’s final showdown.

On the animated front, Williams is best known for his iconic role as Genie in Disney’s Aladdin, which helped continue Disney’s resurgence after the success of both The Little Mermaid and Beauty and the Beast. Genie is essentially a stand-up animated version of Williams, down to the manic movements and never-ending impressions, and it’s a performance as beloved by adults as it is kids. In 1994, Williams brought Mrs. Doubtfire to life. An absurd premise (and really quite disturbing if you think about it too hard), the film avoided the comedy pratfall of a happy ending — and inspired an entire character arc on Arrested Development. Williams’ closing monologue to the little girl whose parents are divorcing still tugs at the heartstrings with its Sesame Street-like attitude of not dumbing it down for the kids:

Other notable comedy hits from the ‘90s include his performance as a boy lost in the board game-come-to-life adventure of Jumanji, and as a gay father whose son is coming home with his fiancée for the first time in the broad comedy of The Birdcage. It was on the big screen where Williams found his dramatic calling, at least in the eyes of the movie-going audience. After dabbling in drama in earlier films, his first notable performance came in 1989’s Dead Poets Society. He earned another Best Actor Oscar nomination for his role as English teacher John Keating, whose unorthodox lessons gradually inspire his students over the course of the film. The American Film Institute recognized Keating’s line “Carpe diem. Seize the day, boys. Make your lives extraordinary,” as one of the Top 100 Greatest Movie Quotes.

He appeared in two Kenneth Branagh films in the ’90s: the first as a fallen psychiatrist in the underrated masterpiece that is Dead Again, and later in a bit role as Osric in Hamlet. However, it was in 1997’s Good Will Hunting that Williams found not only his best dramatic role, but his best role, period. His performance as Sean, Will’s therapist who grew up with an upbringing similar to his, earned Williams his first and only Oscar for Best Supporting Actor. Where to begin with his finest moments in this film? Here are but two of many:

It’s Not Your Fault:

The last 15 years of his career saw Williams appearing in less-than-desirable films with little substance, ranging from weepies (Patch Adams, Bicentennial Man) to comedy misfires (RV, License to Wed). It was when Williams went dark that his performances became interesting; 2002 was the most notable year for these fringe performances, beginning with an unhinged photo developer in One Hour Photo, a demented murderer blackmailing Al Pacino’s detective in Insomnia, and a down-on-his-luck children’s performer in Death to Smoochy.

He also starred in Bobcat Goldthwait’s darker-than-dark comedy World’s Greatest Dad, who covers up the autoerotic asphyxiation death of his son as a suicide. Grim, yes, but easily the riskiest role Williams had taken in years. I have said all of this to say this one thing: You can have all the money in the world, all of the fame, all of the success, be engaging in crowds both small and big, win awards, do it all, but still fall victim to the disease of depression. From what we know, Robin Williams withstood the evils of the disease as long as he personally could, but in the end fell victim to the endless whispers of negativity that plague those with depression. Many of us deal with similar whispers, always personal and always specific to that ill person. Some suffer greater bouts with depression than others, but those who suffer still suffer.

If you feel you have no one close by to turn to, there is always the voice of an anonymous stranger waiting to take your call on the other line. Here in the States, the number for the National Suicide Prevention Lifeline is 1-800-273-8255.

There are numerous stand-up comedians who have achieved iconic status over the years. There are many great and gracious dramatic actors who let their scenes breathe and listen to their fellow actors. There are countless comedians who are always one step ahead of the others on the big screen and television. Robin Williams was all three.

A Goodbye to Robin Williams