It’s a pity Fela Kuti’s average song length was something like 20 minutes. The godfather of afrobeat, a polyrhythmic sensation of sound and protest, never quite had a chance at being a radio star in the States. No one knew how to pick the most advantageous three minutes out of his African symphonies and give him a hit single, so he never quite achieved the easy-going world music crossover success of a Bob Marley. Critically lauded, internationally recognized, but not quite the household name he should have been, Kuti was a little outside of his own time. This is the best kind of subject for a musical doc. Who needs another Beatles or Stones piece, when you can get in on the magnificent, reactionary, truly transgressive Fela Kuti and learn the sound of afrobeat?

That’s part of what makes Alex Gibney’s documentary so fascinating. Built as a companion piece to the hit musical Fela!, Finding Fela takes Fela Kuti and gives the musician the full biographical experience. When it’s not giving you in-depth looks at the musical, Finding Fela is a comprehensive and ear-opening work. Fela was a fascinating, distinctive musical personality. Like the man himself, the movie hits the screen, practically raising both fists, loud, proud, here to shout, “This is Fela!”

Born in Nigeria, Kuti and his bands, Africa ’70 and Egypt ’80, were hot in his home country throughout the two decades his bands were respectively named for. Kuti’s sound was all his own, fusing his classical jazz education and affinities for Miles Davis with James Brown’s loud, proud, power-band sound. Kuti Africanized those influences into his own gigantic and infectious sound. He would have bands with anywhere from a dozen to upwards of 70-plus members on tour at any given time. His music was characterized by long passages of circular brass and horns and beats and funky piano, well before Kuti would even think about singing. And when he sang, you knew it would be hot stuff.

For a primer, stop reading, right this second, and listen to “Water No Get Enemy” off Expensive Shit, an album written in response to Nigerian cops planting a joint on Kuti in an attempt to arrest him. The 11-minute version if possible. It embodies everything previously discussed, and it’s arguably his most accessible work. (Also, it was my entryway to Fela, thanks to my brother and super DJ Gilles Peterson.)

Finding Fela takes the time to characterize Fela’s beats and tunes. It has plenty of great stock footage and even more music. The film easily has the most comprehensive and focused soundtrack of 2014. It’s impressive in how deep the cuts go. If you’ve never heard of the guy, haven’t listened in a while, or aren’t even that hip to world music, it’s inarguably sensational music appreciation. You’ll know the afrobeat sound by the time the movie is over.

Yet, it’s not just the music that makes Fela strong, as this is a terrifically objective study of a gifted musician. And like so many gifted musicians, Kuti was no slouch in the sonuvabitch category. In reaching that sound, Kuti would overpopulate and underpay numerous musicians (thus, the switch to Egypt ’80 when his old band was fed up). He was a bigamist of epic proportions, sporting 27 wives and pitting them against each other for his love/sex/power. Kuti smoked a lot of grass, had loads of dangerous, unprotected sex, and loved pissing off the authorities.

Still, as a reactionary, Kuti was incendiary. He believed in empowering the people of Africa, fighting the system, and often it came at a cost (beatings, arrests, even death of family), but it was the fuel that powered his dynamite sound. He would name names, pick on police, decry his Africa with the dream of a free and beautiful future. Referencing Haitian voodoo, Kuti wrote the song “Zombie” to mock military and police. Beasts of No Nation was a confrontational album, with vampire versions of Thatcher, Reagan, and South African president P.W. Both planted square on the cover. Kuti went after cops, courts, and world politics in the worrisome “craze world.” Finding Fela does a strong job getting the point across that Kuti was an activist artist.

The only setback for the doc is when it cuts back to footage of the musical. Yes, it’s owed its due as the reason we’re here digging into Fela Kuti and his records, and the show looks like a lot of fun, but it gets in the way of more deeply focusing on Fela the man. The musical feels like an overt promotion, despite its modernist reflection. Still, as a full-bodied feature about a famous figure in world funk, Finding Fela mostly makes the effort it promises in its title. Its beats may be familiar, but they really feel right. 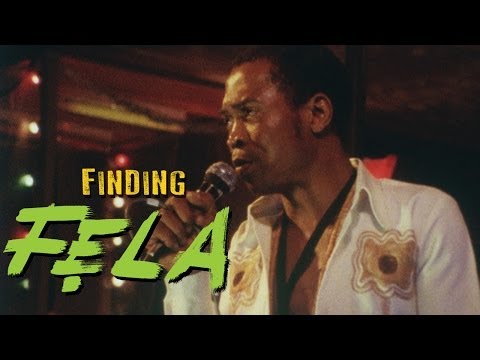