Blame it on Halloween, but the fall season is typically aligned with death and/or dying. Leaves tumble off their branches, the sun fades away earlier and earlier, and there’s an unshakable sense of finality wafting through the air. (That, and pumpkin spice lattes.) Though, the season isn’t all doom and gloom. Autumn celebrates life as much as any other season — after all, All Hallow’s Eve has its roots in the Pagan rituals of rebirth — and that’s especially the case for new music. In the past, artists have released their best work in the fall, and this year appears to uphold that tradition. So, as you brew some homemade cider and piece together your zombie costume in the coming weeks, take a hiatus from the haunted house CDs and put on something fresh and new. Here are 25 bold suggestions. Alt-J – This Is All Yours

After Alt-J’s debut album, An Awesome Wave, seemingly came out of nowhere to win a Mercury Prize, the British band, now a three-piece, looks to further deliver on the buzz with This Is All Yours. In the lead-up to the release, they certainly aren’t playing it safe. First single “Hunger of the Pine” features an equal parts fitting and baffling Miley Cyrus sample while the second preview, “Left Hand Free”, was made out of a “joke” riff. At their label’s request to make a more palatable hit, Alt-J made a single that appeals to “American truckers with ‘Good Riddance to Bin Laden’ stickers.” That said, their fans still like it. –Josh Terry 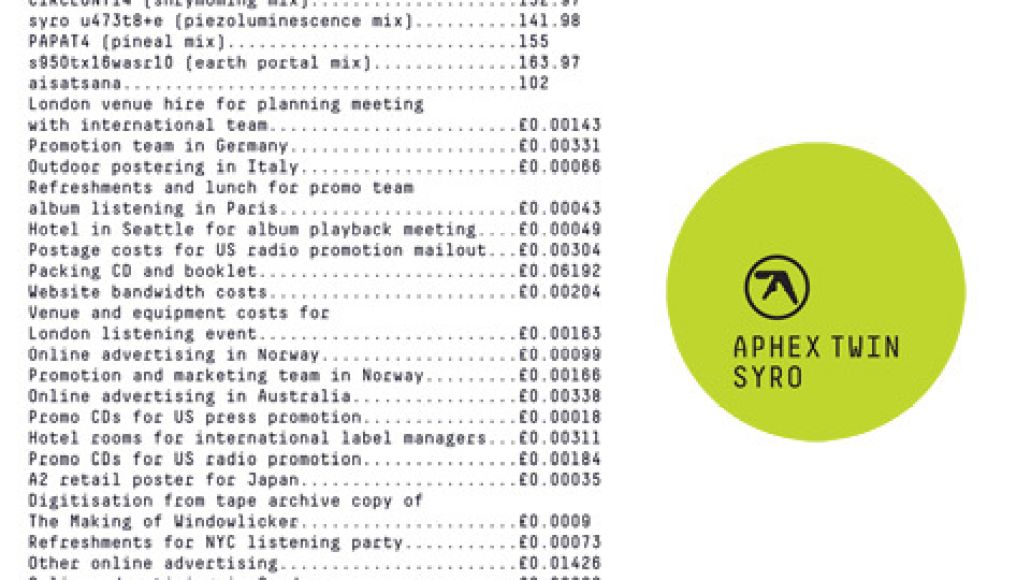 Last month, Richard D. James, aka Aphex Twin, announced his first new album in over 13 years by linking fans to a .onion Deep Web domain. Upon accessing the site, a text document revealed the album’s title, SYRO, in addition to a 12-song tracklist. The included artwork also featured Aphex Twin’s trademark logo, the same one that was imprinted on a blimp flying over London the weekend prior. “I’d stockpiled up so much stuff and you can kind of have to draw a line under it somewhere,” he explained to The FADER. “By banging something out it, it’s like the end of the chapter. It properly draws a line under it and allows you to move on.” Fans should be stoked to know this isn’t a one-off, but the start of a new series of releases. Perhaps you’ll wanna celebrate with that insanely limited edition vinyl box set? Go nuts. –Michael Roffman Know this: Tyranny is hands down the most eccentric collection of music from Julian Casablancas yet. We’ve been listening to the album over the past couple of weeks and can safely attest to that ludicrous statement. But it’s true, and if the band’s 11-minute single, “Human Sadness”, isn’t an indication, then perhaps their erratic promotional campaign throughout the year can offer more insight. Between oddball video collages to polarizing festival performances, The Voidz hasn’t exactly been an easy project to grasp. Admittedly, the album won’t offer too many answers, but that should appease Casablancas’ longtime fans, who are partial to a little mystery. If anything, Tyranny proves this season’s most adventurous listen. –Michael Roffman On September 21st, Leonard Cohen will celebrate his 80th birthday. Two days later, he’ll drop his 13th studio album, Popular Problems. While I’d normally dismiss new material from an octogenarian as (at best) irrelevant or (most likely) a threat to his legacy, this is Leonard Cohen we’re talking about; the man defies convention. Brooding, ominous single “Almost Like the Blues” has Cohen sounding raspy and raw, as if every utterance is a portent of unimaginable atrocities. Unable to cope with the death and destruction polluting his mind and soul, Cohen can only drop his head and grieve. Oozing pain and anguish, he grumbles: “I couldn’t meet their glances/ I was staring at my shoes/ It was acid, it was tragic/ It was almost like the blues.” –Henry Hauser The cover of Perfume Genius’ third album, Too Bright, is the first where Mike Hadreas’ image doesn’t appear in some way mutilated. Dressed in gold sequins with his hair slicked back, the singer looks almost inhumanly polished, like a mannequin or a RealDoll. The lead single from his new record, “Queen”, turns up the sheen in sound as well. It’s the first Perfume Genius song that can truly be described as a “banger”, and not in the Miley way — this is an anthem for the fucked-up, forgotten, and misunderstood who have learned how to strut about it. If “Queen” is any indication, Too Bright will be an off-kilter pop record about finding the gleam in your brokenness, a queer record for the history books. –Sasha Geffen