On the famed Danube in Budapest rests A38, a venue, bar, and restaurant that describes itself as a “cultural center.” For its sold-out Caribou show on Friday, it certainly succeeded in attracting a large group of people from a pretty impressive mishmash of cultural backgrounds. There were the Canadians who I ran into on the walk over—who took every opportunity possible to jay-walk. (Americans…  I figured at first. I’m allowed to say that with disdain because, y’know, I’m one of them.) There was the woman from Bratislava and her boyfriend, proudly donning his rainbow-patterned Caribou t-shirt. There were plenty of Hungarians, of course, from a variety of tongue-twister cities. Even the ship itself was “multi-culti”—yes, A38 is on a ship—an old Ukrainian stone-carrier ship, to be precise. And there was the vodka I chose for the night, hailing from Finland. Like the music of Caribou itself, the night was an attractive fusion of different backgrounds and influences—blended together and united by a vibrant pulse. 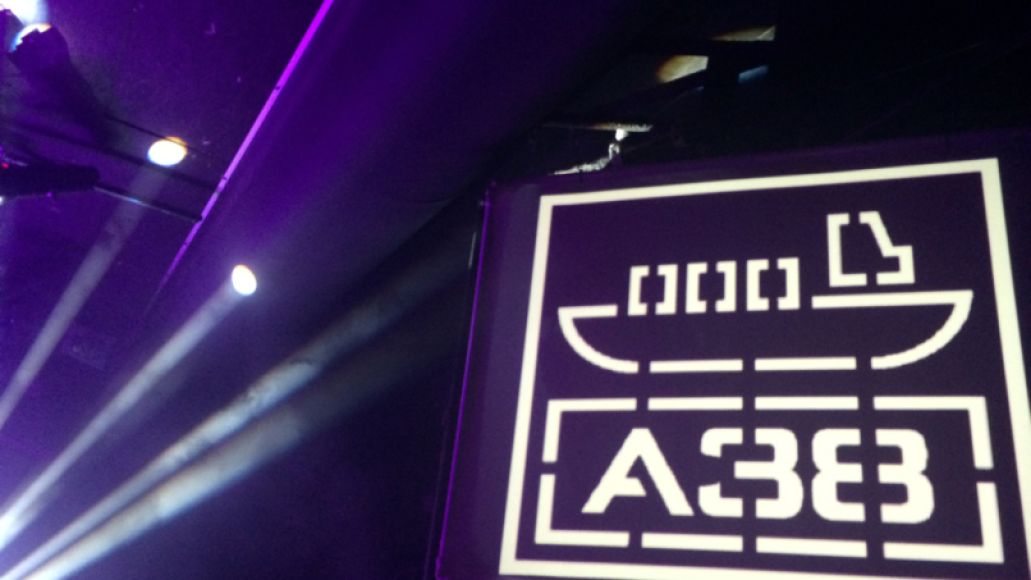 Dan Snaith, the Canadian man behind Caribou, took the stage along with his three bandmates, all of them smiley and dressed in all-white like a group of good-natured painters. The group opened with “Our Love”, the title track off their latest album, which found Snaith repeating “our love” tenderly like a lullaby. Drummer Brad Weber kept a steady, hypnotizing rhythm, and I could (literally) feel the song pick up as it neared its peak—thank you, short pushy gentlemen with the pointy elbows.

After playing two particularly clubby renditions of “Silver” and “Mars”, both also off the new album, Caribou slowed it down for “Found Out”, a track off 2010’s Swim. I found the older, more relaxed song to be a welcome break from the in-your-face attitude of the Our Love material. (I was met with cries of “You’re wrong!” when I tried telling the Canadians that Swim is far superior to Our Love). During “Mars”, people were actually doing the whole raise-the-roof thing, all fist-pumps and smiles, but during “Found Out”, the crowd mellowed out, preferring to dance using the classic head nod move. 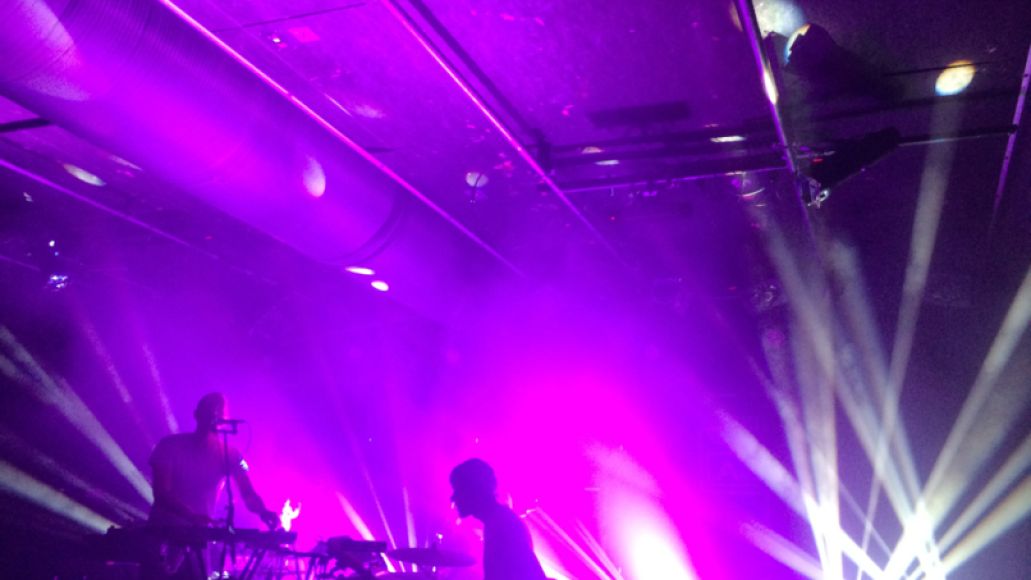 “All I Ever Need” offered another more dance-oriented spin on the Our Love track. Quickly, the room filled with warm, boozy breathing as people mouthed along to the words—“Best I ever had, Best I ever had…” — and at one point Snaith added a sharp series of what I can only describe as laser-tag noises, prompting the two short men with elbows to begin violently shaking one another by the shoulders.  But “All I Ever Need” really was just a warm-up for “Bowls”, a smooth track off of Swim that, when performed live, morphed into an aggressive barrage of drumming, strobe lights, and a high-pitched flood of noise. The two men, at this point, began slapping each other in the face.

Eventually, concert opener Jessy Lanza, also a Canadian electronic musician, returned to the stage to add her aery, sugar-sweet vocals on “Second Chance”. Most people in the audience took the more toned-down song as a chance to take pictures and break from dancing, but I’d say it was one of the most solid performances of the night. Lanza’s vocals soared far above the phone cameras jutting out of the sticky crowd like lit-up whack-a-moles. 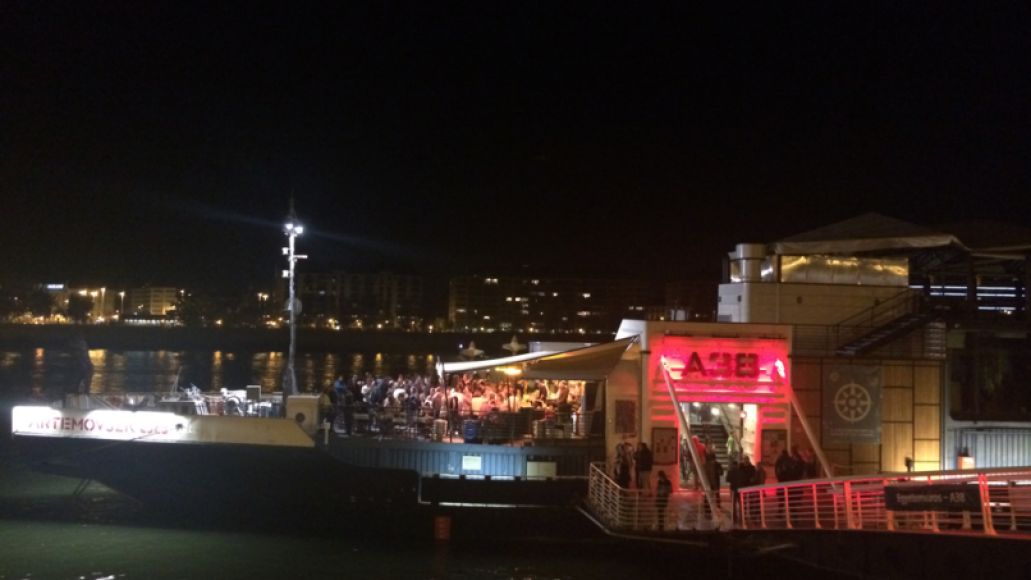 And then there was “Odessa”, Swim‘s super-slick opener. I knew this was going to be good, but damn—Snaith whipped out that tambourine and all hell broke loose. At one point, he jammed out on a recorder—kudos to you, Snaith, for managing to take a cheap plastic instrument we learned how to play “Hot Cross Buns” on in fourth grade, and turning it into something downright sexy. Doing a quick spin around toward the end of the song, I realized almost everyone was smiling.

The second to last song of the night drifted in through a murk of heavy drumming and outer space noises, but eventually we realized with a hearty “YEEEAHHH” that the song was Our Love‘s lead single, “Can’t Do Without You”. As the song ended, Snaith and his three electronic painters were all positively beaming. He thanked the audience for probably the third time of the night, while the drummer came up to the edge of the stage and, with a giant grin, began triumphantly high-fiving screaming crowd-members. It was very charming, almost like a dad high-fiving a crowd of Little League players after a game that they didn’t win, but that’s okay because, remember kids, it’s the effort that counts! 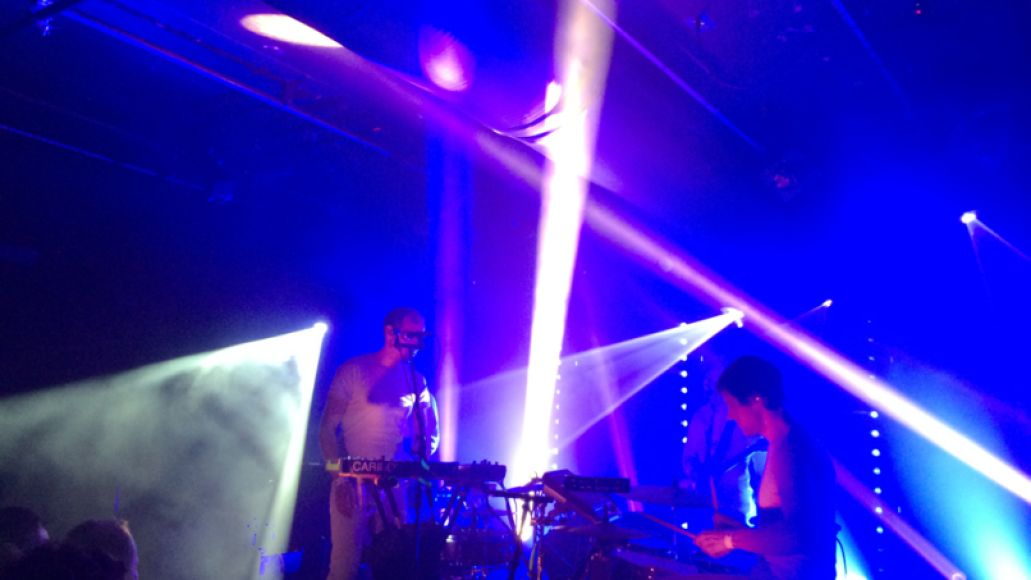 Seconds after the band exited the stage, a crowd member in the front was able to start a meager but heartfelt group chant of “Sun!  Sun!  Sun!”. Shortly after, there was a brief period of maybe 10 seconds during which it seemed as if everyone was holding their breath. The room went silent as we waited, the stage still lit in a hazy blue as the fog machines continued to run on the sides like a ghostly presence. And then our wishes were granted—the boys returned to the stage to play the indisputable hit of the night, “Sun”. Golden lights beamed down on the stage, and the room burst aglow with the warmth and energy of a thousand “sun, sun, sun, sun”s.

By the end, Snaith declared that we were a “lovely” audience and that he had an “amazingly wonderful night.” Nice guy, right? No lie: The man’s sincerely charming and if his smile is any indication, he lives for this stuff. As such, Caribou’s performance was animated yet smooth and provided a sense of energy that drove the night forward. No lifeboats were necessary.

Setlist:
Our Love
Silver
Mars
Found Out
All I Ever Need
Bowls
Second Chance
Jamelia
Back Home
Odessa
Your Love Will Set You Free
Can’t Do Without
Sun