Remembered for artwork such as the now-classic Marilyn Diptych or his use of repeating imagery, Andy Warhol drew upon his experience in the commercial art world of advertising to become a leading figure in the visual art movement known as Pop Art. Often using common, everyday items such as Campbell soup cans, Coke bottles, Brillo pad packages, or even the images of celebrities like Marilyn Monroe or world leaders such as Mao, Warhol managed to take seemingly benign items and turn them into a commentary on the media, society or even pop culture itself. His deceivingly simplistic creations challenged convention and at times even had his critics questioning if what he did was art, but Warhol himself silenced naysayers saying, “Art is what you can get away with.” A sentiment that boldly captures in words what his art has always done, couple commercialism with fine art and push it near the breaking point.

Beginning in 1980 Absolut vodka would launch what would go on to become one of the most successful ad campaigns in the history of advertising. Still running today, this nearly ubiquitous campaign has run longer than Warhol’s entire professional career. Originally conceived by the ad agency TBWA, Absolut‘s now legendary adverts use the simple imagery of the company’s signature bottle and often just a two-word phrase “Absolut ____”  to make a grander statement about the product, the state of the world, the time or season of the year, what have you. Over time the ad images would extend beyond the printed page, including incorporating a music chip to play Christmas carols or using holographic techniques. Beginning in 1986 Absolut began collaborating with contemporary artists, commissioning them to create a unique piece of artwork with the bottle as its focus. The first of such artists was Andy Warhol.

While it may be argued that there could have been other artists better suited for such a collaboration it is of interest to note that it was Warhol himself who suggested it saying, “I love the bottle, I want to do something…”  Seeing the “long‐term benefits of associating the Absolut brand with cutting edge contemporary art”, Michel Roux, the head of Absolut’s American importer Carillon, championed Warhol’s idea. With that, Absolut Warhol was born. Just as Warhol’s own work paved the way for others to follow and was often seen as a harbinger of trends and styles, “Absolut looked to Warhol as a kind of cultural prophet whose actions and choices would be followed by others”. The ad’s immediate success led to future commissions with other contemporary modern artists, including Annie Leibovitz and Keith Haring. 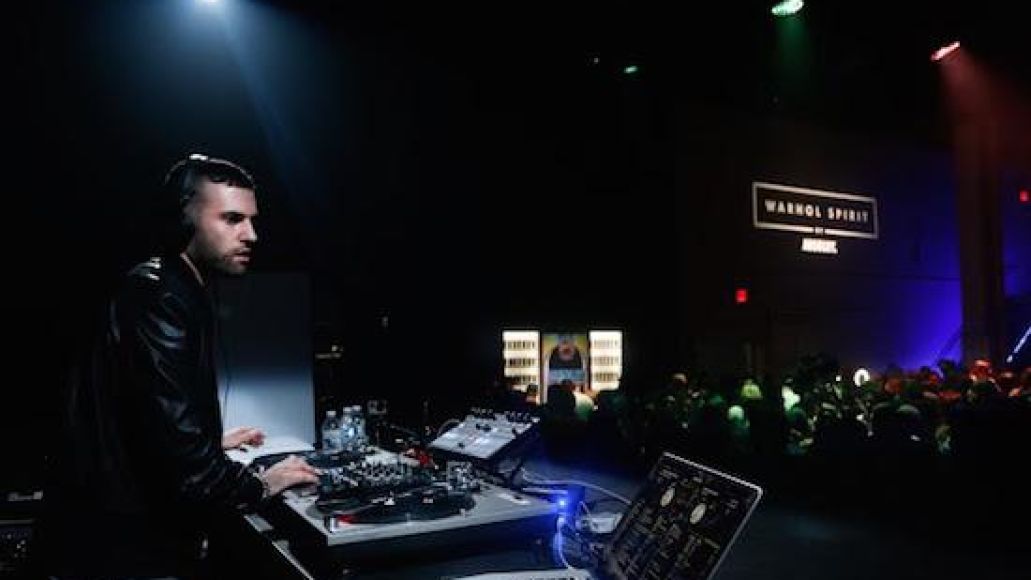 This past September Absolut announced its intention to celebrate the famed Warhol image with an original art piece in the form of a tribute bottle called “Make the Holidays Pop”. Black in design, the bottle features details in yellow, blue and pink, replicating the original commissioned Warhol painting. A portion of the sales will go to support the Andy Warhol Foundation. In addition to celebrating Warhol with a limited edition tribute bottle, Absolut and the Andy Warhol Foundation teamed up to create a multi-media event.

“The idea of collaborating with Absolut really came from being inspired by what Andy did during his lifetime,” explains Michael Hermann of the Andy Warhol Foundation. “We don’t try to replicate what he did. But we thought, ‘What could we do today; what would resonate with people who are inspired by Warhol?’” The answer: an avant-garde art party. Captured in a four-minute film called Connecting with Warhol, Absolut and the Andy Warhol Foundation teamed with DJ A-Trak, European light artist(s) Schnellebuntibilder and experimental EVP artist Leif Elggren, to create a one of a kind and certainly unprecedented collaboration.

“EVP means electronic voice phenomenon. I use really simple recording devices. I record what is happening, sort of magnifying it, stretching it out, changing the pitch, tone, frequencies, trying to pull out what we can hear that sounds like a voice,” explains conceptual artist Leif Elggren. Using this technique, Elggren took Warhol’s alleged messages and with the assistance of audio-reactive visuals and music, creating an entirely new work of art. “I was invited by Absolut to create this situation to communicate with the spirit of Andy Warhol using my EVP machine.”

Unlike Warhol, who put bottles to canvas, visual artists Schnellebuntefilder turned the tables ever so slightly, “It was a challenge to use the bottles as a canvas.” Following in Warhol’s footsteps to do something with the bottle, Schnellebuntebilder designed a giant grid with bottles hanging from the ceiling, treating each bottle as “a pixel in a big installation where every bottle will become one light point,” explains one half of the artistic team.  Further defining the team’s motivation, the use of the multiple bottles is reflective “of the repetitive element from Andy Warhol.”

These artists, like their inspiration, challenged conventions and through their own works helped to re-define what art is and can be. This event and this collaboration of artists not only served to demonstrate the impact and influence of Warhol’s work and life but also its ongoing relevance, nearly 30 years after his death. “Warhol’s place in our history is pretty well secured as one of the most important artists in the 20th century. What I think this event underscored is that his influence in the 21st century continues to grow,” summarizes Hermann.

Connecting With Warhol: Absolut, Vice and the Andy Warhol Foundation