Over the last year, we’ve taken a closer look at the bands and artists that populate the charts and airwaves. We first examined rap’s most profane artists; MCs with the biggest vocabularies; the correlation between certain acts and SAT scores; and most recently, the rock bands with the largest lexicons. Now, we get even more specific by studying the song titles of Billboard hits throughout the decades.

Based on the graph below (via Prooffreader), it seems our song titles have evolved (devolved?) pretty drastically in the last 60 or so years. Not only are they becoming less specific, but we’re actually finding ways to shorten them to mere letters. Yes, it’s all rather a tad depressing.

To be fair, as Prooffreader points out, a change in diction could be related to the fact that, as time went on, it became increasingly unnecessary to include the genre of said song in the actual title. So, maybe it was important to label a song “Polka” or “Boogie” in the 1940s, whereas it’s pretty much an unheard of practice today. Another interesting thing to note is the proliferation of the pronouns “We” and “You/U” vs. words denoting familial relationships like “Uncle” and “Mammy”. This seems to suggests that, although our vocabulary may be growing duller and duller by the decade, our sense of inclusion beyond simply the family has expanded.

Check out the full graph below and head here for more information on the methodology behind it. 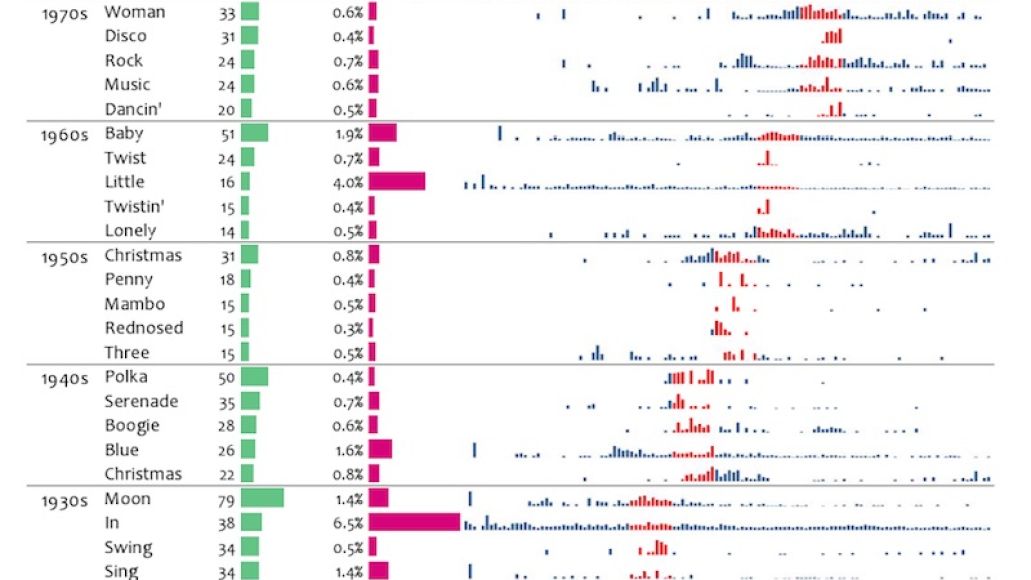 The Slow Decay of the English Language as Illustrated by the Titles of No. 1 Singles