Over the past several years, we’ve discussed Coachella’s move toward pop music, their emphasis on main stage EDM and catering to the rave scene, and their lack of female artists featured at the fest. 2015’s lineup almost looks like none of these controversies were ever a thing.

Sure, there is Hozier, Florence and the Machine, Kiesza, The Weeknd, and Drake — all of which have mainstream appeal. But none of these are as overtly pop as Pharrell Williams or Ellie Goulding. Yes, big name EDM acts like David Guetta and Swedish House Mafia alums Axwell and Sebastian Ingrosso are on the bill, and could conceivably play a late-night main stage set, but none are likely to land the kind of placement that Calvin Harris or Justice have in years past (plus, artists like Jon Hopkins, John Talbot, Flying Lotus, and Gesaffelstein offer alternatives from the typical Sahara fare). 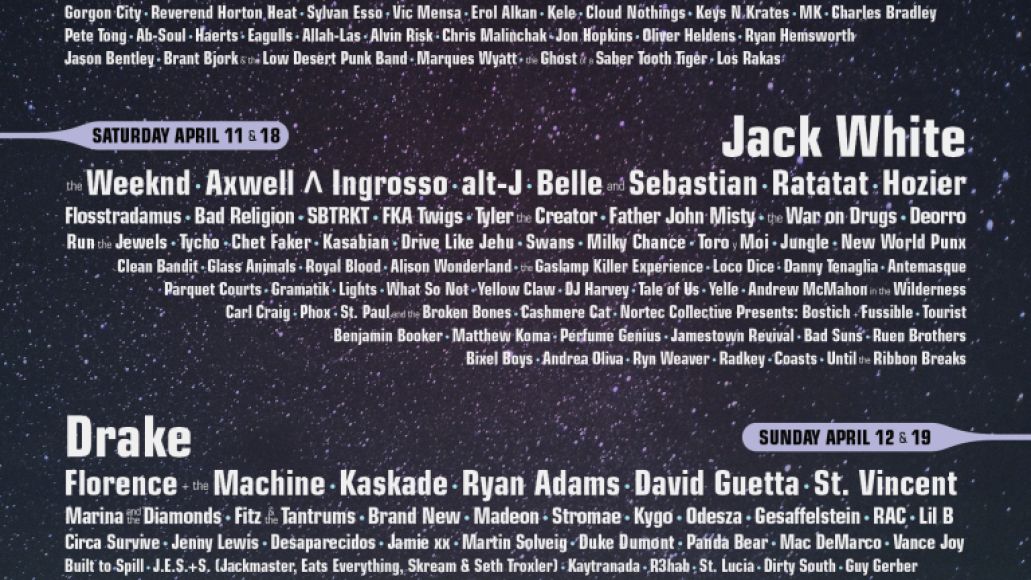 And then there are the ladies. We have Florence and the Machine, St. Vincent, Azealia Banks, Sarah Martin from Belle and Sebastian, Alabama Shakes, Lykke Li, and more occupying prime real estate on the Coachella poster. Yes, there could and should be more women playing, but Coachella continues not to neglect tapping women for their festival. These are only a few of the interesting angles to approach the Coachella lineup. Can we mention emo/pop punk day on Sunday, when Desaparecidos, Brand New, Touche Amore, and Joyce Manor will all play? How about Swans and Charles Bradley, generally considered two of the strongest live acts in the game? We rounded up our biggest hits and misses of the Coachella lineup after a night to sleep on it. Of course, going to the fest (or Couch-ellaing from home) will be the only way to determine whether Paul Tollett came through this year or whether he blew it. See you in April.