The most clever gag in all of Hot Tub Time Machine 2 occurs by happenstance. Lou Dorchen (Rob Corddry), Nick Webber (Craig Robinson), and Jacob Dorchen (Clark Duke) are trying to figure out what year they’ve stumbled into, and so they turn on a television and discover an episode of The Daily Show. A ha, but there’s a twist: Jon Stewart is no longer hosting; instead, Jessica Williams is in the big chair. Timely, right?

Unfortunately, the rest of the film hardly feels that way. It’s one sequel of many in 2015 that’s awkwardly tripped into a release date, hoping to grab a few bucks from the millions that made the original a surprise hit in early 2010. The difference is that John Cusack opted out of this swim, which leaves this film bobbling around without a purpose. Here’s why: With the original, director Steve Pink (Grosse Pointe Blank, High Fidelity) turned what should have been a bullshit, nonsensical comedy into a wryly clever parody of its star’s past resume.

It was meta without overdoing it, embracing heart over cynicism, while poking fun at ’80s classic romps like Better Off Dead…, Weird Science, One Crazy Summer, etc. The film’s asinine premise was overshadowed by an eerily nostalgic performance by Cusack, who looked freshly alive after appearing in a monotonous string of confusing drivel (2012, War, Inc.). And by having him around, the film was able to embrace a little mayhem from its supporting cast, specifically by the diabolical Corddry.

There was also a purposeful style to the film. The throwback soundtrack, featuring everyone from The Replacements to David Bowie, INXS to Talking Heads, The English Beat to Public Enemy, bolstered much of the scenery, adding a charm that whispered a sort classy panache that spoke to Pink’s past strengths. Once the credits hit, it was understood that everyone lived happily ever after and yada, yada, yada. Nobody demanded a sequel, nobody needed one — it was a swift, tasty slice of pop entertainment.

Which is what’s so frustrating about this sequel. Without Cusack, the film attempts to capitalize on what was originally a supporting cast, making the vitriolic Corddry its pulverizing lead. As Lou, he’s an asshole who’s taken his valuable foresight and destroyed his lifestyle with irritating extravagance — try and imagine a strange amalgamation of Steve Jobs and David Lee Roth. He’s gone so far off course that he’s fallen out of favor with Nick and his son Jacob, who are forced to save him when an unsuspecting villain shoots the guy in the genitals at one of his boisterous soirees.

Off they go into the hot tub, which Lou has reconfigured for his own emergency use at his estate, to solve the crime. If you’re already rolling your eyes, you should be; it doesn’t get any better than this, and no, the film doesn’t rise above its own gimmicks. Not even Adam Scott, who plays Cusack’s son in the future, can offer any assurance or direction. His neo-yuppie humor adds a few laughs here and there, but it’s squashed by the sort of malignant and mean-spirited humor that made Dumb and Dumber To so intolerable.

That’s what buries the film. Everyone’s such an asshole to each other and rarely do any of the jabs ever land accordingly. There are some mild attempts at bro-humor in the Apatowian vein, especially with a number of “You look like…” gags, but it’s so vapid and conceited that any supposed friendship feels exceedingly quixotic. But, the characters are just as confused: Halfway in, Jacob throws up his hands, walks away, and starts questioning aloud why he’s going out of his way to help his dickhead father.

It’s a just question and one that neither the film nor the audience can really answer, which is what happens when a story outlives its shelf life and attempts to do something with nothing. That explains why, despite the bevy of talent floating around, Hot Tub Time Machine 2 feels tepid, uninspiring, and comically hollow. It’s about as innocuous and boring as a sequel can get and about as messy and unappealing as a hotel jacuzzi. Okay, that’s enough water puns. 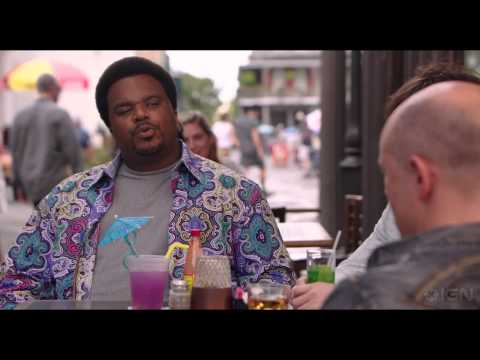