Each year, the benefit show is wildly different — past concerts saw Paul Simon, Lou Reed, and Ray Davies onstage — but one thing remains the same: unexpected collaborations are often rehearsed for the first time mere hours before the performance. That energy buzzes in the air when the musicians walk onstage, and it reasserts itself in nervous laughter in the few seconds of silence following the song’s end.

Like most New York City benefit concerts, the Tibet House benefit can feel like a live-action roleplay of Guess Who. Many members of the audience are just as notable as the performers onstage. It’s a guessing game of whose face belongs to the back of that head inside Carnegie Hall, allowing for exciting reveals when those sitting in front of you turn around. What it does differently from the city’s other benefit concerts, though, is that it balances the field. Once the lights dim and the first artist walks onstage, peace of mind and peace of heart spread over the crowd until all are relaxed and, for three hours, stripped of their social status. Everyone is human and no one is special — and everyone is surprisingly cool with it. 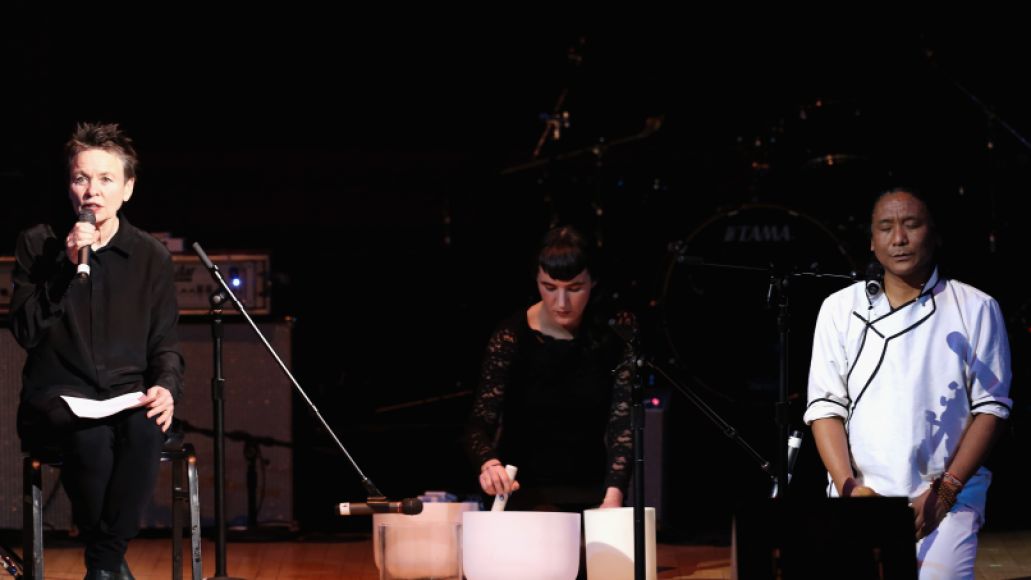 As per tradition, a group of Tibetan Monks from the Drepung Gomang Monastery opened the show with a mesmerizing traditional chant that saw the human voice mimic a didgeridoo with ease. In its opening minutes of thawing, the crowd began to relax. Robert Thurman and Philip Glass stepped onstage immediately after to thank the audience for their generosity, to encourage us to open our hearts in solidarity with the oppressed, and to nod towards the inevitable happy ending of those in Tibet.

Renowned musician and experimental performance artist Laurie Anderson gave the first mesmerizing performance and was the only one whose words stuck with me long after the show. Joined by violinist Martha Mooke, Anderson created beluga whale groans and solemn crescendos on electric violin during “Three Songs”. She explained it was her response to an old teacher’s strenuous challenge to learn how to feel sad without actually being sad. She then closed her set with “Story About a Story”, a spoken-word piece on her time in a children’s burn ward following a horrific pool injury. The more she told of her time in the hospital, the more she realized she was forgetting something: the sounds of children dying. “Every time you tell your story, you forget the real story more and more,” she said. “You forget about everyone else. You only think of you.” Carnegie Hall was still. If there’s one sign of a successful performance, it’s the sphere of silence that floats in the air between the final note and the first applause, the transition period where we regain feeling in our feet and remember the room we’re sitting in that we were momentarily, and subtly, transported out of.

Dev Hynes, aka Blood Orange, stepped up next for a modest set. Pressing his finger down on a single key on the synth, Hynes flashed a polite grin and launched into “Of the World”. The Scorchio Quartet beside him swelled with emotion, supporting his words with the lush consolation of tender bass and dark viola. The soothing tone was broken when he turned to play “Bad Girls”, roping in a saxophonist and speeding up the pace until the room seemed to glitter in synesthetic fashion. 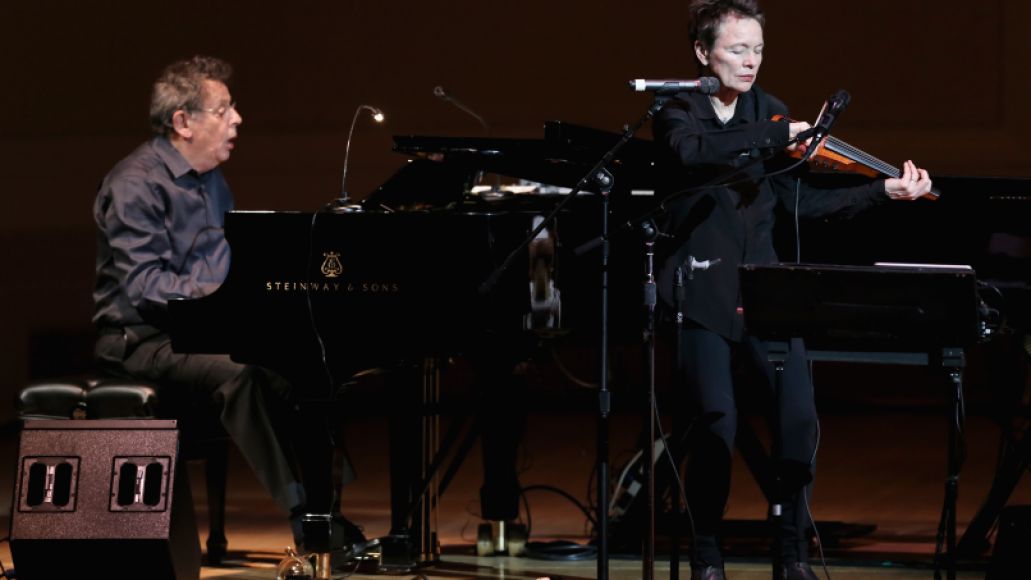 Until this point, most every musician had been donning New York’s traditional all-black garb. Leave it to Canadian roots musician Ashley MacIsaac to stir things up. With a blonde-dyed fro, plaid kilt, zip-up sweatshirt, and enormous sneakers, the fiddler subdued the evening’s highbrow tone, but not before he stunned half the crowd with his ferocious playing. Eight-minute “Miss Lyall’s Medley” saw MacIsaac break numerous strings on his bow. He and pianist Maybelle Chisholm McQueen looked like an after-school lesson gone haywire. By the time MacIsaac was doing a double-time jig across the stage during “Mockingbird Medley”, the audience put aside any preconceived notions based on his apparel and hollered out mid-song. MacIsaac got one of the evening’s loudest applauses for undoubtedly winning everyone’s hearts.

Tenzin Choegyal was the obvious choice to follow MacIsaac. The celebrated Tibetan musician brought a full band out to back him as he created a spirited, community-based, joyful environment on “Jhi Chung” and “Heart Strings” (which nabbed amused laughs for its chorus literally translating to “My mind in the sky / my body on earth / in between I don’t know”). Choegyal’s flooring closing number “Heart Sutra” was the performance that turned Carnegie Hall into a room void of human differences. “Heart Sutra” serves as the Tibetan movement of the dead, where death is seen as a doorway from one life to another and it’s our role to help people go through that door to find a new place to be reborn. That place, Philip Glass explained, is discovered by finding a state of bliss. As Patti Smith’s daughter Jesse Paris ran a stick against the edge of buckets like wine glasses and Laurie Anderson read a calming meditation piece in hushed words, Choegyal belted out his notes. As a whole, we were shown the door.

Grammy-nominated country musician Sturgill Simpson filled the room with a western twang immediately after. His set two-song set felt short, but his ties to the event were clearly strong. Simpson explained the origins of “Just Let Go” as his reactions to reading about Tibetan Buddhism at a young age. Armed with just his guitar, he gave a heartfelt set that charmed many new listeners in the crowd. 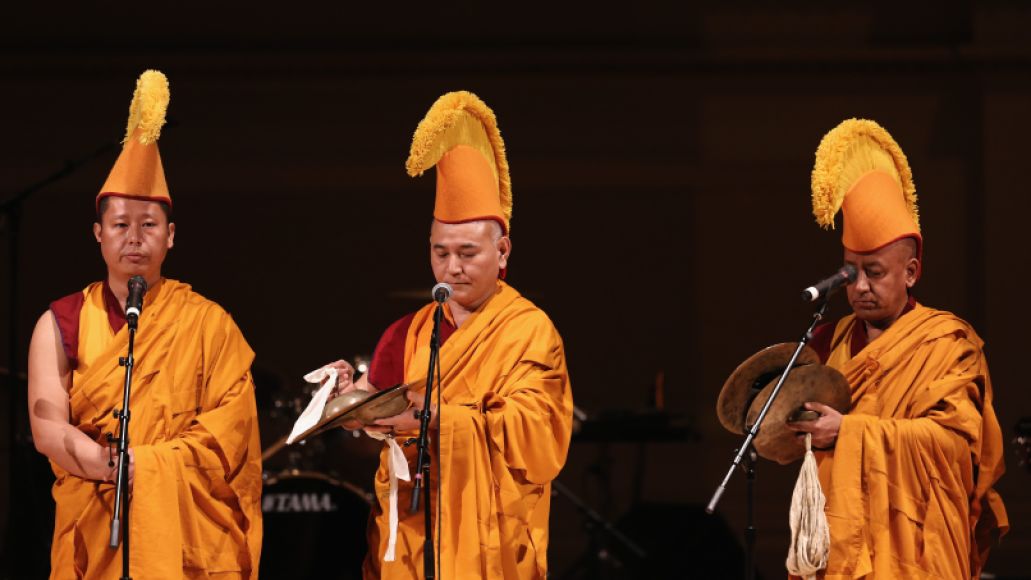 Another of the evening’s chilling performances came from cousins Philip Glass and Ira Glass. The NPR host used his enunciation skills for good, reading Allen Ginsburg’s poem “On the Cremation of Chogyam Trungpa Vidyadhara” with sterile, conducted sharpness, making every word stick. Philip Glass mirrored the poem’s repetition with a titleholder’s ease. The two closed with an enormous, weighted rendition of “Wichita Vortex Sutra”. Philip Glass used to perform the poem with Ginsburg on his tour, but Ira stood in his place, foot arched back behind him, rearing forward, allowing someone else’s words to hurl out of him like a kid blurting out secrets, fears, things he can’t bear to keep inside of himself anymore. Nothing less should have been expected from the evening’s artistic director, but the audience couldn’t help but let their jaws hang and hearts swell. Wisdom and beauty were never so masterfully intertwined.

As with any benefit concert, there were bound to be missteps. Rock ‘n’ Roll Hall of Famer Debbie Harry took two large hand cymbals and crashed right into “Lovelight” and “Rose by Any Name”. While the Blondie frontwoman’s sparkling copper pants recalled her early ‘70s self, her presence didn’t. Harry’s set tilted with awkwardness despite her cheerful attitude. She threw her arms out wide, dancing in a way that suggested she was pushing energy away from herself and onto the audience. Even “Heart of Glass” (which she dedicated to “the top Glass out there, Philip”) saw some smiles through gritted teeth. However, Debbie Harry’s energy and crystal clear vocals made up for the gaps, and the standing ovation at the end of her reminded sour viewers that her best still sounds great.

After speaking to us in depth about love, Wayne Coyne’s giddy attitude made perfect sense onstage. The Flaming Lips threw peace signs left and right while setting up, excitedly stuttering back and forth to the quartet to confirm they were ready to start. Joined by Julianna Barwick, The Flaming Lips reenacted their cover of The Beatles’ “She’s Leaving Home” as well as David Bowie’s “Warsawa” with Philip Glass. Both covers boasted a lucidity enhanced by Barwick’s flawless notes. Coyne repeatedly threw his fist in the air mid-song or grabbed at his chest, so overcome with the love in the room that his inner child was on the verge of squealing. Go figure. 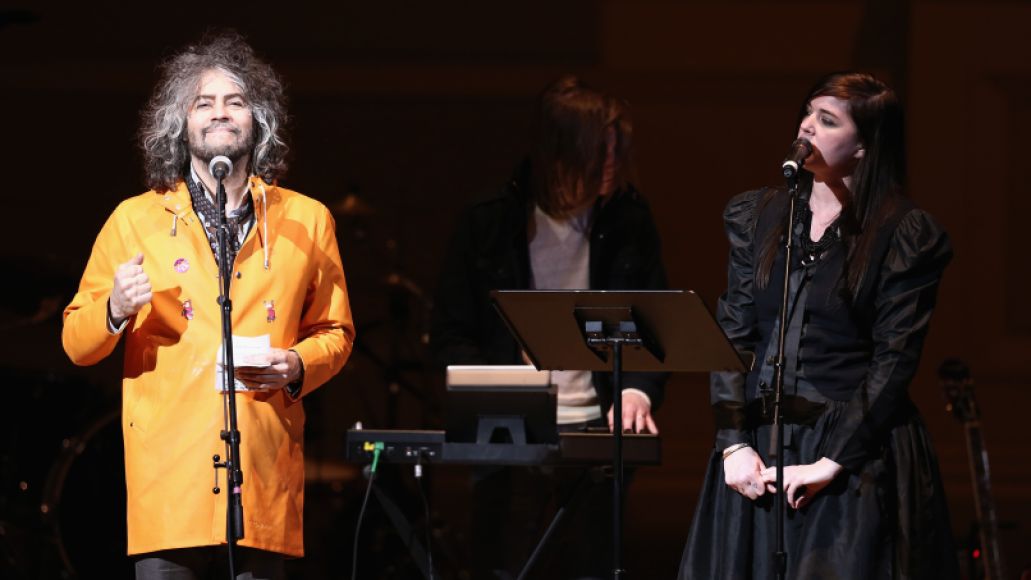 Then came the moment everyone was waiting for: Patti Smith. After a heartfelt reading of “Birthday Poem” in honor of the Dalai Lama, Smith brought her daughter and Her Band onstage for the mammoth groove-laden “Gandhi”. With every verse and pent-up instrumental swell, Smith got more heated, even turning to her side to spit on the stage at one point, the words came out of her so rapidly. After counting off to four, she grabbed the microphone, threw the stand behind her, and started yelling the lines. The more she paced the stage, the more she reminded us why she sits atop that musical throne.

As a Tibet House Benefit Concert tradition, all the artists stormed the stage to perform an abrasive, powerful cover of Smith’s own “People Have the Power”. Anderson held hands with Harry, Hynes had his fists in the air, and Coyne casually brought Miley Cyrus out (she hung around the back in an oversized suit, clearly not wanting to make a fuss). The audience left their seats. People began filling in the aisles. Looking around, a slew of celebrities were noticeable: Uma Thurman, Maggie Gyllenhaal, Peter Sarsgaard. What began as a guessing game of New York City’s elite broke itself down into a pool of artistic equals cheering on Carnegie Hall’s floor in a haze of meditation, love, and wisdom. Refreshed, everyone acted as equals. The Tibet House Benefit Concert uses music’s modern masters to stress community over the self, and on its silver anniversary it once again surpassed its goal. 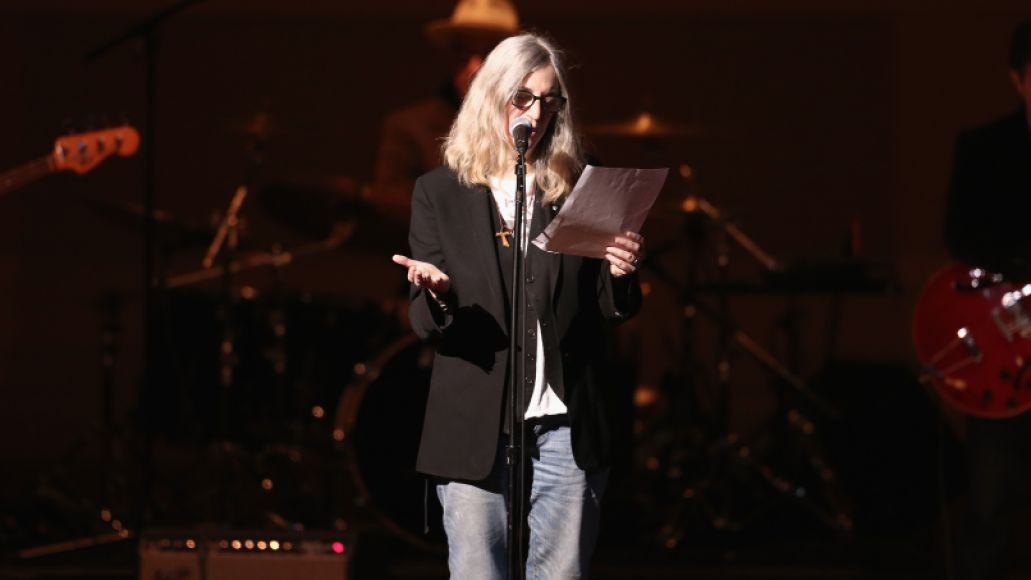