Ex Machina should have been the second film score for Geoff Barrow (Portishead) and Ben Salisbury. The duo was to provide the music for 2012’s underappreciated Dredd only to part ways with the troubled production, taking their music with them. Their unused score led to the release of Drokk: Music Inspired by Mega-City One, leaving fans to wonder how much better Dredd could have been with these Precinct 13-esque compositions.

Though Dredd didn’t work out, Alex Garland (Dredd‘s screenwriter) kept Barrow and Salisbury in mind when deciding on who he wanted to create the mood and music for his directorial debut. The Ex Machina soundtrack is based around pulses, beats, and … music boxes? Yes, music boxes. Consequence of Sound sat down with the two to discuss their writing process as a team, their relationship with Alex Garland, and, of course, the Ex Machina score.

I really like the score, first of all. It does a really good job of creating suspense without overdoing it, if that makes any sense. There aren’t a lot of moments where the strings swell; it’s just kind of a steady beat that happens throughout the movie. Did Alex Garland give you a lot of direction or did he kind of leave you to your own devices?

Geoff Barrow (GB): He trusts us to know instruments and sounds and what’s not good and what’s good. But other than that, it was really collaborative.

Ben Salisbury (BS): He would trust us with the musical language, but he was very, very specific about what he needed the music to do. So he would talk to us in a filmic language: “This is a really important part of the narrative that the music does this.” Then it’s our job to come up with the way we achieve [it]. He trusted us, and then when we had done something he’d obviously have an opinion on that.

GB: I think on every level of the film he’s incredibly hands on, but in a way that everybody’s part of it. He knows what he’s talking about. It’s not like he’s flying in the wind and trying to get a credit on the music score. He does know his stuff.

BS: Alex’s big thing, and it’s totally true, is that it’s a collaborative process, filmmaking. All aspects of it. He’s just sort of desperately trying to make the soup taste OK at the end of the day.

Maybe I’m reaching here, but I hear some Dark Side Pink Floyd rhythms going on. I know you’ve covered Pink Floyd in your past. Who did you look for as an influence when you were coming up with the score?

GB: It was really weird. We didn’t really look at anybody.

GB: Yeah. We had done Drokk, which was the score for Dredd. And that was heavily influenced by Carpenter and Moroder and Tangerine Dream. Even though [the Ex Machina score] was going to be synth and organ, it needed a different approach. You have to be really careful with what we call pads — long chords that are just moody to fit into another slightly more evil chord afterward. It’s a language traditionally done through strings in film music and it can be sort of “how clean is your kitchen?” You have to be really really careful. We had to try and find this class in these pads. Most people wouldn’t recognize it, but we did work really hard.

GB: Because of the route we took, it was very easy to fall into those standards.

BS: And you obviously do. Some of them are standard because they work so well. That was the conscious thing. As Geoff said, there was no wanting to reference the past in what we wanted to try and do. But as writers, you always bring that past with you subconsciously.

At what point did the both of you really realize that the score was working? When did you feel like you were finished with it? Or was it one of those things where you went back and said, “I wish I could tweak that”?

GB: We worked 10 months, and we were doing things right up to the absolutely last 10 minutes of the mixing session. When Ava gets dressed at the end, we had the “Celeste” piece.

GB: That was the first big thing we wrote.

It almost sounds like a music box playing. There’s an innocence about it.

BS: Even though it had been there from the very beginning.

GB: I was particularly unhappy about it. We were right into mixing in 5.1 in our studios in London and we kept having this discussion, and I mean, it was an awful lot of discussions that went round and round and round about the most minute things. I just thought we could do this thing where the theme degrades as you realize that she’s a machine. So we put it through a distortion unit. So yeah, we worked right up until the end.

Was that a steady 10 months straight or were you working on different projects at the same time?

BS: It wasn’t 10 months’ worth of work. The reason we were on it for 10 months is because Alex wanted us to be part of the post-production process from the beginning. Part of that was practical because we were relative newcomers to the game and there were lots of hurdles to cross in that respect, but he also wanted our input as the narrative was being built in the edit suite. The thing we started writing music for is fairly different from the end product, so we were constantly adapting, changing. And yes, we did have some time. Geoff went on a Beak tour; I did one little thing in between. But we were more or less immersed in this thing, in this whole post production process, which was great. It made us feel like we were a crucial part of its narrative journey.

GB: Once you get to figure people out, you realize you are just part of this team and that Alex is interested in what you’ve got to say about the film in general. It’s not “you do the scores, we’ll do this and you go away.” It wasn’t like that.

BS: The vast majority of scores I’ve done previously, it’s literally, “the film is finished, here’s three weeks.” I did a film for Beyonce and that was four weeks. “Here’s the finished film, four weeks, three and a half weeks, do your thing.” And that’s fine and that’s a totally valid way of working as well, but it’s not as satisfying. It’s harder, obviously, but it’s not as satisfying as being immersed in the whole feeling that you’re part of lots of people and it’s all coming together.

This is your first official score. I know you were working on Dredd for a while there, and that you ended up using the unused music from that. Do you see the two of you continuing on and doing more scores in the future?

GB: We’re doing one now. We can’t talk about it at the moment, but we are doing another one.

BS: Yeah, in bits. We’re not full into it but we’ve done some pre-work.

GB: Since the film’s come out, we’ve had a lot of interest. 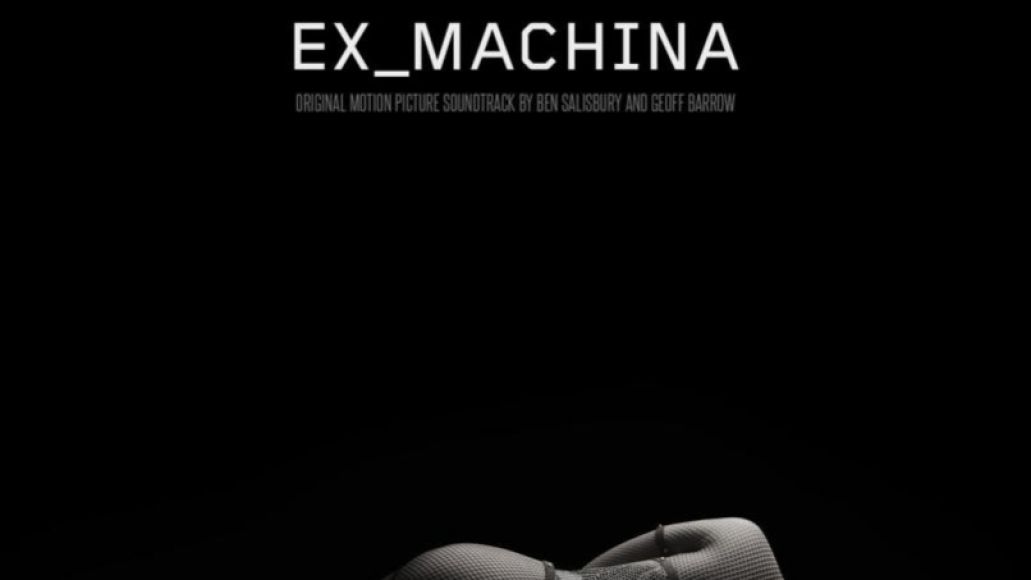 How far along into the production of the film did Alex Garland contact you and ask if you were interested in doing the score?

BS: He sort of said during Dredd, “If another one comes up, let’s go for it.” So we read the script and we got in from the early stages.

GB: I had a random meeting with him in an airport in Norway where I was on tour with Portishead. I was at the bar and I recognized these two guys. They moved over to the table next to us and I looked over and there was Alex. I started making some comments about loud London. We were on it from then on.

BS: I have done collaborative things in the past as well. But before me and Geoff started doing things together, the collaborations had really been because of time constraints. You need two people because there’s so much to do over a short period of time. Some of it’s harder. But it’s better. The music is better. Since I’ve worked with Geoff, I’ve started opening up to doing more collaborations. I’ve done work with Scott Hendy and Malachai. I’ve done an album with him called Dolman. It has definitely changed the way I look at writing music, working with these guys that come from a different area. They think about music differently. I haven’t had the most traditional background, but I’ve had a fairly traditional, classical background. And these guys come at things from a very different perspective and it’s always worth taking note of that perspective. The actual process could be harder, but it’s always worthwhile. One of us might spark an idea or create this block of stone and we’ll both go at it with chisels. Geoff might be better at chiseling the face and I might be better at doing the feet to create this thing. It’s very hands on. We sat in a room together for almost all of the writing.

That was my next question. How do you go about working together on a score like that?

BS: There’s no magic to it. You just sit in a room and you write.

GB: A sound would come up, whatever sound, and we’d both have a go at it. That’s what’s really good about it. Obviously we have our known strengths, like Ben has worked an awful lot with pictures and that’s a massive art form.

BS: Geoff, you come from a very sonics-orientated background. I think a mistake that a lot of composers make is that they don’t care. Their shit filter isn’t high enough sometimes.

GB: When someone goes to a composer and they say, “we want an electronic score,” if they’re not actually from that world, then basically they will do their version of what they’ve heard of electronic music. It’s never going to be the real thing. Guys like myself would listen to that and go, “it’s crap.” But on the other side of it, guys coming from electronic music or bands or whatever think oh yeah, that guy’s just got out of the car, I’ll play this sound. It’s not telling the correct story at the right time or the right place. We’re lucky that together we can do both.

BS: We both could do each other’s jobs to a degree, but the other person helps massively.

GB: That’s just what we rely on, at the moment. It’s a massive learning curve.

Breathing Machines: An Interview with Geoff Barrow and Ben Salisbury