This editorial originally ran in June 2015 for the film’s 40th anniversary.

It’s no secret that one of Jaws’ greatest strengths is that we don’t get a good look at the antagonistic shark until the third act. You know the story. The thing kept malfunctioning and forced Steven Spielberg to find creative ways to represent the monstrous fish (affectionately dubbed “Bruce” by the cast and crew in honor of Spielberg’s lawyer) without actually showing it: the ominous theme music, lots of POV shots, yellow floatation barrels, the wreckage of a collapsed dock. It was accidentally Hitchcockian, a word that now seems more associated with Spielberg than Hitchcock himself.

But let’s be honest: After the big reveal, we actually do see the leviathan quite a bit and from many different angles. There are the frequent head shots whenever Bruce pops his snout out of the water, the actual shark footage to depict the beast underwater, and the grand finale where the shark breaches itself onto the stern of the Orca. Granted, this all occurs in the last third of the movie, but Jaws, Hitchcockian as it is, ends up delivering a whole lotta shark by the time Chief Brody and Matt Hooper paddle back to the safety of the beach. With the film turning 45 this Saturday, we think it’s the perfect time to give Bruce’s physical appearance the spotlight it deserves. 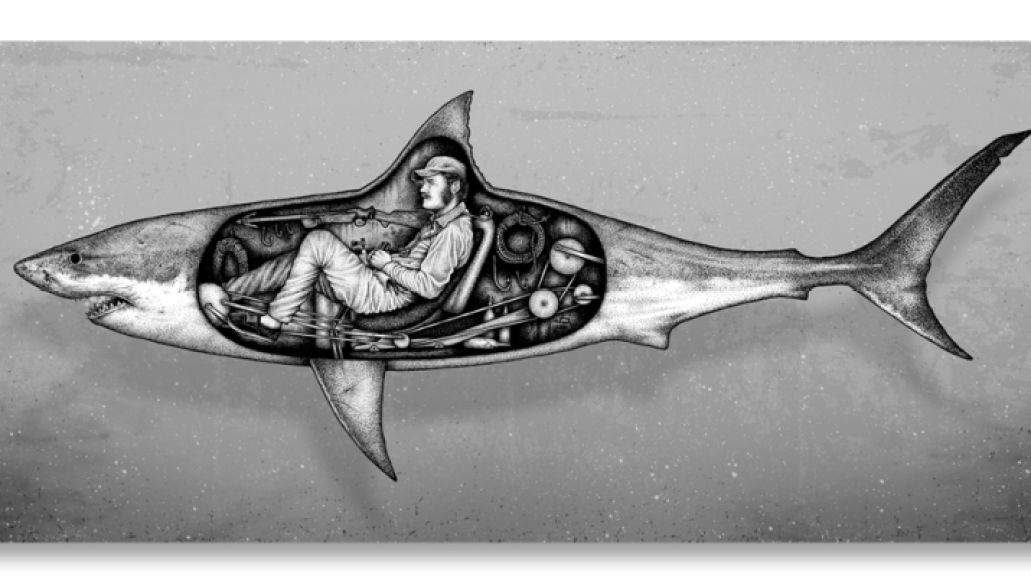 First off, the mechanical shark doesn’t look real. At all. That’s not a knock against Art Director Joe Alves, whose animatronics were revolutionary back in 1975 and still hold up in their own special way. It’s just that when stacked up against an actual great white shark, Bruce is slower, fatter, clunkier, and, if we’re being fair to shark conservation, meaner. While there’s the obvious difference in size — most great whites don’t measure up to the 25-foot length of the one in the film — the most prominent inaccuracy resides in, ironically enough, the jaws.

The jaws of a real great white shark aren’t attached to the rest of its head. Instead, they’re an entirely separate muscle that makes for a weaker bite than most people believe. To give you some perspective, the significantly smaller bull shark has the strongest bite force of any shark, and the saltwater crocodile has the strongest bite of any animal in the world — more than six times that of a great white. 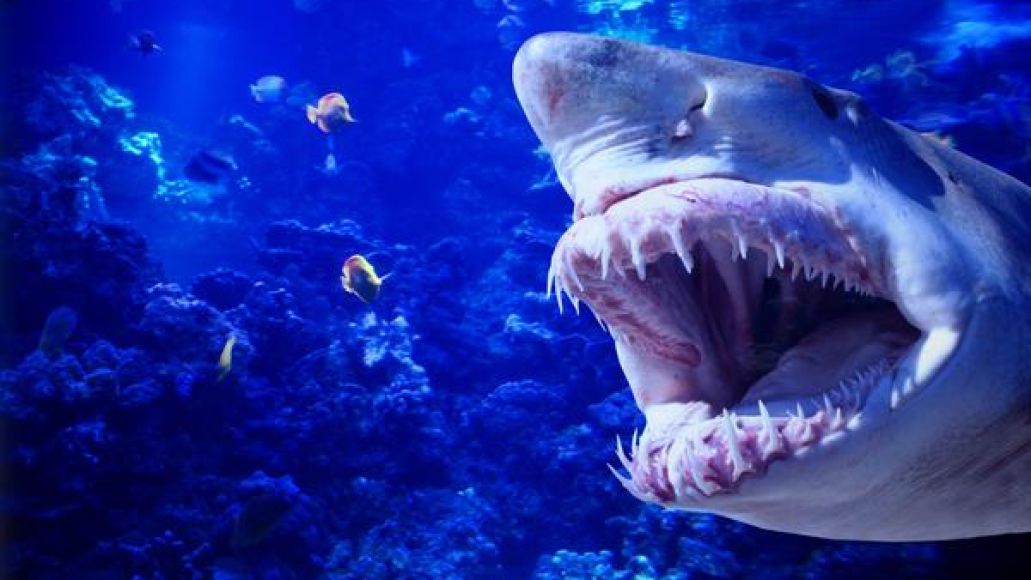 But the detachable jaws also give the shark more range of power when hunting. If a great white wants to gauge the appeal of its prey, it can give a soft(ish) test bite. If the animal is tasty, it goes in for the stronger “kill” bite. Many shark attack victims survive because they’ve been grazed by a test bite, which prompted the shark to swim away in search of something more blubbery, like a seal.

Since a great white’s jaws almost act like their own organism, a specimen looks much different when it’s attacking something. The flesh around its mouth rolls back, exposing the massive jaw muscle and giving it a far more horrific appearance than its usual sly smile.

In Jaws, we get no such differentiation. Because of the shark’s mechanical limitations, it’s never able to fully reveal its separate jaw muscle. Instead, it just chomps and chomps like it’s in a game of Hungry Hungry Hippos, repeatedly snapping its teeth together in the same pattern rather than expanding its mouth. Check out this grisly scene of Quint getting devoured for a prime example of its oral bluntness:

Whereas Bruce merely knows how to gnaw its jaws up and down on Quint’s abdomen, a real great white would be able to latch on to the hapless shark hunter and jostle him back and forth like a dog toy or, to quote a newspaper’s account of the first documented shark attacks in US history (and a direct inspiration for Peter Benchley’s novel), shake him “like a terrier shakes a rat.” Just look at how one feisty fish goes to town on this inflatable boat.

In addition to the markedly different movement of Bruce’s jaws, there’s also their appearance. Because the top and bottom of an actual great white’s jaws aren’t separated, but part of one giant mass of muscle and bone, there isn’t a pronounced line between its upper and lower sets of teeth. In Bruce’s case, though, you can see that the jaws are split into two distinct halves, resulting in a bold line that divides them. Every time the big guy takes a bite, the halves squish together, as if the shark is being puppeteered (which it kind of is).

Outside of the freakishly large size (fat head, fat body, fat everything) and workmanlike jaws, Bruce’s other prominent physical difference comes in his fins. A regular shark’s fins are made of ceratotrichia, filaments of elastic protein that allow the dorsal and caudal fins to move back and forth when swimming, zig-zagging through the water like a rudder. Bruce’s fins have no such flexibility. He only swims in a straight line, his first dorsal fin a monolithic triangle that hints at the equally bulky creature below. And that’s the scientific fallacy of Bruce in a nutshell: a lack of mobility. If a real great white is a honing missile, able to deftly recalibrate its path depending on the movement of its prey, Bruce is more like a battering ram. 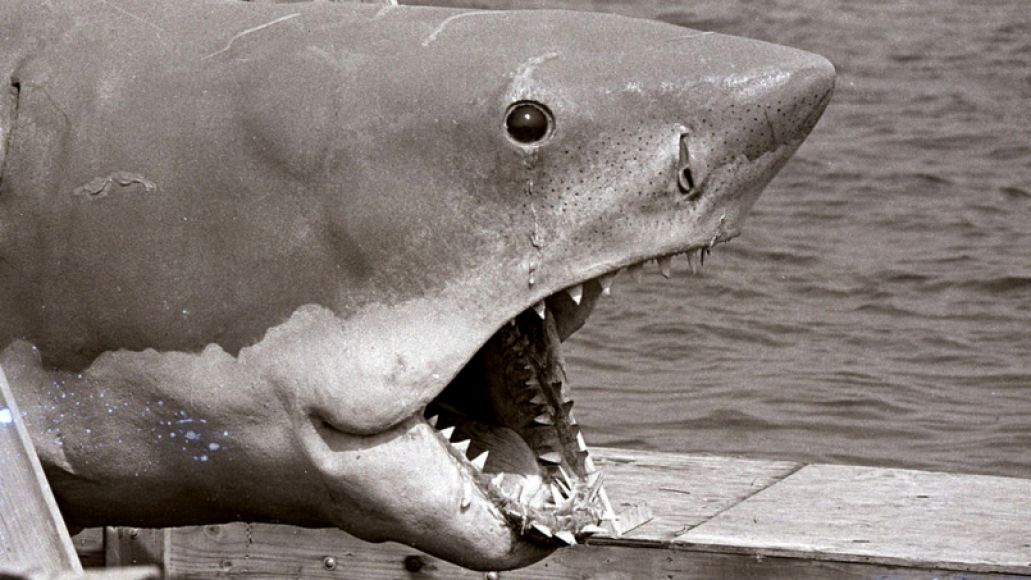 But like I said, these inaccuracies end up enhancing the horror of the film rather than detracting from it. The villain of Jaws shouldn’t move like other sharks because it’s not like other sharks. Contrary to popular belief (at least in the ’70s), most sharks don’t embark on an insatiable quest to consume as many humans as possible. The shark in Jaws, on the other hand, is a machine (Richard Dreyfuss’ Matt Hooper even uses that exact term when describing it), a singularly minded entity not unlike Michael Myers from Halloween, the T-800 from The Terminator, or Anton Chigurh from No Country for Old Men.

All of these antagonists are predatory approximations of normal human beings — stronger, colder, and more instinctual than the real McCoy. Because the shark in Jaws possesses these same machine-like traits, it has a darker, more alien quality to it than an actual great white. Like The Terminator prowling a nightclub or Chigurh entering a gas station, Bruce doesn’t look quite right in his environment. He’s robotic, yes, but it would be just as scary to be trapped in the water with a robot shark as it would an actual shark. It would probably be scarier.

For proof of which version of the fish produces more nightmare fuel, look no further than Jaws’ iconic underwater sequence, when Hooper squares off against the apex predator in an expensive yet ultimately useless shark cage.

Once Hooper is submerged, he sees the shark coming at him from a distance. This time, we’re seeing an actual specimen filmed by shark experts Ron and Valerie Taylor. The real-life fish’s movement and silhouette are ghostlike, more phantom than clunky cyborg. It swims past Hooper and seemingly de-pixelates into the depths. As someone who’s viewed great whites from a shark cage, I can attest that this is accurate — there’s a majesty to the creatures as they glide past you, so peaceful that it’s hard to imagine them attacking anything with the animalistic fury for which they’re known.

But in the very next shot, the shark reappears as a hulking animatronic to ram Hooper’s cage, its head squarer, its movement rougher, its force more relentless. As the sequence continues and Hooper narrowly escapes the crushed enclosure with his life, the footage toggles back and forth between real shark and mechanical shark, snapping from gorgeous to terrifying several times in just a few frames. The dichotomy isn’t jarring — the constant shifting of appearances gives the sequence a surreal, nightmarish quality — but it’s certainly a testament to which version of the beast is more viscerally unsettling, and more in line with the shark’s darkly prophetic treatment in the film. 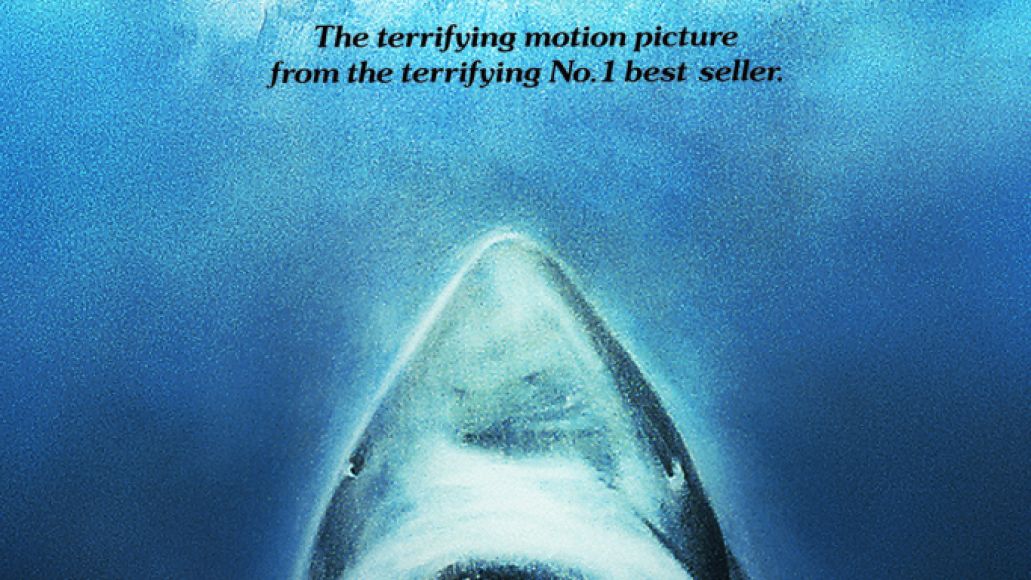 Let’s not forget that this is an animal whose presence eclipses the livelihood of an entire town. Benchley even pops up as a news reporter to remind us that there’s a cloud looming over Amity, “a cloud in the shape of a killer shark.” Although the line reads like purple journalism, it also accurately describes the villain of Jaws — a great white that, thanks to its complete lack of elegance and complexity, becomes a true force of nature.

Steven Spielberg's Jaws Turns 45: Why Bruce the Fake Shark Adds to the Horror