The Rolling Stones have been a nostalgia act since before I was even born. Last night in Milwaukee, they played just one song released during my lifetime, “Doom and Gloom” from 2012’s GRRR!. This would have been true for anyone aged 35 and under, could they have afforded the average $850 resale price for a single ticket. But is the biggest rock band in the world worth the top dollar they command?

Their current Zip Code tour (named in reference to the band’s recently reissued Sticky Fingers, whose original 1971 vinyl packaging included a working fly zipper) skipped over New York, Los Angeles, and Chicago in favor of smaller markets—or at least ones that could muster up the multi-million dollar pay day. The addition of a San Diego date to kick off the tour was made only after a millionaire submitted a profitable business plan. Last night’s show took over Summerfest’s Marcus Amphitheatre, certainly not preferable to the city’s Miller Park (speculation is that the baseball stadium might have hosted the Stones, though the required three-day stage setup would have interfered with Brewers dates), but the 23,000 in attendance paid no mind to the lackluster venue thanks to the picturesque summer evening. 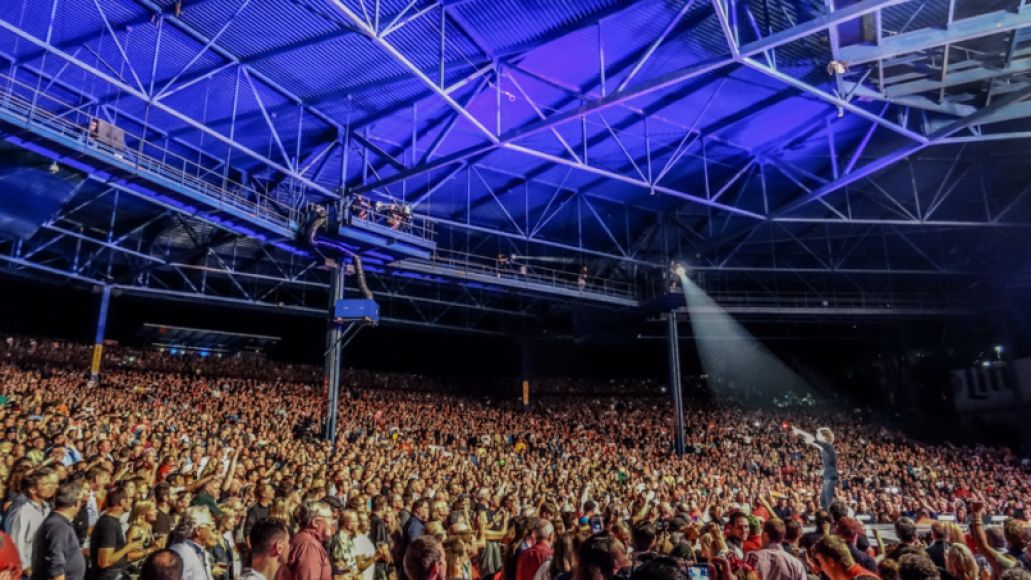 Opening with a near false start of “Jumpin’ Jack Flash”, frontman Mick Jagger looked for a moment as though he considered retreating backstage for a mulligan. While the band briefly muddled on, he instead strutted to the center of the catwalk, waving and wiggling his arms while commanding everything to quickly fall into place. Guitarist Keith Richards set in mingling along the edge of the stage, brushing his guitar and pointing out fans in the crowd. Guitarist Ronnie Wood grinned and cavorted—always with a cigarette in hand, while drummer Charlie Watts sat focused, driving.

After dedicating “Moonlight Mile” to Milwaukee’s own Liberace, Jagger hummed a few bars of Jerry Lee Lewis’ “What Made Milwaukee Famous” before declaring the band took a Badger bus stocked with brats and Miller Lites to the gig and vowing to return to run in a Brewers sausage race. While these well placed local references won over the mostly older, Wisconsin-based crowd, they weren’t nearly as exciting as hearing Paul McCartney recount tales of Hendrix and Clapton, or as enlightening as Robert Plant’s ruminations. 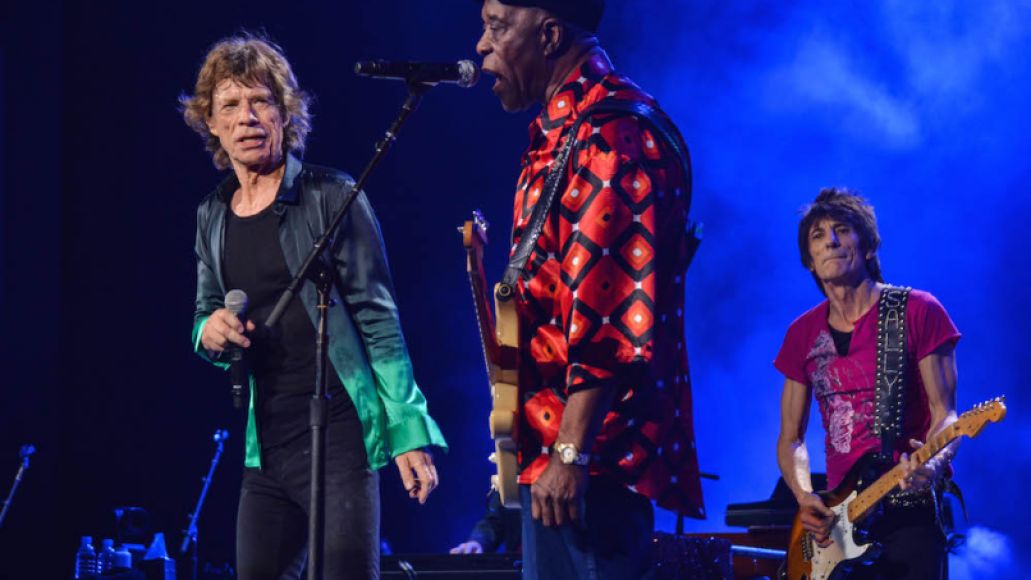 Opener Buddy Guy’s guest spot on “Champagne & Reefer” — the Muddy Waters song he previously joined the band with for Martin Scorsese’s 2008 concert film Shine A Light — made for an early highlight that seemed to even further energize Wood for the show’s latter half. For the “By Request…” portion of the night, fans voted amongst five songs selected by the band, not currently on the set list. Milwaukee made the fine choice of “Doo Doo Doo Doo Doo (Heartbreaker)”—notable since it hadn’t been played since July 2007. A safer take than Bruce Springsteen, who nightly invites fans to stump his band with obscure requests on signs during the show.

Richards took over during the set’s midsection, proclaiming, “It’s good to be anywhere, but good to see you guys again,” with an air befitting Captain Jack Sparrow’s father, before presenting his own penned “Before They Make Me Run” and “Happy”. Jagger returned to note the first time the Stones played Milwaukee was in 1964, at what’s currently known as the Milwaukee Theatre, but his reminiscing stopped there before flowing into “Miss You”, appropriate as it was their first time playing the city in just shy of a decade. 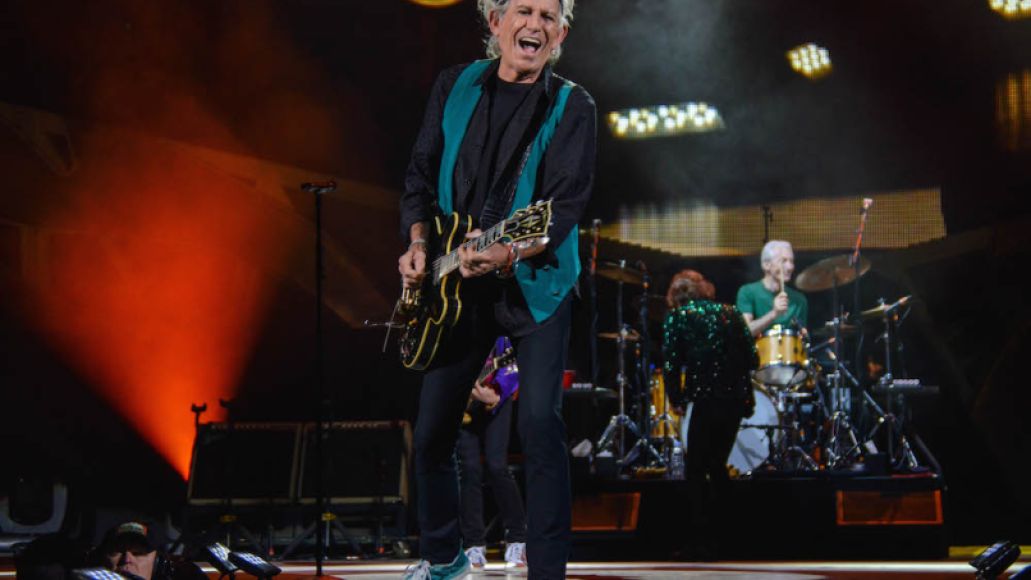 Almost every song featured an extended breakdown, which felt unnecessary; parsing these down to include “Wild Horses”, “Paint it Black”, or “Under My Thumb” would have made for a more balanced setlist. By the time “Start Me Up” made a fashionably late appearance 14 songs into the set, it made for a needed adrenaline boost for Richards before Jagger slinked out in a furry red cape to entice the crowd with “Sympathy for the Devil”.

The all-too-quick encore included “You Can’t Always Get What You Want” with the The University of Wisconsin Milwaukee Concert Chorale, whose excitement made for one of the most genuine moments of the evening, before the Stones closed the show with their first number one hit, 1965’s “(I Can’t Get No) Satisfaction.” 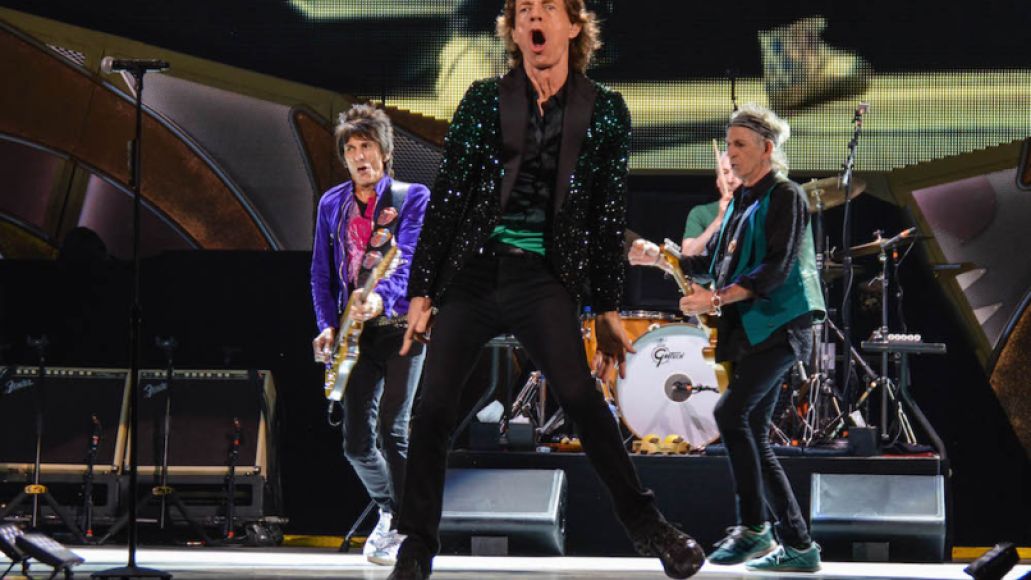 Playing a total of 19 songs over two hours and 10 minutes, the Stones only briefly matched their legendary contemporaries, but still the only satisfaction that seemed to go un-had was that of fans who unfortunately couldn’t dream of attending the steeply priced event.

Setlist:
Jumpin’ Jack Flash
It’s Only Rock ‘n’ Roll (But I Like It)
Tumbling Dice
Doom and Gloom
Can’t You Hear Me Knocking
Moonlight Mile
Champagne & Reefer (Muddy Waters cover) (with Buddy Guy)
Doo Doo Doo Doo Doo (Heartbreaker)
Honky Tonk Women
Before They Make Me Run
Happy
Midnight Rambler
Miss You
Gimme Shelter
Start Me Up
Sympathy for the Devil
Brown Sugar
Encore:
You Can’t Always Get What You Want (with The University of Wisconsin Milwaukee Concert Chorale)
(I Can’t Get No) Satisfaction