Blockbuster Month is celebrating the true titans of the genre. In the weeks ahead, you’ll read through a variety of features digging deep into the greatest hits of Hollywood, from popcorn classics to underrated gems. Today, we time travel with Editor-in-Chief Michael Roffman to his 2015 reflection on Back to the Future for the film’s 35th anniversary.

“Don’t need no credit card to ride this train…”

It’s Summer of 1990: I’m less than six years old and watching my father comfortably drive his pewter BMW 535. The two of us are heading straight up the Florida Turnpike, and we’re about an hour outside of Universal Studios Orlando. Endless concrete, starved grass, and the occasional palm tree race by as the cassette deck blasts side one of my beloved Back to the Future soundtrack. (At the time, it was the only album I owned that didn’t belong to my parents.) As the raging synths of Huey Lewis and the News’ “The Power of Love” dies out, the tape unnaturally welcomes the eerie lounge pop of Lyndsey Buckingham’s bummer jam, “Time Bomb Town”. This is my least favorite song of the collection.

“Skip it,” my father suggests.

My finger punches the magical skip button, and after a few seconds of scribbling noise, The Outtatime Orchestra starts to soar with the film’s iconic theme. About 30 seconds in, I’m feeling real antsy and excited, so I turn to my father and suggest a dumb idea: “Let’s go 88 mph!” Looking around and consulting his trusty radar detector, he accelerates and rockets down the desolate highway, telling me to watch the speedometer. As expected, the needle quickly swings past 80, and he settles just below 90. “There you go, Mike,” he says. “88.8 miles per hour.” What happens next is simple: I applaud in excitement, close my eyes like Marty McFly, and then everything dissipates at once — both sound and speed.

No, not the Libyans, but the Florida Highway Patrol. Everything goes quiet, with the exception of the occasional car whizzing past us, as the young patrolman makes his way to our window. Worried yet still fueled with adrenaline, I sit patiently in the passenger seat, watching the two of them do their little dance: “Sorry, officer,” license, registration, that whole thing. To our surprise, the cop’s a reasonable man and hears us out. My father explains what happened, going so far as to cite Back to the Future, to which I hold up the cassette and smile. To this day, I’ll never forget the guy’s laugh. Smiling, he waves us off and wishes us well on our trip. The two of us can’t stop cheering as Eric Clapton insists that “heaven is just one step away…”

My youth was littered with pop culture obsessions — from Teenage Mutant Ninja Turtles to The Real Ghostbusters, Star Wars to Indiana Jones, Batman to Spider-Man, and even early ’90s blockbusters like Robin Hood: Prince of Thieves or Jurassic Park. What separated the bunch from Back to the Future was the culture that surrounded each phenomenon. At the most basic level was the respective merchandising, which, for Robert Zemeckis’ time-traveling trilogy, was minimal if not non-existent. Save for a couple of truly awful NES games, a few DeLorean model kits, and some cheap Happy Meal toys (based on the animated series, no less), there wasn’t much to celebrate outside of the three films. That, in turn, would be a saving grace to its legacy.

Because there were only the films to behold, my imagination bypassed tangible things like toys and comics and latched on to more practical elements like character, story, and even science. What started out as a gift — a brand-new VHS tape of the 1985 original that slowly eroded over time — became a full-on religion, specifically towards Marty McFly. If there was anyone in the world I aspired to be, it was him. The way he dressed, the music he played, the wild heroics he pulled off … there was nothing about his character that I didn’t subscribe to in some way or another. He’s the reason I took on skateboarding and likely why I was never a member of the obligatory He-Man Woman Haters Club that so many young boys feel compelled to join.

I wanted to find my own Jennifer Parker. I wanted to be my own slacker loner. I wanted to use my own skateboard to ride behind cars. This ridiculous inclination ultimately led to a number of successes and failures. For one, it was quite clear no girl wanted to date in the third grade, which sort of nixed my chances years later when they did. Second, without a faithful Doctor Emmett Brown to kick ideas around with, being a loner sucks when you’re in grade school. And no, riding behind a UPS truck is not a good idea, as I learned one afternoon when I went flying off the back of the brown beast and into my neighbor’s yard with skinned knees and pebbled palms. “You’re not Marty McFly,” my mother said, following a panicked call from Mrs. Nelson.

“You really think I ought to swear?”

Amber sunlight burns through the blinds of a South Florida living room — Ryan Carr’s house. The two of us are nursing cans of soda — likely Pepsi, go figure — while scribbling notes on wrinkled pads of paper. On the television, Biff Tannen is berating George McFly about Lite beer and giving him guff about an assignment due at work. Marty watches from behind a bowl of candy, burning with anger that his father’s car is wrecked … totaled. Neither of us has seen the film in years, so we’re both in stitches as we repeat our respective lines. In a few days, we’ll be acting out a condensed version of the film in front of 15 other aspiring actors and actresses, all of whom make up our small, intimate high school forensics class.

“Jesus, I forgot how funny this is,” Ryan shakes his head in hysterics. “Fucking hilarious.”

“It’s like every line counts,” I add. “It’s going to be impossible to cut this down to 15 minutes.”

We’re about a few weeks away from wrapping up our sophomore year. (A slice of life that I still consider to be my worst.) At this point, Ryan and I have only hung out a few times, but over the next 90 minutes, we find a divine connection as we spit out line after line from the film. He’s tall, lanky, and his hair suggests that he should probably play Marty, so he does. Me? I grab Biff, George, and Doc, which we agree is fair given how many scenes feature Marty, which is pretty much all of them. He cleans up by nabbing lines for Lorraine, Strickland, and, if I recall, physical cues for Einstein. I should be panicking, I should be sweating up a storm, but there’s something reassuring about the material.

“Did he say ‘Planet Fuckin’?” Ryan asks as Marty terrifies his father using his radiation suit and Van Halen. We both laugh and rewind it again and again until I concede and say, “No, no, no, it’s Vulcan.” This sort of back-and-forth continues for another hour until Doc returns from the future, whisking Jennifer and Marty away into the great beyond as Huey’s “Back in Time” fills the lofty room. Outside, the sun has shifted, and the leaves are a boiling gold. “We should be outside, right?” I suggest. “It’s fucking Saturday.” I don’t actually believe that, but I think it’s the right thing to say because, well, Ryan looks athletic, and there’s no way he’d rather be inside watching an old movie like Back to the Future. “No way dude,” he protests. “Movie rules.”

I’m pretty sure we watched the film like 20 more times that summer.

“Look, you’re not gonna be picking a fight, Dad … Dad-Dad-Daddy-O.”

It’s funny how pop culture works. Blame it on the Internet or three decades of endless references and homages, but the culture behind Back to the Future is louder than ever. Everything my six-year-old self could have ever wanted — video games, action figures, movie prop replicas, Hill Valley recreations IRL — has come to fruition. Naturally, because I can’t stop … won’t stop being a child at heart, I’ve enjoyed a few with restrained enthusiasm, but my interest in the film has evolved dramatically — or, shall I say, my obsession. Today, the idea of being Marty McFly makes zero sense to me, and although the technology and science behind the film still has me wasting eight hours of my life gushing via text, the series has taken on a new meaning.

This is something I only realized a few months ago. Back in April, Chicago’s Music Box Theatre ran a mini-marathon that featured both Back to the Future and Back to the Future Part II. (Don’t ask me why they skipped the cruelly underrated Part III, which also celebrates an anniversary this year. Oh well.) As always, I marveled at the shiny innovations, laughed at Thomas F. Wilson’s bullish posturing, tapped my feet during the Enchantment Under the Sea Dance, and predictably applauded when Doc celebrates over the burning tire tracks immediately following his unlicensed “weather experiment.” But what really struck me harder than ever this time around was the relationship between Marty and his troubled father George McFly.

Particularly, the peaceful three-minute scene in George’s backyard, where the two young men are simply folding laundry and discussing their plans to win over Lorraine Banes. To some, it might seem like a forgettable moment, yet it’s awfully compelling (even novel) when you actually break it down. Here, Marty assumes a benevolent, patriarchal role for his own father, offering words of wisdom that undoubtedly never came from George’s mouth back in 1985. It’s all so subtle and yet also endearing, echoing William Wordsworth’s insightful 19th century poem, “My Heart Leaps Up”, in which he wrote: “The Child is father of the Man.” As someone who’s only now understanding what that means in life — my father’s a graying 67, I’m a sobering 30, we both depend on one another — the scene hit hard. 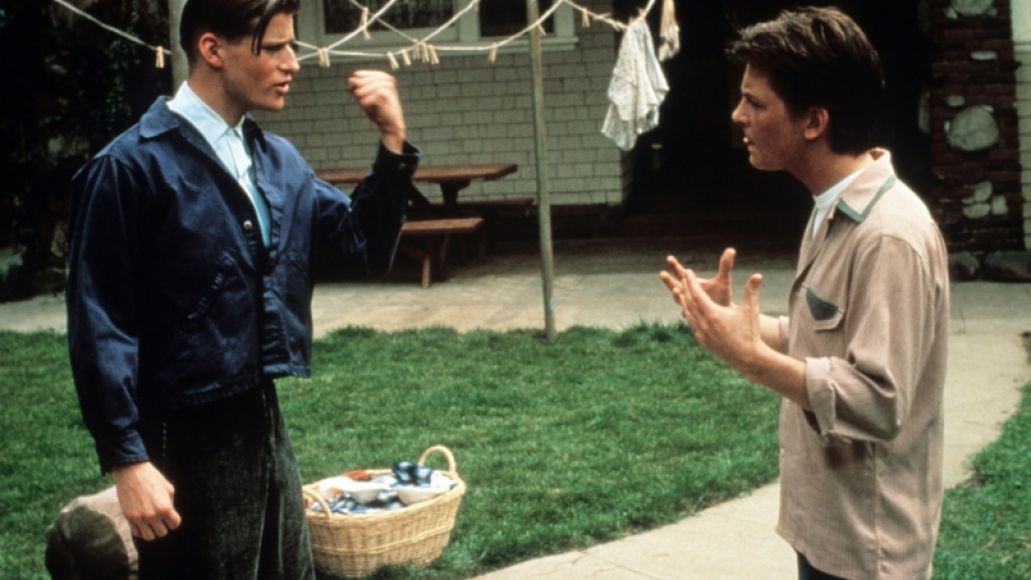 A good film entertains, a great film evolves, and Back to the Future succeeds on both counts. Look, I’ll be the first one to admit that these breezy memoirs are little more than peripheral memories, some of which have been ricocheting across a brain far too tainted by years of celluloid worship. Yet what they might suggest, and what I at least hope they infer, is that there is an uncanny and timeless wonder to Back to the Future, one that’s perhaps superior and ubiquitous over the other Universal and Steven Spielberg-endorsed exports this film’s been lumped against over time.

Back to the Future is so many things to so many different people. It’s a brilliant comedy, it’s a sentimental love story, it’s a tale of remarkable triumph, it’s a stylish sci-fi adventure, it’s a perverted commentary on the American nuclear family … it’s a haunting and biting parable on the spoils of Reaganomics. Okay, that last one’s debatable. (Unless, of course, you’re Crispin Glover.) Whatever the case, this sucker’s nuclear with thematic dimensions that could keep fans, scholars, and writers talking for a large chunk of the space-time continuum. So, who’s responsible for this? Who should we credit?

Point toward Zemeckis and Dean Cundey’s vivid portraits, or Bob Gale’s diamond script, or Alan Silvestri’s rousing scores, or Industrial Light and Magic’s revolutionary fireworks, or the once-in-a-lifetime chemistry between Michael J. Fox and Christopher Lloyd … you’d be smart to pick either. You’d also be wrong, and here’s why: Sometimes, and this is very rare, everything just clicks together to create something bigger than either party ever intended. That’s the fundamental beauty of Back to the Future, and that’s why I’ll likely have a dozen more memories to share 30 years from now.