By this time, the whole “Dave of Thrones” moniker is already a cliché. Thanks to the Internet, surely everyone (who cares) is aware that Dave Grohl managed to get back in the Foo Fighters saddle on the Fourth of July with a broken leg – sustained after falling off the stage at the beginning of the band’s June 12 show in Gothenburg, Sweden – by playing most of the set at Washington, D.C.’s RFK Stadium sitting on an enormous motorized chair that strongly resembled the iconic Iron Throne featured in HBO’s Game of Thrones, only with myriad guitar necks and moving lights sprouting from it instead of razor-sharp daggers and swords.

“I would never, ever have cancelled this show,” he declared after tearing through opening cuts “Everlong” and “Monkey Wrench”. “This is the one! This is the ONE!”

By all rights, it should’ve been. On top of celebrating Independence Day in the nation’s capital – also the city Grohl considers to be his hometown, though that’s actually 30 minutes down the road in Springfield, VA – the gig marked the 20th anniversary of Foos’ career (their self-titled full-length debut dropped July 4, 1995). Additionally, the bill showcased a slew of (mostly) legendary opening acts featured on episodes of Grohl’s acclaimed Sonic Highways documentary series, culminating into what was essentially one of the more impressive one-day festival lineups in recent memory. 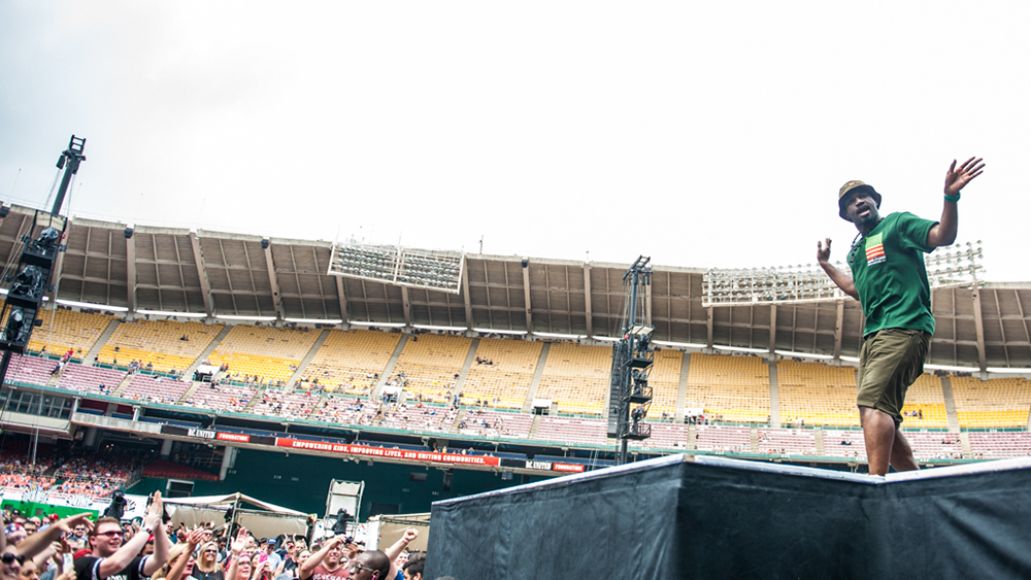 Appropriately, the music kicked off around 1:30 p.m. with Virginia natives RDGLDGRN, whose 2013 debut album featured Grohl’s drumming on every track but one. His assistance on the skins, though obviously impossible this day, might’ve helped to amp up the noticeably scarce earlybird crowd. The outfit’s “indie go-go” style on tracks like “I Love Lamp” and “Power Ups” is supposedly a hallmark of the D.C. scene, but this crowd didn’t get it (neither did I). Next up, Trombone Shorty and Orleans Avenue fared much better. Fans went from inert to hollering wildly as the NOLA group unleashed its winning mix of heavy brass, highly danceable grooves, and band leader Troy Andrews’ mightily soulful singing on key tracks like “The Craziest Thing” and “On Your Way Down”, plus recognizable pseudo-covers laced with solos aplenty of Green Day’s “Brain Stew”, Limp Bizkit’s “Rollin’”, and Big Tymers’ “Get Your Roll On.”

But diehard Foos’ fans are generally partial to loud-as-fuck rock music, which is why Joan Jett and the Blackhearts’ following parade of hard-hitting classics sparked the biggest surge toward the stage all day. I’ve seen the 56-year-old rocker turn in relatively apathetic performances recently – this wasn’t one of them. Looking like a veritable Fourth of July firecracker in her sparkling red-sequin jumpsuit, Jett shredded and snarled her way through set bookends “Bad Reputation” and “I Hate Myself For Loving You”, the Runaways’ “Cherry Bomb” and “You Drive Me Wild”, and 2013 Grohl collabo “Any Weather”. All the while, her fearlessness shone through a wily grin and sly stare thrown in the direction of any fan that looked her way. 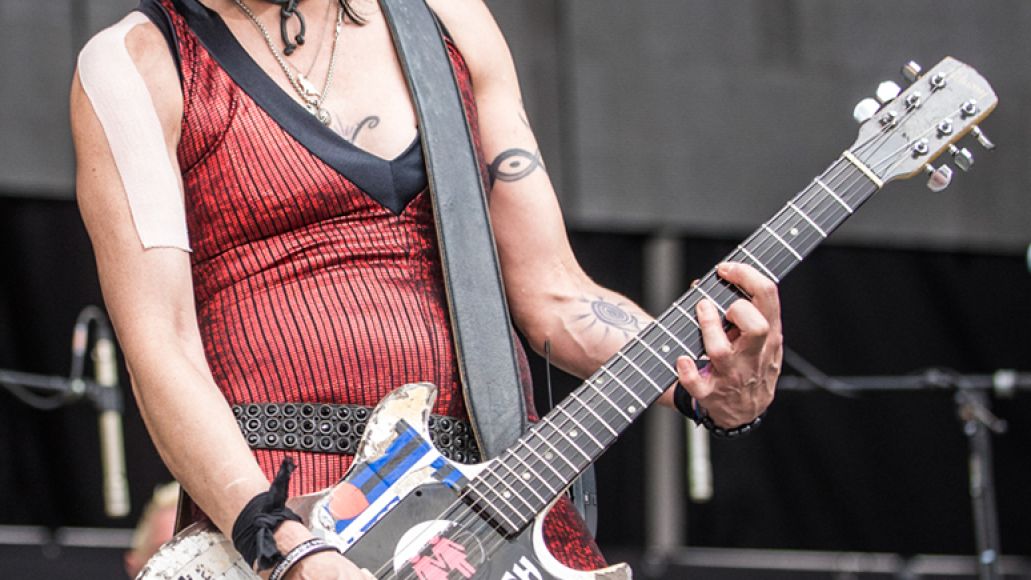 At this point, it bears mentioning that one of the most ingenious facets of this bash was its rotating stage (a page borrowed from KROQ’s handbook for their seasonal Weenie Roast and Almost Acoustic Christmas concerts). When one set ended, a circular platform with a wall down the middle spun around and – voila! – the next act fired it up. No waiting, no soundcheck fuss – everybody was constantly entertained. Unless the stage doesn’t rotate, and instead a hefty bald guy emerges to tell you lightning storms are on the way and it’s time to evacuate the field. Yeah, rain is a literal damper, but being forced to vacate the spot you’ve staked out for hours to watch the headliners – that’s devastating. I genuinely felt for the downtrodden masses who resisted security’s insistences until they were forcibly herded away.

I likewise sympathized with Gary Clark, Jr. and Heart – they were poised to ride the wave of rock-ousness unleashed by Jett, but instead had to reignite a soaked audience’s mojo in significantly abbreviated timespans (the storm, which never yielded any actual lightning over RFK, lasted a solid 80 minutes). Clark suffered the most: his utterance of “we won’t be stopped” after set opener “Bright Lights” came out muted and timid, and his aside of “Something like that …” after a seemingly shortened “When My Train Pulls In” was no more encouraging, though he did bounce back with searing solos on new tracks “Our Love” and “I’m Gone”, which leant credibility to frequent SRV and Hendrix comparisons. 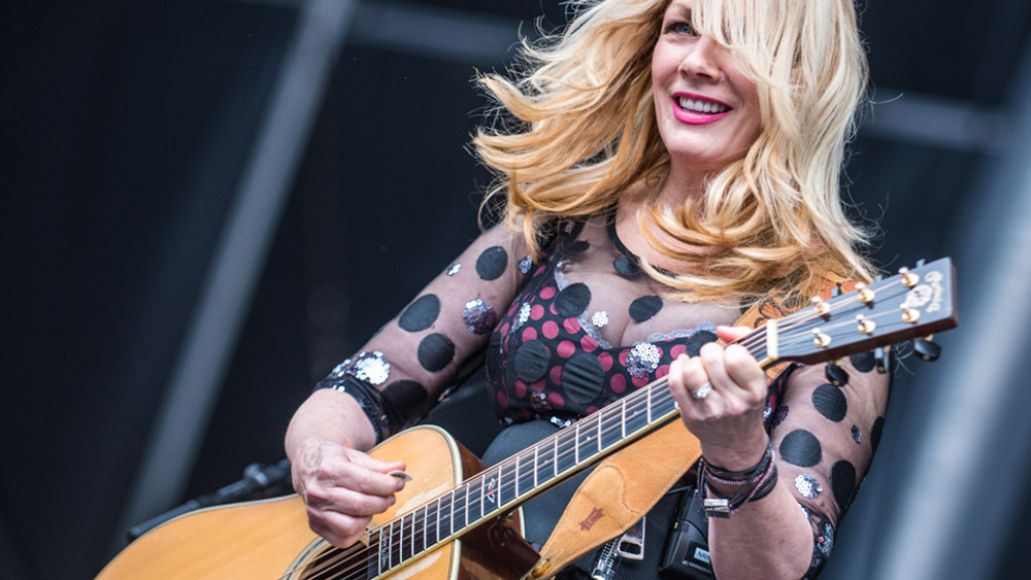 Sisters Ann and Nancy Wilson of Heart had the advantage of decades more experience and an arsenal of chart-toppers. Not a moment was wasted in winning over the crowd: they kicked it off with the still electrifying shred-and-wail of “Crazy on You”, paid tribute to U.S. soldiers and veterans with “Dear Old America”, even snuck in a nod to Nirvana forbears the Sonics with a heavy-metal-toned cover of “The Witch”, and then literally got the stadium’s stands shaking with closer “Barracuda.”

LL Cool J deserves kudos for recognizing that he wasn’t playing to his typical audience – “I know this is your first LL Cool J show,” he remarked coyly – while still managing to pull off the most galvanizing set next to Foo Fighters’ finale. The largely too-young throngs may have been completely oblivious to the historical significance of tunes like “Mama Said Knock You Out”, “Jack the Ripper”, and “Rock the Bells”, but they had no problem bouncing along and waving their arms when LL commanded it. Something similar went down with Trouble Funk: Though they were the only legitimate D.C. natives on the bill, the expansive R&B/funk outfit got more people grooving during their cover of Wild Cherry’s “Play That Funky Music” than on their own ’82 staple “Drop the Bomb”. 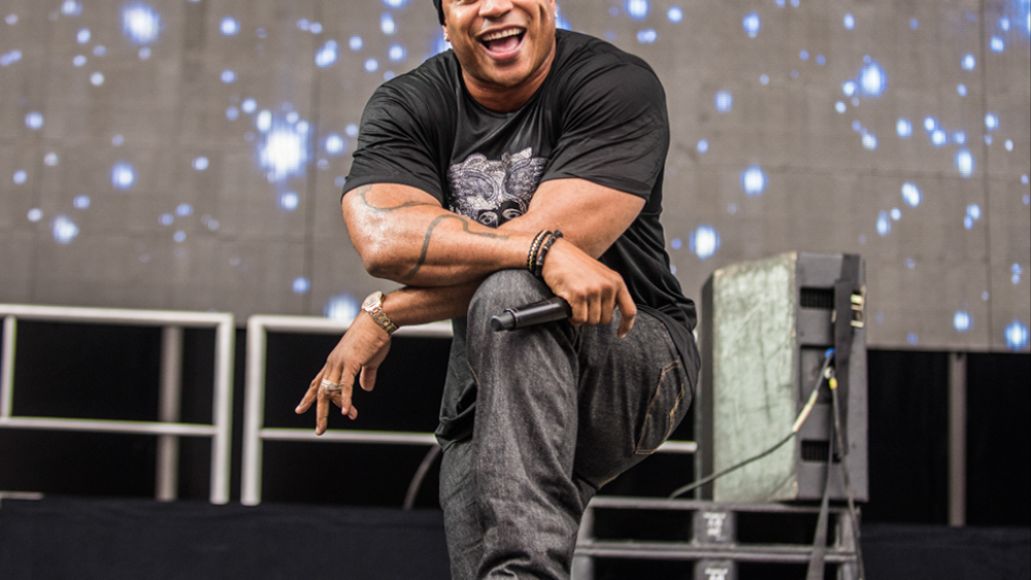 During his set just before that, Buddy Guy also didn’t get all the respect he deserved. I doubt more than a quarter of the crowd could’ve named the legendary Willie Dixon as the original penman behind Guy’s smokin’ cover of “I Just Want to Make Love to You”, and Guy even called out he audience for “fuck[ing] that song up” when they didn’t sing back the refrain loud enough. But at least fans had limitless rippin’ guitar solos to relate to throughout his jam-heavy run. The Chicago bluesman did, however, make a misstep by handing over too much lead time to guest guitarist Quinn Sullivan. Sure, the 16-year-old prodigy – who first jammed on stage with Guy eight years ago – is a dazzler, but why not pick a guest from among the many amazing players present this evening?

That’s precisely the question I’d put to Foo Fighters with a couple modifications: Why on earth, with such a painstakingly curated lineup of friends and past collaborators, wouldn’t you include at least a couple of sit-ins to help this ballyhooed 20th anniversary concert better live up to the hype? It was just last November that ya’ll brought out Trombone Shorty at New Orleans’ Voodoo Experience for a jazzed-out jam on “This is a Call”. And Gary Clark Jr. likewise joined for his excellent solo on “What Did I Do? / God As My Witness” only a couple weeks later at your Austin City Limits TV taping. 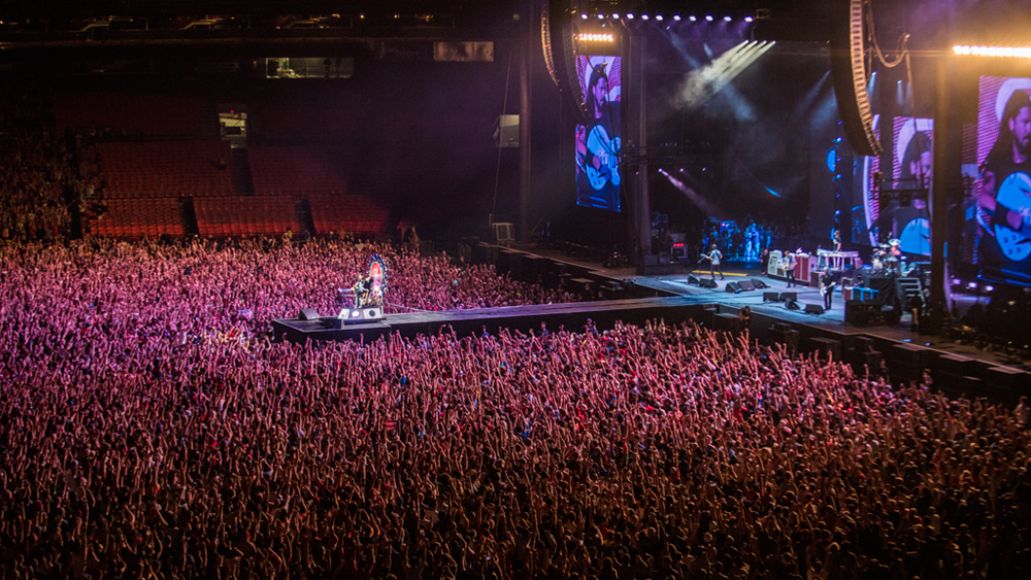 Yes, it was a thrill watching Pat Smear’s disposition grow even more charmingly childlike than usual during the former song, and, sure, it was an old-school fan’s dream to hear first album cuts “Big Me” (slowed down was a nice touch), “For All the Cows” (its dedication to Dave’s mom Virginia in-the-flesh was also super special), and the scarcely ever played “Alone + Easy Target” (I admit I was over the moon during that one) all in one set.

It was, overall, a fantastic rock show. These days, with an expansive catalogue of high-octane modern classic rock under their belts like “Monkey Wrench”, “All My Life”, and “Breakout”, the Foos rarely miss. As illustrated by the mid-set acoustic comedown of “My Hero” and “Times Like These” – sung by Grohl at the catwalk’s edge, sitting in a (normal) chair, comically waving around his crutches with Smear and lead guitarist Chris Shiflett flanking him – they’re masters of dynamic. And Grohl in general remains one of the most entertaining frontmen around. Even though he couldn’t dash about this time like the indomitable devil he is, he still managed plenty of mosh-worthy mane-whips, and his stories about his initial injury and the genesis of the throne  – illustrated by the original video clip, a hand-drawn blueprint, and a few photos – were wonderfully hilarious. 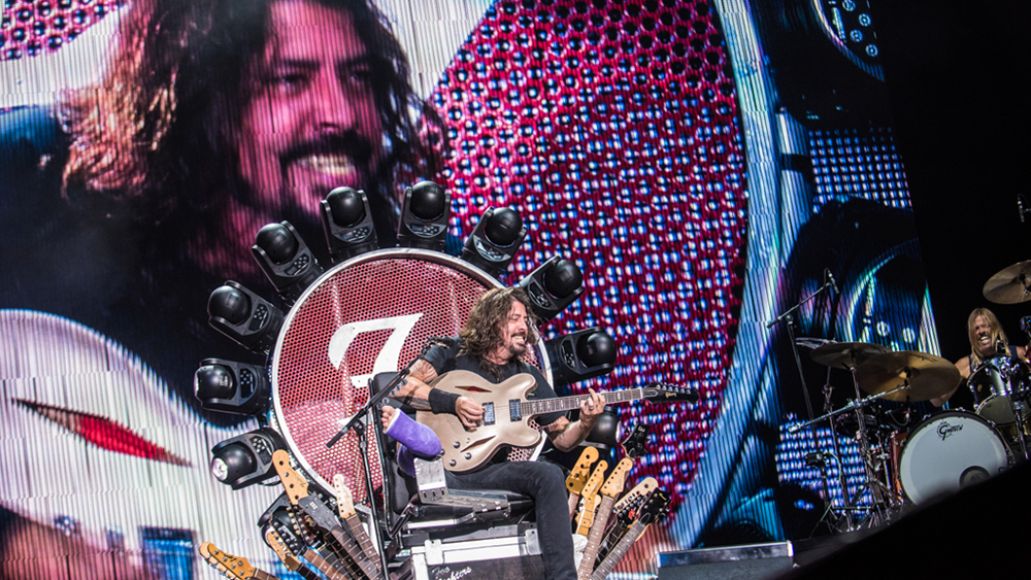 But the glaring omission of collaborations, not to mention the absence of even rarer seminal songs like “Exhausted”, “Wattershed”, or “Floaty” felt like missed opportunities. No one can deny that the customized throne was – in terms Grohl would likely use – fucking badass. But unless it was your first go-round with these seasoned rockers – and, to be fair, that was likely the majority – its novelty wasn’t lasting enough to distract from the fact that most of this supposedly super-special set comprised the usual suspects. I’m not suggesting they neglect fan favorites to play the entire first album – I understand the game. But certainly, to draw in longtime faithfuls to an event like this year after year – a goal that Grohl suggested time and again throughout the concert – pulling out more stops is a must. If this performance was indeed a play in the rock world’s game of thrones, it wasn’t exactly a win.