On July 20th, 2003, The Exploding Hearts crashed their van near Eugene, Oregon while driving home from a show in San Francisco. The accident took the lives of frontman Adam Cox, bassist Matt Fitzgerald, and drummer Jeremy Gage — the only survivors were guitarist Terry Six and manager Rachelle Ramos. It was a tragic end to a promising young band. The narrative typically ends there, with the band’s sole album, Guitar Romantic, being a relic of “what could have been.”

Though The Hearts were done, Six still remained. He hung around Portland for a few years, aside from a brief stay in Oakland in 2007 to be with his now ex-girlfriend. He joined local punks The Nice Boys and released one album. But by 2010, he’d reached his end.

“That’s when I just threw my hands up, and I was done with music in general,” Six says. “I had had enough.”

Six and his wife traveled down the West Coast in search of a new place to make a home. But the journey was also a means of escape from their past lives.

“We just got normal jobs and tried to get as far, far away from the music scene and life as possible,” Six says. “That pretty much wasn’t gonna happen for very much longer. We needed that schedule.”

It wasn’t long, however, before Six found himself getting back into music. He started amassing equipment to build a studio and eventually founded his own label, Tuff Break Records, in 2013.

“Something felt like it was missing. I was like, ‘You know, if I never play a show again, that’s okay. But if I never record another record, that’s a problem,’” he says. “That’s when I was just like, ‘Well, I’m just gonna start recording bands and getting into it that way,’ and that’s kind of what sparked the interest here for everything.”

He found a new perspective in songwriting from behind the boards. It gave him insight into how he writes and builds songs. But it was also a time for reflection.

“Definitely taking some time away was a big help, I think,” Six says. “Just to get my thoughts and my everything organized. It was a pretty big mess when I decided to take a step back, so I kinda cleaned that up a little bit and, you know, got back on track. You know how it goes.” 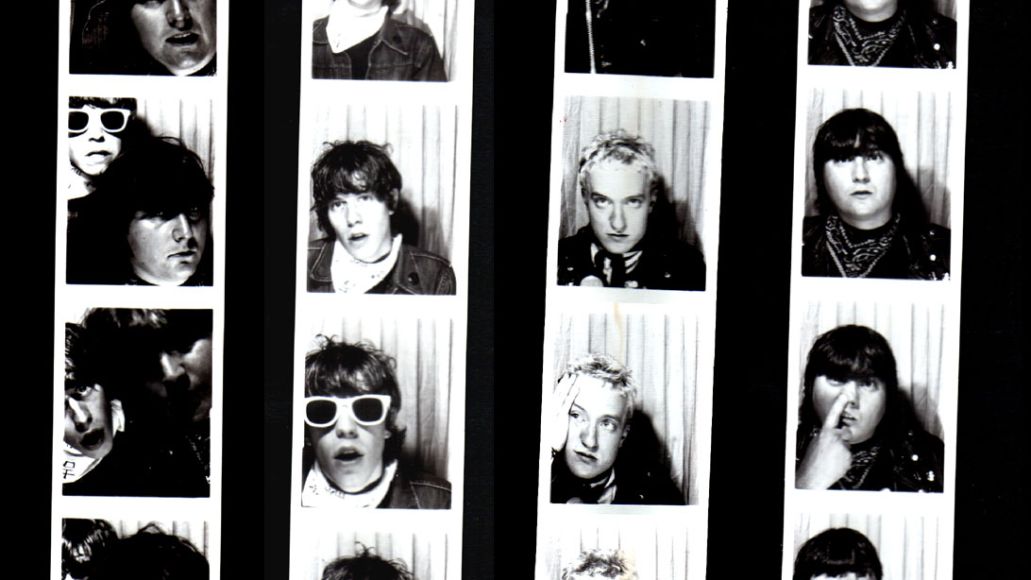 Soon enough, he’d be back into writing music himself. This time, however, he’d do it with a fellow Exploding Heart. The band’s keyboardist, King Louie Bankston, is a hard guy to lock down. After he finished co-writing and recording his parts for Guitar Romantic, he left the Hearts to go focus on music in Louisiana and Memphis.

“[Louie’s] extremely prolific; he just is buzzing,” Six says of his friend and bandmate. “He’s always got something he’s doing. Even if he’s not doing anything, he’s still doing something. He’s gotta keep moving at all times. That’s just how his brain works. He can’t really stop, and that’s what makes him such an awesome songwriter. He’s always coming up with things.”

Bankston left The Hearts on good terms, maintaining a long-distance friendship with Six after the accident, though the two weren’t in heavy communication after Six moved to Oakland.

“I just kind of lost touch with most people,” Six says. “And then … I was playing some songs that I had written years ago and was thinking, ‘You know what? Louie was supposed to help me write this 10 years ago, and I’m gonna call him up, and we’re gonna finish this.’”

Six called up Bankston, reminded him of the song, and told Bankston that he’d be bringing him to Oakland to finish and record it. The song in question was “(I’m) Lookin’ for a Heart”, which would become the A-side of their first 7-inch single under the Terry and Louie moniker. It’s a high-rollicking, throwback punk jaunt complete with paranoia and youthful dissatisfaction — a taste of the same energy that ran through Guitar Romantic.

“That is the last song I wrote musically for The Exploding Hearts. That was supposed to be the title track of the second album that we never got a chance to record,” Six says soberly. “I loved that song. I would play it for years and just kind of warm up, or if I was sitting at the TV, I would randomly play it. And this was 10 years before we even talked about recording it.”

Even with Bankston on board, Six was still worried about getting him to show up. With the studio booked and everything, he checked in on Bankston constantly.

“It took some doing, I think, to get him out here. I didn’t really think he was coming for a bit,” Six recalls. “I was like, ‘You get your ticket yet, you get your ticket yet?’ I think it was like a month before I had all the studio time booked, and I was flipping out a little bit, but he got here. Ever since then, we’ve talked almost every day.”

During those sessions in August of 2013, the duo put down five songs alongside drummer Garret Goddard (Girls, Dominant Legs). They thought about doing a full album, but with only four days together, those songs were all they could muster. Instead of releasing all the tracks as an EP, they decided to go the old-school route and split them between two 45s.

Alongside “(I’m) Looking for a Heart”, Bankston brought along another Exploding Hearts song that never made it to tape called “Daze Gone By”. Six doesn’t appear on the track, which allowed Bankston to record the parts himself.

The Terry and Louie track “Can Ya Tell Me (How Life Goes On)” wasn’t a lost Hearts track, but its inception was oddly reminiscent of their halcyon days. Just like how Bankston sang “I’m a Pretender” to Cox over the phone over a decade ago, he left Six a voicemail at 2 a.m. with his latest composition.

“I was sitting there in the bathroom with an acoustic guitar with Louie’s voice on speakerphone trying to match with the notes and finding the best key,” Six laughs.

After Six had written the song and sent it over to Bankston, he found out that Bankston had actually given the same melody to his other band, Missing Monuments. Oddly enough, the two songs sound remarkably similar, though in different keys.

It’s easy to read into the themes of heartbreak in the songs as well as the bright imagery of their single covers and connect it back to The Exploding Hearts. But Six says none of this was intentional — it’s just who they are.

“Lyrically, it’s just kind of what we do. It’s what we talk about together,” Six says. “The idea of heartbreak and loss, that’s just kind of our deal. We’re always shattered, broken, Tuff Break; everything’s kind of the same formula, you know?”

Though he’d warmed up to the idea of writing and recording again, Six never broached the idea of performing the songs live. But in the end, he didn’t really have a choice. Bankston called him right before they were about to drop the singles and said Terry and Louie were booked for Gonerfest.

“I didn’t even think we were gonna play. I just thought we were gonna be kind of a singles only, eclectic record only band,” Six says. Even though they only had five songs in their repertoire, Bankston wasn’t concerned. He excitedly gave Six a list of Hearts tracks that they’d play, including “Modern Kicks” and “Sleeping Aides and Razorblades”.

“I was a little nervous playing those songs again, that Hearts stuff,” Six says. “But really, it’s just me and Louie playing songs that we wrote together years ago without the stigma of the tragedy. They were just songs that we used to play.” 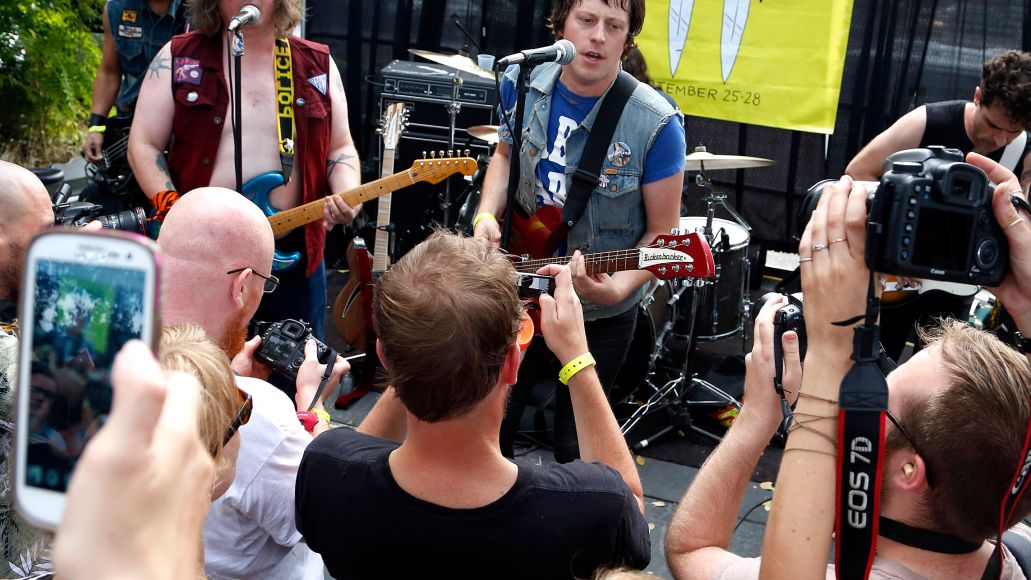 With the success of GonerFest behind them, Terry and Louie are embarking on their next punk quest: Portland’s Project Pabst. The only time the duo’s performed Exploding Hearts material in the band’s hometown was during an impromptu acoustic set at 2008’s King Louie Stomp, a festival dedicated to Bankston and his numerous bands. According to Six, this Sunday at Project Pabst will be the first time Portland has heard these songs electric and with a full band since 2003.

The booking at the festival is far from a standard reunion or nostalgia act to bolster a bill. Matt Sessler, the National Brand Ambassador for Pabst, was a fan of The Exploding Hearts during their short run in Portland. Six recalls Sessler being one of their biggest fans, often dropping off cases of beers at their shows and knowing all the words to their songs.

“I just remember somebody saying, ‘You should check them out. They spray-paint their amps pink,’” Sessler remembers. “Who the hell thought white jeans were cool in 2001?” This stray from the folk aesthetic that was building in Portland during the early aughts appealed to him.

Sessler and Six kept in touch over the years; Sessler described their relationship as “Instagram friends.” But as he was putting together the lineup for the second annual Project Pabst, Sessler decided to reach out to the former Hearts players.

“I just sent a message that was like, ‘Hey, absolutely no pressure at all, but it seems like you’re kind of playing music again, and I imagine at some point you might want to play live in front of people. If you do, we’d love to have ya,’” Sessler says. Six agreed, saying he’d do whatever Sessler wanted. The set is one of Sessler’s most anticipated for the weekend.

“I think it’s gonna be a party,” Sessler says. “I think there’s a bunch of locals here who really, really want to come out and celebrate that.”

Serendipitously, Terry and Louie’s set will be a day before the anniversary of that car wreck. What might typically be a day for mourning can now be a celebration of the band’s fervent work. For many, this will be the first time ever seeing Six and Bankston performing these songs. Being protective of the band’s legacy, Six says he’s meticulous about the way the songs sound and the specific way that they’re played.

“It’s something I safeguard, and I’m very protective of that,” Six says. “But a lot of that is just something I need to work through and just kind of get over and share with people.”

Six and Bankston are continuing to move forward: They’ve already written half of their forthcoming debut album. The record will be split into a “Terry side” and a “Louie side,” recorded between Oakland and New Orleans. Six is also preparing to release a box set of Exploding Hearts singles with previously unreleased artwork created by Cox.

The day before our conversation, Six says he was at a bar in Oakland when a stranger approached him. It was a fan from Australia with whom he had communicated a bit, sending him Terry and Louie singles. The man told Six that he flew all the way to the States for Project Pabst and the chance to see him and Bankston play.

Looking for a Heart: Terry and Louie's Return to Portland