How do you know if a music festival is successful?

Is it all about making money? The fan experience? Being able to book top-tier artists? There seem to be countless metrics for which to grade a music festival, and none can really capture the sum total of the event. You can’t be everywhere at once. In the end, you are just one person with certain standards of what is “worth it” and was is not.

In its second year, Pemberton Music Festival saw between 25,000 and 30,000 fans enter the grounds each day in one of the most scenic locations on Earth to see one of the year’s most eclectic and inspired music lineups. In many, many ways, Pemberton is a rousing success. 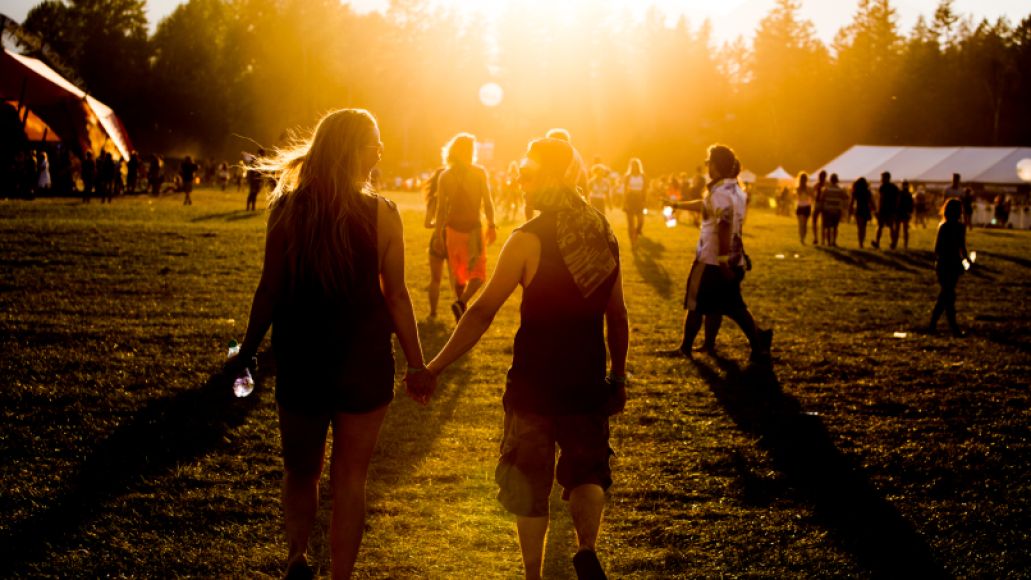 But maybe the most important take away is in a very specific demographic: the 16-23-year-olds who populated the festival’s Bass Camp, which featured top-flight DJs and hip-hop artists, and made their way to the festival’s main grounds for acts like Edward Sharpe and the Magnetic Zeroes, Kendrick Lamar, Kid Cudi, and Weezer. For young people, the festival felt like a pinpoint in the arc of their life, with four days of camping and partying playing as much a role in their entertainment as the actual music. Getting off a flight in Los Angeles the next evening at the festival, three teens could be overheard saying they wished they were back in Bass Camp. Even the four days for them weren’t enough.

On top of that, there was a water slide, well-curated late-night sets that let the party extend until two am, a comedy tent, free water refill stations, and many of the other amenities that meant a good time for the fan that was truly able to immerse themselves, that didn’t mind either not showering or waiting more than an hour to clean off, and whose answer to last night’s hangover was to just go harder on the next day. In short, if you came to party, Pemberton provided the setting for a great one.

Of course, pleasing this group means a less desirable experience for others. Despite inspired sets from Broken Social Scene, Father John Misty, and Beirut, Pemberton Music Festival was not kind toward indie rock, where the acknowledgement that most of the attendees had little to no interest in them alleviated any tension that they were playing to small audiences. Despite the eclectic billing at more and more festivals, the reality is that fans of a BSS are getting too old for a music camping festival, and would rather see a band like The Decemberists on their own tour. Yes, there are many young people that don’t relate to EDM and hip-hop culture, but it seems like the word is now out on many music festivals, with certain music fans well aware that the environment just isn’t a fun place to see The War on Drugs. 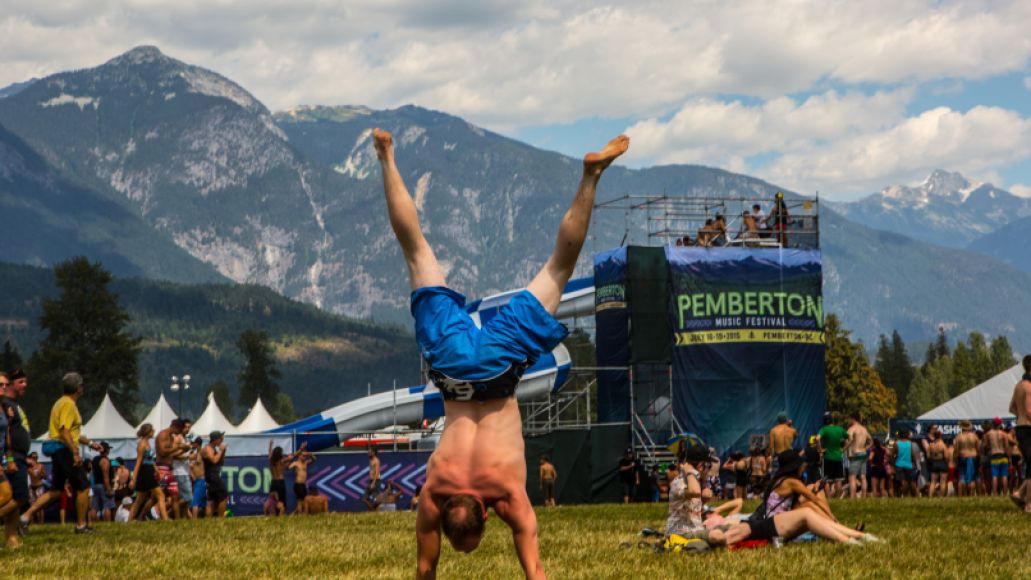 The only way the consumer really knows if a music festival is doing well is whether it appears the next year, and the hope is that Pemberton keeps doing what they do, because the setting is gorgeous, the majority of the fans seem pleased, and the organizers appear to have a real passion for putting it on. Of course, there could be improvements. For one, the food selection was a notch below what Coachella and Outside Lands and many others are bringing to the table. Another would be inserting more shady areas on the grounds, as unexpectedly hot weather kept many of the day time sets from great vibes as fans were unwilling to deal with the heat.

But these are minor points that can’t take away the conversations heard about the best weekend of many young people’s lives. Is it Canada’s answer to Bonnaroo or Coachella or huge European camping fests? Not yet. But the raw material is there for it to grow into one of these landmark events. Nevertheless, here’s a complete rundown of the most notable performances we caught. 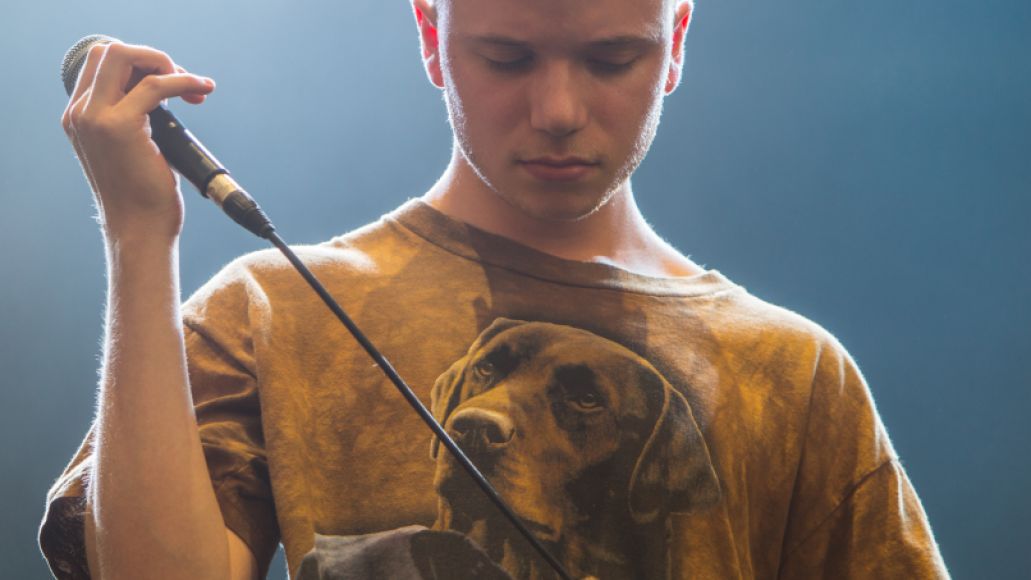 “This is our first show together,” said Spooky Black, aka Corbin, and everything but the music would exemplify this fact. The singer rarely looked up from his shoes, or even opened his eyes, and when he spoke, it was more sheepish than his withdrawn stage demeanor would even indicate. But the voice of Corbin, usually falling somewhere between James Blake and Antony Hegarty, enthralled, until “Worn” left that behind and found the young man yelling and rapping effectively. Just when you thought the tone of the set had come into focus, a pretty terrible Bob Marley cover (“Is This Love”) appeared, seemingly just to fill time. In the end, the lasting feeling of Spooky Black was intrigue, with Corbin maintaining his weirdness, humor, and clear talent while delivering disinterested irreverence that maybe only millennials can truly appreciate. If the goal was to maintain a mystery, it had been achieved. 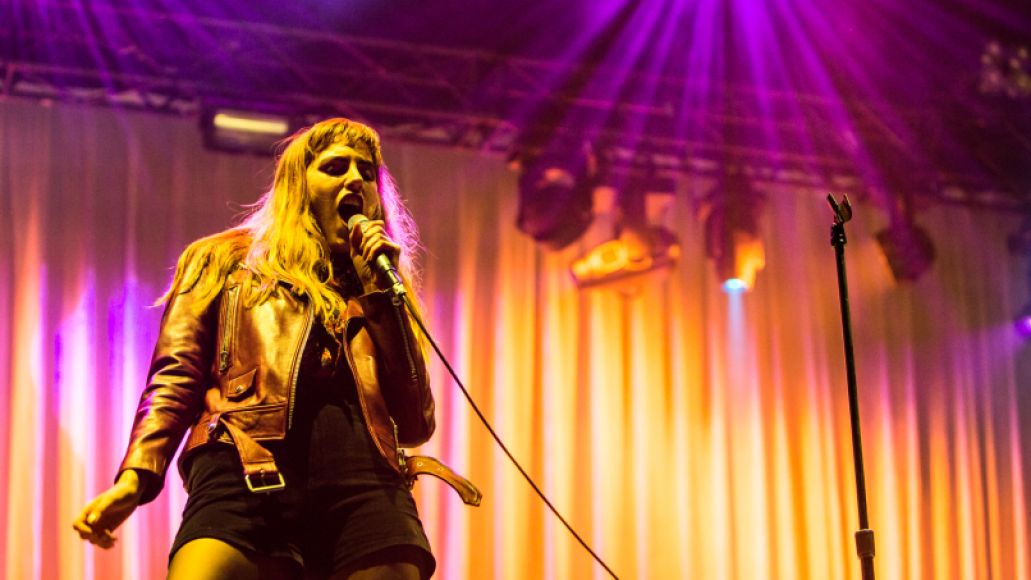 “I don’t know if you know my music or just stumbled by because it’s a festival,” Ryn Weaver said early in her set on Thursday night. Aside from her parents doting proudly in the photo pit, most people fell in the latter camp. But the thing Weaver has going for her is that her pop music is instant in its effect, her loose delivery sometimes adopting a Lana Del Rey drawl. But musically, Weaver is closer to Ellie Goulding at first impression, and her performance chops indicate a similar level of professionalism. Either way, for those willing to stay out late on the festival’s first night, they were rewarded by a performer aiming to impress, and doing just that. 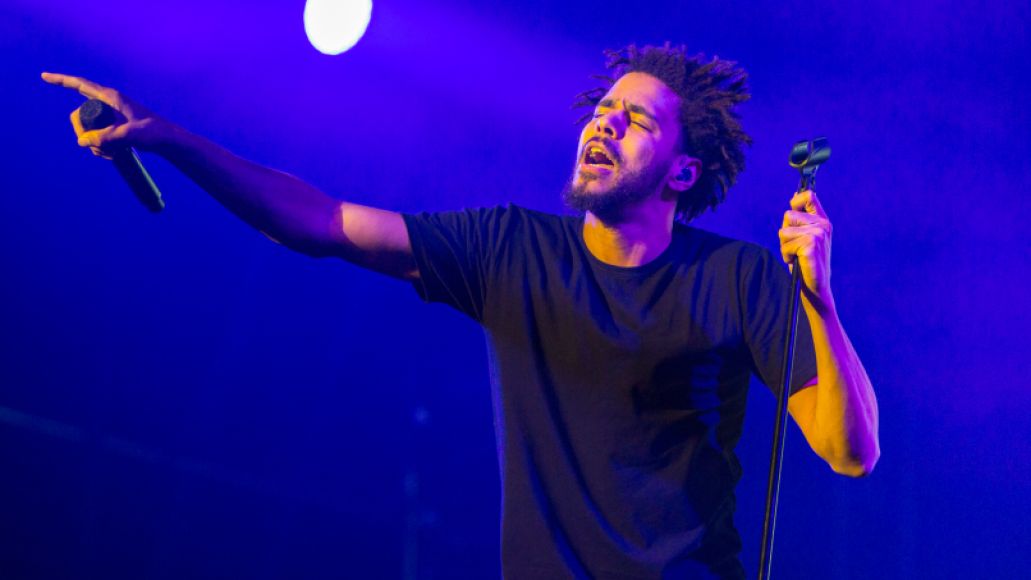 J. Cole doesn’t get a chance to top too many bills festival, but a Thursday night Pemberton stage appearance up against Bassnectar allowed Cole to show why he is next in line after Kendrick Lamar and Drake. It shouldn’t be a surprise that Cole can draw: He’s currently in the midst of an arena tour and his latest album, Forest Hills Drive, sold 350,000 copies in its first week, a fact Cole is plenty proud of. “They say this was the quickest album to sell a million copies without a feature,” Cole boasted before announcing that he was going to play a lot of it. And this is where he proved himself savvy. On his recent tour, Cole has been playing the whole album, but tailoring the performance for a fest, while remaining committed to his most recent material, paved the way for the rapper to seem like he’s been headlining music festivals for years. 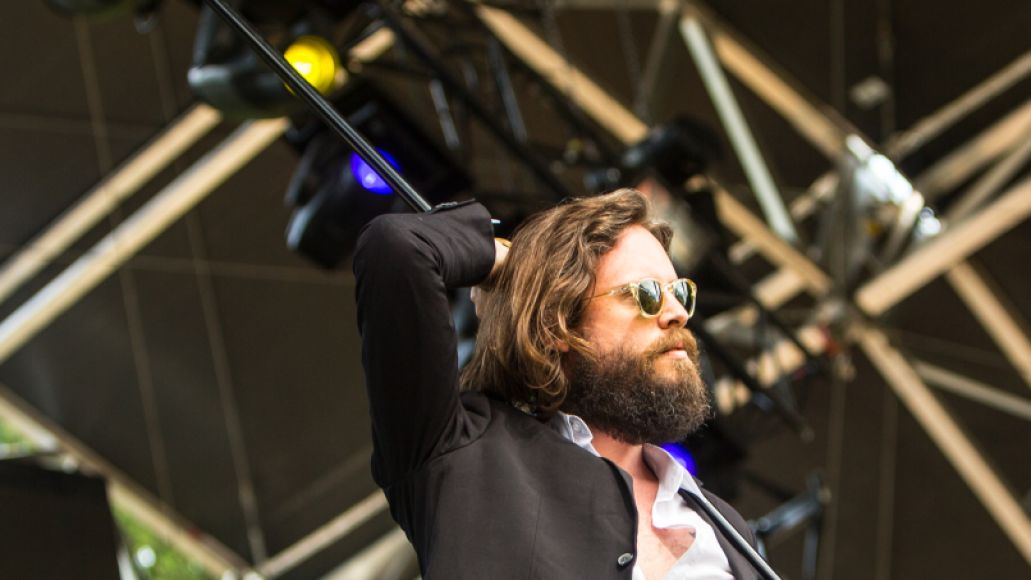 It didn’t matter to Father John Misty that he played at 2:30 in the afternoon or that half his audience was seated. Or, maybe it mattered but he didn’t show it. Instead, he was the joke crackin’, suit wearin’, microphone spinnin’, layin’-down-on-the-stage, bearded tour-de-force that he’s been all year at festivals. And when he went deeper into his back catalog for “Only Son of the Ladiesman”, he was rewarded by a surprisingly large contingent singing his words along with him. There is something contagious about watching Father John Misty, where you leave feeling a little snarkier, a little more suspicious of everything, and (sometimes) hating everyone and everything around you. And maybe he summed it all best when he announced that, “This is a huge hit of mine back in my home country, the Internet,” before “Bored in the USA”, a song that boils with contempt towards contemporary living. He finished the song holding up a smiling poop emoji totem. It was perfect.

Matt and Kim and Bleachers (tie) 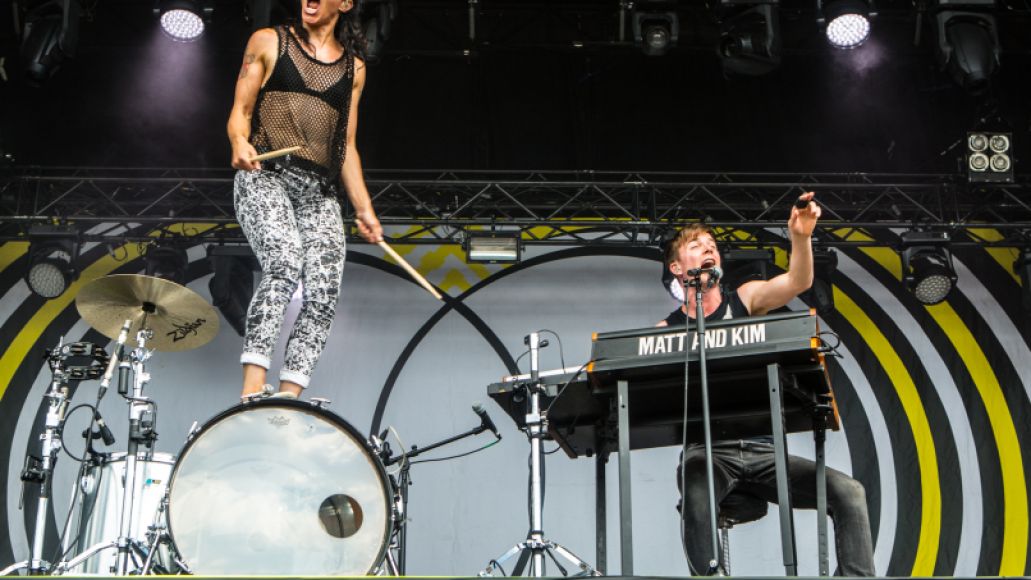 Going from Father John Misty’s hyper-self-aware, sarcastic satire to Matt and Kim’s unselfconscious, earnest joy parade was a terribly strange juxtaposition that no one should try. Because seeing Father John Misty means adopting his worldview for a few moments, every bit of that worldview hated Matt and Kim. 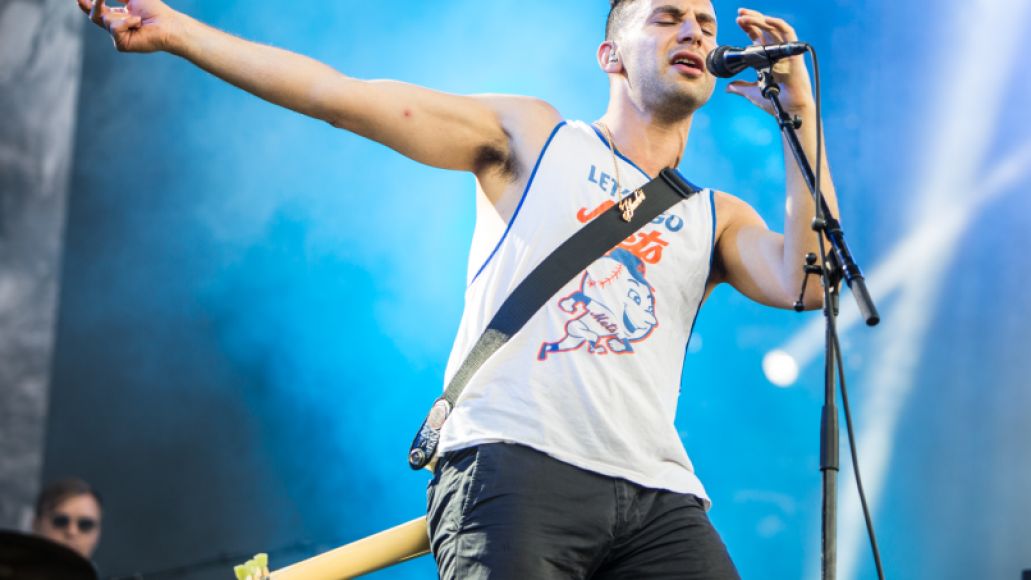 For Bleachers, it was the same thing as Matt and Kim, except the .fun member covered Fleetwood Mac’s “Go Your Own Way”. Somewhere, Father John Misty spit. 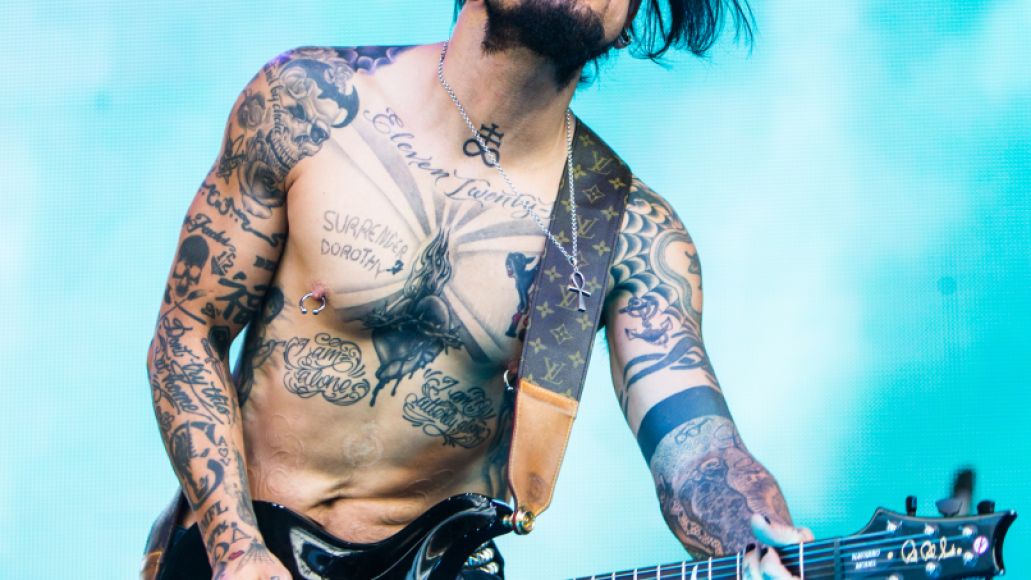 It’s weird that Dave Navarro and Perry Farrell have managed to form a successful partnership for as long as they have. Whereas the stoic Navarro plays it straight on stage, letting the back tattoo, nipple piercings, and formidable guitar work speak for itself, Farrell seemed like he was on another planet on Saturday afternoon. “Hello Vancouver,” he exclaimed, and after receiving brushback due to the city’s location being two-and-a-half hours away, Farrell started calling the crowd “Whistler”, before going off on a tangent about his stepmom not letting him whistle when he was a little boy and how he now whistles all he wants. It’s hard to be down on the guy that is majorly responsible for music festivals being a thing in 2015, but with vocals that failed to come close to his band’s recorded work to banter that was often uncomfortable, the best thing that could be said about Jane’s Addiction on this day was that the other three member performed with competence.

Best Reason to Have an On-Stage Panic 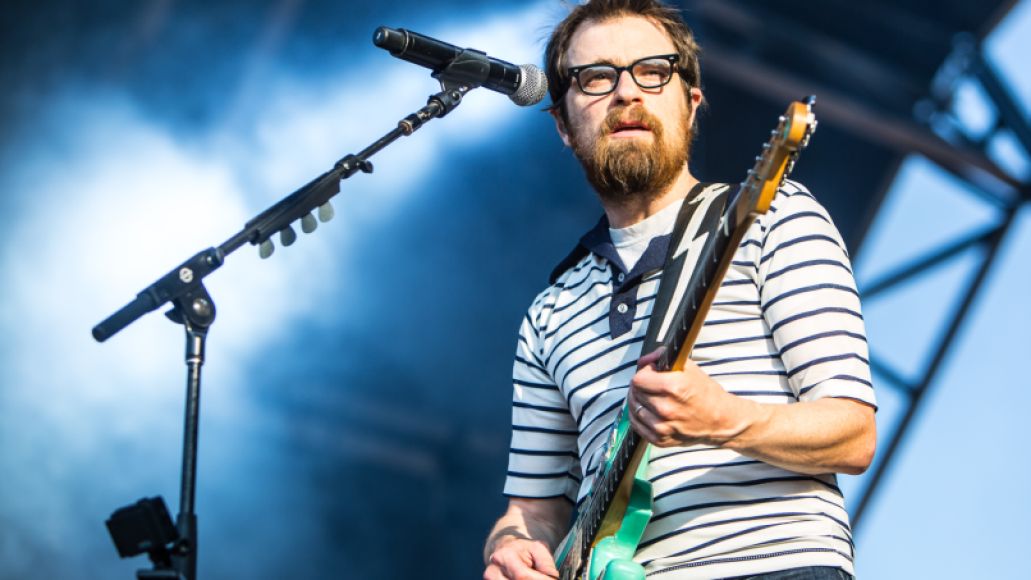 For the opening series of Weezer songs, Rivers Cuomo seemed even less at ease than usual, nearly forgetting to finish the last line of “My Name Is Jonas”. A crew member brought Cuomo a towel but that still didn’t appease the singer-songwriter, who continued to stiffly wade through “Hash Pipe” and “El Scorcho”. After the latter, the reason for the near-panic was clear: Cuomo wanted sun screen. It was a funny reason to nearly fumble the opening of the show, but once the Weezer frontman had received his skin protection, the band delved into a satisfying hit parade that had the young crowd chatting into the next day as they returned to the Bass Camp and the campgrounds. 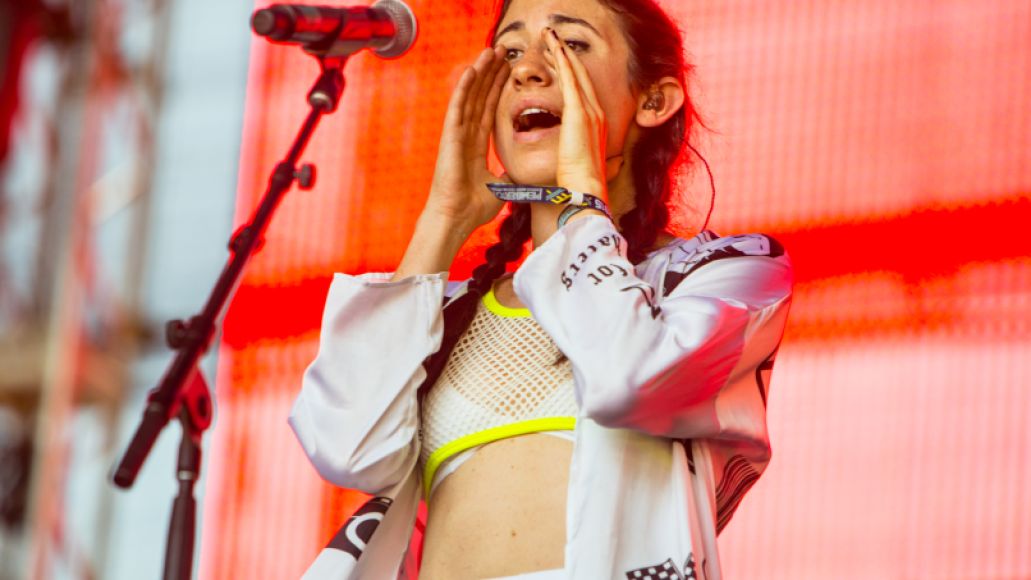 At 3:15 in the Bass Camp dance tent on Sunday, numerous portable hammocks were seen on the sparsely populated wood chip landscape. “You can come closer if you like,” Hundred Waters‘ Nicole Miglis said to start their set, but really, this was music to wash away a weekend, to find peace in the dust and clarity in the unrelenting heat. There was something brave in the set, with Hundred Waters doing what they do very well rather than trying to play to what they think a fest should be.