There was a post-apocalyptic feeling around this year’s Project Pabst. Though Portland, Oregon is typically seen as a metropolitan utopia of Portlandia quirkiness, the festival felt far removed from this visage. Instead, it felt more like a Mad Max battle royale.

The festival took place in a gravel lot under the all seeing eye of the Ross island Bridge. After walking through an entrance that looks like the top of a PBR can, attendees were greeted by a giant statue of a unicorn. Pair all of that with an unexpected heatwave, temperatures settling around the high 90s, and it wouldn’t be too farfetched to imagine George Miller repurposing the area for one of his desert romps. If only the festival promoters gave Thee Oh Sees guitar-flamethrowers. 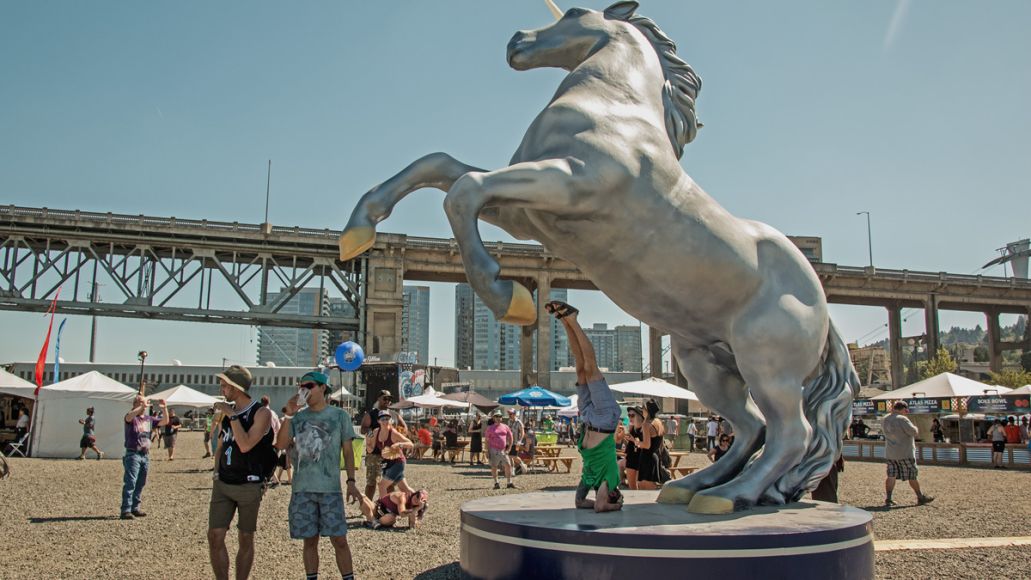 Thankfully, the festival made accommodations accordingly. The water refill stations ran efficiently, there was an arcade tent to cool off in, and even a vinyl recording booth. But it was hard to find time to indulge in any of this with the small but stacked lineup. There’s never a moment throughout the day where music isn’t happening. Bands alternated between two stages, so one could set up while the other played. Drudging between the two in the heat became an act of endurance. Despite beer being thrust out everywhere attendees turned, it was hard to sip any without fearing the dire consequences.

Besides the sweat and pleas for cloud cover, the bands seemed unaffected. Each act performed vigorously to counterbalance the effects the sun was having on the ever-drowsy attendees. Classic acts like Blondie and Weezer became the rewards for making it through an entire day of roasting. Along the way, punks and rappers did their part in keeping spirits up and good times had. Everyone made it out, denying the apocalypse another day.