If you name your album Positive Songs for Negative People, you damn well better have an assertive live show. You’re telling me right there in the title that you’re going to cheer me up, brighten my day, and make me see the blue sky behind the clouds. When I’m face to face with you in a concert hall, that’s your chance to really deliver. And Frank Turner delivers like Amazon Prime.

I’ve seen Turner and the Sleeping Souls, but always at an outdoor festival in a crowd filled with casual fans and passersby. Each one of those shows has been high impact and applaudable in the sincerest way; they just didn’t quite reach the explosive heights of watching him own a sold-out crowd in a barely 1,000-capacity venue. And this was just the first of three such nights, and a Monday at that. As I marveled at the steamrolling pace of the performance and the ceaseless stamina of both performers and audience, I had to shake my head in awe imagining what the mid-week crowd would bring.

There was no pause, no downbeat, no breather in any moment of the show. A 22-song setlist blew by like the hot breeze that precedes a train as it rushes towards the station, refreshing and yet still steamy — in all the right ways, in this case. Turner’s banter was rapid-fire and friendly, even when shooting down fan requests (“I already have a setlist, there’s no point in yelling!”). The vast majority of the floor had hands high, clapping or first-pumping, and bodies moving the entire time, including what could be the first ever mosh pits and crowdsurfers ever seen at a “folk” show (even Lorna Thomas of openers Skinny Lister surfed her way from the back of the crowd during “Glory Hallelujah”). There were no moments when Turner sang by himself; the entire space was filled as much with the voices of fans as the singer in front of them. This was true too for the solo portion of the set, from “The Opening Act of Spring” through “I Am Disappeared”, at which point he was rejoined halfway through the song by the Sleeping Souls without missing a beat. 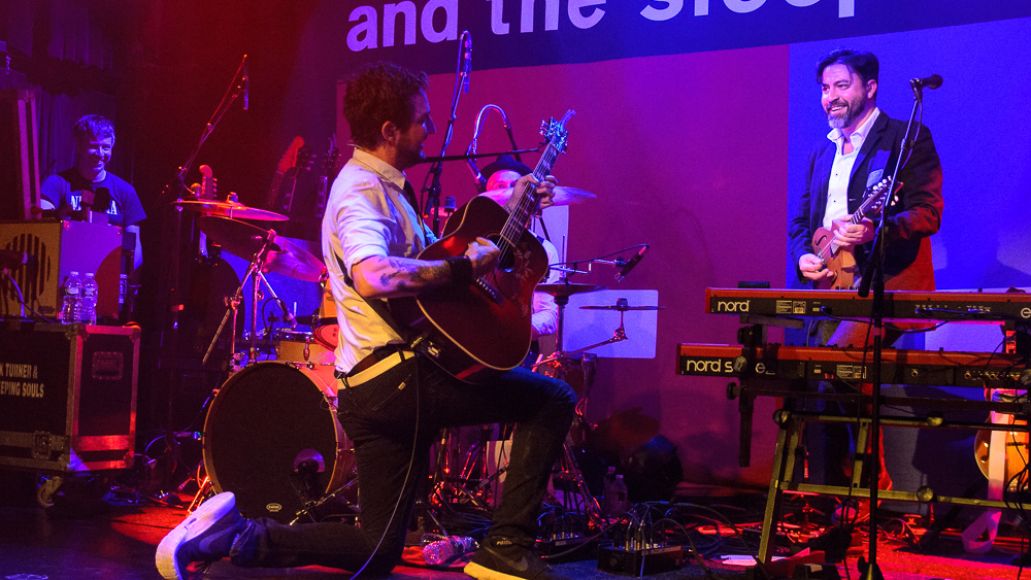 I said “folk” a few sentences ago, but fans know that’s not really what Turner is. There’s the communal energy of folk, the raucous nature of punk, and the uplifting spirit of pop songwriting. All together, there’s more of a pop-punk thing going on here, not just in the music, but in the response to it. I never feel more like I’m stepping into a small family than when I’m at some sort of pop-punk gig, and that’s the same sense I got at Irving Plaza.

At first, I wasn’t ready for it; when entering the photo pit, I got the always lamentable moment where someone who’d been waiting all show up on the rails is distressed that I’ll be blocking their view. (It doesn’t matter that photographers are in there for only the first three songs 99.9% of the time — somehow people still fear we’re going to ruin their show.) A girl in a Frank Turner shirt asked me to move (her friend asked if I was Frank Turner’s brother. Apparently without my glasses, there’s a resemblance I don’t see). I thought I was going to be glared at for the next 15 minutes. Instead, this same girl grabbed me by the shoulders during “If Ever I Stray”, pulled me into her group, threw her arms around my neck, and sang out at the top of her dear, sweet lungs. Any animosity she had towards this 6’3″ guy standing in front of her immediately went away when Turner took the stage. He’s just got that sort of positivity.

To be fair, it wasn’t all togetherness and stranger hugs. During “Recovery”, a fight broke out around the folks who had been moshing in the center of the crowd. Turner cut the song short and immediately called out the brawlers. He didn’t ask or beg them to cut it out — he commanded it. “I don’t give a shit who started it,” he said. “Fighting is fucking stupid.” He spoke fast, and my ear isn’t trained for his accent, so what follows is just the best approximation of what I heard him say:

“Look, the world out there is fucking harsh. So we close those doors so we can be here together in this place and live by the rules that we set for each other. And those rules include no fucking fighting. We’re here to have a good time, okay? Take care of each other out there!”

The fighters dispersed, one was tossed out, and the band went right into “The Road” with the crowd cheering them on. 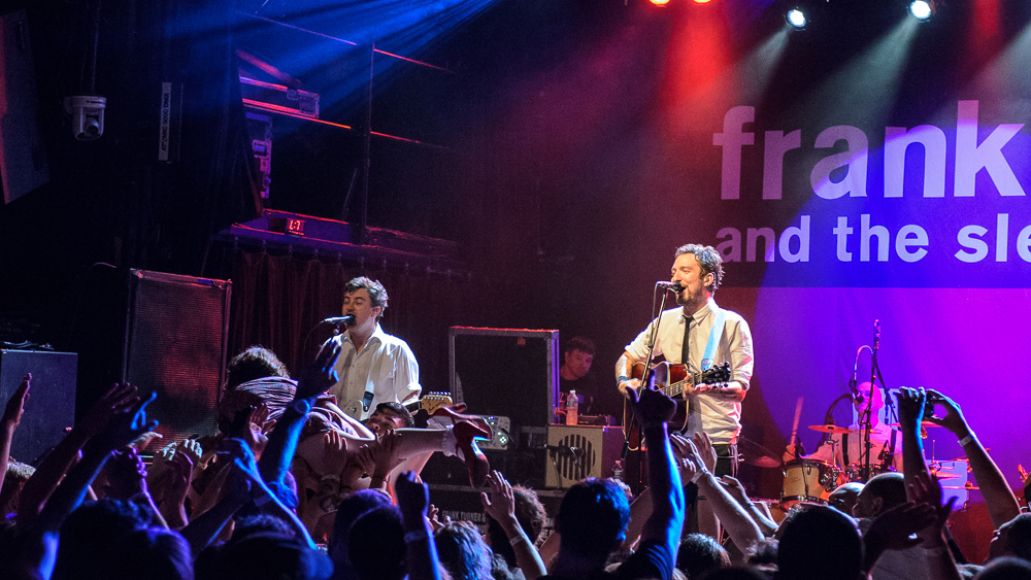 Yes, there are a lot of corn kernels in what Frank Turner is all about. Lyrics sung last night included, “So come on now if we all pull together/ We can lift up the weight of the world from your shoulders” (“Glorious You”); “It doesn’t matter where you come from/ It matters where you go” (“Peggy Sang the Blues”); and “Get up and get down and get outside” (“Reasons Not to Be an Idiot”). Despite the face value of words like that, to judge it without really experiencing it would be to make an unsophisticated assumption. Each one of those songs was an absolute highlight. Turner connects with his fans in a big, personal, affecting way, the kind where they create a flag somewhere in Europe and manage to have it follow him all the way through America and (hopefully) into Mexico. And Turner doesn’t even have to do anything, just ask if it’s there. Last night, it was right in the front row.

During “Photosynthesis”, with its refrain of “And I won’t sit down/ And I won’t shut up/ And most of all, I will not grow up,” Turner managed to get the entire audience to crouch down as close to sitting as possible. He instructed them that once the chorus picked up, they were all to “jump up and dance like this is the last gig you’re ever going to go to in your fucking life.” And as they all yelled out those gosh darn cheesy lyrics, they all popped right up and rocked out. If it really were their last gig ever, it’d be a damn fine way to go out.

Setlist:
Get Better
If Ever I Stray
Losing Days
Out of Breath
Glorious You
Peggy Sang the Blues
Back in Black (AC/DC cover)
Josephine
Polaroid Picture
Long Live the Queen
The Opening Act of Spring
The Ballad of Me and My Friends
Imperfect Tense
I Am Disappeared
Photosynthesis
Plain Sailing Weather
Glory Hallelujah
Reasons Not to Be an Idiot
Mittens
Recovery
The Road
The Next Storm
I Still Believe
Encore:
The Angel Islington
The Way I Tend to Be
Try This at Home
Four Simple Words