If things had gone as planned, “They call it a Royale with cheese” would sound entirely different in our heads than it does today. Recently leaked casting sheets reveal that Quentin Tarantino had originally envisioned very different casting choices for many of the roles in his cult classic Pulp Fiction.

While the auteur nabbed a few of his top choices, including Tim Roth as Pumpkin and Amanda Plummer as Honey Bunny, some of the other major characters were intended for other people. Playing Vincent may have revitalized John Travolta’s career, but the part was actually written for Tarantino’s Reservoir Dogs star Michael Madsen. Travolta is noted as a “strong, strong, strong second choice,” but if he couldn’t do it, offers would have gone out to Alec Baldwin, Gary Oldman, Michael Keaton, and maybe even Denzel Washington. Dennis Quaid’s name is also on the list, though on the low end of things.

(Read: What we learned from Quentin Tarantino’s epic interview with New York Magazine)

As for Eric Stolz’s scene-stealing performance as drug dealer Lance, Tarantino penned that character with John Cusack in mind. True, Stolz was listed on the same tier as Cusack, but the notes clearly state that Cusack was the top choice. Keaton and Oldman were also considered here, as were Johnny Depp, Christian Slater, Bill Paxton, Nicolas Cage, and even Samuel L. Jackson.

But if Jackson were to play Lance, who would’ve been the jerry curled Jules? A longer casting list notes Laurence Fishburne (misspelled on the list) and Eddie Murphy were in contention. Bruce Willis, it turns out, wasn’t even on the first ballot for Butch, as Matt Dillon, Sean Penn, Cage and Depp were all in the running. Rosanna Arquette may have eventually played Jody, but Tarantino originally preferred her sister Patricia — or Bridget Fonda, Pam Greier, Cathy Griffin, Sofia Coppola, or Jennifer Jason Leigh.

Perhaps most surprising of all is that Tarantino’s eventual muse Uma Thurman wasn’t on the initial list for Mia, either. Instead, Fonda, Patricia Arquette, Virginia Madsen, Marisa Tomei, Angela Bassett, and Phoebe Cates were all considered for the part.

Some would argue that Pulp Fiction is perfectly cast as is, but these early possibilities give an interesting look at what was almost an alternate reality. Check out the complete lists below. 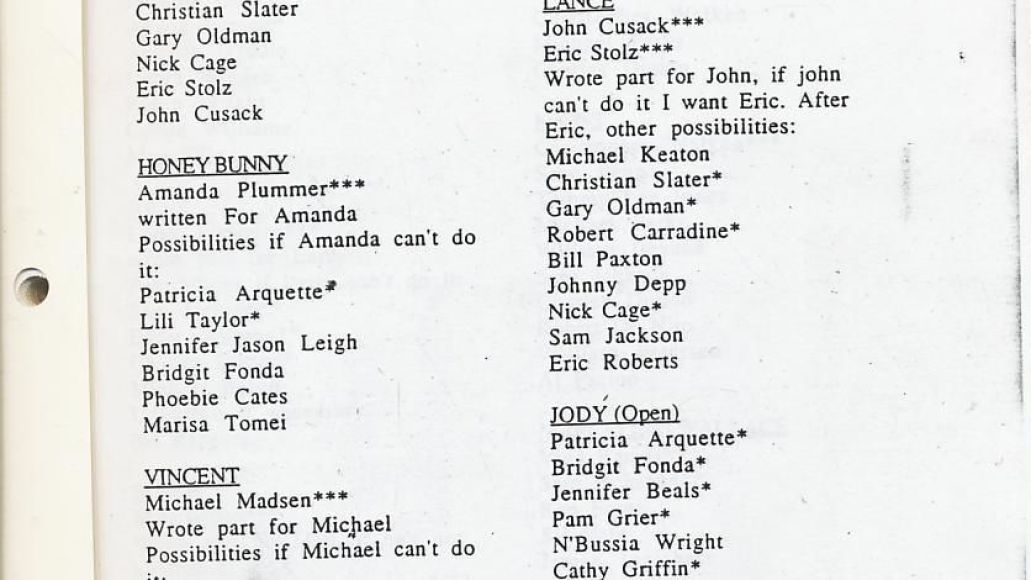 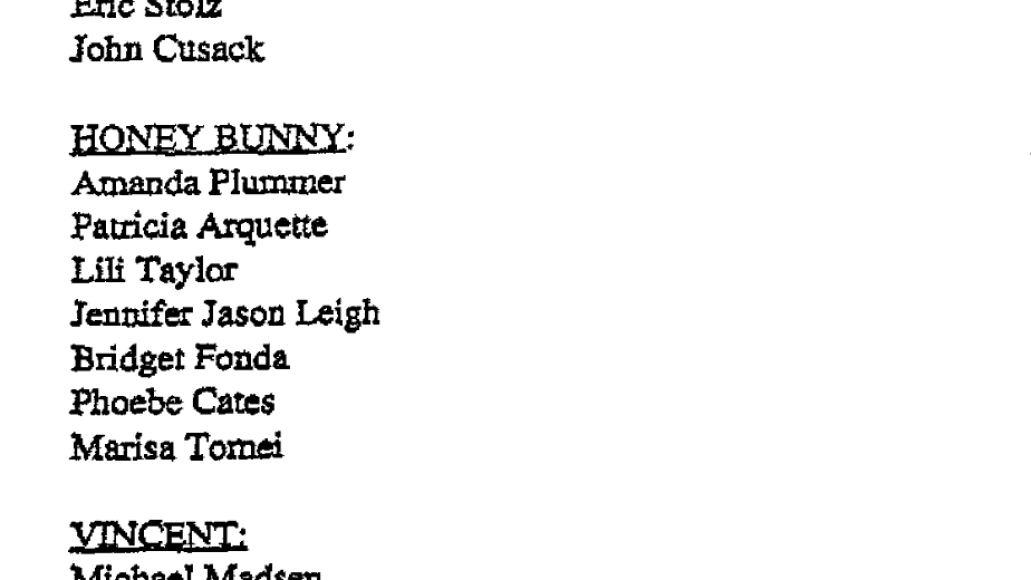 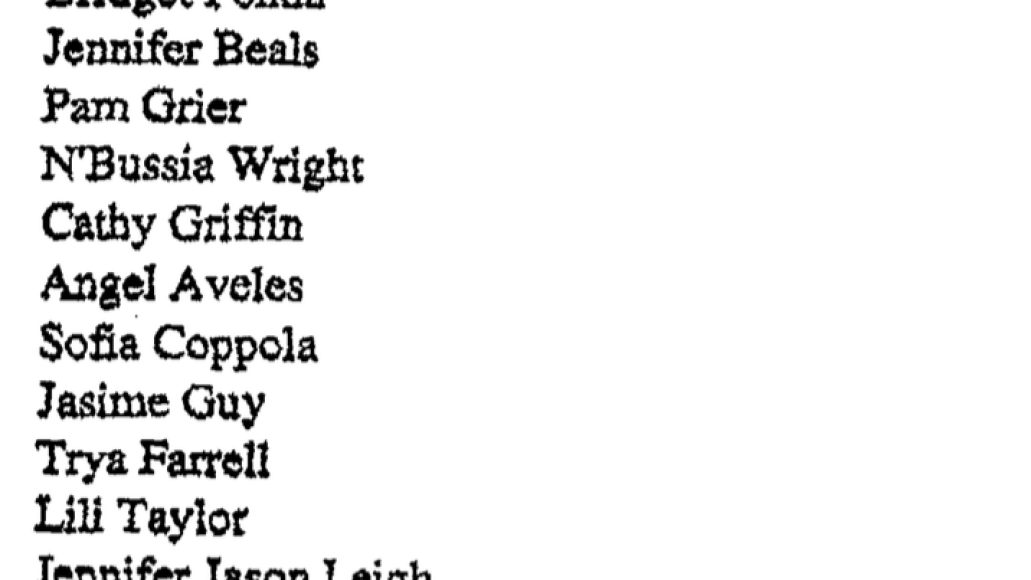 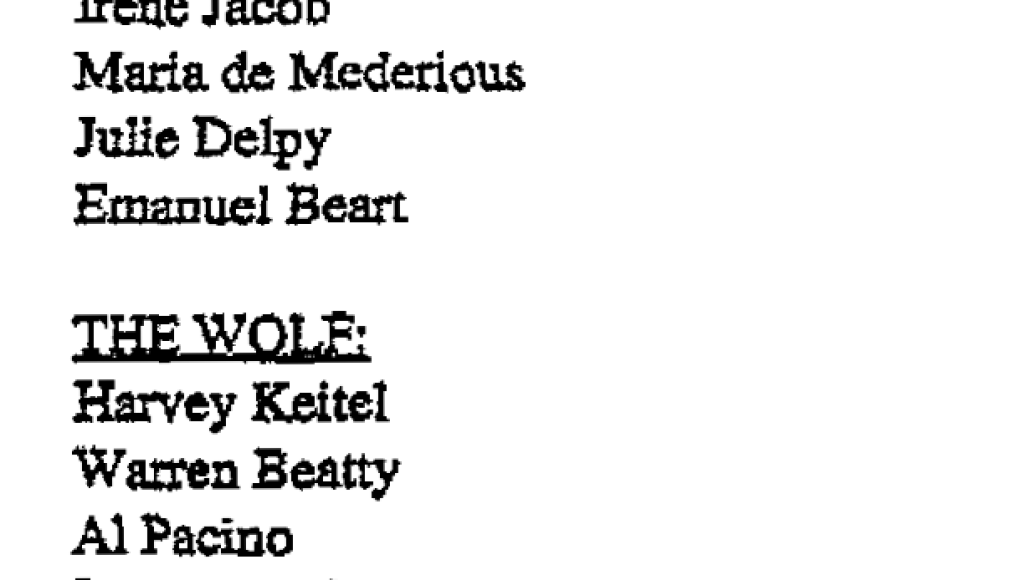 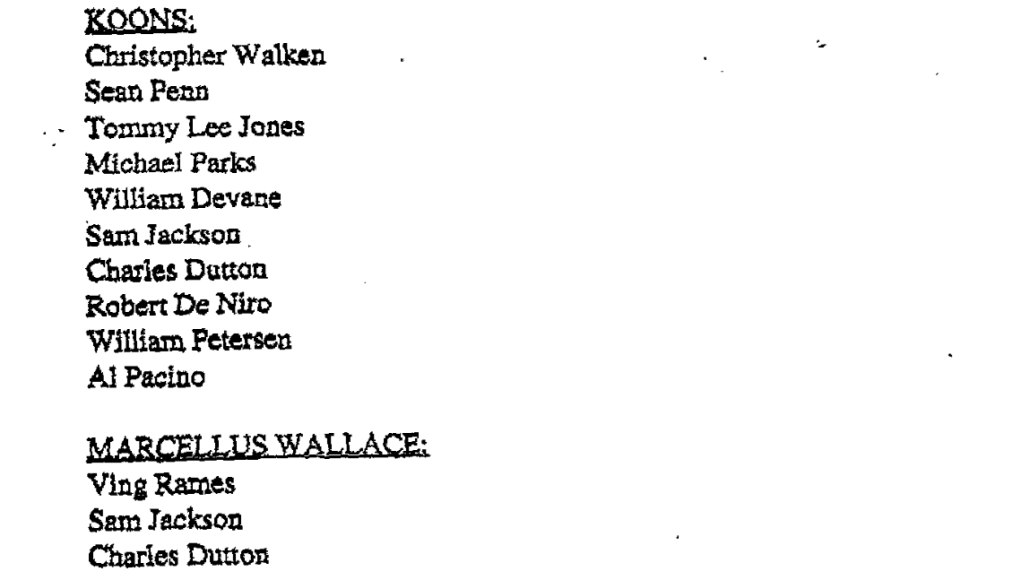 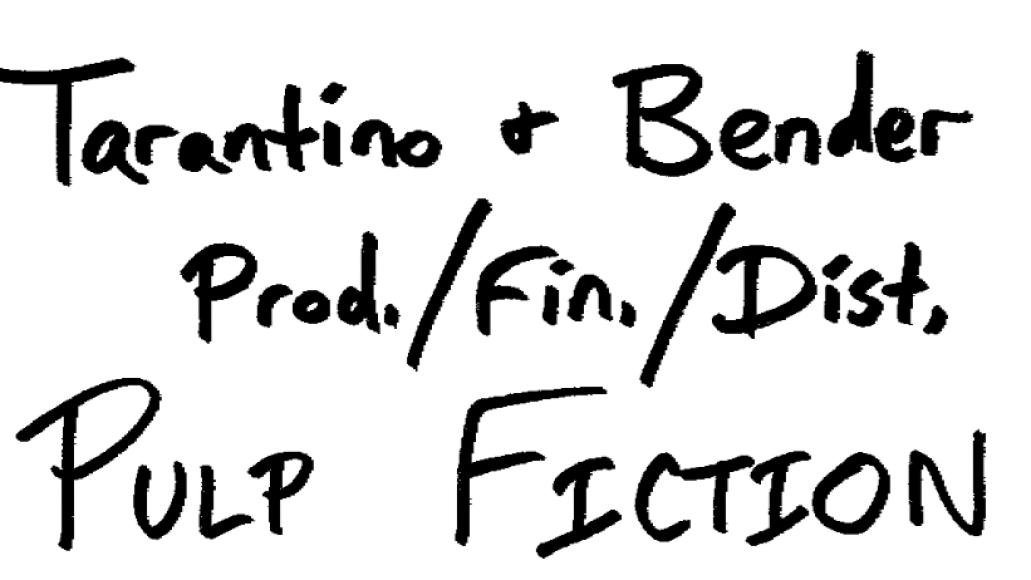