When Alex Luciano’s retina detached two weeks before Diet Cig was due to shoot two music videos in two days, she had no intention of rescheduling. The singer and guitarist who makes up one half of the lo-fi rock duo from New Paltz, New York, was forced to undergo emergency surgery, and she unfortunately re-emerged post-procedure with a distracting bloodshot in her right eye.

“My eye was looking so gnarly, we were like, ‘How are we going to shoot this music video with my eye looking like crazy?’” she recalls. “So Ben Hopkins from PWR BTTM was there, and he was like, ‘I’m going to give you the best black eye I can do.’”

Luckily, the Chris Daly-directed video for the song “Dinner Date” is set in a grungy bar and stars Luciano as a roughed-up arm wrestling ace, packing enough puissance to pulverize anyone who dares to challenge her. The black eye made a fitting addition to Luciano’s character.

Diet Cig have a way of commanding their own catastrophes and evincing the beauty within them. Most of their songs contextually involve breakups, heartaches, or the occasional Ivy League asshole, and yet the duo refuses to let their own downer topics bring them down.

“The funnest part of these songs is figuring out how to turn these quiet little songs into high-energy dance party songs,” Luciano says of the writing process with bandmate Noah Bowman. When she’s performing the songs, “it feels so much more cathartic on stage, totally blacking out to these songs that mean so much to me, and then hearing other people sing along and realizing they mean so much to them too.”

Diet Cig’s ability to create records with the sort of infectious anxiety easily assumable by their listeners is a major part of their appeal and, as Luciano found, serves as a mutually beneficial quality to their aesthetic. Fans hear their own frustrations in the music, knowing all too well the “ivy league sweater”-clad douchebag or waking in the morning smelling “like cigarettes and last night’s booze.” Luciano, in turn, finds camaraderie in the band’s audience as she watches them sing along.

“Nothing in the world has ever made me feel less alone,” she says.

At this point, that’s still a new feeling. Diet Cig only began making music a year ago, shortly after members Luciano and Bowman met at a house party that Bowman’s other band, Earl Boykins, was playing. “I don’t know why, but I walked up in the middle of their set and asked, ‘Hey, do you have a lighter?’ and he was like, ‘No…’ and he gave us a bottle of wine instead,” she recalls. “We hung out later and he beat me at thumb wars, and we’ve been hanging out since then.” 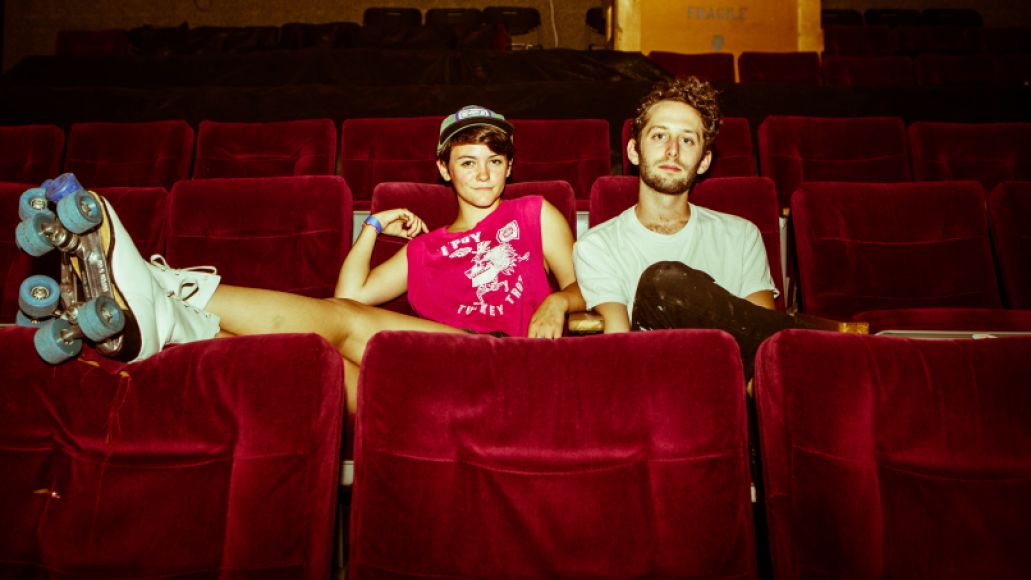 Writing music together came easy. Luciano had a wealth of material she had been working on in her bedroom on the sorts of topics everyone can relate to: the pressures of becoming an adult, summer ennui, and always painfully falling in love with the wrong person. Bowman was a motivating collaborator, and it didn’t take long for the band to release the five-song EP Over Easy in February 2015 via Father/Daughter.

“It’s total team mentality: I will bring a simple chord progression into it, and he will be like, ‘Ok, this is how I’m going to make this fun,’” Luciano says. “He totally adds the energy.”

Since they met at that house show, they’ve gotten very good at being fun together. In September, Diet Cig set off on their third US tour in 12 months to play all the material they’ve written so far. For the first time, the band climbed up onto actual stages, with more venues than house shows booked on their most recent run. It’s an upgrade whose importance is not lost on Luciano. She can’t keep from gushing about her excitement. “It’s so crazy. I’m calling my mom like, ‘Mom, they got me chips and guac! Oh my goodness, there’s a stage almost as tall as me!’”

With more space comes a bigger challenge. As with any band, there’s always the risk of losing the ability to maintain kinship with the audience when landing gigs with larger capacities. Diet Cig, though, isn’t worried.

“You can have a level of intimacy in a giant stadium if you know how to do it,” Luciano says. “I think one of our strengths is having an easy time connecting with the audience no matter where the venue is because, in general, it’s just very stripped down. It’s just the two of us.”

That connection is one of those important things to Diet Cig, and it’s been surprisingly easy to maintain, even after seizing more prestigious billings. They love to “dance with the audience” and want them to “feel like they’re part of it too,” because, in an endearing way, they are. The crowd is hearing Luciano’s personal thoughts set to music.

At least a small handful of listeners might have even been the (sometimes accursed) inspiration for some of her lyrics. “I want them to make the connection. I want them to know, ‘I’m singing about you right now, and this is how I feel about you,’” she admits. “A lot of times I never said those things to the person in real life, so this is almost my way of being like, ‘Hey, if you hear this, yeah, this is for you.’”

But even the haters have to admit that Diet Cig’s power is in their resilience. Black eyes and busted relationships can have an upside, and in many cases, those misadventures can take fortuitous new turns — just as long as you have the right mentality.