The Book Club is a recurring feature in which we read and discuss either a canonical piece of music writing or something fresh off the presses.

Patti Smith may always be best known as the “Godmother of Punk,” but these days the words she quietly puts to paper in a cafe are just as stirring as those she emotes into a microphone during a sold-out concert. After winning the National Book Award in 2010 for her first memoir, Just Kids, which documented and reflected upon her relationship with photographer Robert Mapplethorpe, Smith now returns with a second memoir, M Train — a collection that pulls through 19 stations along her latest stretch of track. While readers will immediately recognize Smith’s poetic prose and attention to detail, they’ll also quickly find that M Train completely abandons the structure and atmosphere of its award-winning predecessor. Then again, how surprising should it be that the “punk poet laureate” goes against expectation and switches tracks?

Read on to see the Book Club’s reaction to Patti Smith’s M Train. 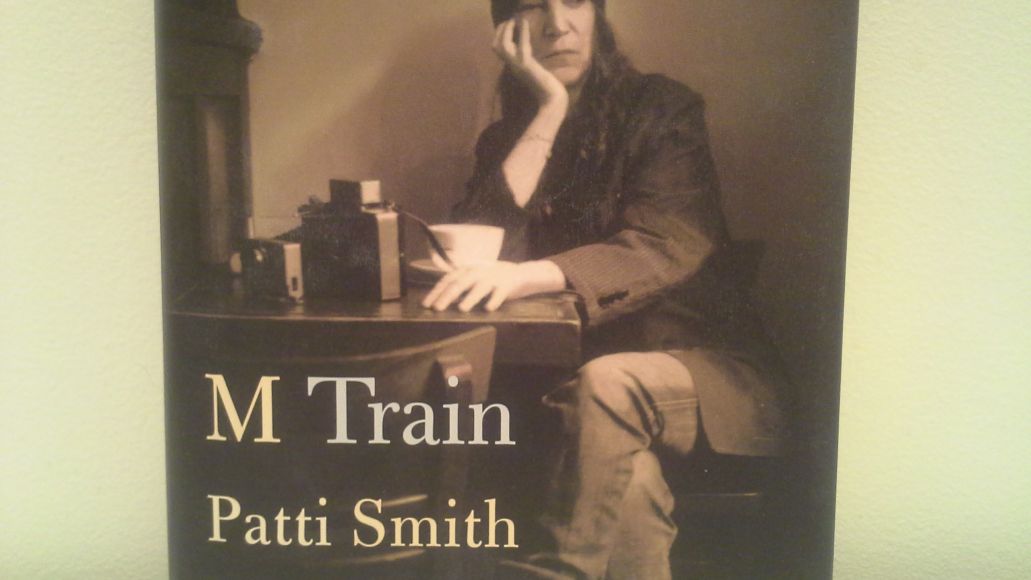 Megan Ritt (MR): I enjoyed the details of Smith’s serious coffee habit, her writing rituals, her obsession with crime shows (it’s refreshing to know that famous artists have their outlets also). The other part that really touched me, aside from Hurricane Sandy, is the meditation on lost things that begins in “Vecchia Zimarra” and runs in and out of the rest of the book. What does it mean to lose something, someone? To find something? To bring something home? Where do our things and our people go when they’ve left us, and how do we keep living in their wake? In that way, those details Smith does give us — even the ones I found precious in the beginning — were always enough. She says on the last page, “I’m going to remember everything and then I’m going to write it all down,” and that’s what she does here, every passing dream and reflection. And who can blame her for holding some memories back for herself? Smith lets us into her head in an extraordinarily intimate way here, and what she lets us see is whatever floats to the surface. It’s a different kind of a book and a rare gift indeed.

MM: “It’s not so easy writing about nothing.” That’s the first line of M Train, spoken to Smith by a philosophical cowpoke in a recurring dream. Well, it’s not so easy reading about “nothing” either, or at least what seems like nothing for the book’s first several chapters. M Train can be measured out in cups of black coffee, slices of brown toast, and dozens of dreams that usually occur after Smith dozes off in a chair, still cocooned in her jacket and watch cap. These are not the typical elements of a page-turner, and yet, nearing the book’s conclusion, I felt my fingers flipping faster and faster. Perhaps Smith’s triumph here comes down to her ability to gradually reveal how the mundane actually matters a great deal to her and to us. It’s a complicated, demanding read, but one that ultimately rewards and touches.

We usually talk about what we like first, but I want to flip that around this time. Megan, both you and I were huge fans of Smith’s Just Kids. However, I know we both grimaced a lot during the opening chapters of M Train. It wasn’t “hate-reading,” but it wasn’t far from it. Can we talk about that negative initial reaction to this book we ultimately both grew to admire?

MR: I was surprised by M Train. I avoided reading the press releases because I really, really loved Just Kids — it’s one of the best things I’ve ever read — and I didn’t want to come into the new book with any pre-conceived notions of what to think. It turns out I should’ve done some research, though, because had I known that M Train was so dreamy, I might’ve been less thrown by that at first. It’s an interesting concept, running freely through Smith’s daily life and rambling thoughts, but I was really missing the linearity of Just Kids. The chronology keeps that book focused in a way that M Train isn’t. All the travelogue stuff in the first chapter just didn’t do it for me. I was really looking forward to hearing more about Smith’s life, and her tales of wandering through exotic lands to collect romantic prison rubble was not what I was expecting. She has such a marvelous specificity to her writing and to her recollections, like the details of what she ate for lunch with Allen Ginsburg in Kids, and the beginning of M Train was so abstract that I was really turned off. The conversation with her television remote — oy. It was starting to feel a bit precious, not what I’d signed up for.

MM: If I have to highlight the differences between M Train and Just Kids — and I think any book-length prose project Smith works on will draw that comparison — I’d probably start by issuing this challenge: Sum up each book in a single line. That’s easily done in several different ways for Just Kids (e.g. a coming-of-age story of two young artists whose lives ran parallel for a few short years). Try doing that with the first half of M Train, and you’ll get less than nowhere — you’ll end up doubting there’s any point at all. And that’s a challenge Smith’s book issues to her readers. She doesn’t allow us to find any firm footing until several chapters in. We need to trust that the rummaging through old things, the daily pilgrimages to Cafe ‘Ino, and the excursions to address oddball groups (like the Continental Drift Club) will all eventually add up to something worth our investment. Smith, in a way, leaves us reading blindly, the only light being the promise of more pages to come and the burning hope of some semblance of elucidation. Luckily, that light does emerge, but M Train crawls through a dark tunnel for a very long time before we can see it.

So, what eventually won you over, Megan? 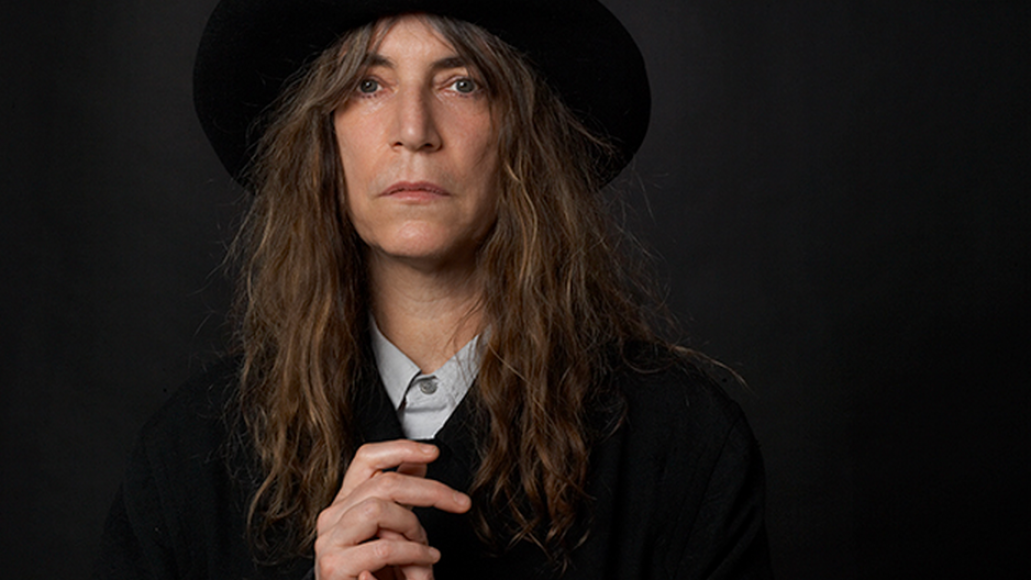 MR: I hung in through my initial reaction, and I got pulled in when she started discussing Murakami, who’s one of my favorite authors. Then she started to sneak little details about Fred in there, and gradually I got more absorbed. And then I got to “Her Name Was Sandy”, and I was utterly wrecked. The hurricane coming in, the city holding its breath, the mystical nature of storms and seasons: It all suddenly brings to the surface the most heartbreakingly simple remembrances of Fred’s passing. All of a sudden, it didn’t matter how we got there any more. Her love for him reverberates from those pages, echoes off the walls. This is the rawness, the open quality I loved in Just Kids; it just took her a while to come to it. I wept on the train, and when I got home, I held my boyfriend all evening. Her sense of loss is so palpable that it leaps from the page.

I also appreciated the feel of the book. From the moment you touch it, you can tell you’re holding an artifact, something written by someone who has a passion for the written word and for experiences. The paper is so thick and smooth that it feels more like an art book, and the deckle edging on the pages gives it a real sense of import. Smith’s photography, much like her anecdotes, is of varying interest: Some of the abstract images seemed only tangentially related to her point, but the more personal photographs of her and Fred and her home after the hurricane were really devastating. I kept paging back to look at them as I read on. Taken as a whole, it gives you a sense of how her artistic process works.

MM: The Murakami binge also drew me in. Not because I’m a fan or even conversant with his novels, but because, as a writer, I know that moment when another piece of literature (or anything really) opens a small portal into that part of the imagination that needs accessed in order to begin creating. It’s around that chapter in the book that we really begin understanding how Smith is sharing her writing process with us — chug by chug — and it’s a track that winds, doubles back, and sometimes seems to disappear all together, causing the train to brake and wait idly for more track to be laid. Again, this doesn’t always make for the most gripping reading. The reader must remain almost as patient as Smith as she pulls through seemingly irrelevant stations. But as that journey continues, we begin to understand how that marathon of crime dramas, a trip to Japan, or buying a battered house near the beach were all stations Smith needed to pull through, all those cups of black coffee and notes scribbled on napkins small sections of railroad to be crossed.

There are two key questions Smith raises in a passage fairly early in M Train: “I place After Nature back on the shelf, safely among the many portals of the world. They float through these pages often without explanation. Writers and their process. Writers and their books. I cannot assume the reader will be familiar with them all, but in the end is the reader familiar with me? Does the reader wish to be so? I can only hope, as I offer my world on a platter filled with allusions.” If nothing else, I hope that readers appreciate that Smith is sharing something so very intimate here, something as unique to who she is as her fingerprints: her writing process. Even after completing M Train, many readers may still wonder what exactly they’ve just experienced, but I’d urge them to consider Smith’s questions again. Are we familiar with her now, and are we glad for it? Both questions deserve a resounding affirmation.