Emotions were running high even before Pearl Jam kicked off their massive sold-out show at Mexico City’s 62,400-capacity Foro Sol, and for several reasons: The nearly three-hour gig marked the final night of the Seattle outfit’s month-long Latin America Tour, it was the first time in four years that they’d played the Mexican capital, and to top it all off, it was drummer Matt Cameron’s birthday. Frontman Eddie Vedder paid tribute to the percussionist during the second encore following a triumphant run-through of “Jeremy”, insisting that “he sits on a drum throne” instead of a stool “because he’s a fucking king.”

The inordinately high level of sentimentality might explain why the performance began on such a down-tempo note – Vedder & co. first crooned through slow-burners “Pendulum” and “Release” before picking it up (albeit only slightly) with “Elderly Woman Behind the Counter In a Small Town”, which felt like a pointed tribute to this eagerly waiting audience with the lyric: “I just want to scream … hello …”

Vedder followed this by saying his literal hellos in somewhat broken Spanish read from a cheat-sheet: “Hay raza, feliz de verlos de nuevo y bienvenidos ya la última noche del tour. Estamos felices de tocar el último show en México City. Están todos bien? Todos seguros? Aquí vamos!” Which roughly translates to: “My people, we’re happy to see you again and welcome to the last night of the tour. We are happy to play our last show in Mexico City. Are you ready? Here we go!”. The quintet then dignified the aforementioned “scream” by pulling out one high-octane song after another: “Why Go” led the seven-song run of likeminded cuts, which included relative rarity “Breakerfall” and ended in all-star fashion with guitarist Mike McCready jumping into the pit and letting fans in the front row strum furiously at his six-string while he handled the fretboard. 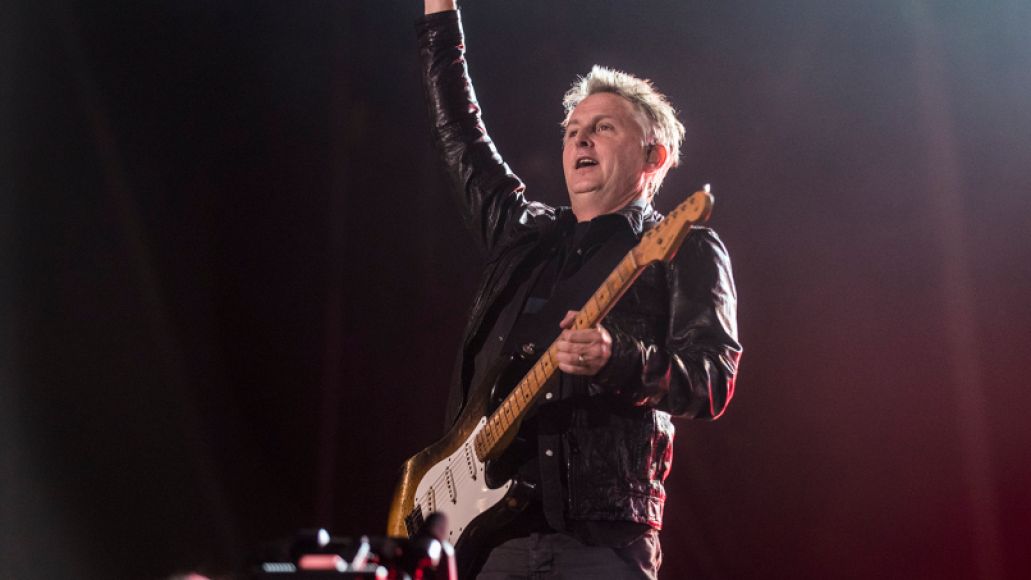 Plenty of moments incited that sort of primal, rock-driven catharsis. There was the oh-so-Floydian extended jam on main set-closing classic “Rearviewmirror”, where Cameron’s increasingly rollicking pace acted like a cosmic wind to clear out the clouds and reveal an almost-full, strikingly yellow moon hovering directly above the stage. There was the repeated chant in reaction to a searing rendition of “Black” — “Ole! Ole, ole, ole! Pearl Jam! Pearl Jam!” – that stunned the entire band into smiling stillness for a full minute.

And, during the back-to-back second encore finale of Neil Young’s “Rockin’ in the Free World” and “Yellow Ledbetter”, there was the ceremonial throwing of tens of thousands of beer cups amid awe-inspiring all-in choruses. As a first-timer at Foro Sol, this tradition – a custom during the final encore of every show at this colossal venue – literally dropped my jaw for the two-song span. Yes, it’s a bunch of trash flying all over the place, but I’ve never seen a comparable show of support at any similarly sized U.S. concert – it was fucking inspiring.

That said, the gig’s true consequential moments – the occurrences that made this occasion historically significant – came during Vedder’s frequent heartfelt interjections:

— The presentation of a cookin’cover of Eagles of Death Metal’s “I Want You So Hard (Boy’s Bad News)” as a way to “send love and happiness as an act of defiance” directed at the ISIS terrorists (likewise, Cameron’s kick drum depicted the Eiffel Tower, and Vedder sported the Eiffel-turned-peace-sign graphic on his t-shirt)

— A simple shout-out to 12-year-old fan Rebecca from Atlanta, who requested that the group play “Animal” for her dad, Michael, “the best dad”

— The (overwhelmingly answered) plea for everyone to sing John Lennon’s “Imagine” to honor the victims of the Nov. 13 Paris attacks (a for-real tear-jerker made even more epic by punctuating it with the proper psychedelic punch of Pink Floyd’s “Comfortably Numb”)

— The dedication of “Faithful” to a girl Vedder had spotted in the front row multiple times over the past month’s tour (he went so far as to climb down from the stage, hold her hand, and serenade her for its duration)

— A farewell to “Legs” – the band’s cameraman for 28 years, who celebrated his final show this night – by kick-starting the second encore with clap-along Wayne Cochran classic “Last Kiss” 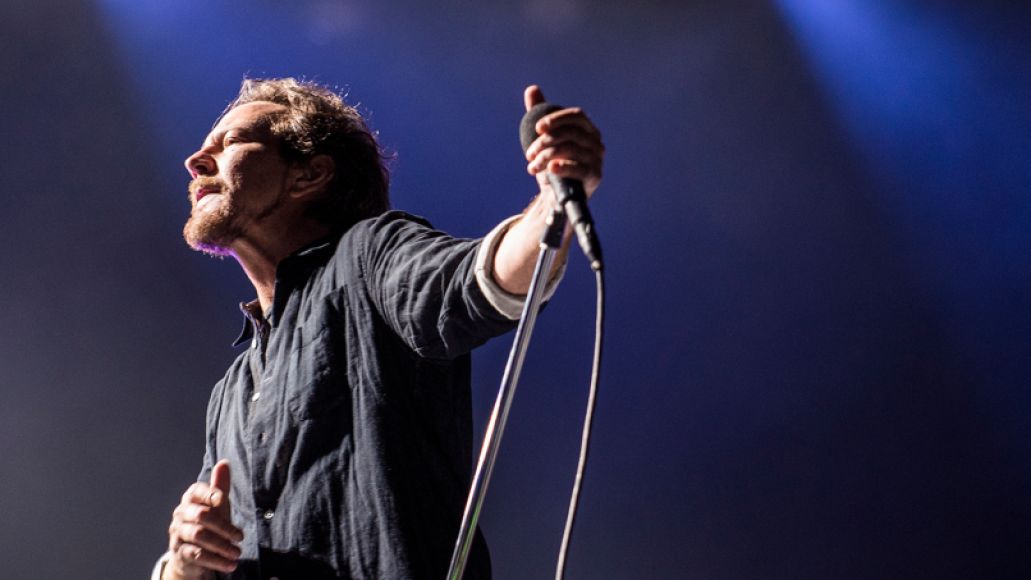 Each incident was so incredibly humanizing. It was wonderful to witness this titan rock band of 25 years eschewing the phone-it-in-for-a-paycheck path taken by so many other artists at a similar level of supremacy. I suspect that for many in attendance, the experience was life-changing. Between the emotionally charged moments and my first brush with the positively stunning fanfare of Foro Sol, I know that it was for me. Vedder summed up the larger-than-life event best before the first encore, “Unless you’re actually here right now, you wouldn’t believe it – this is really special.”