One of the worst things you can say to someone who doesn’t care for a movie you happen to enjoy is “you didn’t get it.” What is that supposed to mean, exactly? “You didn’t get it” is an undermining and fool-headed assumption, a shortcut to avoid explaining your opinion because you “got it” while the other person didn’t. In reality, both of you totally understood the movie you just watched, and one of you liked it while the other one didn’t. The messages were received, but what was lost in translation was entertainment. It’s as simple as that.

I say all that to say this: Rick Alverson’s Entertainment will be admired by just as many people as it will be despised. Working alongside co-writers Gregg Turkington and Tim Heidecker, who contributed to 2012’s equally polarizing “comedy” The Comedy, Alverson has followed up with a bleak and exhaustive look at the life of a permanently detached comedian (Turkington) traveling through the deserts of the American southwest one gig at a time. At its base level, Entertainment is about misery and the failure to communicate. On another level, it captures the day-to-day monotony of being a struggling comedian. In the end, we are witnessing what happens to someone who is permanently stuck in their job, unhappy, and resigned to the fact that this is who they will be for the rest of their life. With Entertainment, Alverson captivatingly captures a man nearing his breaking point, trudging through a professional and personal purgatory.

We meet The Comedian, also known as Neil, walking up the steps of a gutted plane during a tour of an airplane graveyard. An old, yellow hat featuring a Chinese restaurant logo sits atop his head, and he wears a faded dress shirt with a “Pete’s Fish and Chips” shirt underneath (the latter of which is revealed later, a reference to a restaurant Turkington frequented in his youth). Neil has wandered away from the rest of the tour, something he does during every tour he takes when on break throughout his comedy jaunt in the Mojave Desert (the Five Easy Pieces’ oil fields and an old west town are two other examples). Neil can only be with strangers for so long before he feels compelled to leave, aimlessly wandering through a life that gives him opportunities to connect with strangers briefly instead of chances at forging any meaningful friendships.

Neil’s onstage character is a crude parody of old, lounge-act booze hounds who goes by the name of “Neil Hamburger” (the same persona Turkington takes on in his real-life stand-up act). Hamburger is a greasy-haired, tux-wearing comedian who is always carrying extra drinks in one hand while holding a mike and drink with the other, spouting off inappropriate jokes about Courtney Love, T.G.I. Fridays, Madonna, Sir Elton John, and one about Crosby, Stills, and Nash that I can’t reveal here because it’s beyond crass. Audiences in the desert don’t get his act, especially the ones in dive bars and Spanish-speaking joints (apparently some of the sets were performed before real, unsuspecting audiences). However, they do seem to respond to a pantomime act Neil tours with, played by the all-grown-up-now Tye Sheridan (Mud, Joe).

Even when Neil attempts to communicate with people offstage, there is always an invisible barrier preventing him from doing so. Neil loses his well-meaning but dopey rich cousin John (John C. Reilly) in an orange grove, and when he asks a nearby picker if he’s seen him, the man can only respond in Spanish. In a helicopter ride with John, he has to be told to speak into his headphone mike after an answer to a question goes unheard. A chromotherapist (Lotte Verbeek) Neil manages to share a drink with is more interested in color as means of expression than words (red and blue light several fantasies in the film). He is left alone during an optometry test, repeated calls of “Hello? Hello?” reaching no one in the empty room. The most devastating moments arrive via the voicemails he leaves for his daughter throughout the movie. Casual calls checking in become more weary and disturbing as the movie progresses (“Do you believe in God?” proves to be the most chilling).

His monotonous days soon turn nightmarish during scenes featuring an after-hours game of Marco Polo, a rest stop encounter with an appropriately creepy Michael Cera, and another rest-stop interaction that won’t be spoiled here. This grim scene actually features the film’s lone moment of true appreciation for Neil, arriving in the hint of a smile. It’s so subtle that the only person aware of what is happening is the woman offering it; Neil remains ignorant as he looks away in stunned silence over what’s just transpired.

Entertainment is filmed in 2:35:1 widescreen to make sure you see and feel every moment of empty space surrounding Neil. The story further skews the space between who Gregg Turkington the actor is and who he plays on screen to dizzying effect. It’s as aggressive as a boxing match despite long stretches of wordless expression. It will infuriate many but should at the very least initiate lively discussions. For those who respond in the positive, Alverson’s direction and Lorenzo Hagerman’s cinematography create a beautiful portrait of an ugly existence. Is your life best symbolized by Neil’s recurring dream (memory?) of himself as a sad and imprisoned rhinestone cowboy? For sanity’s sake, I hope not. 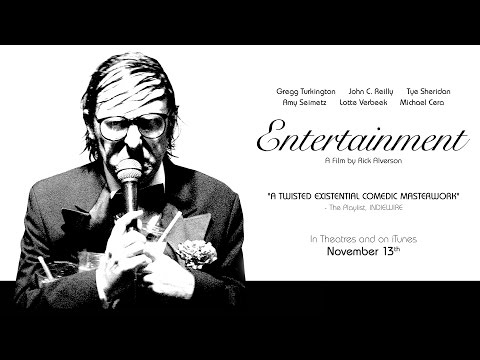