History repeats itself. Flip through the pages of any textbook and you’ll be quick to find a number of incidents that parallel something that’s happened in your own lifetime. The Star Wars universe, especially judging from the polarizing prequel trilogy, works the same way. Recurring tropes have oscillated from one end of its galaxy to the next, everything from one-liners to character arcs, namely because George Lucas’ story essentially boils down to the timeless and not-so-interchangeable battle between good vs. evil — or more specifically, the light side vs. the dark side of The Force. So, it’s not the least surprising that J.J. Abrams’ highly anticipated Star Wars sequel, The Force Awakens, comes off as a surreal echo of the 1977 original.

Thirty years have passed since the Rebellion’s decisive win at the Battle of Endor. Despite the feel-good Ewok after-party, things aren’t so fine and dandy for the galaxy these days. The Galactic Empire is old news, but there’s a new band of Nazi-inspired evildoers called The First Order. Led by Supreme Leader Snoke (Andy Serkis, in full mo-cap) and carried out by Darth Vader Superfan Kylo Ren (Adam Driver, in full emo), these jerks want to pick up where Palpatine left off, and they plan on doing that with an updated fleet of Star Destroyers, an underused Chrome Trooper, and a grander version of the Death Star they’ve dubbed the Starkiller Base. The only issue? The Resistance knows how to find the one man who can stop ’em.

You got it: Luke Skywalker.

If this all sounds familiar, it should: There’s a cute astromech droid (BB-8) with key plans (Skywalker’s whereabouts) that roams a new desert planet (Jakku) and changes the boring and hopeless life of a lone scavenger (Daisy Ridley’s incredibly resourceful Rey). Things escalate rather quickly, though, when she and the droid stumble into an AWOL Stormtrooper (John Boyega’s hilarious Finn), who has the First Order hot in pursuit after he freed Resistance fighter Poe Dameron (an ever-excellent Oscar Isaac) and shot up half a dozen TIE Fighters in the process. Together, Rey, Finn, and BB-8 find the closest ship nearby (“the fastest hunk of junk in the galaxy”), and, well, that’s when their story truly begins, leading to familiar faces and distant places.

Don’t be surprised or disappointed if the more cynical fans start referring to The Force Awakens as Star Wars: The Reboot. They’re not exactly wrong. Similar to this summer’s Jurassic World and Terminator Genisys, Abrams reconfigures a familiar story for new audiences and eschews the “remake” or “reboot” tag by calling it a sequel. Unlike those two garbage follow-ups, however, Abrams actually did some research and figured out why so many treat the original trilogy as scripture and executed as best he could. This is why he shot on film, capitalized on practical effects, brought back The Empire Strikes Back screenwriter Lawrence Kasdan, and paired the new characters with those everyone dresses up as on Halloween.

It’s blatant fan service, sure, but it’s a smart and necessary move. Too many backs were turned following the prequels, not to mention the Special Edition surgeries over the past two decades, and it was imperative for Disney to retrieve the audiences that made Star Wars such a household name from the get-go. (Don’t believe me? Look at the lackluster grosses for 2012’s 3D re-release of The Phantom Menace. There’s a reason why we never saw the rest.) No, if there was going to be a new life to this franchise, they’d have to look back — as in way, way back. Which is why there’s been such a nostalgic promotional push, from retooling old posters to issuing comics set between A New Hope and Empire to hyping video games with childhood wonder.

Needless to say, they got the job done with The Force Awakens, and while Abrams pays more homage than he rightfully should, he also introduces the most exciting characters Star Wars has seen since, not going to lie, Lando Calrissian and Lobot. Finn, Rey, Poe Dameron, and even the adorable BB-8 actually insist upon further adventures, which is something few would ever say about all of the prequel characters not played by Ewan McGregor. They feel like human beings; they’re relatable, quotable, compelling even — they have a purpose! As Abrams told Time in their recent Star Wars cover feature, “This is a story of disparate orphans who discover each other, and who discover that they can trust each other.” No kidding.

In a sense, they’re us. They know about the stories of The Force, they consider Luke Skywalker to be a mythological hero, and they’re just as jaded about their lot in life. Much like any young adult surviving in today’s post-9/11 world, they’re the ones who are expected to pick up the trash left behind by their parents. As such, there’s a punk rock ethos to Rey and Finn that’s equally prescient yet also spiritually reverent to the original trilogy. It’s an unexpected breath of fresh air that surprisingly feels more nostalgic than any of the token callbacks, if only because it’s been so long since we’ve felt inclined to root for anyone in this series. On that same note, those who have always pined for more Wedge Antilles will absolutely worship Mr. Dameron.

What helps is that they actually exist in a tangible world. Ever since he signed on, Abrams has been adamant about avoiding any CGI when he doesn’t have to, and that wasn’t simply smoke and mirrors. New locales like Jakku, Takodana, D’Qar, and Hosnian Prime all feel very lived-in, thriving with bold architecture and inventive creatures that can best be described as vintage — and also stunning. How they’re paired with today’s digital effects (Lupita Nyong’o’s Maz Kanata, for one) should send shivers down the spines of anyone who grew up marveling at the dinosaurs in Jurassic Park or the T-1000 in Terminator 2: Judgment Day. It’s a fitting closer to a year where practicality reigned supreme (see: Mad Max: Fury Road, The Martian).

But the stinky Tauntaun in the room that we’ve yet to discuss is the original cast. Rest assured, Harrison Ford is still Han Solo, and the seasoned actor has way more fun here than he did seven years ago on that ill-fated Indiana Jones sequel, The Kingdom of the Crystal Skull. His playful banter with Chewbacca (Peter Mayhew) will leave you smiling from cheek to cheek, and his witty remarks will have you reeling. Carrie Fisher, meanwhile, does what she can with the little she’s offered — unfortunately, way too much exposition in one scene — but should remain the Princess in most people’s eyes. Outside of that, there’s a choice appearance by Anthony Daniels’ C-3PO … and the others are best left as a surprise. 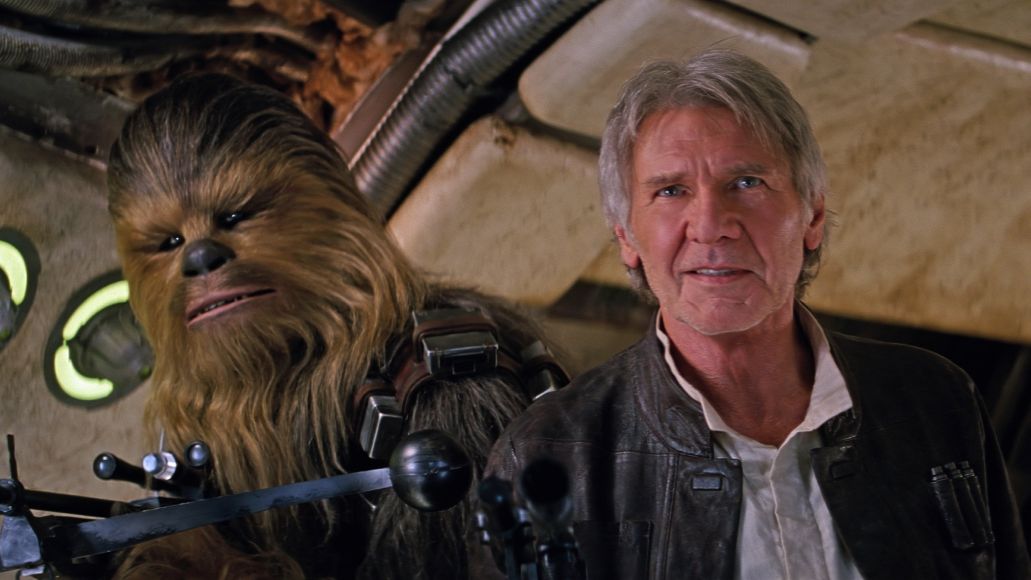 Speaking of which, there are a few surprises in The Force Awakens, and if you’ve kept kosher and avoided any spoilers, you’ll likely lose your popcorn a number of times throughout the film’s 135 minutes. Now, over the past two years, there’s been a lot of online chatter about whether or not Abrams would attempt to have his own Empire moment, and, without revealing too much, he certainly accomplishes that task. Some of the twists and turns are haphazard at best, though, which is why much of the preceding stakes involving the dark side hardly bruise. Still, Abrams and Kasdan’s respective humor and pathos push the characters beyond some of the more rote and redundant storytelling. So while it’s not always compelling, it’s always fun.

Is that enough? For most, yes. For diehards, probably not. But that really shouldn’t matter so much this time around. Again, the most crucial thing The Force Awakens needed to accomplish was to feel like a Star Wars film again, and that’s something this film does with ease. It’s funny, it’s beautiful, it’s ambitious, and it speaks to a promising future. Having said that, it’s mildly disappointing the film couldn’t be a little more than an endearing thrill ride. Is it the best Star Wars film since 1983’s Return of the Jedi? Without a doubt. Then again, that’s like calling Obama the smartest man in the White House since Clinton. What would be impressive is if any of the future sequels could be better than Return of the Jedi. Most impressive.

As they say, history repeats itself.