Long before Quentin Tarantino and Robert Rodriguez collaborated on the ambitious double feature Grindhouse in 2007, the two indie darlings of the ’90s began their long-standing cinematic friendship with 1996’s From Dusk Till Dawn. Coming respectively off of ’90s cult hits Pulp Fiction and Desperado, the two had the American independent film scene in the palms of their hands. That they would choose to make something as schlocky, offbeat, and downright cheesy as From Dusk Till Dawn is something of a minor miracle, even two decades on.

As a genre experiment, From Dusk Till Dawn is fascinating in how cleanly it divides the unique aesthetics of both its auteurs into distinct halves. The first section is a tense, crime drama about the bank-robbing Gecko brothers, Seth (George Clooney) and Richie (Tarantino), sneaking across the border to freedom after a crime spree, with an innocent family of hostages in tow. Forty-five minutes in, Dawn  takes a hard left turn into Crazyville when our heroes find that the Mexican bar they’ve holed up in is a trap for vampires to lure and kill unsuspecting humans. There’s no foreshadowing, no TV reports in the distance, not a word about blood-sucking ghoulies — until Salma Hayek’s head whips back to morph into a grotesque snake-like creature (courtesy of creature-effects powerhouse KNB Effects Co.) and starts chewing into Quentin Tarantino’s neck. Bam.

Luckily, Dawn manages to make these tone shifts inexplicably work, as the patchwork nature of the film strangely adds to the film’s cheezy, exploitation-movie charm. At first, Dawn feels like a strange love child of the works the directors were known for up to that point — with the Geckos dressed like Jules and Vincent, but weaving around convenience store aisles shooting pistols like El Mariachi. The opening scene is itself a microcosm of the way their two styles interact: John Hawkes and Michael Parks (playing Ranger Earl McGraw, a character he would reprise in future films by both filmmakers) start the movie with a chatty scene straight out of True Romance, until bullets start flying and Rodriguez’s love for over-the-top action takes hold. Tarantino’s screenplay deftly lays the groundwork for the balls-out second half without the viewer even realizing it: Seth’s sense of responsibility for his clearly demented brother Richie; disgraced priest Jacob (Harvey Keitel) and his crisis of faith; and Juliette Lewis’ rebellious Kate being charmed by the allure of criminal life. All contribute to the gradual bonding of this raggedy band of outlaws.

The second half, meanwhile, sees these characters thrown headlong into a balls-to-the-wall version of a Hammer horror film, and everyone — including Jacob’s meek kids — suddenly turn into holy-water-balloon-throwing, crossbow-shooting badasses. (“All right, vampire killers … let’s kill some vampires,” Seth quips before revving up his stake attached to a jackhammer.) By the time the bloodsucking beasties arrive on the scene, all the stabbing and shooting becomes redemptive for Seth, Jacob, and crew. Sure, Harvey Keitel’s a short-sleeved man of peace, but there’s something dumbly earnest about his last stand, armed with a cross made out of a baseball bat and sawed-off shotgun. Clooney, in his first major film role since leaving ER, shows glimmers of the movie star he’ll become, even though he occasionally has trouble getting his mouth around Tarantino’s self-consciously cool dialogue. Tarantino, meanwhile, weirdly gives his best (well, least bad) performance here. He’s no actor, but Richie’s socially stunted, withdrawn nature fits well with Tarantino’s inherent dorkiness. 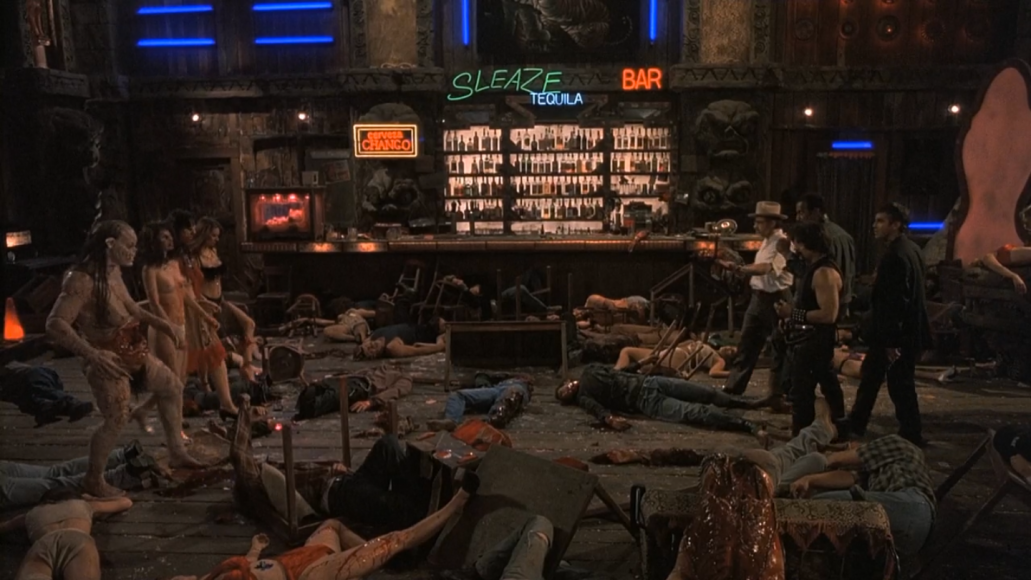 While the film’s marketing certainly did it no favors in keeping the mid-film genre twist a secret (posters full of fangs and bats, vampires all over the trailer), From Dusk Till Dawn came out in that bright, shiny era of the video store, where you could pick up a random film without knowing much about it and be completely blown away. When I showed this film to my girlfriend, I made special care to not reveal the twist: I swiftly moved past the cover image on Netflix, refused to tell her what the film was about (“It’s a Tarantino movie with George Clooney, you’ll love it”), and just let the magic happen. Without the hindrance of promotional materials or outside expectations, her eyes bugged out as soon as the vampiric bloodbath began, and the astonished, gleeful screams of surprise began.

It’s that kind of reaction, I think, that we all hope for in a film sometimes: that little endorphin rush of being surprised, of having something we genuinely didn’t expect thrown in front of us. I don’t want to come across as reactionary (especially since getting that pure, unspoiled experience was rare even when Dawn was released), but I couldn’t imagine that kind of twist being hidden from an audience in a world where most of us spent the last three years poring over the Internet for Force Awakens spoilers. Dawn’s heel-turn, properly executed in the right environment, is downright quaint now in the age of the Internet hype machine and websites dedicated to telling you what happens at the end of movies. 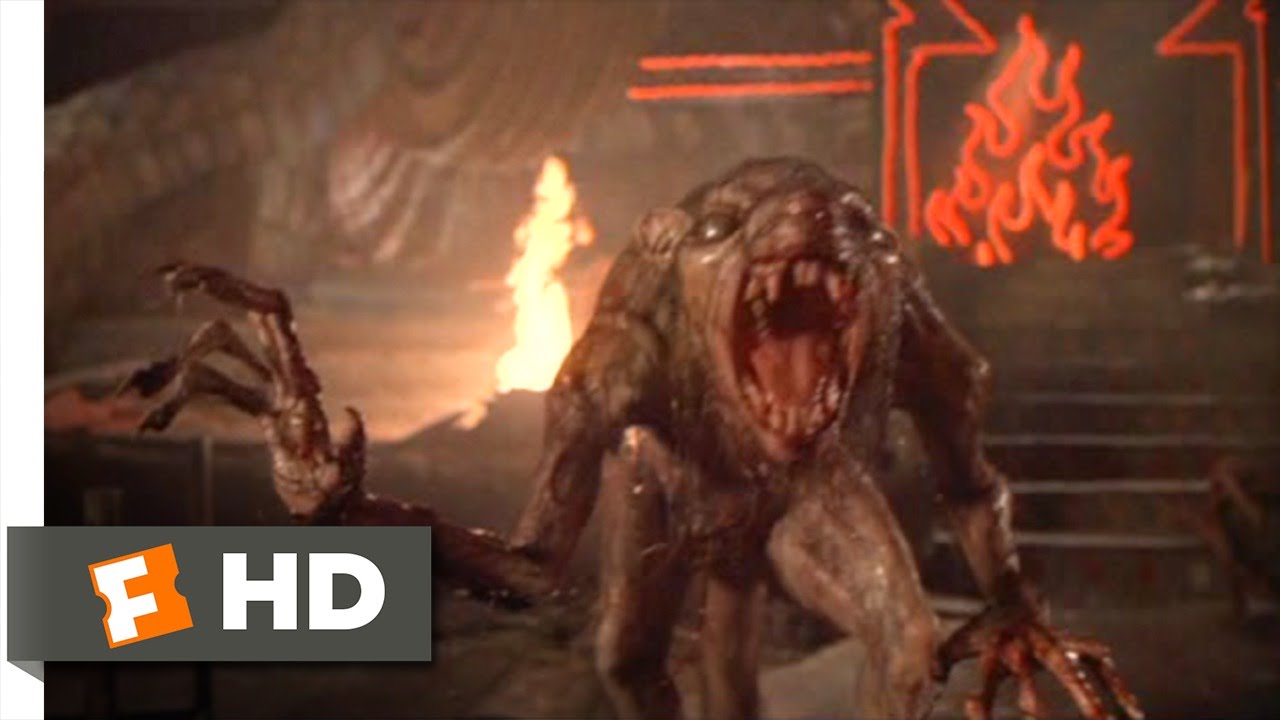 Little could Tarantino and Rodriguez have known that they were making their finest homage to the low-budget, low-class films of the ’70s — better than anything they’d attempt together in 2007. Even if Tarantino’s Death Proof  has been somewhat reclaimed critically in the last few years, there’s something about the whole Grindhouse project that seems cynical even today – the kind of calculated measure to deliberately recreate the aesthetic of the grindhouse film while covering it in a sheen of detached irony. “See, guys? It’s a grindhouse film because it looks bad!”

Dawn, by contrast, is deeply unironic, a wholehearted celebration of the downright silly things they wanted to put on a movie screen. It’s that sense of fun that makes Dawn a wonderful example of modern schlock, throwing everything two filmmakers at the top of their respective games love about the B-cinema of their youth into a filthy, energetic, and (if you play your cards right) surprising experience.

From Dusk Till Dawn Turns 20