The most important scene in Indiana Jones and the Kingdom of the Crystal Skull occurs nowhere near the climax. About 15 minutes into the film, a geriatric Indy darts his way around an artifice of comfortable 1950s suburbia before realizing that his only company is an elaborate setup of plastic, soon-to-be nuclear families. When sirens blare, signaling his impending doom by way of an atomic bomb test, he panics and finds shelter in the only place equipped to protect you from that sort of thing: a lead-lined refrigerator. 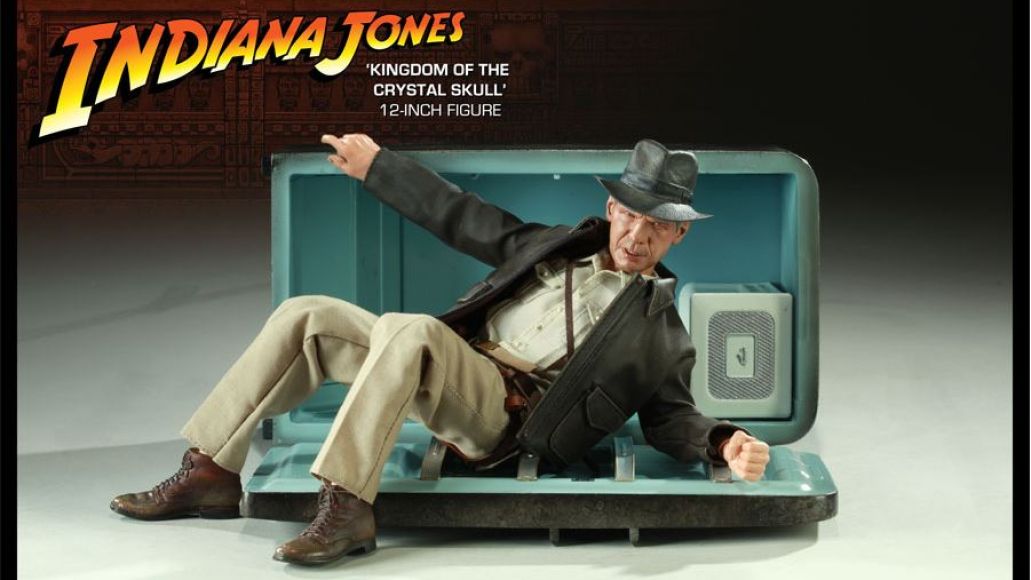 Once Spielberg and Lucas blasted the fridge, general moviegoers would store very little of what followed in their memory banks (but die-hard Indy fans would cringe for years to come about all the alien claptrap). Although it was somewhat well-received upon release — Crystal Skull holds a 78 percent on Rotten Tomatoes — the third Indiana Jones sequel has since turned into a cinematic speed bag, and it’s largely owed to that one preposterous scene. Just days after the sequel’s release, “nuke the fridge” began making the rounds on IMDb message boards, Urban Dictionary pages, and film blogs. For a minute, it seemed like the phrase might have the potential for “jump the shark” levels of ubiquity.

Despite this swift reversal from modest critical approval and box office success, Crystal Skull was hardly an outlier — a swath of mediocre blockbusters were reduced to meme-worthy moments during the same time period. Spider-Man 3 had its goth-Peter Parker dance sequence. Superman Returns had the bullet in the eye. The Star Wars prequels had Jar Jar Binks. And yet, all of the aforementioned films, with the exception of The Phantom Menace, maintain fresh scores on Rotten Tomatoes.

Aggregated scores may certainly not be the most revealing metric as a film ages, with many critics forced to make a snap judgement after one screening. But sometimes those early reviews can reveal honest, unfettered enthusiasm that might fade after counteractive online consensus-building takes hold. We recently laughed at the semi-viral video of fans reacting with raves to The Phantom Menace, but how can you fault them for expressing genuine takes? The 16-year drought might have come with a complementary pair of rose-colored goggles, but the video also illustrates a far less self-conscious reaction to art than we’re used to today.

Today, the average moviegoer has several indicators of what the critical or Internet consensus on a film might be before even walking into the theater — and just as many conflicting indicators after the credits roll. Even if these blockbusters simply flirt with mediocrity, like a Spider-Man 3, GIFs of sad-puppy Peter Parker or emo-Peter Parker can pop up on many a Tumblr or Twitter feed and transform shrugs into full-blown derision. It’s not to say that everyone who reposts Tobey Maguire GIFs hates the original (and far superior) Spider-Man trilogy, but it very well may contribute to Spider-Man 3’s regular and inexplicable appearances on “worst superhero sequel” lists. The final Raimi-Maguire effort might have had too many villains, a campy disposition, and a bloated final act, but it was still far from a total disaster. You wonder if some fans forgot that a film is thousands of moving pictures instead of a small handful, looped on repeat.

This past summer, we saw the birth of an historic flop in real-time with Josh Trank’s Fantastic Four reboot, which was enough of a fridge-nuker to long for the days when it was normal to Google: “How do you pronounce ‘Ioan Gruffudd?’” Trank’s Fantastic Four was the rare blockbuster that telegraphed its own unraveling just before its debut. Rumors circulated of on- and off-set hysteria, including a mistreated crew, clashes with studio heads, and extensive re-shoots. Trank even condemned the film on Twitter less than 24 hours before its release, alluding to a “fantastic version” of it that we’ll probably never see — in a post which he quickly deleted. 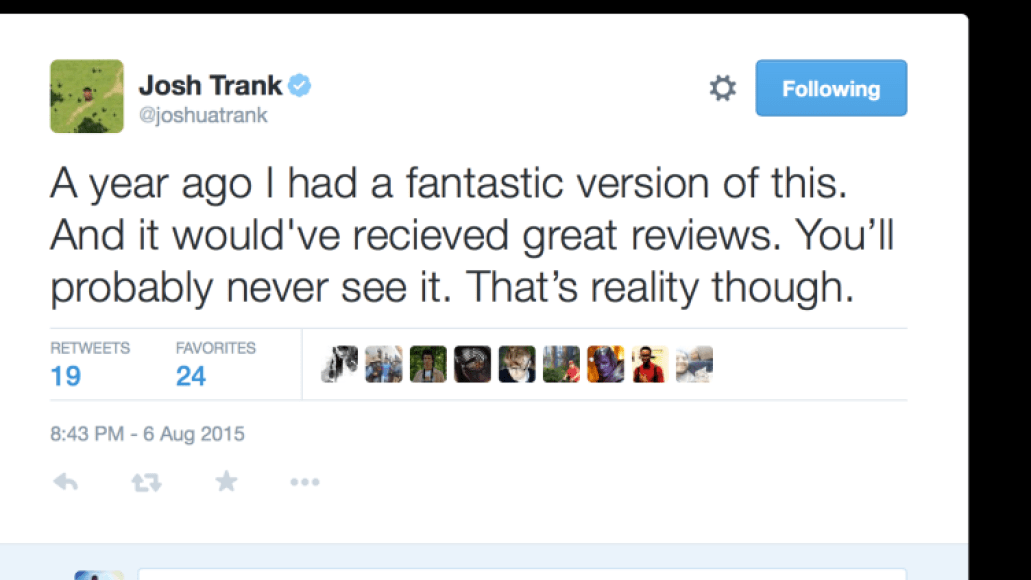 The movie we ended up with seems to affirm much of the alleged onset turmoil. For more than an hour, the film’s capable leads science the shit out of us in a plodding lead-up to being cursed with their powers. At this point, we get a taste of what Trank’s “fantastic version” might have looked like, with some genuinely effective body horror, as the four seem petrified by their new abilities. But the film discards any and all momentum with a jarring one-year time leap to a point when the four are highly comfortable with their powers and employed as government weapons. Trank — or the studio, depending on who you believe — breeze through an incoherent whirlwind of a climax that regards the comic’s most notable villain as a throwaway addendum. 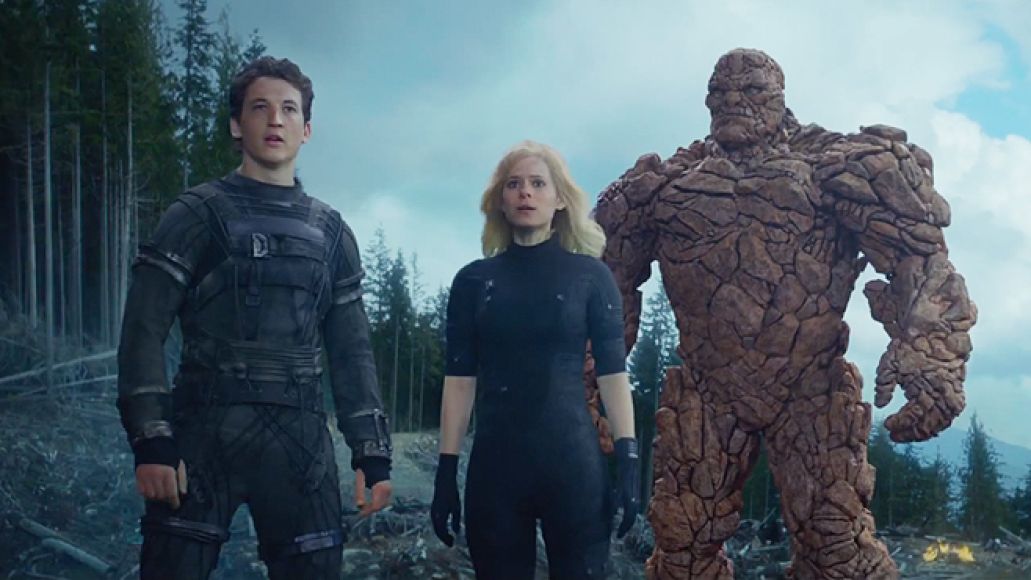 So many things go wrong in the latest update of Fantastic Four that it’s almost meme-proof — to hone in on one particular moment or image would be a challenging task (I’ve seen some settle for a fully nude still of The Thing). Although Fantastic Four is still very much a product of this GIF-friendly blockbuster environment. 2005’s Chris Evans and Jessica Alba-led take on the foursome and its sequel never quite drew the intense reactions of Spider-Man 3, but were still bland enough for Fox to green light an overhaul just eight years later. The more meme-friendly franchises brought about some even quicker turnarounds: Spider-Man 3 gave way to The Amazing Spider Man just five years later. Superman Returns led to Man of Steel in seven years. Star Wars just returned after a 10-year hiatus to break all the box office records. And Indiana Jones will likely morph into Chris Pratt sometime before the decade’s over.

Aside from the obvious cash rewards, responding to underwhelming blockbusters with reactive reboots ensures that a mishap doesn’t get the last word. As Star Wars: The Force Awakens has proven thus far, a successful “legacyquel” can begin to fan the flames of past failures. But if studios continue to replay these properties with updated casts, like the finite frames of a GIF, then none of us will live to see the final chapter.