Over the last week, YouTube has come under criticism from a number of prominent musicians who say the video platform is profiting off of stolen content. In a recent interview, Trent Reznor accused YouTube of being “built on the backs of free, stolen content,” an opinion which was backed up by The Black Keys’ Patrick Carney. “Give me five minutes on YouTube and I probably can find 250 songs that are available which the artist isn’t getting paid for,” Carney said. “At least.”

Now, Billboard reports that 180 musicians have signed a petition calling on Congress to reform the Digital Millennium Copyright Act, with particular attention paid to YouTube. Sir Paul McCartney, Taylor Swift, Kings of Leon, and Vince Staples are among those who signed the petition, which asks for “sensible reform that balances the interests of creators with the interests of the companies who exploit music for their financial enrichment.”

Update: U2, Pearl Jam, Rush, David Byrne, Jack White, Trent Reznor, Beck, Ryan Adams, St. Vincent, The Black Keys, Chris Cornell, Elvis Costello, Lionel Richie, Lady Gaga, TV on the Radio, Miguel, and Spoon are among the many other artists who signed the petition, which you can see in full below.

Enacted in 1998, the DMCA gives services like YouTube “safe harbor” from copyright infringement liability as long as they respond to takedown notices from rights holders. Given the sheer volume of content available on YouTube, many infringing uploads go undetected and are accessible for free to the general public.  This loophole “has allowed major tech companies to grow and generate huge profits by creating ease of use for consumers to carry almost every recorded song in history in their pocket via a smartphone, while songwriters’ and artists’ earnings continue to diminish,” the letter notes.

Additionally, the musicians say YouTube’s practices have diminished the value of premium streaming services such as Spotify and Apple Music.

Last week, following Reznor’s initial criticisms, YouTube responded by pointing to the $3 billion in royalties paid out to artists. However, the company added that “the voices of the artists are being heard, and we’re working through details with the labels and independent music organizations who directly manage the deals with us.” Billboard notes that YouTube is currently negotiating new deals with major labels, including Universal Music.

The petition will be published as an ad on websites such as Politico, The Hill, and Roll Call. 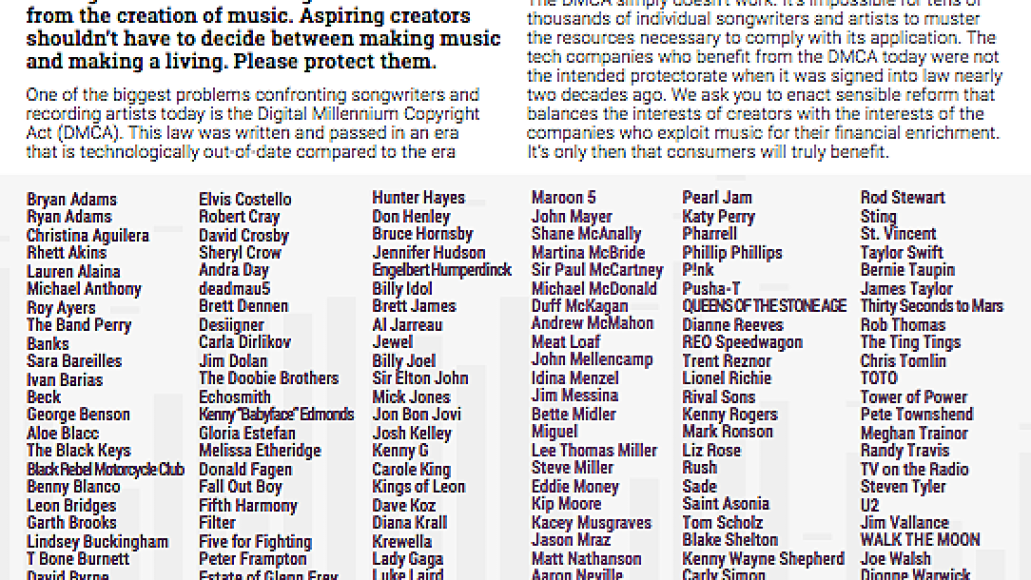