Artists have tried everything to get audiences to put away their cellphones and watch the damn show. From gentle requests at the beginning of concerts to actual bags that lock up mobile devices, it’s all been attempted, and none of it is satisfactory. Some people will just always find a way to snap that chat or take that video. Well, leave it to Apple to come up with a piece of technology that solves the problem regardless of the smartphone owner’s compliance.

As 9to5Mac and Patently Apple were first to note, Apple has just received approval for a patent on complicated technology that could disable a phone’s video and camera capabilities in certain settings. A small sensor placed on or near the stage would admit infrared signals containing encoded data that, when picked up by a compatible device, could disable a smartphone or tablet’s camera function. There’s even an image in the patent paperwork demonstrating just how this would be used to prevent unwanted recorded during concerts. 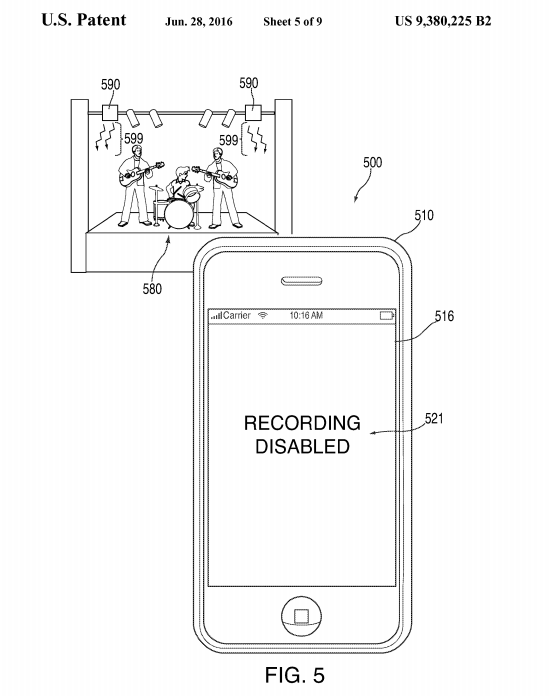 But the technology wouldn’t only be useful for thwarting Snapchatting and bootlegging concertgoers. The patent also details how the transmitter could be used in high security or classified facilities to prevent, say, a crook casing a bank or a spy, well, spying. It could even be used to provide extra information instead of removing it, like placing a transmitter near a particular work of art at a museum, for example; the phone could decode the infrared signal and provide information about whatever you’re looking at.

Of course, companies file for and received patents all the time for technology that never sees the light of day. Back in April, Apple was granted patent approval for a platform that would automatically censor songs on iTunes or an iPhone. So far, that shows no signs of being implemented.