At its core, Bonnaroo is about cathartic collective experience via live music. So at the risk of sounding egotistical, I’m starting this piece on a personal note: This year marked my 10th consecutive Roo, a truly personal milestone considering I can count the things I’ve done that many years in a row without fail on one hand. The benchmark felt particularly significant given that Bonnaroo celebrated its 15th anniversary this year. But plenty of people have me beat: a fairly large throng of folks have returned to Manchester, TN for every single one, essentially giving birth to a localized subculture unlike any other in the U.S.

So what makes it worth the annual pilgrimage? It’s difficult to narrow down the reasons, but for starters, there’s no sound ordinance with its rural location – on “the Farm,” as we Bonnaroovians call it – which means that headliners can play special, lengthier than normal late-night sets, including the insanely stacked Superjams of lore. There’s also the communal magic of the campgrounds, which often feature plenty of planned and unplanned pop-up parties and shows, and sprawl about four times the size the Centeroo (main fest grounds). And in general, there’s the attraction of what the fest calls the Bonnaroovian Code, a list of suggested ethics that existed long before they were written down several years ago. Chief among them: Radiate Positivity. People walk through the iconic arch – this year outfitted with Dr. John’s feathered cap, whose album Desitively Bonnaroo is the fest’s namesake – and shed their egos, often without even realizing. It creates the closest thing we have to the spirit of Woodstock, with a contemporary utopian twist where the jocks and the hippies get along, where the young and old can play together without ever getting caught up in preconceived opinions. 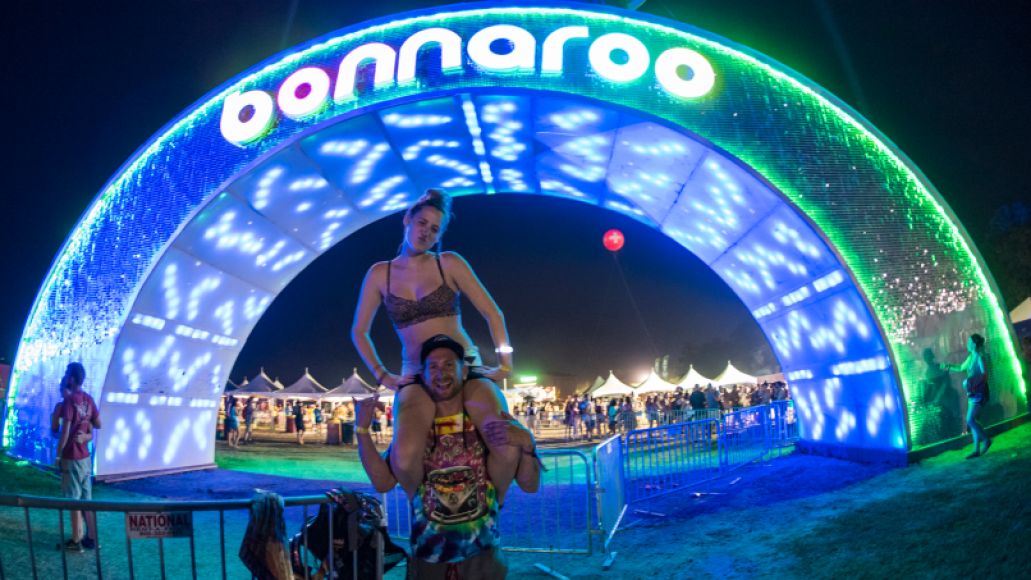 Despite those reliably recurring elements, ticket sales for this year were reported by fest organizers to be “slightly lower.” Sounds like no biggie, but some were speculating attendance between 40,000-50,000, which, if true, would be a massive decrease from the past few years’ typical 90,000. How could that be, one might wonder, with Roo’s reputation for proliferating transformative experiences? I mean, shiiit, that Pearl Jam set was for the history books, and there were some undeniably special bookings, including a confetti-splattered, late-night set from Tame Impala, another incredible dance party from LCD Soundsystem, and two back-to-back, two-hour, fest-closing sets from the Dead & Company, the new incarnation of the seminal group featuring the ever-gifted John Mayer. And don’t forget the undercard stocked with surefire stunners like Haim, recently reunited Ween, Band of Horses, J. Cole, Big Grams (Big Boi + Phantogram), and Blood Orange.

But under the microscope, the lower turnout isn’t surprising: There are only so many fiercely dedicated PJ fans that would (and probably did) dish out the cash for the weekend pass just to see their favorite band, and LCD Soundsystem – though seriously badass in this magical setting – is booked virtually everywhere this year, effectively killing their “get” factor. As for the Dead & Company, they attract a limited demographic – mostly of an older generation that may not be as willing to endure four days of camping in crushing heat, the threat of dangerous lightning storms (fortunately, Saturday’s brief evacuation proved to be a false alarm), and minimal sleep across 96-plus hours. Sure, the fest featured EDM titans like Griz, Flosstradamus, and Chainsmokers (which boasted a guest showing by budding pop star Halsey), but there was nothing like Deadmau5’s main stage headlining spectacle of last year to convince tens of thousands more millennials to buy in. Perhaps Macklemore’s presence could be argued a sufficient draw, but the lingering buzz of his “Thrift Shop” blow-up has long since waned. 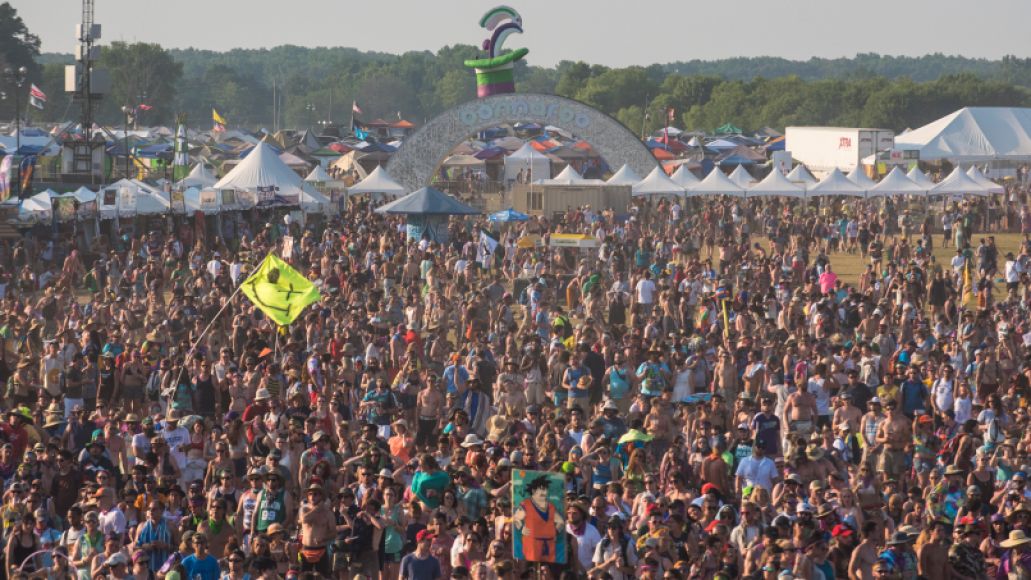 Yet, to say that the decreased attendance caused problems for the fest would be contrary to the long weekend’s overarching, unmistakably Bonnaroovian vibe. It makes sense if you think about it: a smaller gathering means more intimacy, which proliferates more connection and shared, music-induced euphoria between everyone involved. The average Bonnaroovian wouldn’t have even noticed the difference, however, because the fest’s footprint was tightened to fit the adjusted attendance.

Even though these details are important for the fest’s history books, they likely matter very little to anyone who was actually there. That’s because it’s extremely probable the majority of this year’s ticketbuyers were the types who would’ve splurged for the experience no matter what lineup was attached. We were fortunate this time around to be surrounded by tons of those super-dedicated music fans that form the bedrock of the fest’s unshakable subculture.

Anyone that’s worried about Bonnaroo fading away for ticket sales-related reasons is sliding down the slippery slope of Mt. Assumption. If anything keeps the fest alive, it will be the event’s unwaveringly dedicated organizers and this year’s core fan group, the true Disciples of Roo. 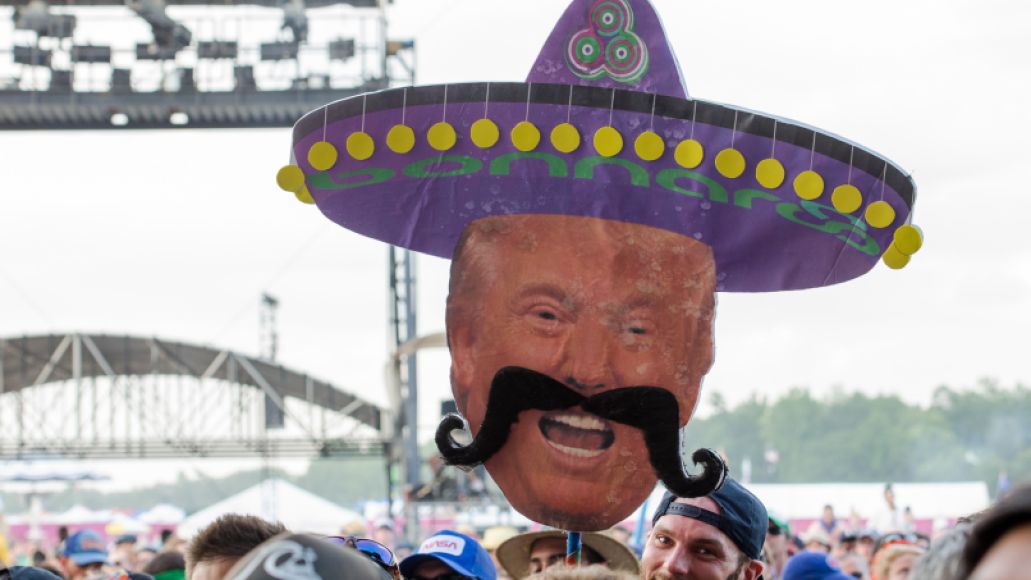 Eddie Vedder put it succinctly on Saturday night: “Bonnaroo was one of the first fests like this to take hold in the States. It’s not just the people who put it on, but the people that come here – you – who [create] the positivity it takes to take care of each other when it’s too hot, when lightning comes …”

Little did Vedder know just how meaningful his words were on this particular evening. As the band approached the conclusion of their exhilarating set, the deadliest mass shooting in United States history and worst terror attack since 9/11 was committed at a gay nightclub in Orlando, FL. The juxtaposition of events underscored just how important it is to promote a set of caring ethics like the one Bonnaroo upholds. The preservation of our humanity depends on it.

Inevitably, Bonnaroo will kick your ass – doesn’t matter if you’re working, just enjoying, staying in a hotel, or camping – we’re all-in, all together. With that attitude, there’s always a sunny side to any moment of adversity. It was these people and their optimistic outlooks that pulled Bonnaroo through one 15-year period – essentially a lifetime when you take stock of the fact that many of this year’s teen attendees were born on or around the same year as the fest. Idealism can be dangerous, but it’s also a fundamental facet of every great music festival. With that in mind, there’s every reason to believe that these same diehard Bonnaroovians will help propel the festival through another extraordinary epoch.

Click through to check out our reviews of this year’s notable artists, from worst to best, plus a massive exclusive photo gallery.