Mere hours after his untimely passing in April, Prince was honored with touching tributes, impromptu memorials, his very own rainbow above Paisley Park, and even a majestic, purple-hued Niagara Falls. Now, The High Priest of Pop is being remembered with his very own day.

As Billboard reports, Minnesota governor Mark Dayton has officially declared tomorrow, June 7th, “Prince Day”, to mark what would have been the late icon’s 58th birthday. The state’s residents are “encouraged to wear purple on Prince Day in honor of The Purple One’s enduring legacy,” according to the proclamation.

Dayton’s document also highlights a number of Prince’s many achievements. “Prince was considered a music industry innovator, a mentor, and a humble philanthropist,” adding, “he went on to create revolutionary music and an iconic identity.”

The governor also notes The Purple One’s specific gifts to his home state and beloved city, Minneapolis. He “was the creator of ‘The Minneapolis Sound,’ a contribution not only to the global catalogue of music genres, but to Minnesota’s worldwide prominence and its economic growth.” 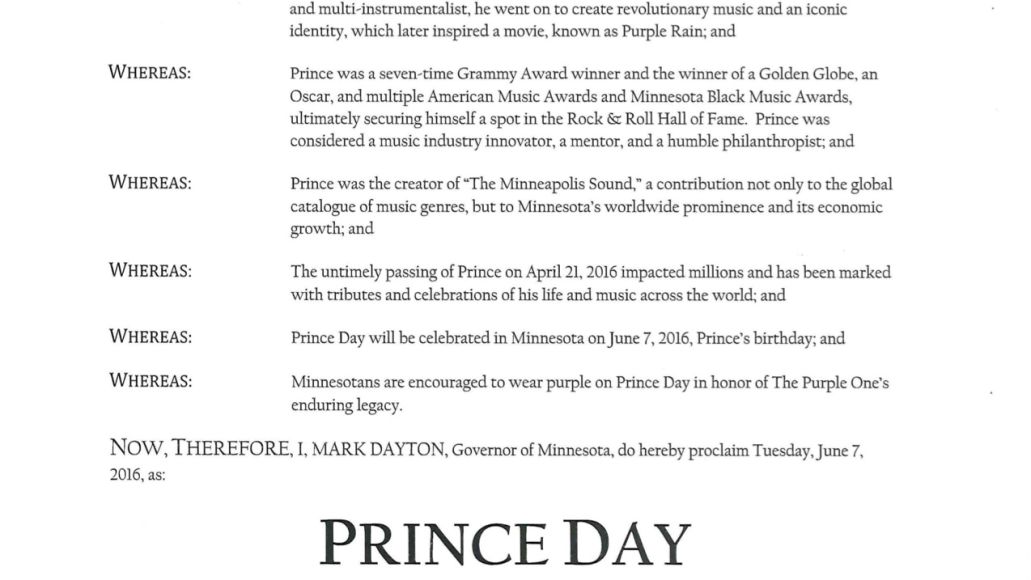 Below, revisit that time thousands of fans sang “Purple Rain” on the streets of Minneapolis.