I feel like a damn dad a lot of times,” Band of Horses frontman Ben Bridwell chuckles while he and drummer Creighton Barrett wait on a Hollywood rooftop for the taping of the band’s performance on The Late Late Show with James Corden. “You’re only as young as you feel … and I feel old.”

It seems almost ridiculous that the group’s beloved debut, Everything All the Time, is already a decade old itself. It’s been four years since they released their last record, the Glyn Johns-produced Mirage Rock, and in that time Bridwell and his wife have added two children to his family, growing the total to four young girls. All that time spent in a state of blissful domesticity has naturally led to a lot of growth and self-awareness. This shows on Band of Horses’ recently released fifth album, Why Are You OK, which retains their familiar grand scope but finds them breathing more deeply and shifting into a far more intimate, homey world.

The album’s lyrics accentuate Bridwell’s newfound sense of the world within his new world — a world spent at home. “It’s been a bit of time since we’ve had a full launch, and in that space and time we’ve had more kids, our families have grown, our bodies have aged,” he laughs. A big part of Why Are You OK’s renewed fervor comes from Bridwell’s writing process. Rather than isolate himself in a cabin in the woods — a classic bearded-indie-rocker rite of passage — he recorded in his converted garage during those precious hours when the kids were fast asleep or in school.

That process gave him time to explore, experiment, and learn to trust his gut. “There were times on this record where I could’ve settled for the safer route or even just got things done in a more timely manner,” he explains, but stretching out the writing and recording process helped. “Actually just every turn of the thing, whether that was choosing [Grandaddy’s] Jason Lytle to produce or even taking long breaks in between the sessions to make sure there was time to digest and reflect. I think that led to better work. I’m most proud that I didn’t back down from what I knew was the way to go.”

Like Bridwell, Barrett appreciated the decompressed process. “In this day and age, not only does everyone have their own fucking opinion, but it’s amplified a thousand times,” he sighs. “I really do feel that there’s been honesty in this music, and there always has been because of the way Ben writes it. I’m most proud that we’ve stuck to our guns and kinda said, ‘Fuck you’ and done things in our own way.” That raw honesty led to some of the most compelling moments on Why Are You OK, from the palpable annoyance of “Casual Party” to the nostalgic warmth of “In a Drawer”.

A big part of the digestion process came in cutting out clichés and digging for deeper truths. For Barrett, that meant working in nuances, going beyond the simple drumbeats that would easily suit the more intimate songs. Bridwell focused on reworking lines, avoiding banality, and finding the kernel of true emotion hidden in every song’s core. “I think I’m always going to be a purveyor of the cliché,” he admits. “I just have to have enough time. The digestion between sessions afforded me that wisdom that’s benefited only by time.”

Bridwell knows that he was able to take that time because of the faithful fan base Band of Horses have built over the decade. “We’ve been around long enough that it wasn’t like we need to stay in people’s minds and hit them, or we’re going to lose them,” he laughs. “I think we’re afforded a different luxury to a lot of newer bands because we’ve got a body of work to lean on.” 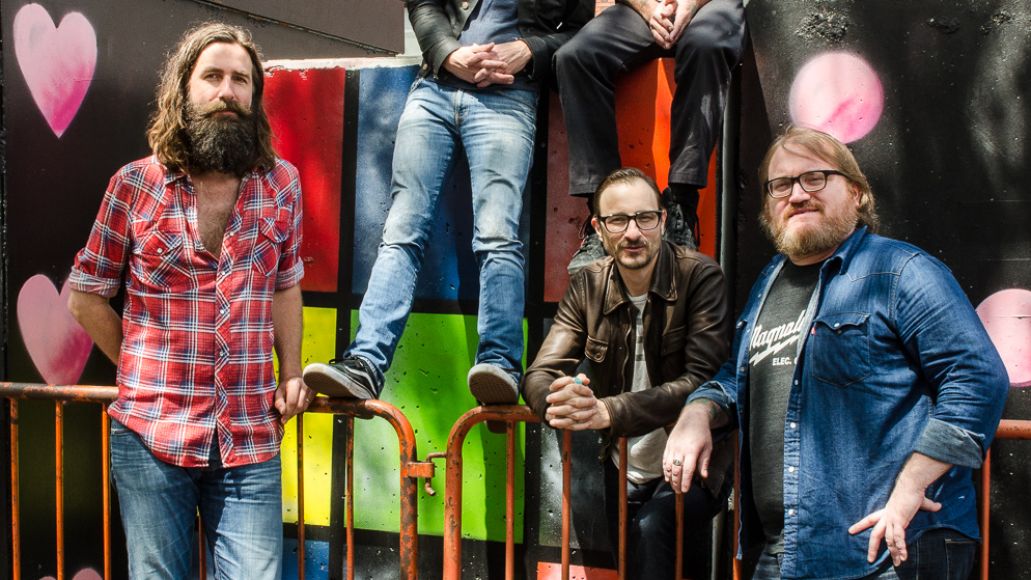 For a band concerned with exposing their truest self, the decision to team with prominent collaborators must have been difficult. The legendary Rick Rubin executive produced the record, Lytle produced, and Dinosaur Jr.’s J Mascis makes an appearance on one track. The group’s close friendship with Lytle meant that it took some getting used to working together in the studio. “Jason’s obviously a great producer, but he’s an incredible musician as well,” Barrett explains. “We’d have to make sure Jason wasn’t actually playing [every] part. Like, you’d come down and he’d already have your part before anyone’s even played on it.” Bridwell laughs before voicing his agreement. “It was kind of like tapping him on the shoulder at times, and being like, ‘Hey, do you think we could work on our record today too?’ But in a nice way.” Bridwell emphasizes the trust he and Lytle have developed and how those difficult conversations were another example of the dexterity that comes with age.

The Mascis collaboration came off just as smoothly. “Ben just had this song, which sounded like when Dinosaur covered ‘Just Like Heaven’ by The Cure,” Barrett explains. “He ended up naming it ‘In a Drawer’, because there’s also In a Jar, the Dinosaur Jr. record. Ben was like, ‘I’m gonna turn in my favor ticket with J since I sang on his solo record.’ Sure enough, J bit, and it was just like, ‘Hell yeah.’ And then the hilarity ensued.”

A big part of smoothing out the process, though, comes from keeping some of the bumps. “I’m such a terrible engineer recording my own demos that luckily they take a new life once the band or a proper producer gets a hold of them,” Bridwell says. This time around, he describes a conscious effort to hold onto “some of those garbage elements that only I can conjure up in my basement. It’s important not to let that get over-sanitized from farm to table, as it were.”

Despite Lytle’s huge influence on the recording process, Band of Horses know that they have a core identity that couldn’t be squashed. “I think we have our sound, so every record is going to have songs that are similar to it,” Barrett says. “If you try to throw that off and overthink, that’s when you get a shitty song. The heart of our songs shows itself pretty quickly.” As a result, Why Are You OK doesn’t feel like a massive shift emotionally, even if it features major moves sonically.

Though the band poured a lot of hard work into the new album, there’s a preternatural ease to tracks like the superb and revealing “Barrel House”. The song’s inspiration is a sweet story, based around the converted water tower in which Bridwell and Lytle first met to discuss working together. “He stayed with me a couple nights there and then had to go home, and I spent two more nights by myself,” Bridwell recalls. “It was one of those things where I sat down, it was probably around noon, and by the time the sun went down, I was like, ‘I got a damn song here.’ That seems like a long time, but sometimes it takes me years to get a damn song. I just got lucky with that one.” The rest of the record comprises material mined from various points in the past eight years, but the band has put in the work to make it all sound like a unified whole. “We find something in the songs that we keep coming back to, and they keep coming back to us for a reason,” Barrett explains. “Maybe if it was a good song, it would have already been written, but we don’t let it lie like that, [instead] poking it in a cage, you know, until it’s ready to bite.”

Some theorists and music lovers argue that all songs are either about falling in love, falling out of love, or being frustrated with love. Whether consciously or not, songwriters are always returning to those vaults to find inspiration. “I could not agree more,” Bridwell says after a few moments of thought. “Hook, line, and sinker, we go straight for those three.” But that’s only part of the story. Now that he’s been married longer, had more kids, and developed more of a domestic life, the love changes, the anger changes, and the stakes of conflict change. “I think a lot of being able to have difficult conversations and trust your instincts comes from being married long enough to know that it’s okay to have a conversation,” Bridwell says. “I don’t see myself going the crazy diva route at this point in my life. I’m just more grateful for everything, whether it’s a song that comes easily or the fact that 600 pieces of things need to be signed.”

Running with Gut Feelings: How Band of Horses Keep Moving