In 2005, Garbage were a bloody mess. The alt rock outfit had built a legacy over years of successful albums and touring, but when they looked around, they saw a world they no longer fit into. “We all realized that we were in this incredible position of being in an internationally successful rock band, and we were all miserable as sin,” explains frontwoman Shirley Manson. “There were millions of people wanting to do what we did, and I didn’t want to carry on with a really bad attitude and a broken heart.”

So the band went on hiatus, a move that helped to ease tension but also bred its share of worry. “I had two years of doing absolutely nothing, and I lost my fucking mind,” Manson admits in a perfectly punctuated Scottish drawl. Perhaps to keep their sanity, Garbage returned in 2012 with Not Your Kind of People, which the band released on their own Stunvolume record label. That album revived their confidence, especially when it came to the loyalty of their considerable fanbase. It also functioned as a springboard for the much stronger Strange Little Birds.

Returning to the scene required finding that fire again, something that the Los Angeles-based quartet did in part by deciding to release records on their own and without the involvement of major labels. “We wanted to take control of our own destiny, our own lives,” notes multi-instrumentalist and producer Butch Vig.

Now, two decades removed from their classic, self-titled debut, Garbage feel as passionate as they did at the start. “I keep thinking I’m going to mature and grow up and be a little more cool and calm about things, but it’s really thrilling,” says Manson. That sense of excitement translates to the songs, a beautiful mixture of the band’s classic, glossy alt rock and a newfound ferocity. Astonishingly, Manson’s vocal range has only gotten wider, a fact revealed in the raw strength of tracks like “Magnetized” and the emotional frailty of others like “Empty”.

Their songwriting has also benefited from that freedom. Some talk about songwriting like it’s a kind of labor, while others claim it seems more muse-made, more fluid, more spontaneous. Manson has lately favored the latter. “I wanted to explore some of the places in my past that have been difficult to process and let go,” she explains. “When I sat back and looked at all the songs we had chosen, the record is actually about forgiveness, forgiving oneself and questioning the idea of why is it that, as human beings, we are very loathe to truly forgive.” That manifests particularly well on the excellent “If I Lost You”, in which she admits insecurities about a partner leaving and her own struggles to forgive. “My lovers have fucked around with other women and all these things that happen to everyone, but I was unable to speak about it on record, and I wanted to explore why.”

That explanation wasn’t an easy one to come by, and it required a close examination of the band’s past. Manson had always assumed they would be a flash in the pan; she describes their career in language that hints at an imposter complex, sure that anyone could do what they did. But simply by surviving for more than two decades as a band, Garbage have achieved something special, even if Manson still has a self-deprecating streak. “I feel way more excited at this point, even though I’m no longer young, and no longer as beautiful as when I was a kid,” she says. “To me, it doesn’t matter. I feel better and now get so much more out of my career.”

For decades, fans have been drawn to that emotional sincerity like moths to a raging flame. Vig himself sees its power every day, particularly through Manson’s online presence. “I think our fans really love how much Shirley tweets and writes on Facebook,” he explains. “Garbage fans have really come to expect Shirley to express her mind freely. She’ll admit she’s a hot mess, and I think that’s one of the reasons why we have such hardcore fans.”

Though they’ve had their fair share of mess — interpersonal tumult and torment from record labels — Vig insists that the music itself has always been the driving force. Every day is spent in the basement recording studio at his Los Angeles home, producing, making, or listening to music. “I should probably find a hobby,” he jokes. 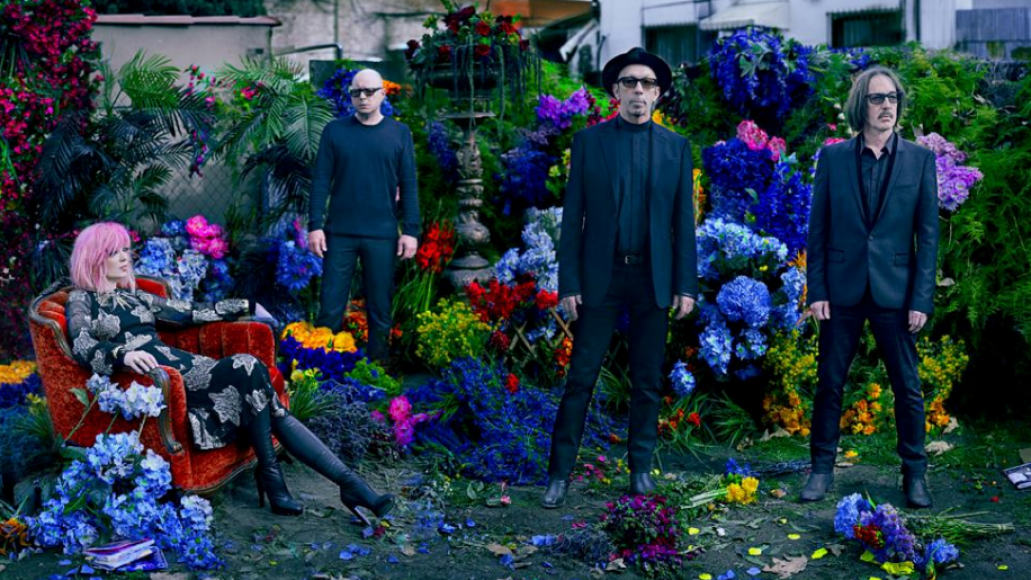 Vig’s extraordinarily star-studded production catalog buzzes with life, and he gives credit to each band on that roster for teaching him something he could in turn take to Garbage. When working with Foo Fighters on 2011’s Wasting Light, he learned to work on tape, to let the moment breathe rather than being too precious about it. “You need to connect to a song emotionally,” he insists. “It doesn’t matter if a take is perfect. That’s part of being a musician. You’re showing that you’re human and not a perfect machine.”

There’s a familiar gloss to a good deal of Strange Little Birds — a core sound that will be familiar to die-hard fans — but Vig aimed to give the record a more cinematic feel, to shake free from the standard rock and roll tropes. That aesthetic fits particularly well with Manson’s dark, defiant lyrics, which sound as if she’s working out her pain in real time.

If Garbage’s palette has widely shifted, the singer’s ferocious sense of self hasn’t. A main point of contention for her is the treatment of women in the industry, and she makes it a goal to nip poisonous, ignorant misogyny in the bud. “If I encounter sexism of any sort, or I sense that a man is attempting to dominate me, I will fucking castrate them verbally,” she practically roars. While that doesn’t always enter into her writing, the irrepressible confidence and refusal to break does. “I’m really aggressive, and I’m really articulate,” she adds. “I see how it impacts others, and that’s what makes me crazy, so I will be a warrior for those who are not as able as I am to function in a patriarchal system.”

Manson isn’t the only one who had to mine her way through personal vexations. The Vig-penned song “Even Though Our Love Is Doomed” fills the space with the same gusto, exploiting and deconstructing basic human fears. “When I was writing it, I was feeling quite fragile,” he says. “How do you deal with yourself, your relationships with your family and your band whilst the world is going crazy? You have to fight for things that mean something to you, even if it’s a relationship that feels dysfunctional. If it’s important, you have to work your way through it and try to save it somehow.” Manson delivered all of that intensity in a single take, resulting in one of the strongest tracks on the album.

Though they’re legends of the alt rock radio scene and have come to a point of maturity and confidence, it’s not all silver linings and greeting card sentiments for Garbage. “I can [still] be a complete asshole,” Manson confirms with a laugh. “Just ask my family.” But today, something about going onstage unlocks that part of the band that gives them the ability to overcome those negative emotions. “I feel like I’m lost in my bedroom listening to records,” she says. “In my real life, I’m quite inhibited, but when I step onstage I feel at home, and all of a sudden the spotlight is off me and I can be myself without being judged.”

In 2016, Garbage are a bloody triumph. When anxiety guzzles the fun out of recording and performing, Manson gets over it by going through it. “I’m like a tiger that chews its tail. I’m at my most destructive when I’ve got nothing to do. I’m at my best self when I’m busy.” It’s a good thing she’s finally found a world she fits into. “We’ve only finally gotten here after a long time,” she laughs. “We were old when we emerged, and it’s taken us a long time to figure this out.”

The Restoration of Garbage