In just the last 48 hours, two black men have died at the hands of police officers. 37-year-old Alton Sterling was fatally shot during an arrest while pinned down to the ground in Baton Rouge early Tuesday; yesterday, 32-year-old Philando Castile was shot in a St. Paul, Minnesota suburb as he tried to reach for his ID in his wallet, the video of which has since gone viral.

Though it’s uncertain whether federal investigators will look into both incidents, it is clear minority communities nationwide are angry, scared, and hurting over what’s transpired, exhausted by how commonplace such racially-charged, officer-involved deaths have become in this country. Celebrities have also voiced their concerns, including Drake, Spike Lee, and Rihanna, who all weighed in on the Sterling shooting yesterday.

Now, Beyoncé has spoken up in the form of a message on her website, written in all caps. Titled “Freedom” — which shares its name with her fiery Kendrick Lamar-featuring Lemonade track — it sees the pop singer issuing something of an urgent call to arms to stop such violence.

“We are sick and tired of the killings of young men and women in our communities,” she begins. “It is up to us to take a stand and demand that they ‘stop killing us.’ We don’t need sympathy. We need everyone to respect our lives.”

“This is a human fight. No matter your race, gender or sexual orientation. This is a fight for anyone who feels marginalized, who is struggling for freedom and human rights.”

“Fear is not an excuse. Hate will not win,” she goes on, before encouraging readers to enact change by contacting their local politicians and legislators.

Read her message in full. 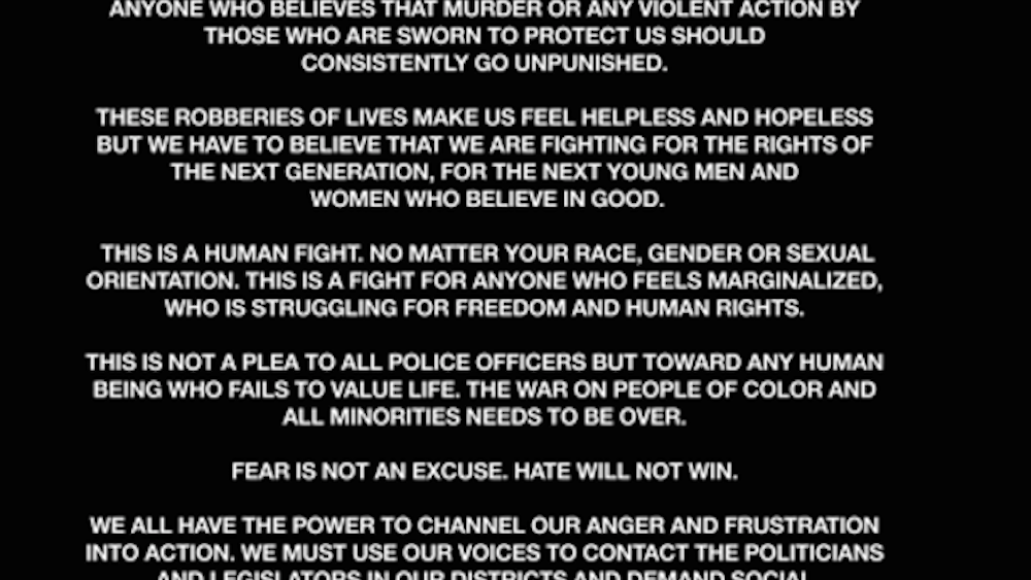 Update: During a concert in Glasgow tonight, Beyoncé held a moment of silence in remembrance of the many victims of police brutality. Shortly after, the Lemonade singer then projected a list of their names, including Sterling, Castile, Eric Garner, Sandra Bland, and Tamir E. Rice, while singing “Freedom” a cappella. Find video of her performance and more footage and pics below.

Earlier today, Chance the Rapper also addressed Castile’s death through a series of tweets. In one of them, he asked, “These guys murdered this man with a 4 year old daughter in the backseat? Is there any situation where police get arrested? Or convicted?”

These guys murdered this man with his 4 year old daughter in the backseat? Is there any situation where police get arrested? Or convicted?

If you're a Judge, or a politician or a fellow officer with a Conscience, what does it tell you to do? As a human being what do you feel?

As a man, you can always do/say something. https://t.co/5mcfXCLSG4

???? 1) Africa isn't a country 2) I'm an American citizen 3) My ancestors built this country and I'm restructuring it. https://t.co/yXjMhEoZ2T