Believe it or not, it wasn’t Taylor Swift’s icy platinum hair or Loki love that set off her recent metamorphosis from charming girl next door into fire-breathing, diabolical pop diva. On Wednesday, a representative for Swift confirmed that she co-wrote ex-boyfriend Calvin Harris’ latest Rihanna-featuring smash, “This Is What You Came For”, under the pseudonym Nils Sjoberg. Some Swifties had already suspected this, but to Harris and many others, the Sjoberg reveal amounted to kicking a poor guy while he’s down (ignoring the fact that the “poor guy” in this scenario is an immensely successful super-producer). Swift had already broken up with Harris and jumped straight into a much-publicized relationship with Tom Hiddleston; did she really need to stomp on her ex’s career as well as his heart? Perhaps Harris said it best:

If you venture over to the #TaylorSwiftIsOverParty hashtag, which has been trending on Twitter since TMZ first broke the story, you’ll find countless gifs of Katy ETC-type celebrities Swift has beefed with in the past, all of which paint Swift in a negative light. Longtime detractors had been waiting for public opinion to turn against the pop star, and now they seemingly can’t wait to celebrate her demise.

But before we get carried away, let’s be clear: This is not the end of Taylor Swift. Not even close. Nor is it a clumsy leak that clashes with anything we’ve come to know about her well-calibrated brand of populist feminism.

Swift’s rocky post-honeymoon phase recalls that of another beloved celebrity: Golden State Warriors point guard Stephen Curry. During the NBA Finals in June, Curry transitioned from an unsinkable vessel of boyish charm into Public Enemy No. 1 just because he got heated and chucked his mouthguard at a nearby fan. Of course, this transition didn’t happen all at once; throughout the postseason, the Warriors gradually shed their scrappy, under-appreciated identity and embraced outright supervillain-y. Before the infamous throw in the final minutes of Game 6, the Warriors had already been punting their adversaries in the groin and celebrating before the ball passed through the rim. However, we’d been too busy marveling at all the three-pointers to really notice. Curry and the Warriors had been getting used to their superpower status all season, but during the Finals it seemed clear that this player and this team expected success in a way that was too arrogant to adore.

In this respect, Swift and Curry might be the only two people in the world who can actually relate to one another. Whereas Curry’s descent into villainy was fast and furious, Swift has undergone a methodical transformation from someone to be pitied into someone to be feared. She used to yearn for love from the bleachers; now she has a bazooka-outfitted squad to dispatch the haters. “Dear John”, Swift’s not-so-subtle hatchet job on John Mayer, established her as a shrewd romantic with a repeatable formula (short-term love, followed by breakup song, followed by new short-term love). The Harris fallout broke from formula, and that’s likely what threw him (and us) for a loop.

I don’t know how Swift plans to address the Nils Sjoberg situation moving forward. She could simply ignore it, or she could return with a Calvin Harris diss track on a grunge-indebted new album called 1991. Either way, it’s easy to see how this move is of a piece with her Grammy speech from earlier this year. Most of the conversation surrounding her Album of the Year acceptance speech related directly to Kanye West’s infamous “Famous” verse, which she may or may not have ghostwritten, too.

If we took Kanye out of the equation and Swift delivered the same speech today, its meaning would likely retain its resonance in a new context: “I want to say to the young women out there, there are going to be people along the way who try to undercut your success or take credit for your accomplishments or your fame. But if you just focus on the work and you don’t let those people sidetrack you, someday when you get where you are going, you’ll look around and you will know that it was you and the people who love you who put you there and that will be the greatest feeling in the world.”

Perhaps Swift wasn’t really trying to undercut her ex-boyfriend — a perennial festival headliner who gets feature credit for most of his major work — as he claims she was. TMZ’s original source suggested that Swift and Harris agreed to keep the collaboration a secret so the narrative of them recording as a couple wouldn’t overshadow the song. Now that they’re no more, why shy away from transparency? It’s not a stretch to imagine this gesture as Swift’s way of ceding the spotlight to her then-boyfriend, and now she wants to lay claim to her work in an industry that downplays the contributions of even its biggest female stars (think of every meme that compared Beyoncé’s songwriters to Beck’s Morning Phase after the 2015 Grammys). 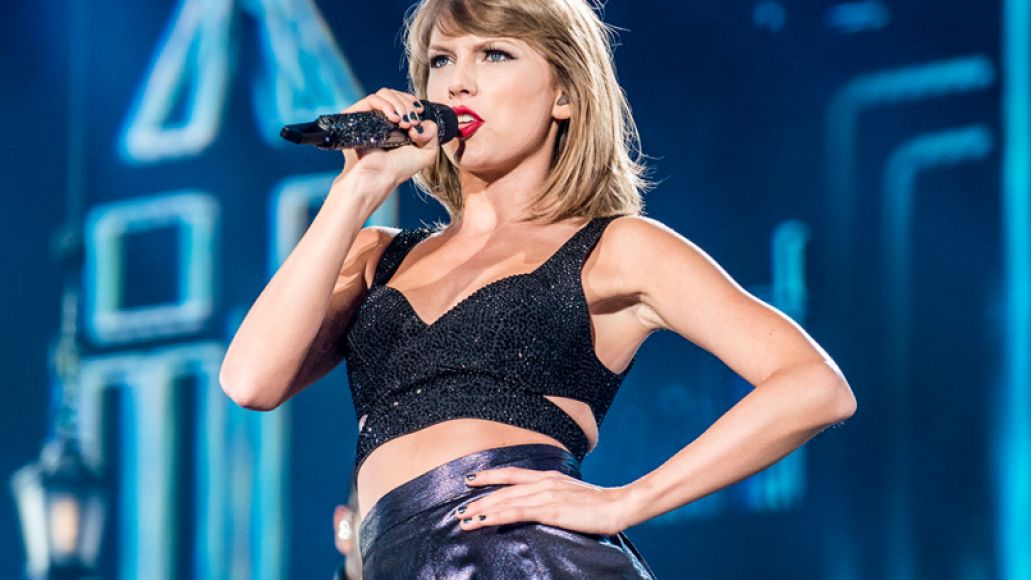 In a sense, Harris has successfully out-Swifted Taylor with his indignant Twitter rant. Somehow, an EDM superstar has become a sympathetic figure and Trojan Horse for outrage by simply providing a window to his heartbreak. The Taylor Swift of 2008 might have traded in this sort of self-pity, but she’s since mastered the most public brand of post-breakup catharsis.

Unlike with exes Mayer, Harry Styles, or Jake Gyllenhaal, the online police seemed to take issue this time because Harris conveyed a sense of being genuinely hurt. Swift’s romantic habits haven’t changed much over the years, but we weren’t used to this sort of reaction from someone on the other end. Much of the #TaylorSwiftIsOver camp seemed ready to pounce and weren’t so much reacting to this latest news but furthering more of a cumulative indictment of Swift.

Outrage culture has a way of magnifying a small, reactionary contingent of voices in response to something they deem has lost its charm or crossed a moral line. With Swift, as was the case with other “unsinkable” A-listers like Jennifer Lawrence and Anne Hathaway, the glare is even harsher. When you peruse the hashtag party, you find many detractors tweeting something to the effect of, “I’ve been saying this for years, and now you all see.” These people weren’t diehards who felt let down by a new development; they’d been sharpening their pitchforks for years, waiting for the groundswell of public opinion to back them up.

If we’ve learned anything about Swift up to this point, kissing off the Internet noise and assuming a more fearsome identity shouldn’t prove to be much of a challenge. Even if it further muddles our notion of who’s the “real” Taylor Swift, she could stand to learn some tricks from her greatest arch rival. Kanye’s relished his role as a villain without compromising an ounce of his cultural significance, and while we might not agree with his every move, paying attention is all but required. Given Swift’s impressive sense of control, we’ll keep tuning in, even if she fully abandons the underdog exoskeleton we fell in love with.