Stephen King fans, we’re there. After a long slog of would-be adaptations, most of which fell through the cracks (at least, those not helmed by Frank Darabont), this year has been nothing short of awesome for longtime readers and film buffs.

Hulu’s 11.22.63 arrived this past Winter, proving that, yes, you can adapt one of his larger works to precision. Andrés Muschietti’s two-part adaptation of It looks like it’s saving face after losing Cary Fukunaga. And, finally, The Dark Tower draws near.

So close that we’ve had our first looks at Idris Elba and Matthew McConaughey as Roland Deschain and The Man in Black, respectively, and even received confirmation of a startling revelation that changes the way we see the series altogether.

Today, the madness around Nikolaj Arcel’s highly anticipated adaptation continues as Entertainment Weekly, apparently the go-to dump for all King-related exclusives, returns with set reports, photos, and interviews with Elba and McConaughey.

What they discovered is that the film will weave through King’s novels rather than constricting the action solely to the first book, The Gunslinger. As such, we’ll be seeing places like the Dixie Pig, the way station between Mid-World and New York City, where the incorrigible, human-like demons called the Taheen lounge about. 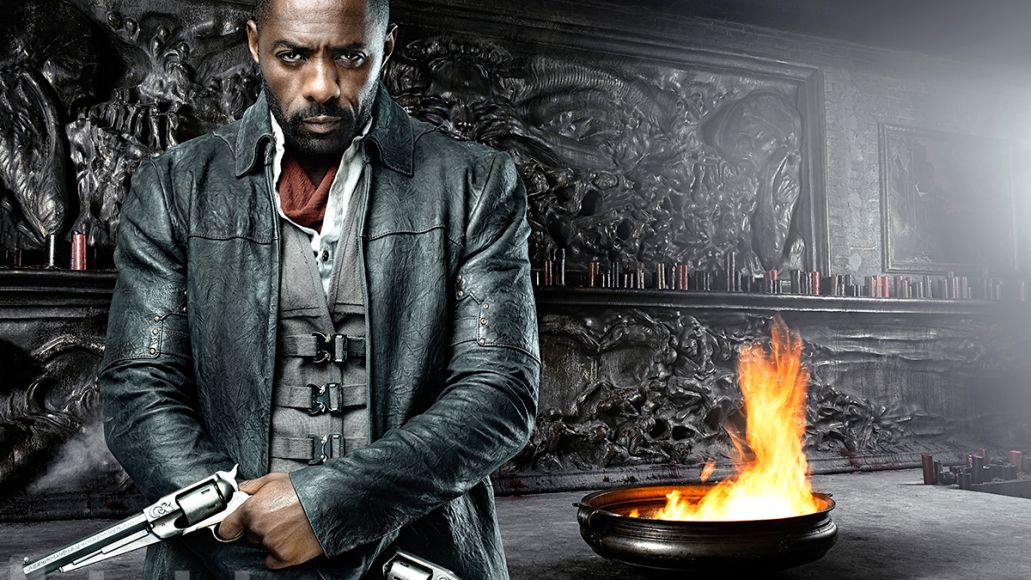 Elba also had lots to discuss about Roland, from what drives his character to more obvious questions about race.

“When we meet Roland he’s a bit lost,” he admits. “He’s been walking around for a long time, so he definitely feels like a man who’s… coiled.” He contends that Roland has lost his sense of purpose as a protector, and how that all changes when he meets Tom Taylor’s Jake Chambers, who has the ability to “shine”, much like Danny Torrance of The Shining. “Until he meets Jake, he doesn’t have anything to believe in, really,” Elba adds. “He’s really pent up and releases his soul through [defending] the boy.”

The 43-year-old actor digressed on the casting, insisting he was “thrilled to get this job,” though namely how it could divert from the book’s initial description. “You could make a version of this film that appealed to a slightly more action-hero type character and I don’t do those films,” Elba explains. “I like to bring a little depth and bring a real character. And what’s been fun is, Nik’s really up for that. So we do takes that are a little bit more commercial, if you like, and we do takes that are fucking deep, like we’re making an independent film. It’s an iconic character. I want to get it right.”

When it comes to race, Elba feels “it’s better just to treat it like no big deal” and that “there should be no difference.” He expands upon this, saying: “The character that was written in Stephen’s imagination, it could be any color. It just happens to be me and, you know? In the artwork, it just so happens to be a white guy, but I don’t think that makes any difference. I think what’s great about it, if I want to say anything about it, is that it is a sign of the times in terms of a colorless society. People go, ‘A good actor is a good actor,’ you know?”

And this great actor knows a thing or two about Roland, as he perfectly summarized the rogue knight: “There’s a mystical element to him. He’s about 200 years old. He’s been around for a long time, and has a deep-rooted connection with the [supernatural] nature of the film. Roland’s completely tuned into that. When you meet him, he’s very much a stoic man, doesn’t want to talk. But when you get to know him, he really knows quite a bit about the world and his world’s history.” 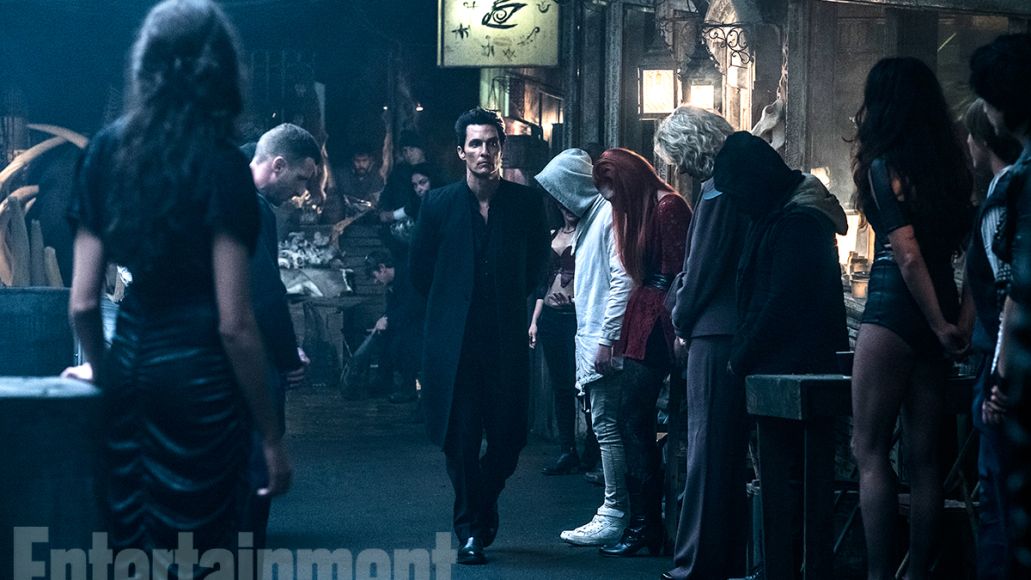 The same could be said of The Man in Black. McConaughey, too, has a strong grip on the character. In his interview with the publication, the 46-year-old actor cites Black Sabbath as his own mantra (“Follow me now/ and you will not regret/ leaving the life you led/ before we met”) and insists while “he’s not literally the Devil,” he “sure as hell think(s) about him like the Devil.”

And while Roland despises his villainous foe, the feeling isn’t mutual: “I revere him,” McConaughey explains. “He’s really the only true adversary I have. I expose hypocrisies, and he’s the closest to pure there is. It’s his persistent, resilience to be good and altruistic. He’s very precious to me. I almost don’t want to see him go.

“So many times I’m just pumping him up, through sorcery, almost like the man in the corner of the ring for a boxer,” he adds: “’Come on, you can do this, stay in the game,’ because I want to keep him, I want to keep his vengeance to find me. I want to keep that very vital, you know? My want, my need, my mission is to bring down the Tower. My love, my adoration, my muse, my shadow, is Roland.”

That game of cat and mouse should prove amusing on screen, but it’s The Man in Black’s chase after Jake that will bring all sorts of tension. McConaughey sheds light on the fact that the film will also include the Devar-toi, a commune of sorts where psychics are held captive, and that’s where he needs to bring Jake to take down The Dark Tower. Or as he says, “Let’s go sing and dance and do some detective work and find the boy with The Shine and bring him back and use him!” 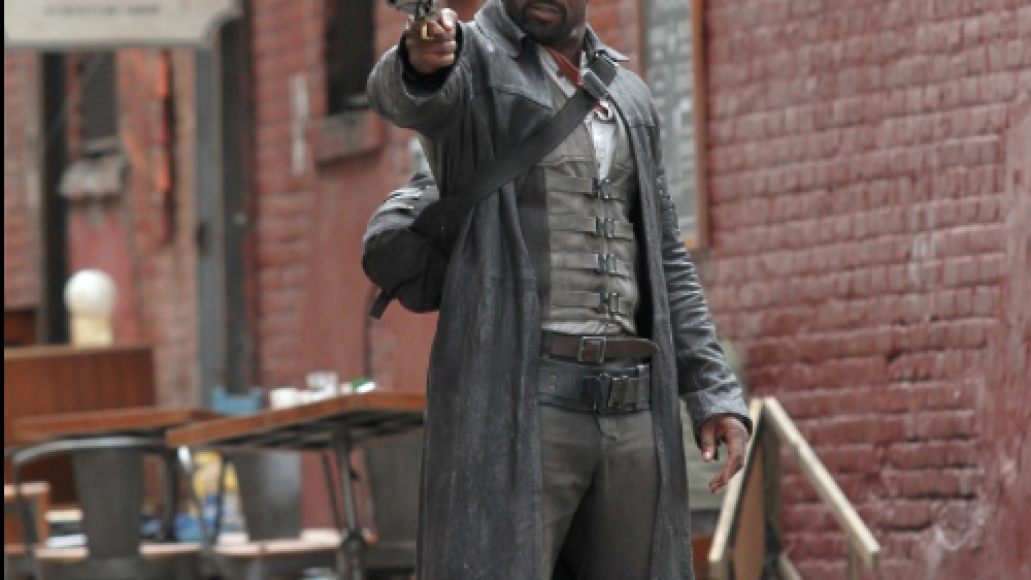 So far, so good. Diehard fans should also find solace in seeing some of the hidden references. For instance, The Crimson King’s talisman can be seen next to McConaughey in the photo above and there’s even a reference to King’s classic novel, Salem’s Lot, in a newly surfaced set photo (also above). Considering how so much of the series is awash in callbacks, not just to King’s work but pop culture in general, it’s nice to know the film looks to be following suit.

But what about the changes? Although the publication’s kept mum about details, they can confirm that Eddie Dean and Odetta “Susannah” Holmes haven’t been cast yet and won’t be appearing in the film. (Which means earlier reports that Aaron Paul was circling the role of Eddie may have been premature or saved for sequels.) King gives the thumbs up on the altercation, though, coyly suggesting: “I know exactly where Akiva always planned to bring them in and that’s cool with me.”

Ever a mystery with The Dark Tower, and the journey begins February 17th, 2017.