Rage Against the Machine and Prophets of Rage guitarist Tom Morello recently quoted Martin Luther King, Jr. in an interview with Bloomberg Politics, remarking, “There’s no hotter place in hell than for people who remain neutral in times of moral conflict.”

The United States is currently in a time of moral conflict. In the months since Morello’s Prophets of Rage formed, the gaps that divide America have only widened. In the wake of the police shootings of Alton Sterling and Philando Castile, and the massacre of five Dallas police officers during a Black Lives Matter protest, America needs a supergroup like Prophets of Rage more than ever. The intense political race between presumptive nominees Donald Trump and Hillary Clinton is likely to shape the country for years to come, and the band is urging people to get the hell off the sidelines.

Morello, along with fellow Rage Against the Machine alums Tim Commerford and Brad Wilk, Public Enemy’s Chuck D and DJ Lord, and Cypress Hill’s B-Real, have ignited a wave of politically charged support with their “Make America Rage Again” rallying cry, and that cry is about to get louder. On July 19th, the day of the Republican National Convention in Cleveland, Prophets of Rage will descend on the city to kick off a 35-date national tour. The group’s decision to begin the tour that day was no accident; think back to Rage Against the Machine’s raucous appearance at the 2000 Democratic National Convention for a primer on how they might crash this party.

“From the mind of Tom Morello, who I strongly agree with, I think this was a thing that is rooted in the Rage Against the Machine tradition,” reflects Chuck D. “We want to be able to take protest culture and put it into some kind of consciousness. What better place to be, and what better time than now?”

This, of course, is nothing new for Rage Against the Machine. Eight years after invading the DNC in Los Angeles, the group attempted to stage a concert at the 2008 Republican National Convention in St. Paul, sparking protests and scuffles with riot police.

“Our history with Rage and playing conventions has been full of incredible moments,” Commerford says. “Whether it’s a full-scale riot where the police are shooting the fans with riot guns on horseback, or surrounding the stage we’re supposed to be playing on. Whether it’s telling us that we aren’t allowed to play our music in the free country we’re living in, or instigating a shutdown of every street within a five-mile radius of the venue we’re playing at, with the only thing resembling an automobile around us being a police tank sent to ‘protect’ people from our music. 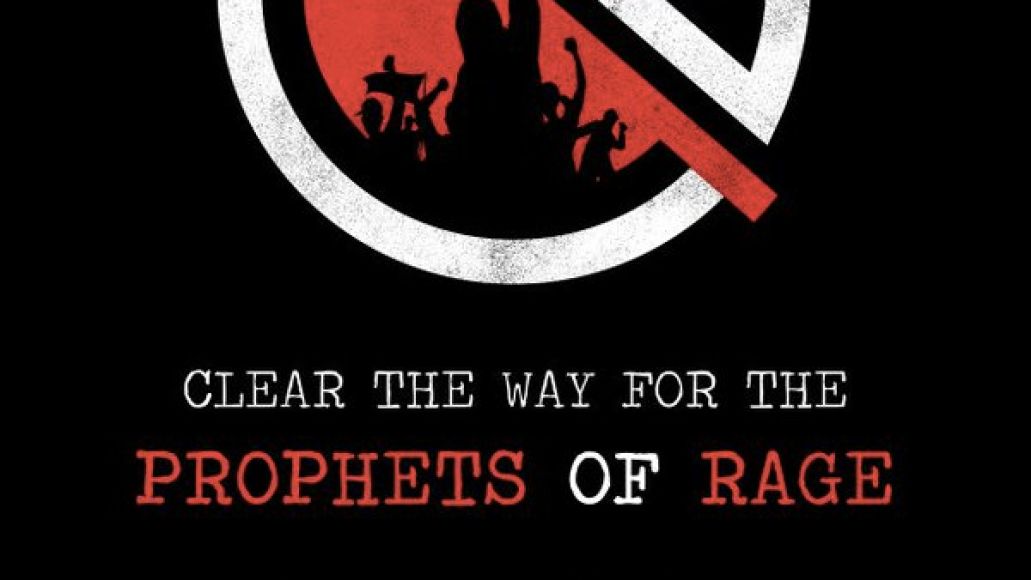 Over 50,000 people are expected to attend the RNC, but most of them probably aren’t anticipating five loud, angry musicians showing up to influence and educate the public. The last time Chuck D attended the RNC was in 1996, when noted segregationist Strom Thurmond tricked him into taking a photo with him.

“Thurmond gave me a politician grip I couldn’t get out of,” he remembers. “He used this old-school technique of grabbing your arm, shaking your hand, and smiling. So even if you came at him from an adversary point of view, he already switched it like you were friends. I consider myself not exactly a weakling, so I tried to pull my hand out after the initial shake, and I could not lose his hand. He had the vice grip on me like you wouldn’t believe. He was like a pit bull on a snake. I don’t even think Trump has that trick.” Just in case he does, the rapper is coming with a foolproof escape plan: “I’ll just make sure to put Vaseline on.”

(Read: A Brief History of Punk Rock and Presidential Politics)

In the eyes of Chuck D and Prophets of Rage, Trump and Clinton have pulled the wool over Americans’ eyes. On one hand, there’s a racist egomaniac; on the other, a woman enveloped in a storm of controversy surrounding her questionable level of honesty. “Trump-Hill,” as Chuck D calls them, haven’t fooled Prophets of Rage, and they’re intent on delivering the truth behind the antiquated two-party system as loudly as possible.

“I think politics will follow us everywhere we go,” Chuck D admits. “The Jackass and the Elephant are going to try to do whatever they can to find votes, and we want to educate those voters. You have to be aware of the times you’re in. Don’t be a puppet, and don’t be shallow about what’s going on. That’s the bottom line. We’re raging against it.”

“We have a really fucked-up system,” Commerford agrees. “The electoral college is something I’ve never understood. It doesn’t make any sense to me and seems like a way to prevent America from getting the person they really want to be president. At the end of the day, you have these swing states that are ultimately going to decide who’s going to be president. I just think it’s fucked up. It needs to be smashed, and I love trying to use music to do that.” 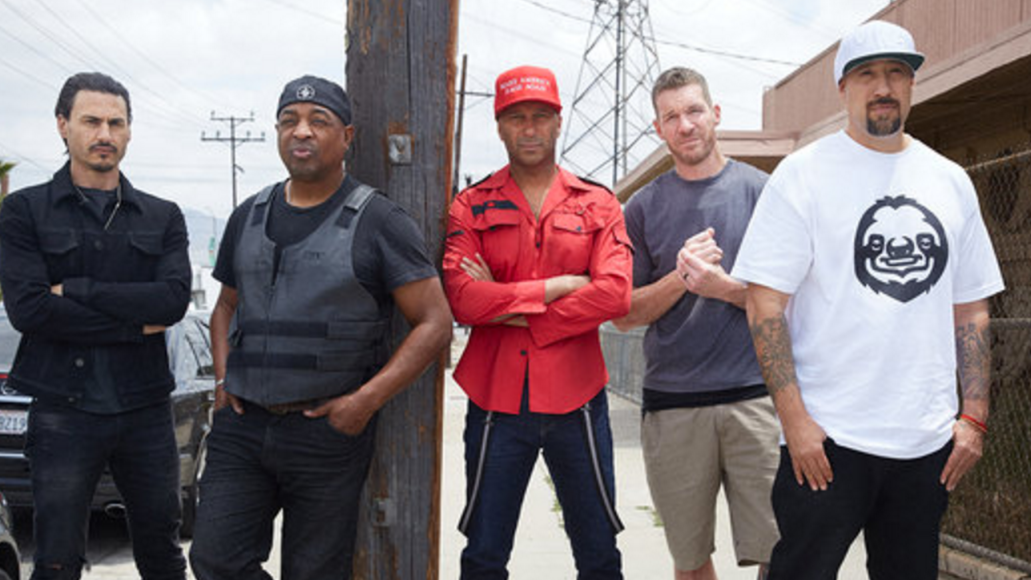 Ohio, which has always been one of those all-important swing states, is already bracing itself for chaos. Security has been ramped up in the downtown Cleveland area, and metal barriers line the streets. Police officers have been patrolling inside all-terrain vehicles while military helicopters hover in restricted airspace downtown.

In what could be the most divisive election in history, Chuck D doesn’t plan on supporting either candidate. Commerford has a unique take on voting that doesn’t sound too far-fetched. “I know people don’t like to hear this, but I believe in voting on the city level,” he says. “I do not believe in voting for a president. You have to have millions of dollars to run, and you get those millions of dollars from the same corrupt corporations, then you owe them favors. It doesn’t matter if you’re George Bush, Barack Obama, Hillary Clinton, or Donald Trump. You can go around saying, ‘I’m going to pull the troops out of Afghanistan, and I’m going to shut down Guantanamo Bay, I’m going to build a wall,’ but at the end of the day, you’re going to do what those corporations are paying you to do.”

(Read: Why Prophets of Rage Are the Protest Band We Need in 2016)

“But I liked what Killer Mike was doing when he was working with Bernie Sanders,” Chuck D adds. “I think he’s great. The concession to Hillary hurts, but also we knew the limited two-party game in the US makes it a game of numbers. Unfortunately, it’s a game of math — if you don’t vote for one, then the asshole gets it.”

Prophets of Rage will be performing at the Agora Theatre and Ballroom in midtown Cleveland, a mere two miles away from the RNC’s base at Quicken Loans Arena. Most likely, it won’t be the only place the group will pop up that day. They already have a staunch reputation for surprising people with random appearances, most recently on a rooftop above LA’s Skid Row.

Impassioned protests are expected, but Chuck D believes there has to be a new way to fight the system, a way that doesn’t rely solely on protesting.

“There needs to be movements that are united with protests,” he says. “If black lives matter, let’s go another step — choose the fight of joblessness, homelessness, hypocrisy, and educational reform instead of fighting bigotry and fatality all the time. Black Lives Matter is a great thing to do, but you have to make a united collective movement. Black Lives Matter isn’t just doing black things — it’s never meant that. It’s always meant to bring a group of disenfranchised people up a notch instead of being pushed down.” For him, racism changes in complexities. “It changes its uniform every decade. You can’t fight racism the same way you fought it in 1953,” he adds.

As Prophets of Rage continue to put politicians on blast and advocate for change, their music is their call to action.

“The basic idea is to stay loud, stay vocal, stay woke,” Chuck D says. “Nobody’s saying in order to fight the power you have to get on the front lines. It’s not the century for that. Most human beings are unprepared to get out there and sacrifice themselves with primitive fighting, holding a bayonet and shit. If you know better, say better. Don’t truncate your beliefs for somebody who’s dangling a job in front of you or something that looks to be the fruit that takes you a little further. Stay woke, stay you.”

Take the Power Back: Prophets of Rage Descend on the Republican National Convention