Remember the Super Bowl? Way back in February, the yearly sporting event celebrated its 50th anniversary, and British rock foursome Coldplay were selected as the primary act for its prestigious halftime show. Following in the tradition of Bruce Springsteen, Prince, and Madonna, Chris Martin and Co. bopped their way through hits and special guests, notably Bruno Mars and Beyoncé. It was undoubtedly a landmark moment for the band, but thanks to the internet, it will hardly be remembered as such.

Because if you just read Twitter or hot-take journalism, you’d think that Coldplay were just boring, out-of-touch time fillers bridging the football game to the point where Bruno Mars can make you hear “Uptown Funk” for the billionth time and Beyoncé could perform the live debut of the powerful, politically charged “Formation”. As Fuse pointed out in a bluntly titled article, Why Coldplay Became a Punchline at the Super Bowl, the “reviews” of the set were hardly reviews at all, but more sticking the performance into a binary that had to exist at a game where there is only one winner and one loser. If Beyoncé won the moment, then Coldplay surely had to lose. 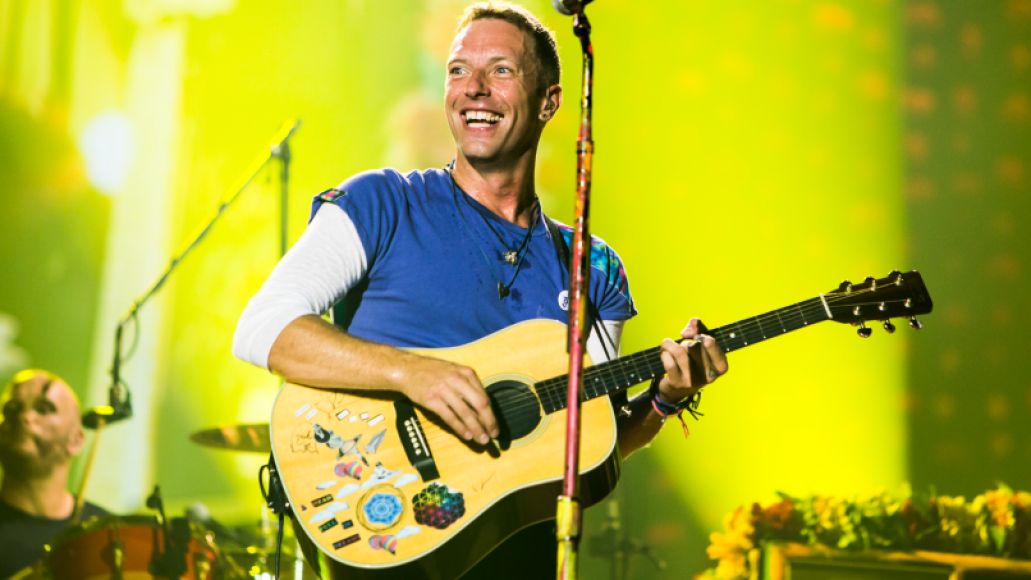 On Saturday night, appropriately at a sold-out stadium that has been used to host Super Bowls of the past, critics of the band seemed far more out-of-touch than the NFL did for booking them. After all, making Coldplay a punchline dates back to a video game battle between Paul Rudd and Seth Rogen in The 40-Year-Old Virgin, so it wasn’t like the media’s mocking of the band was a revolutionary stance. Looking around at nearly 60,000 fans, the cross-section of society was diverse in both race and age. Grandparents, snapchatting young people, and even children packed the stadium, with the only true defining characteristics shared by all the fans being their enthusiasm and their white LED wristbands. Where as Coldplay-hating might attract the retweets, a Coldplay concert is more reflective as a whole of what the music-listening society actually looks like, and what they actually enjoy, than anything you’ll find on a website like Twitter.

The heart of this is Martin. Nothing against the rest of Coldplay (guitarist Jonny Buckland, bass player Guy Berryman, and percussionist Will Champion), but the band uses Martin as their ambassador for a reason. From the opening moments of “A Head Full of Dreams”, Martin is out on the stage’s huge extended catwalk, leaping in the air with a giant grin on his face. This smile, often times open-jawed with eyes opened huge, is flat-out contagious. It’s the antithesis of cool, but when you’re entertaining tens of thousands at a time, there’s nothing remotely relatable about playing it cool. 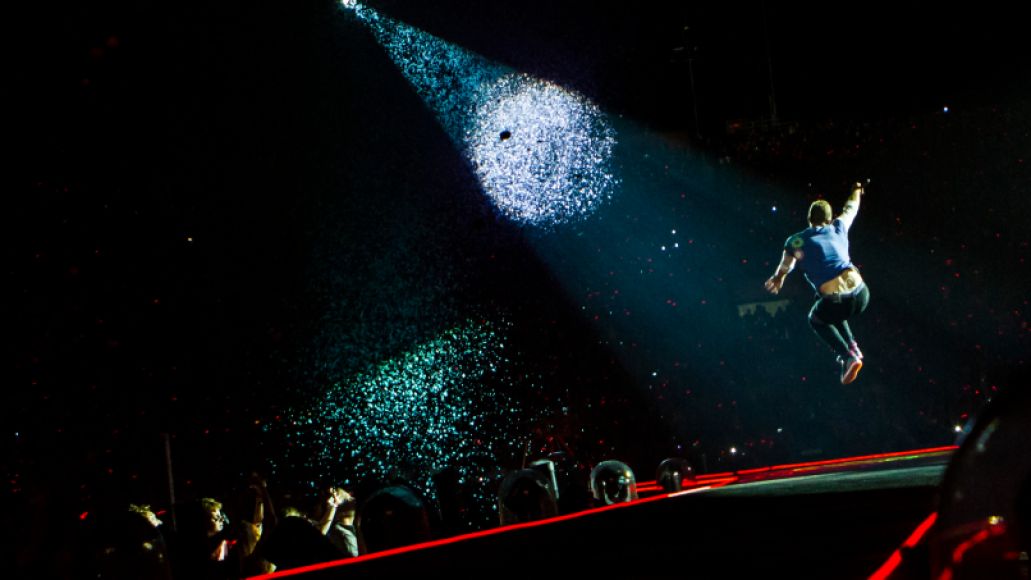 Midway through the set, Martin reflected on this, saying he wished the audience could feel what it was like to perform for so many people. He was giggly and gleeful, enough so that the audience didn’t have to try too hard to put themselves in Martin’s shoes. This can also be said for the band’s more grandiose gestures, be it paying tribute to David Bowie (and everyone that we were missing) with a cover of “Heroes” or alluding to a global unity ahead of “Everglow”.

But even more than Martin’s words, the sounds and sights of the performance gave the sea of fans a sense of togetherness. Where many big concerts will have fireworks or flames or confetti to punctuate the night’s peaks, Coldplay had all of these. Fireworks appeared for numerous songs, and so did fire and confetti. Balloons appeared for “Adventure of a Lifetime”, and the LED wristbands were put into effect throughout the night. It was like Coldplay surveyed large concert tours of the past and chose the most effective moments from all of them. Lasers? Yup. Satellite stages? Of course. Special guests? Well, I guess this show didn’t have it all. 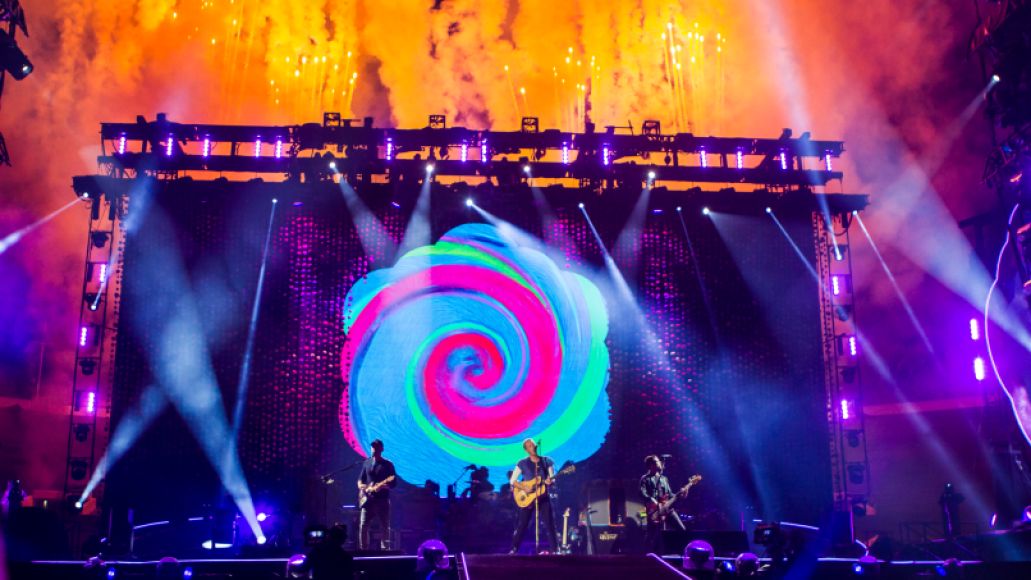 And holding it all together was the music. Few talked about Coldplay’s actual songs when criticizing their Super Bowl set, but really, if there is anything to knock Coldplay on, it would be that you just don’t like their songs. Because even a two-hour set from them is not enough for them to trudge out all their hits. “Yellow”, “The Scientist”, “Hymn for the Weekend”, “Paradise”, “Clocks”, and “Viva la Vida” all showed up on Saturday as massive moments, played with precision and receiving the kind of response that anthems deserve at football stadiums. And the night’s highlight, a mid-set run through “Fix You”, saw Martin sprint the length of the catwalk and leap back to his bandmates just as the song reached its climax.

The fact of the matter is that outside of Bey, you can’t reach the level of playing the world’s biggest stages without people trying to knock you down. Whether it’s Kim Kardashian taking down Taylor Swift in a carefully edited video or U2 making the mistake of sending their music directly to your phone, you rarely hear to point of view of the quiet fans of grand gestures. Maybe it’s because we know that no matter what we say about Swift or U2 or Coldplay, they are too big for any quips to do any real damage. They are punching bags that we can’t really hurt. And it only takes going to a stadium and seeing them deliver to know how small we are in comparison.

Setlist:
A Head Full of Dreams
Yellow
Every Teardrop Is a Waterfall
The Scientist
Birds
Paradise
Always in My Head
Magic
Everglow
Clocks
Midnight
Charlie Brown
Hymn for the Weekend
Fix You
Heroes (David Bowie cover)
Viva la Vida
Adventure of a Lifetime
In My Place
Don’t Panic
God Put a Smile Upon Your Face
Amazing Day
A Sky Full of Stars
Up&Up 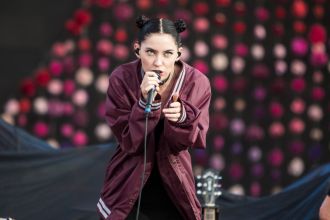 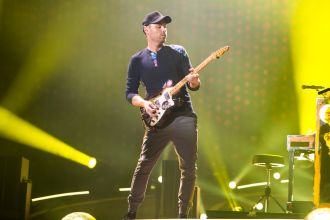 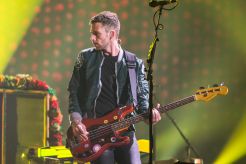 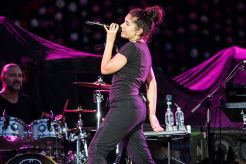 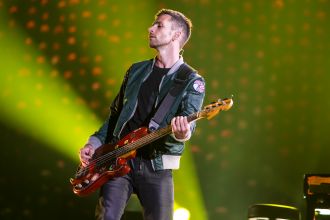 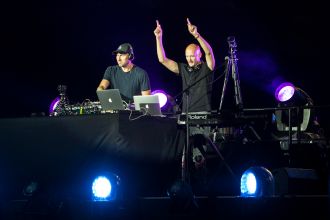