“What’s the single most influential moment in the history of hip-hop?” Questlove asks early on in his memoir, Mo’ Meta Blues. It’s a simple enough question – potentially a boring one – that’s been asked and answered countless times. Our Jeopardy-trained minds leap to influential cuts like “Rapper’s Delight”, seminal hip-hop groups like Public Enemy, or even the tragic casualties of the East Coast-West Coast rap rivalries of the ‘90s. But then we remind ourselves that the person asking is one of our generation’s most celebrated musicians, an obsessive musicologist, and a pop-cultural freethinker who never fails to surprise.

“It’s the episode of The Cosby Show in which Stevie Wonder’s driver crashes into Denise and Theo,” answers Questlove. How could a television episode change hip-hop forever? “Simple: It was the first time that 99 percent of us who went on to be hip-hop producers saw what a sampler was.” It’s in that moment that readers, if they don’t already know, come to understand that when Questlove poses a question, class is officially in session, and he’s anything but your average professor in a tweed jacket. 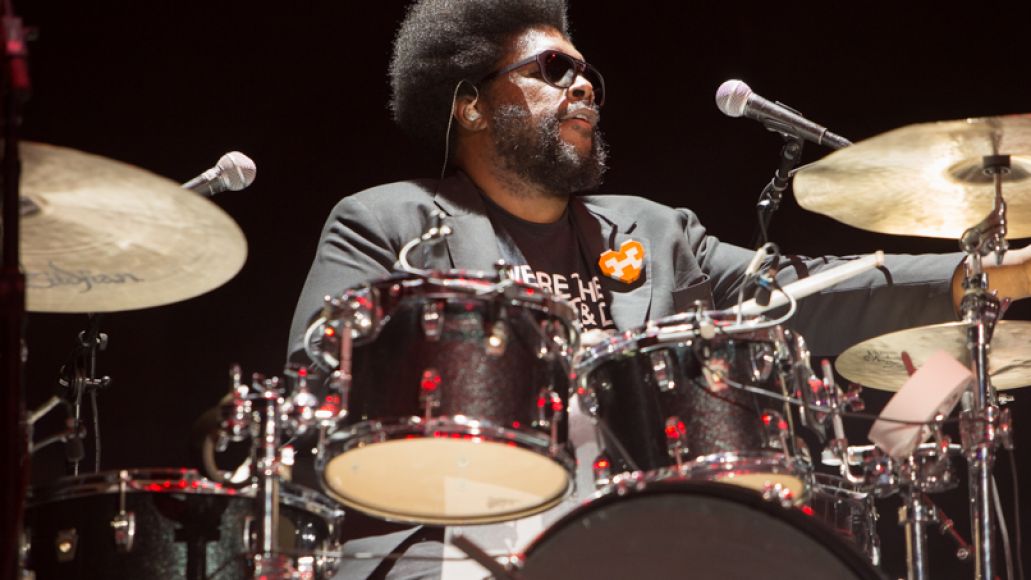 Questions have always been the driving force behind Questlove’s journey through both music and life – it’s no coincidence that he often stylizes his name with a ‘?’ instead of a ‘Q.’ However, it’s been the answers he’s arrived at over the years that have set him apart and ultimately changed the landscape of both hip-hop and popular entertainment. Where others may have fled after first meeting a young, troubled Tariq Trotter (later known as Black Thought), Questlove instead gathered pots, pans, and buckets to take to the park and bang beneath the future Roots frontman’s potent freestyling. A decade later, when Kanye West’s emergence as a rapper shifted the hip-hop playing fields and left The Roots feeling obsolete, the band turned inward to make some of their most moving and personal music to date. And when faced with the unprecedented dilemma of figuring out how to age gracefully as a middle-age hip-hop band, Questlove and Trotter thought outside the beatbox and joined Jimmy Fallon’s creative team, forever changing the concept of what a late-night house band can be in the process.

The latest burning question in Questlove’s life seems to be finding a way to share all he knows and loves about music with an audience who truly appreciates that type of crate-digging intimacy. His answer has arrived in the form of Questlove Supreme, a new three-hour weekly show curated and hosted by the drummer on Pandora. Each episode features an exclusive guest, in-depth conversation, and a handpicked mixtape of Questlove-approved jams.

Anyone who follows Questlove knows that any program he hosts will be a music junkie’s dream. The little boy with an afro who grew up drumming in his dad’s doo-wop revue, reading archived Rolling Stone album reviews on microfilm, and decorating his bedroom with collages made from music magazines has grown up into an authority just as comfortable talking about Kurt Cobain and Neil Young as A Tribe Called Quest and Stevie Wonder. “You have to bear in mind that Questlove is one of the smartest people on the planet,” legendary music critic Robert Christgau has said. “His music knowledge, for all practical purposes, is limitless.”

It’s that same endless music knowledge that fans of all genres have come to appreciate from Questlove in his work alongside Fallon on both Late Night and The Tonight Show. The popular “Freestylin’ with The Roots” segment asks the band to improvise songs on a given topic across a wide spectrum of musical styles. The result is a must-see blend of comedy and musical dexterity. When he’s not thinking on his toes, Questlove spends hours digging through the record crates of his mind to find the perfect songs to play as Fallon’s guests walk onstage. One of his funniest choices was greeting the famously gap-toothed Michael Strahan with Dave Matthews Band’s “The Space Between”. It’s that same dedication to finding just the right song that Questlove promises to bring to his new show. “This is a commitment deeper than any girlfriend I’ve ever had … or any diet I’ve ever tried to stick to,” he recently told The New York Times, explaining that he whittles down his playlist from more than 200 songs for each episode.

If Questlove Supreme was just three hours of music tips from one of our culture’s great tastemakers, that’d be reason enough to tune in. However, the show promises to be far more than that. Questlove, who teaches music courses at New York University, has never shied away from delving into the critical social issues that music shines a light on. For instance, on his first episode, he and actress Maya Rudolph spoke about the representation of children in 1970s soul songs. “It’s the black nerd version of NPR,” Questlove jokes, but these conversations can only occur when we love music enough to understand that songs tell us so much about who we are as a people – that a record collection and an insightful DJ have as much to teach us as any text.

As Professor Questlove might say, “Come for the jams. Stay for the lesson.”