In celebration of National Video Game Day, we’re revisiting our list of the best video games based on bands.

This week, the Los Angeles Convention Center hosts the Electronic Entertainment Expo, otherwise known as E3, which showcases the hottest upcoming video games and game-related software. Wondering what will follow Xbox 360? Are you still waiting for that new Tomb Raider follow up? Getting tired of the Kinect and in need of something more? Pending this week’s results, you might have answers to all of those questions.

In light of the festivities, Consequence of Sound waxed nostalgic and felt the urge to talk shop, asking one question: “What bands have made use of the video game medium?” The geekiest contributors over here suggested some ridiculous titles and then chiseled it down to ten (mostly) admirable titles. Some might surprise you of its existence, others might remind you why you should still be playing them. Whatever the case, we’re hoping this list changes in the future — perhaps this year’s showcase has some worthy contenders. We’ll find out at the end of this week!

p.s. If you’re looking for full coverage of E3, don’t forget to follow any and all updates from our friends over at Nerdy Show!

They’re the greatest band in popular music history, so why shouldn’t we have expected them to issue the greatest music game in modern gaming history? In 2009, that’s exactly what Harmonix Music Systems did when they released The Beatles: Rock Band. Everything about this product sings with quality; from the meticulously detailed, Apple Corps-assisted artwork to the creative use of unreleased studio chatter placed amid loading screens to the inclusion of harmonies that only added emphasis to each song and the player’s experience. The developers spared no expense and, in most cases, went the extra mile. Not only did they receive help from George Harrison’s son, Dhani, but they even hired acclaimed Beatles impersonators for motion capturing.

Although the game’s admittedly short, the replay factor is high, which comes as no surprise given that, well, it’s The Beatles. For over 50 years, people have spun A Hard Day’s Night or Abbey Road religiously, and that ideology explains why the game’s so alluring even three years later. While the Rock Band franchise fades into obscurity, this gem of a game stands on its own — it represents the peak of its kind. Perhaps that’s why few gamers are interested in the other Rock Band products anymore; think about it, where do you go once you’ve climbed Everest? –Michael Roffman

In 2002, one couldn’t turn on the television without seeing or hearing Britney Spears — she was arguably at her career best. In the previous year, she became the only female artist in SoundScan history to have their first three albums debut at number one, and she’d break that record again a year later with the release of her fourth studio LP, In the Zone. So, it only made sense that she would get her own video game.

THQ issued Britney’s Dance Beat to commercial success. It wasn’t the first rhythm game of its kind — the Spice Girls beat her to that back in ’98 with the critically panned Spice World — but it’s really the first artist-endorsed one that worked. It would be years before the Kinect came in and changed everything, so players had to follow dance moves strictly through a variation of buttons — basically, it was a high-tech, more colorful version of Simon. Players took on the role of a faceless dancer trying out for Britney Spears’ dance crew, and each win would unlock a number of exclusive videos. As GameSpot wrote back in ’02, “…Britney fanatics will undoubtedly walk away with a smile.” They still do. –Michael Roffman 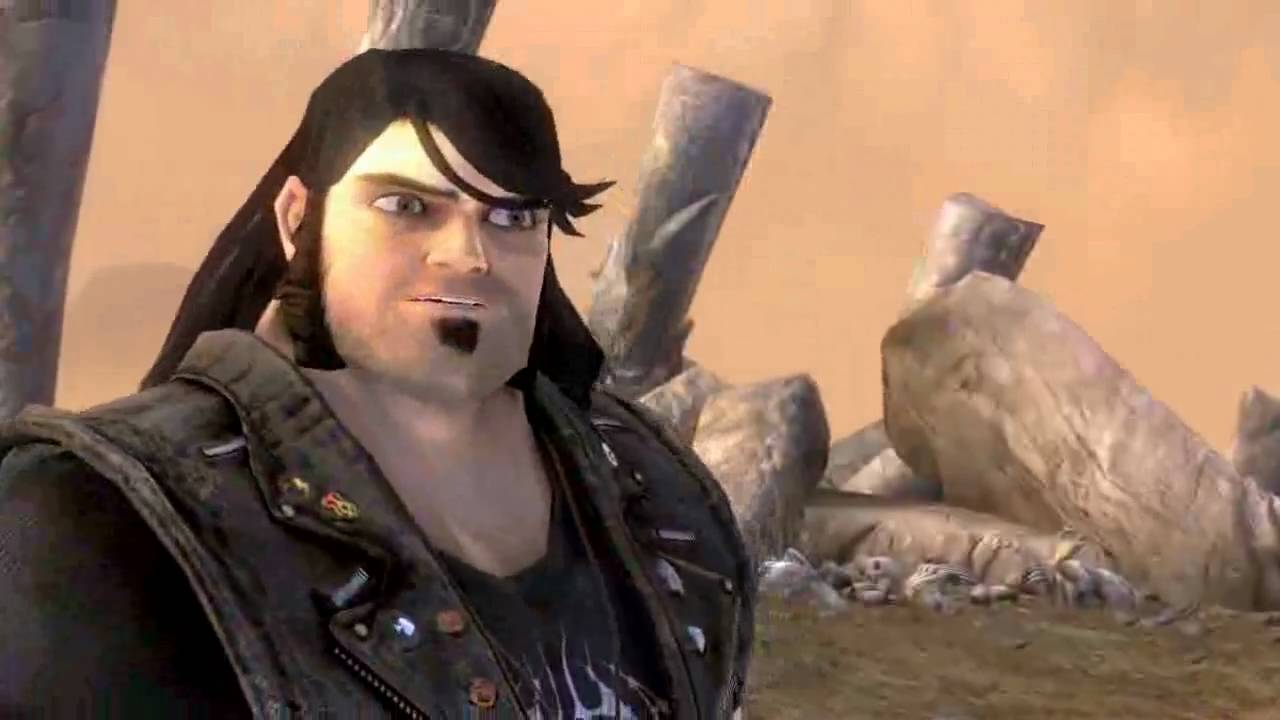 Even the world of gaming has its living legends, and game designer Tim Schaffer (Psychonauts,The Secret of Monkey Island) is one of them. In 2009, Schaffer brought his love of metal music to nearly every aspect of the pixelated world of BrÃ¼tal Legend, the design of which was inspired by heavy metal album covers. As the Jack Black-voiced roadie Eddie Riggs (named for Iron Maiden’s Eddie the Head mascot and his creator Derek Riggs, designed as a mix of Black and Glenn Danzig), players battle the minions of Doviculus (voiced by Tim Curry, though Ronnie James Dio had recorded some of the game before being replaced) and his henchman General Lionwhyte, who is voiced by Rob Halford, designed after David Bowie and David Lee Roth and named after glammetal band White Lion.

Along the way, there’s aid from Kill Master, voiced and designed fittingly after Lemmy Kilmister; Fire Baron, designed after and voiced by Halford; Amazonian Rima, voiced by Lita Ford and made up like KISS; and the Guardian of Metal, AKA Ozzy Osbourne. And it just goes on and on like that, with nigh every character, setting, plot point, and even bit of dialogue a nod to metaldom. It’s like a metal head Easter Egg hunt trying to pick up on all the references. What’s even better (and entirely unsurprising for a Schaffer work), is that it’s a damn fine game, earning an 82 on Metacritic. –Ben Kaye

Yeah, this one caught us off guard, too. Frankie Goes to Hollywood’s claim to fame is “Relax”, a live version of which was included on cassette with this 1985 game for Commodore 64. The goal was pretty straightforward: You’re in Liverpool (title of the band’s second album) trying to make your way to the Pleasuredome (title of their first). It’s the getting there that starts to sound really ridiculous. In order to become a 100% real person, you complete a series of puzzles and mini-games to collect “pleasure points” in the form of four attributes the band sang about, with “love” and “faith” represented reasonably by a heart and a cross. “Sex” is depicted as a pair of yin-yang sperm, while “war” is a condom (okay, it’s probably supposed to be a missile, but look at it — it’s a condom).

When you earn these points, the game reads “Frankie give you X more pleasure units,” sic. The game involved collecting items like a thirsty cat and completely unrelated mini-games like two heads floating in a river spitting at each other through a wall or collecting falling flowers to make a bunch. Oh yeah, and somewhere in there you solve a murder (the murderer is a vegetarian, atheist, red wine enthusiast, btw). ’80s UK gamer magazine Zzap!64 gave the game a Gold Medal award and a 97% rating. Sigh, the ’80s had some weird moments. –Ben Kaye

“The hottest band in the country is about to take over the planet!” This was the tagline used to promote Journey’s 1983 induction into arcade halls across the globe. For a game based solely on a band, this one might be the oldest, and naturally, it’s probably the most simplistic of them all, too. It was a puzzle game that offered the player the opportunity to choose one of five planets, which each featured a mini-game starring one of the five Journey members. Each win delivered one instrument, and once all five were collected, the player then acted as the roadie for Journey as they performed “Separate Ways” onscreen, which in actuality was just a cassette rolling from within the machine.

Despite its analog nature, the game was pretty advanced. Players could identify the band’s members through black-and-white stills taken while they were on tour — so, for example, those completing Steve Perry’s mini-game probably found solace in seeing the guy’s trademark mane. What’s more, the machine was originally going to take photos of high-score winners, but as the game’s Wiki page points out, that plan was scrapped when one winner flipped off the machine. To think, this was before Tipper Gore, too. –Michael Roffman

The 10 Best Video Games Based on Bands