Comics to Screen is a recurring feature in which Ben Kaye analyzes the constantly evolving leap from comic books to screens of all sizes. This time, he discusses why the MCU’s streaming branch may be even better than its movies. Note: Spoiler warnings for those who have yet to see Luke Cage.

Marvel has been on a winning streak for eight years now, ever since Iron Man hit cinemas. They’ve redefined superhero movies on their own terms while simultaneously creating the now much-imitated concept of an interconnected cinematic universe. But even as franchise series are popping up everywhere from Sony (Ghostbusters) to Universal (the Universal Monsters) to Paramount (Hasbro), Marvel is yet again a step ahead thanks to their television branch. Beginning with Agents of S.H.I.E.L.D. on ABC, Marvel’s TV projects have always been tied into the larger Marvel Cinematic Universe. It’s their recent productions with Netflix, however, that have really taken their cross-medium storytelling to new heights.

In fact, what Marvel Television and Netflix are doing with Daredevil, Jessica Jones, Luke Cage, and Iron Fist on the way to The Defenders may be an even greater success than what they’ve accomplished with The Avengers.

It’s true that Iron Man was a fairly outsider character before Robert Downey Jr. put on the suit that launched the MCU, but as far as obscure superheroes go, the Netflix quartet take the cake. Marvel had at least some cultural cache to work with when they dug into Hulk and Captain America; for the most part, if anyone had even heard the name Daredevil prior to April of 2015, it was likely in connection to that failed Ben Affleck movie. And that was it. The fact that characters like Jessica Jones and Luke Cage are now part of the cultural discussion is an incredible feat. Marvel received heaps of praise for making Rocket Raccoon and Groot names people knew, and having established an entire series of series on the backs of relatively obscure characters is equally if not more admirable. 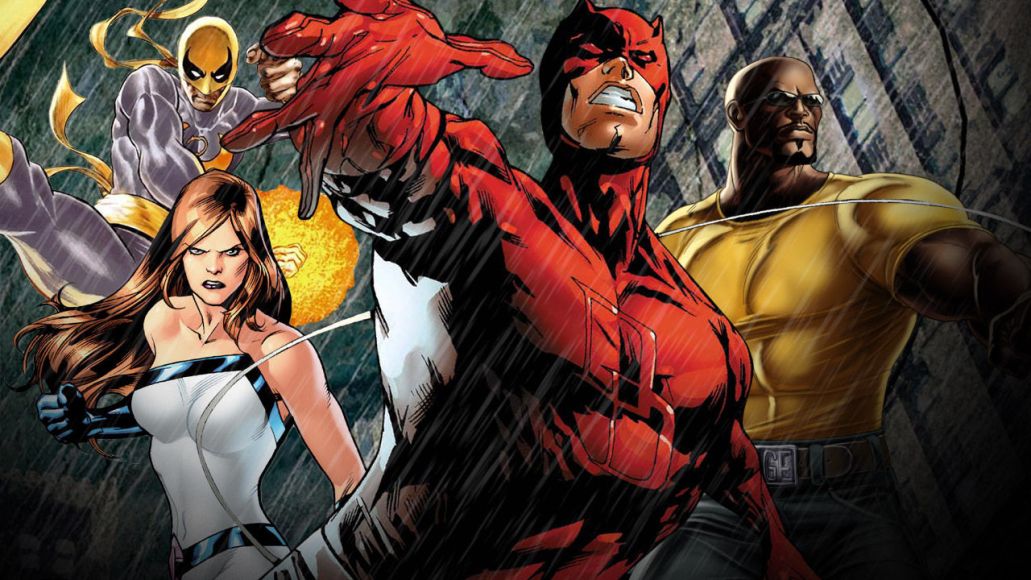 Not only that, but the vehicle of serialized television has allowed them to develop those characters in deeper ways than their cinematic counterparts. Although Rocket is incredibly fun, let’s face it — we really don’t know much about him. A pitying glance from Star-Lord and a brief tantrum is about all we get to understand a deeper woe tucked inside the genetically modified raccoon. Over on Netflix, meanwhile, we’re given hours to build an understanding of these people that let us invest more fully into their stories than we ever could with say, Captain America. Sure, he’s a true-blue good guy, but that’s as far as it goes — which is why it feels a bit icky watching him make out with Sharon Carter just days after his one true love and her aunt, Peggy Carter, dies.

Flashbacks allow us to get a sense of the deep-seated motivations for almost every major player in Cage, and there’s quite a few. We get to watch anxiously as Matt Murdock slowly approaches a dark line on Daredevil and witness Jessica Jones struggle with post-traumatic stress in a very visceral way on her own show. These things don’t have to be force fed to us with quick scenes or telling bits of dialogue because the showrunners can invest the necessary time into revealing them through viable actions, reactions, and interactions.

This also allows the Netflix shows to accomplish something no Marvel movie has managed save for The Avengers: create a supervillain worth caring about. Do we even really remember Red Skull, Abomination, or Malekith? Who was Zemo again? The movie baddies are there to service plot more than provide an interesting antagonist in which audiences can invest. On the other hand, you reach a point in Daredevil where you actually agree with Kingpin or The Punisher. Kilgrave is terrifying, but watching his plot unfold earns that fear without Jones needing to constantly hammer it home. Luke Cage may be saddled with the least interesting adversaries, but at least they’re fleshed out well enough that we don’t simply write them off. In fact, I was almost disappointed to see Cottonmouth killed, only to find gratification in watching Black Mariah’s descent into pure villainy. 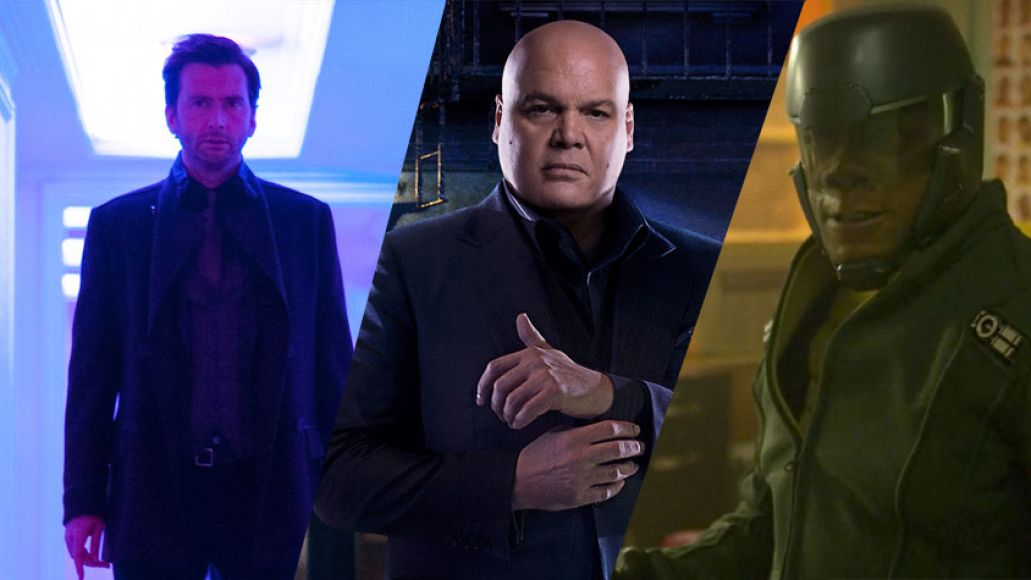 Another asset of this sort of long-form storytelling is that the interconnectivity between the properties is far more manageable and unhurried. In the movies, having Agent Coulson pop in was the only way to bridge the pre-Avengers films. After that, there was a flimsy (but cute and fun) meeting between Ant-Man and Falcon to fold in the former, a quick mention of Dr. Strange in Captain America: Winter Soldier, and GotG still largely exists on its own. We’re left scratching our heads when no one but Iron Man intervenes when the freakin’ President of the United States is kidnapped and it’s up to Thor alone to confront what’s essentially an interdimensional invasion.

That sense of “where the heck is everyone else” doesn’t exist on the Netflix side of things mainly because of scale. You’re not calling in the Avengers to stop a gang war, no one really believed Kilgrave was real, and the Luke Cage drama was very much Harlem-based. Yet, still they’ve managed to connect all those shows to each other and the MCU without shoehorning. Hell’s Kitchen is in the state we see it in during Daredevil because of what happened in The Avengers. “The Incident” is everywhere, especially in Luke Cage (the Judas bullets and the street salesman in particular). Introducing Cage as a secondary character who’s intimately (in more ways than one) connected to Jones is the type of world expansion that hasn’t been accomplished yet in the movies; everyone has always been separate first. (We’ve yet to see how successfully Black Panther and Spider-Man transition to their solo films, though.)

Claire Temple, the common thread to each series, has also proven to be a better Coulson than Coulson. She has true function within each story, helping to develop the main characters by her relationship with them. Instead of feeling like an outside force asserting influence, she plays an integral role. Hell, she even slyly bridges Luke Cage to Iron Fist: That martial arts flyer she sees at the end of Cage? It’s for the dojo of Colleen Wing, a primary ally of Danny Rand/Iron Fist.

Beyond character, perhaps the biggest advantage Netflix has had over the films is the deeper commentary they’re able to make. There’s meat on these bones, not just super-powered meat. Both seasons of Daredevil wrestle with the true meaning of justice in an unjust world, as well as tackling the concept of vigilantism in a much more grounded way than the politicizing that occurred in Captain America: Civil War. Jessica Jones deftly handled topics like rape, PTSD, and sexuality with intense honesty, all from a feminist perspective that never felt heavy-handed. The timeliness of Luke Cage can’t be overstated, as a profoundly complex black superhero who hates being called a “nigga,” struggles with the police, and strives to protect his neighborhood could not be more pertinent to today. We might see characters like Captain Marvel and Black Panther address similar topics in the near future, but these Netflix heroes got there first.

Of course, the shows aren’t without their flaws. Daredevil season two struggled with the same overstuffing as things like Avengers: Age of Ultron, and Luke Cage occasionally stumbled trying to reach its own lofty ambitions. (As far as I can recall, Jessica Jones was perfect television.) A few miscues aside, what Marvel Television is accomplishing on Netflix can be seen as the dream of the Marvel Cinematic Universe realized more completely than ever. The scale may be smaller in terms of spectacle, but it exceeds the films’ limits in almost every other aspect: story, character, and depth. With fully developed primary protagonists more varied and tonally disparate than the Avengers, it’s going to be extremely interesting to see where Netflix and Marvel take The Defenders; wherever it is, it’s going to be a story worth watching.

Are Marvel's Netflix Shows Better Than Their Movies?