Rush will mark the 40th anniversary of their classic 1976 concept album 2112 with a deluxe reissue that features covers by Foo Fighters’ Dave Grohl and Taylor Hawkins, Alice in Chains, Billy Talent, and others. As Rolling Stone reports, the hefty box set will also include a number of rare, live, and previously unreleased tracks as well as a DVD featuring a newly restored vintage 1976 Rush concert recorded at the Capitol Theatre in Passaic, New Jersey. It’s scheduled to arrive on December 16th, and pre-orders are currently available through Rush’s official website.

The inclusion of five contemporary covers makes 2112 – 40th a more interesting release than your typical box set. Performed by Grohl, Hawkins and Nick Raskulinecz (“Overture”), Alice in Chains (“Tears”), Billy Talent (“A Passage to Bangkok”), Porcupine Tree’s Steven Wilson (“The Twilight Zone”), and Jacob Moon (“Something for Nothing”), these covers speak to 2112’s influence and legacy. Also included are a retrospective look at the album and a Q&A with Rush guitarist Alex Lifeson.

Fans who want the full experience can splurge on a Super Deluxe version of the reissue ($124.99), which includes a 3-LP, 200-gram vinyl version of the album along with the 2CD/DVD set ($34.99 on its own). As if that weren’t fancy enough, it all comes packaged in a box lined with velvet flocking and stuffed with extras like a reprint of the 1976 Massey Hall handbill and buttons featuring each band member. The band is selling all kinds of crazy gift sets to go along with the reissue, including several that include a 2112 skateboard deck. Gnarly.

Each edition of 2112 – 40th includes comprehensive liner notes detailing the making of the album and newly designed artwork by Syme. Check out the Super Deluxe spread and full tracklist below. 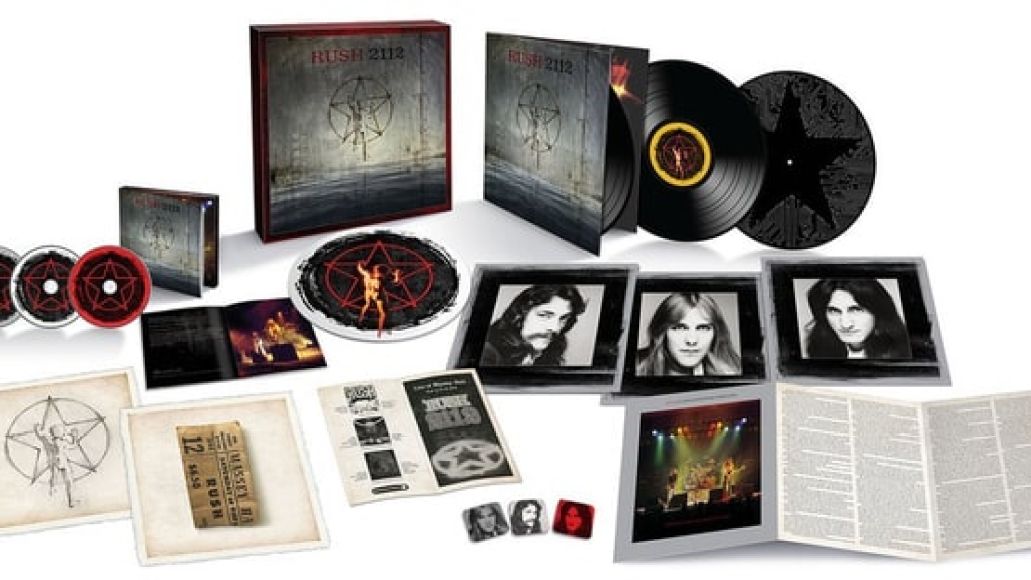 Bonus Videos
Overture: Dave Grohl, Taylor Hawkins and Nick Raskulinecz
A Passage to Bangkok: Behind the Scenes with Billy Talent
2112 – 40 Years Closer: A Q&A with Alex Lifeson and Terry Brown