The plot of Toni Erdmann might sound familiar to you. Winfried (Peter Simonischek) is an aging prankster with little ambition, except to dress up in zombie makeup and scare the daylights out of his family members. Ines (Sandra Hüller) is his uptight daughter, who works for a consulting firm that helps companies outsource jobs. Ines, who believes that fun is a “buzzword,” is ruthlessly good at what she does for a living, which makes her bad with people. When her father asks if Ines is happy, it’s as if no one had ever asked before. “Happiness is a strong word,” Ines dismissively responds.

Taken at face value, the logline appears to resemble any number of American comedies: A loving, if slightly unbearable, parent wants to teach his loved ones a lesson about letting go and living in the moment. His family members initially reject the olive branch, but slowly come to see the world through his rose-tinted perspective. This setup is the foundation of films ranging from Peace, Love, and Understanding to Mrs. Doubtfire, which end in tears, laughter, and the characters singing a popular song together. In Toni Erdmann, Ines belts Whitney Houston’s “Greatest Love of All” to a room full of unsuspecting strangers while her father plays the piano.

You have never seen a movie quite like this one, though. Toni Erdmann, which is at times painful in its keen observations, is finely attuned to the bitter, bruised relationships that slowly take root over decades, often without our noticing. When the movie, directed by Maren Ade (Everyone Else) opens, it’s clear that Winfried and Ines haven’t seen each other for a very long time. They have different ways of avoiding the renewed relationship. Ines pretends to take a work call on her phone, pacing outside to further demonstrate how extremely busy she is. Winfried deflates uncomfortable situations by slipping into a character, one he seems to have developed as a coping mechanism. Putting on redneck teeth — and sometimes a black, dime-store wig — Winfried calls himself “Toni Erdmann.”

The limits of their avoidance are tested when Winfried, after receiving a half-hearted invitation from his daughter, decides to visit Ines in Bucharest, where her office is stationed. Because he isn’t the kind of person who calls first, the gentleman drops by her work and waits there for three hours. Winfried spies his daughter having a walk and talk with executives and idly strolls right next to them — seemingly unnoticed. Ines later sends her beleaguered secretary down to retrieve her father, explaining that she did notice him. She just didn’t say hello.

Winfried, determined to get through to his daughter, continues to drop in on her as Toni. The character describes himself, depending on the occasion, as a life coach or the German ambassador to Romania, even though he looks more like a vampire than a diplomat. Because he’s not very good at the ruse, those around Winfried know that he’s a fraud, but they are either too nervous or too embarrassed to call his bluff. When the man encounters Henneberg (Michael Wittenborn), the CEO for whom his daughter works, Winfried drops the act but not the smirk. He tells Henneberg that he’s hired another daughter in Ines’ place, but Winfried thinks the new version is an upgrade. “The cakes are better,” he says. “She cuts my toenails.”

What makes Toni Erdmann, the finest comedy in recent memory, so wonderful and beguiling is the deep undercurrent of sadness that informs its eventual life lessons. Winfried, who has recently lost his dog, has little left to live for. His ex-wife has remarried and his elderly mother is dying. He knows that bringing others joy, even if the gift isn’t accepted, is all there is left. When he meets a group of Romanian oil workers who will soon be laid off from their jobs, Winfried tells them not to lose their sense of humor. Because he doesn’t speak the language, the message unfortunately gets lost in translation.

Although the movie can best be described as “sad funny,” Toni Erdmann is frequently uproarious, featuring two or three of the funniest scenes you’ll find in any movie this year. Ines, after being instructed by her boss to build camaraderie among her co-workers, invites them to her birthday brunch. While getting ready, she gets trapped in her party dress, afflicted with one of those irritatingly long zippers down the back. It’s a Gucci rat trap. When the doorbell rings, Ines decides to ditch clothing altogether, telling her guests that letting it all hang out — so to speak — will be good for team-building. Either she’s having a nervous breakdown or a breakthrough, and it’s difficult to tell which.

Toni Erdmann, filled with laughter punctuated by melancholy, walks an extremely difficult line. Credit should be given not only to Ade’s bravura script, but to the fine performances from her actors. Hüller, who previously played an epileptic student mistakenly believed to be possessed by the devil in Requiem, excels as a woman plagued by other demons. Ines hates her job and what it has made her become, which is why she continues to reject her father’s attempts to reconcile. “Are you really a human?” Winfried asks her. Ines doesn’t answer, and it’s likely because even she isn’t sure anymore.

What Toni Erdmann offers — in all its crushing optimism — is a chance at absolution. Running nearly three hours, Ade’s film is almost overwhelming in its hopefulness, which is precisely what makes it so necessary. Here is a movie that truly believes in the power of comedy to help us heal, whether it’s the film’s broken characters or the audience. If Tolstoy wrote that “all unhappy families are alike,” it’s difficult not to fill the space between these people with our own pain and sorrow, the things we wish we could say to those we love and everything that keeps us from doing so. “How are we supposed to hang onto moments?” Winfried inquires in a moment of rare vulnerability. All we can do, as Toni Erdmann shows, is try — even if it means wearing fake teeth and a bad wig to get there. 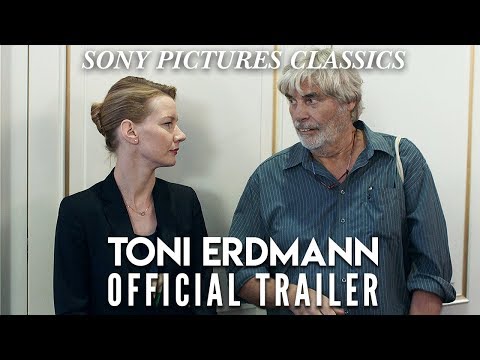