Despite being the most undersold year in the festival’s history, Bonnaroo 2016 ended up being another incredible event. Still, even those who appreciated the extra breathing room likely worried about the future of the veteran music fest. Was this the beginning of a decline? Another sign of festival over-saturation and ubiquity?

Now that the 2017 lineup has dropped … well, sadly those worries still hold. To its eternal credit, Bonnaroo has well-earned the sort of devotion that will bring people down to The Farm regardless of who plays. Still, that doesn’t change the feeling that this year’s bill feels like an unfortunate sign of the times. Call it the curse of the ever-premature booking practices (‘Roo founder Ashley Capps even told us “it starts earlier every year it seems”) or the homogenization of the scene, but it just doesn’t feel inspired.

One has to wonder if the cash spent on U2, the festival’s one big get, handcuffed organizers. While they deserve major kudos for booking Bono and the boys, it’s strange to see them on this particular lineup. Rock fans only have the Royal Blood, Glass Animals, Cage the Elephant, and Cold War Kids sort of bookings to work with leading up to the headliners, and that’s a hard thread to follow. Where are the mid-tier legacy acts and classic rockers? 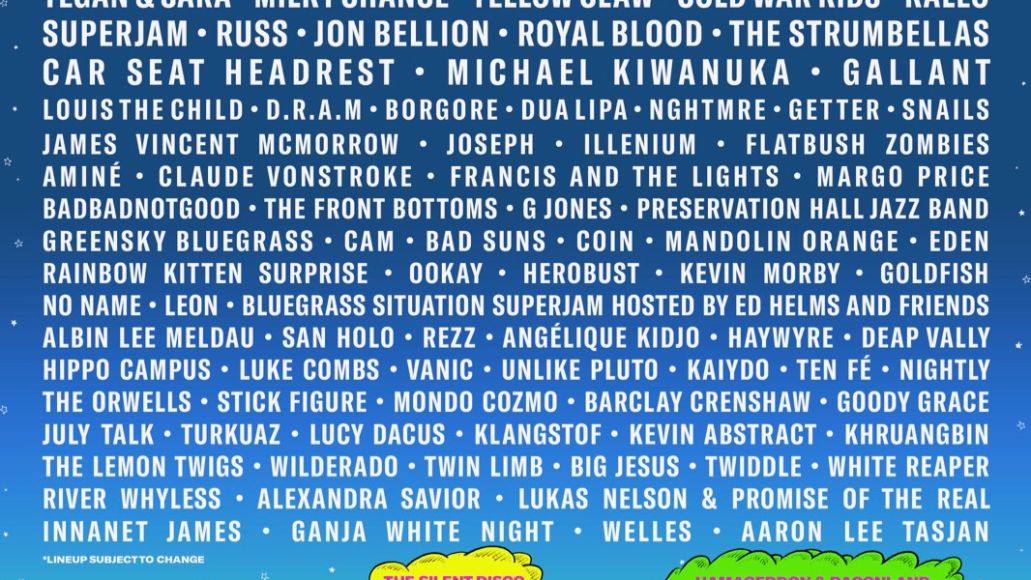 Any sort of metal or hard rock performances look to be totally absent this year, as do a lot of Americana styles. What little there is (Margo Price, Greensky Bluegrass, Kevin Morby) is so sparse it seems tacked on to fill the That Tent slots leading up to Ed Helm’s annual Bluegrass Superjam. Jam fans, meanwhile, are sure to be disappointed with only yet another Umphrey’s McGee show to tide them over.

In place of these once trademark sounds is the commercial giant that is eating up bill space across the board: EDM. Alas, even those bookings fall flat, with Major Lazer and Flume feeling like a case of the last-years, and acts like Marshmello, Borgore, Getter, and NGHTMRE likely leaving electronic fans itching for something of a palette cleanser.

Of course, even a poorly constructed lineup has its bright spots (Car Seat Headrest, Gallant, No Name, Lucy Dacus, Flatbush Zombies, The Lemon Twigs). But even the killer comebacks (The xx, Lorde) and risers (The Weeknd, Chance the Rapper) fail to give the bill distinction in 2017. Perhaps in trying to appeal to ever younger and changing tastes, the festival has sacrificed the types of surprises that used to add such an unrivaled wow factor. Literally — we usually do a Most Surprising category in these recaps, but couldn’t even find enough to even write about. Instead, we get another Red Hot Chili Peppers headlining spot and Tegan & Sara being the festival’s most unique billing.

Throwing a music festival has never been harder, what with the influx of competition and the decrease in truly standout booking possibilities. It’s reassuring to know that Bonnaroo’s legacy and community is strong enough to endure any downturns; at the same time, it wouldn’t be surprising if this year’s lineup failed to make up much ground on the ticket sales lost over the last half decade.

Still, it’s a bill worth considering, so read ahead for our complete breakdown.