Dark Night approaches the difficult topic of public acts of gun violence in America in a way at once familiar and arguably necessary. With Sarasota, Florida, as its case study, the film offers a version of the 2012 shooting tragedy in Aurora, Colorado, during a screening of The Dark Knight Rises; though this film is a fictionalized rendering, the core details are the same despite this film taking place in a world where, as a TV in the background of one early scene suggests, James Holmes’ assault on an unsuspecting movie theater has also already happened. The film takes a languid, impressionistic approach to the lives lost and the particular life that ended them, and to reiterate, if it’s a familiar way to take on such an incident, it’s also arguably the only real way to approach the topic with the necessary dignity for the lives lost.

The film functions like a slow, lingering walk to the gallows as much as anything. Over 87 minutes, director Tim Sutton follows an assemblage of people young and old, from all walks of life, on their appointed daily rounds. A young woman obsesses over selfies and her own body image. Two teenage skateboarders smoke e-cigarettes and dye their hair. A pair of friends work at the local Costco and hang out at a nearby lake. A soon-to-be college freshman and his grandmother are interviewed by an unseen host about his life for reasons the film leaves unclear. An ex-Marine and his wife go about their days, he to a veterans’ meeting and later a gun range, his wife to her nursing job. And as all of these lives unfold, unremarkably, a young man with penetrating eyes obtains guns and vomits out of the side of his car in a fit of anxiety and boiling rage.

Let’s just address the Elephant in the room: Dark Night bears more than a passing resemblance to Gus Van Sant’s Palme D’Or-winning visual poem about the moments leading up to the Columbine shootings. And yet, there is a political undercurrent to Sutton’s film that Van Sant mostly eschewed in favor of a more humanistic approach. Though that same humanism is applicable here as well, Sutton rather pointedly includes a number of small indications that Dark Night aims to comment on the culture that engenders the acts of violence around which the film is brutally, inevitably based as much as the acts themselves. Though it’s clear before long which of the film’s many rotating protagonists is actually its antagonist, part of Dark Night’s eerie power, and one of its stronger commentaries, is how long the film allows the viewer to wonder just who it might actually be. Because it could be anybody, at any time, with seemingly little to no provocation.

After a point, the film’s meditative approach will either engage the audience or it won’t. Dark Night allows for little to no room in between. The film’s entire purpose is to capture the mundanity of the last day of a great many lives, and it is deeply unsettling in this way, but the thesis is the whole in that regard. Sutton finds great dramatic effect, however, in the film’s artfully rendered sound design. Much of Dark Night takes place in near-to-complete silence, with many scenes only featuring ambient, diegetic noise, aside from a handful of truly unnerving bursts of sound. In this film’s paranoid version of modern suburban America, a group of young girls screaming or a man suddenly bursting forth with a frantic scream in his car sounds an awful lot like a sudden gunshot echoing in a place where it’s not supposed to be. There’s a sense of violation to the film’s periodic bursts of shrill noise that offers more of an immersion into this hellish, too-familiar world than many of the film’s long-take images can muster. This is by design.

While Sutton mostly aims for subtlety here, occasionally the film shows its hand just a little too neatly; in particular, the “interview” segments with the young man (it’s never clear how much of his portion of the film is hallucinatory) hit hard on larger themes of gun violence as a function of modern video gaming, even as he insists that “kids can differentiate fantasy from reality.” And yet, there are moments of true terror to be found among the silence and the encroaching existential dread in which the film deals most prominently. Chief among them is a nearly single-take sequence in which the film’s burgeoning mass murderer wanders from one nicely appointed subdivision yard to another with an automatic rifle in tow, a black mark on a serene landscape, until the film cuts to an acquaintance of his giving a guitar lesson. As she plays through “You Are My Sunshine,” the barrel of the rifle slowly makes its way into view, a stark reminder that in the present time, death is omnipresent, and not in the simpler sense of the natural reward that greets us all in old age. Sometimes one second you’re headed to a neon-filled movie theater in a shopping mall, and the next, it’s over. 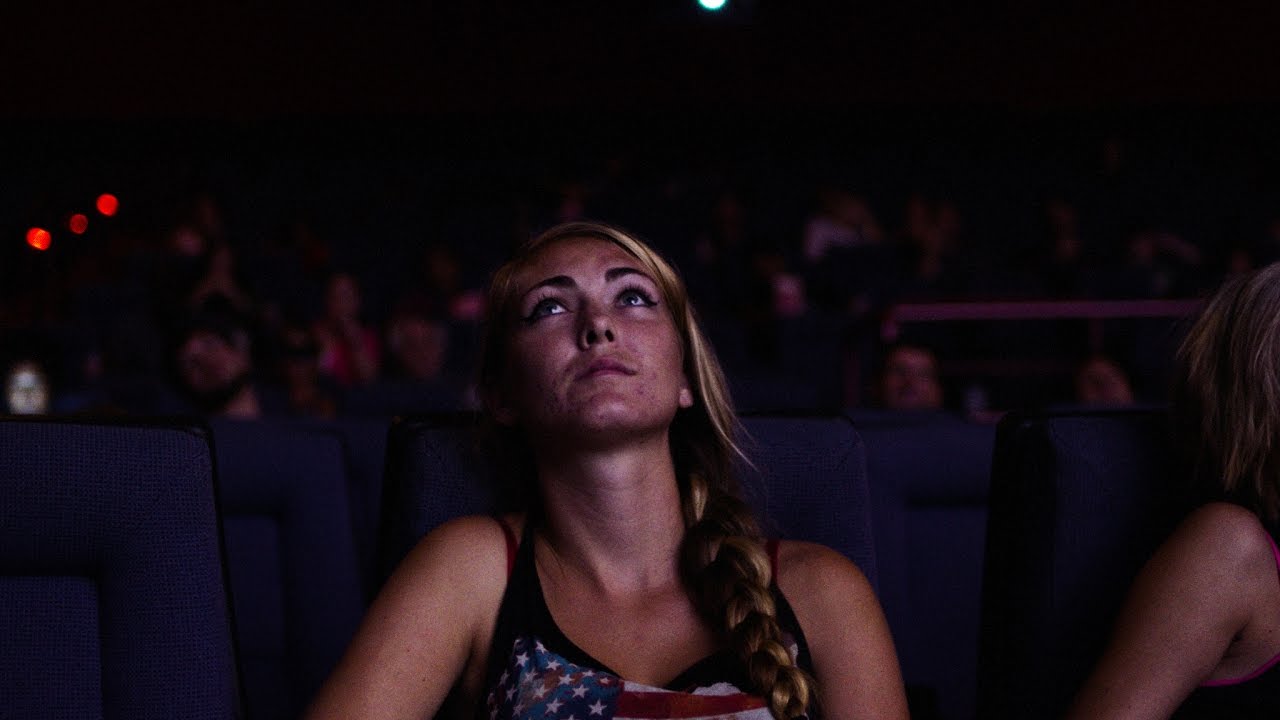