On January 6, 2017, at approximately 8:42PM EST, The Young Pope meme died. For a short week at the beginning of the new year, HBO’s upcoming series starring Jude Law and Diane Keaton became the focus of of a viral meme where people took popular songs and stuck in references to the titular young pope. (My favorite example uses a Black Lips song.) Like most memes, it was on the verge of being played out as it cascaded towards the mainstream, culminating in its aforementioned demise as Blink-182’s Mark Hoppus decisively killed it by forcing it into the once beloved single, “The Rock Show”.

It’s easy to see what made people cling onto the ridiculousness of the meme in the first place. Judging from the trailers, The Young Pope is meant to be an “edgy,” mature drama taking one of the most revered figures in the world and making him a dark, sexy antihero. A seemingly natural extension of the trend that went back to Tony Soprano and Don Draper before giving us David Schwimmer as an alcoholic sommelier with ties to the mob, the series appears on paper a near parody of the genre that wouldn’t be far off from an intricate Bojack Horseman joke. The frivolity of the premise more than invites jokes lampooning a “cool” pope who presumably smokes, listens to punk rock, and sleeps around.

For HBO, the timing couldn’t have been better, as only weeks before its premiere, people had already turned the show into a mini-cultural phenomenon. What made it effective is that by making fun of a show that the majority of Americans hadn’t seen yet (a joint production with Sky Atlantic and Canal +, it aired in Italy this past fall), they were able to make fun of a show they didn’t realize was in on the joke. Instead of a standard prestige drama, The Young Pope is entirely the grand and beguiling vision of esteemed Italian director Paolo Sorrentino. A striking visionary responsible for beloved films This Must Be The Place, The Great Beauty, and Youth, Sorrentino is an inventive auteur with a keen sense of humor who has crafted a surreal portrait that, at its peaks, is unlike anything else on television today.

Set at the initiation of a regime change, the show follows Lenny Belardo, a 47-year old American cardinal played by a wry Law, who unexpectedly wins the Papal conclave due to behind-the-scenes machinations that are slowly revealed over the course of the first season. As shown in recent trailers, Belardo is far from the progressive beacon of change that many presume him to be, but is in fact a tyrannical despot who yearns to usher in a new age of conservatism into the Catholic Church. Quixotic, charming, and contemptuous, Belardo aims to drive away what he views as “part-time believers” by establishing a prohibitive church where priests no longer forgive sin at will and, in his words, is home to solely “fanatics for God.” His harsh extremism is antithetical to the publicized humility of Pope Francis, and in direct opposition to real-life steps the church has taken to mitigate its stances against abortion, homosexuality, and divorce. In a time when the real pope’s more progressive stances incite discord among the church’s more right-leaning population, The Young Pope is emblematic of the reactionary conservatism that has taken hold in the western world in the past year, including Trump and Brexit. 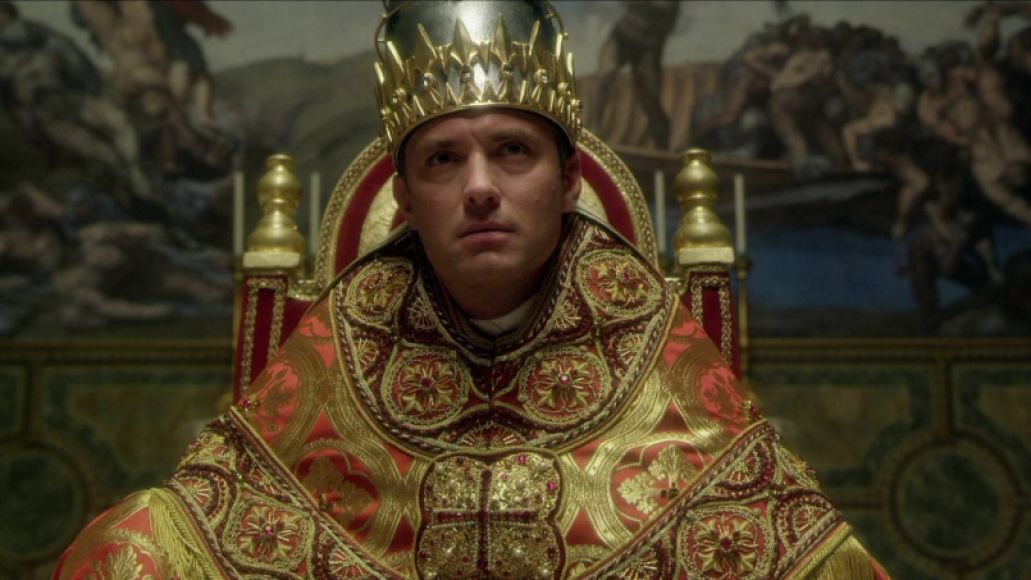 Upon taking office, Belardo chooses the name Pius XIII, an homage to the controversial Pius XII, whose actions during World War II have led to decades of debate. He decides to revamp the image of the Church by refusing to appear publicly, hoping to increase its mystery by hiding his face from the world, directly citing Daft Punk, J.D. Salinger, and yes, Banksy, as inspirations. Rather than using cultural signifiers to appear relevant, Sorrentino leans into the absurdity of the show’s concept by embracing camp and blending it with a bizarre surrealism. Law hams it up in a sinister, electrifying role with grand proclamations and outrageous rants, giving his all in a performance that the show would crumble without. More than “on the nose,” The Young Pope features scenes of Law smoking cigarettes while saying “there’s a new pope now” and donning the Papal Tiara in a montage while LMFAO’s “Sexy And I Know It” plays. Later in the series, a moment of personal grief is punctuated by Jeff Buckley’s “Hallelujah” cover. To top it all off, the fictional Pope frequently insinuates that he may not even believe in God.

Sorrentino’s series plays as a lucid fever dream, full of sepia-toned flashbacks, hallucinations of nude figures, grotesque body horror, and ornate depictions of historical landmarks throughout the Vatican. His style is obsessed with repetition, from frequent cuts to characters performing the same mundane tasks over and over to songs by Andrew Bird (“Logan’s Loop”) and German producer Recondite (“Levo”) serving as a de facto score by appearing constantly throughout. Its story is ponderous and slow-moving, often eschewing plot momentum in favor of internal ruminations about the nature of God. The show is bolstered by a top notch supporting cast that includes a jovial yet foreboding Keaton, an angry and exasperated James Cromwell, and Silvio Orlando, an Italian actor delivering what should be his breakout role as the Cardinal Secretary of State, a desperate and often pitiful figure who invites compassion as he feebly attempts to take on the new Pope.

A bold statement from a director largely unknown to American audiences, The Young Pope is a captivating, at times frustrating series, one full of irreverence yet also a profound respect for the mystery of religion. The show falters when it focuses on the familiar HBO tropes of uncovering the underlying politics of well-known institutions, and is at its most powerful when pondering the nature of faith, devotion, and extremism. Contrasted with its counterparts in Game of Thrones or Westworld, whose fast-moving narratives invite instant social media reactions, The Young Pope’s closest cousin on HBO is The Leftovers, another surreal, dreamlike program about the intricacies of faith.

The show keeps its audience at bay with its pacing and tone, visually arresting and fully owning up to its outrageous tendencies. Without the context of the series, images of a pope wearing sunglasses and smoking cigarettes scan as laughable, which undoubtedly led to the rise of memes surrounding it. Instead, The Young Pope stands out as a particularly mystifying examination of the sacred and the profane. It’s an intentionally strange show that reaches moments of profundity by never taking itself too seriously, unlike the self-important slog that turned True Detective Season 2 into a show so easily mocked. While it’s bound to be divisive, now that the memes have run their course, audiences may begin to be drawn into this singular story.

The Young Pope premieres on HBO on Sunday, January 15th.

HBO's The Young Pope: Don't Believe Everything You Meme