Musicals are back, baby.

Over the past year or so, pop culture has seen a wild surge in the medium: Lin-Manuel Miranda conquered Broadway with Hamilton, Rachel Bloom turned The CW into a thing again with her award-winning series Crazy Ex-Girlfriend, and Damien Chazelle’s La La Land is currently a favorite to sweep both this weekend’s Golden Globes and next month’s Academy Awards. So, it’s not exactly a surprise that creator Rob McElhenney would revisit the musical for the season premiere of his 12th season behind FX’s insanely popular comedy juggernaut It’s Always Sunny in Philadelphia.

After all, it’s not like the show hasn’t tapped that genre before (see: “The Nightman Cometh”), and considering McElhenney and co. wrestled with a variety of formats last season — some to success (“Charlie Work”), others to failure (“Being Frank”) — it was only natural they’d return to one that definitively worked. And yes, last night’s episode, “The Gang Turns Black”, absolutely worked, finding the show drawing from the creative well that has made this such an enduring brand for over a decade and counting. It was funny, it was creative, it was irreverent, and, more importantly, it was risky.

Here’s the lowdown: It’s a dark and stormy night in the City of Love, and the Gang — ahem, Sweet Dee (Kaitlin Olson), Dennis (Glenn Howerton), Mac (McElhenney), Charlie (Charlie Day), and Frank (Danny DeVito) — are not-so-cozily watching an old VHS copy of The Wiz. As expected, they’re not really digging the movie, mostly because they didn’t choose it. That honor belongs to Dee’s “new roommate”, aka Wil Garret’s Old Black Man, who’s peacefully asleep as the movie carries on and the lightning rages behind them. That lightning, however, proves magical … like Big or something. 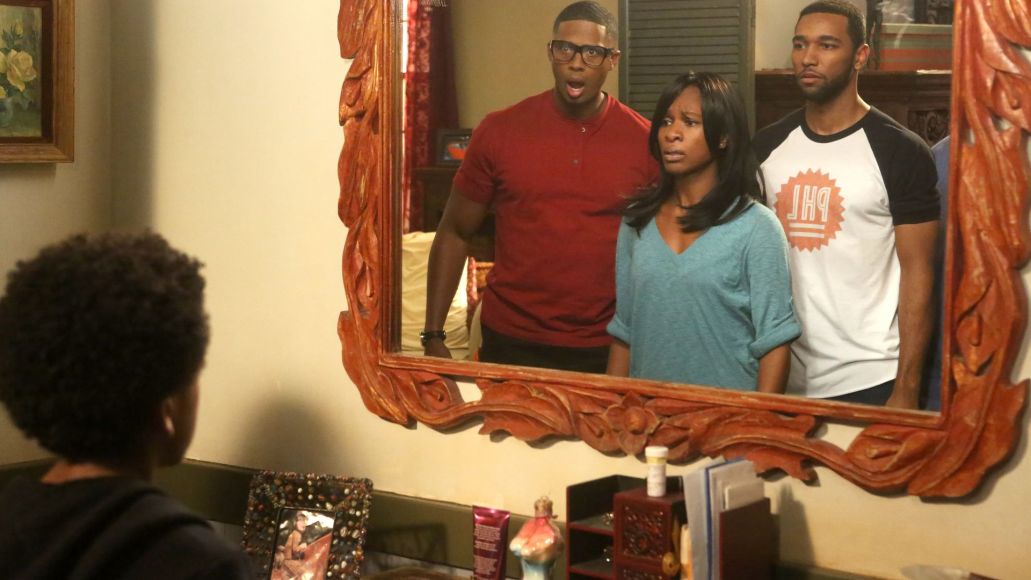 Basically, the Gang is electrocuted by the lightning, yada, yada, yada, and they all wake up black. To be fair, this isn’t very shocking (pun intended) — if you recall, this is the same show that somehow managed to pull off blackface without getting shutdown by outrage (see: “The Gang Makes Lethal Weapon 6”) — but what’s interesting is how the episode twists the initial premise. Rather than resorting to their off-the-cuff brand of hijinks, the Gang is too busy trying to comprehend this crazy surreality, even spending a good chunk of time figuring out what movie their predicament is most like.

Thanks to Dee, they settle on Quantum Leap — in other words, they can see their original selves, but their reflections reveal their new black equivalents — and the show goes so far as to include Scott Bakula himself. But the true parody of the episode lies in the musical format, and as Dennis hilariously observes early on, this world wants them to sing, all to the tone and cadence of The Wiz. Seeing them break into song never gets old, especially as they try to sort through the lessons they’re suppose to learn while they’re seeing the world from a much, much different perspective.

Inspired after catching Miranda perform Hamilton, Day wrote the songs for this episode and helped usher the story along after the initial pitch involving lightning and racial swapping fell on the Always Sunny’s team desk. “It was one of those ideas you say because you think it’s actually too extreme,” he told Entertainment Weekly. “Like, ‘We can’t do this.’ And then the more we talked about it, we were like, what if we did do it?” It was a process, however, namely because the writers had to cleverly “walk that fine line of, let’s do some social commentary without trying to be too preachy.” 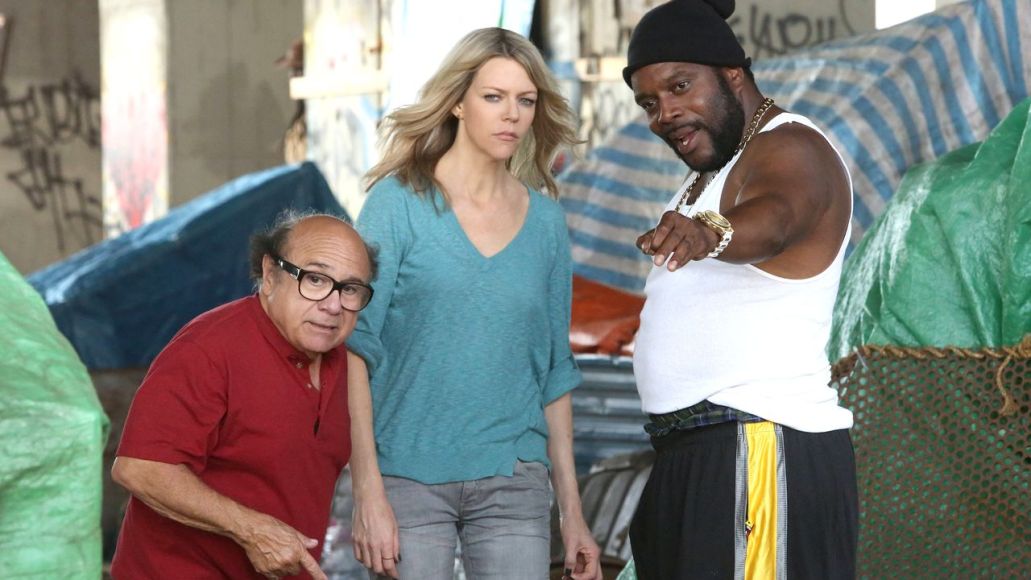 And really, that’s the true twist of this episode. Whereas it would be so easy to lean on stereotypes and collar-tugging humor (and admittedly, this episode does that, albeit wisely), the show, instead, goes for the jugular. During its culminating finale — a signature of the series undoubtedly learned from The Larry David Rulebook — the Gang are reported for causing a disturbance at a white owner’s video store, where they’re trying to get their busted VCR fixed to get back home. When the cops pull up, Charlie attempts to diffuse the situation by pulling out a toy train from his pocket.

Of course, we know where this is going, but what we don’t know is how far: When they cut to the reacting cop’s POV, it’s not Charlie we see, but an innocent black kid (played by AJ Hudson), who’s gunned to the ground. It’s a very blink-and-you’ll-miss-it shot, and it happens so fast that you actually might have, but it’s the most important moment of the episode. In fact, for a show that has repeatedly mined darkness for comedy, it’s easily the darkest moment of the series, a jarring gasp that’s all too real despite being wedged within a premise that couldn’t be further from reality.

In a very conscious decision, the action immediately shifts and sweeps over the Gang, who all start singing with urgency (while clicking their heels in desperation): “We’ve learned our lesson, and we want to go home.” It’s not exactly played for laughs, but it’s not exactly against them, either. There’s a lunacy to the proceedings that suggest we’re also supposed to learn something — one rule that certainly goes against David’s ol’ adage of No Hugging, No Learning — but we don’t exactly know what. It’s the final scene that brings it all home — the final twist, if you will. 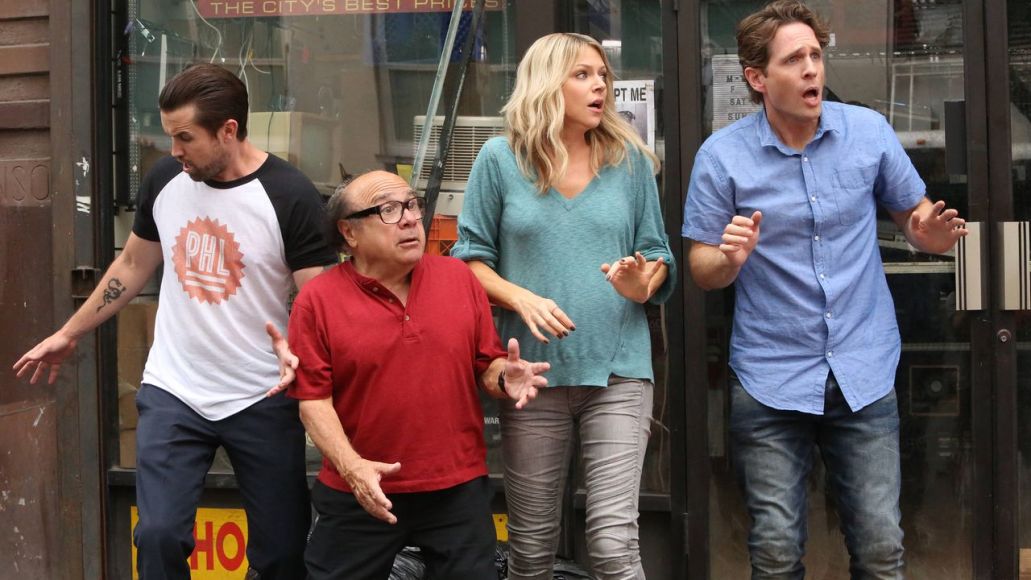 Spoiler: It was all a dream, specifically the work of the Old Black Man, who wakes up disappointed to find out none of the asshole protagonists learned a single thing. But, not to sound pedantic, isn’t that the reality? How many times have we seen an incident like this actually happen on the news? And how many times do we lament, share posts, and move on with our lives? True to its cynical ethos, Always Sunny never wags its finger, letting the story speak for itself, while also giving Dennis the mic to say: “That’s great, but we don’t give a shit because we don’t like hearing about other people’s dreams.”

Truth be told, that’s a song too many of us know.

It’s Always Sunny in Philadelphia airs Wednesdays at 10 p.m. EST via FX. For more, revisit Randall Colburn’s excellent editorial, The Downward Spiral of Dennis Reynolds, and learn how the Paddy’s Pub sociopath won our hearts without any implications.