Ohmigod, we’re back again. Nick, our Beard Hunk, has some surprises up his sleeve but I’m just gonna go ahead and spoil the most important one for you right now. THE BACKSTREET BOYS ARE ON TONIGHT’S EPISODE!

The Bachelor has featured a mix of interesting musical moments over the course of its run. Some have been truly inspired and others are downright peculiar. Allow me to interrupt my own recap to bring you my favorites, in no particular order:

01. The only way to fly: Previous seasons of the show used descriptive subtitles to clue the audience in to The Bachelor‘s profession. For example, The Bachelor: Officer and a Gentleman star Andy Baldwin was a US Naval officer, and pilot Jake Pavelka soared into our hearts as The Bachelor: On the Wings of Love. I can only assume that ABC is sick of sending royalty checks to Jeffrey Osborne; his song was played too many times to count that season and yet I am unable to find a single example of it on YouTube. Please enjoy this amazing fan tribute that I discovered, instead.

02. The band Train: In season 15, Brad and Jackie were treated to a private concert by “the band Train.” Not just Train. THE BAND TRAIN. Again, it is absolutely killing me that I cannot find a free video clip of this particular moment in Bachelor history. If you want to pay $1.99 to see it yourself, check out episode 2 here. 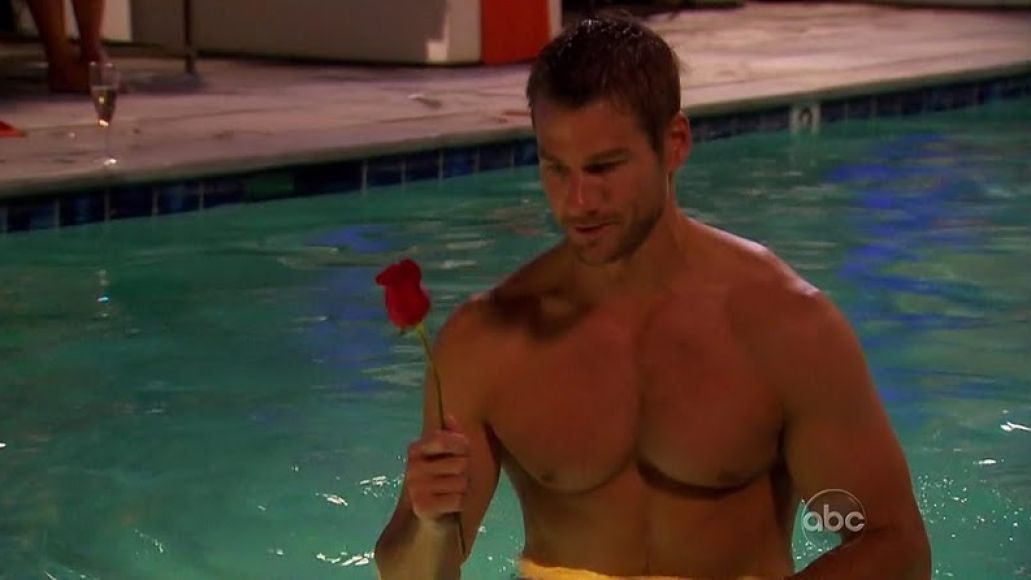 03. A standing date with Seal: Is there any more appropriate song for this television franchise than “Kiss from a Rose?” Of course not. That’s why Seal Henry Olusegun Olumide Adeola Samuel has performed his classic ballad twice (so far), including at the wedding of Jade and Tanner. 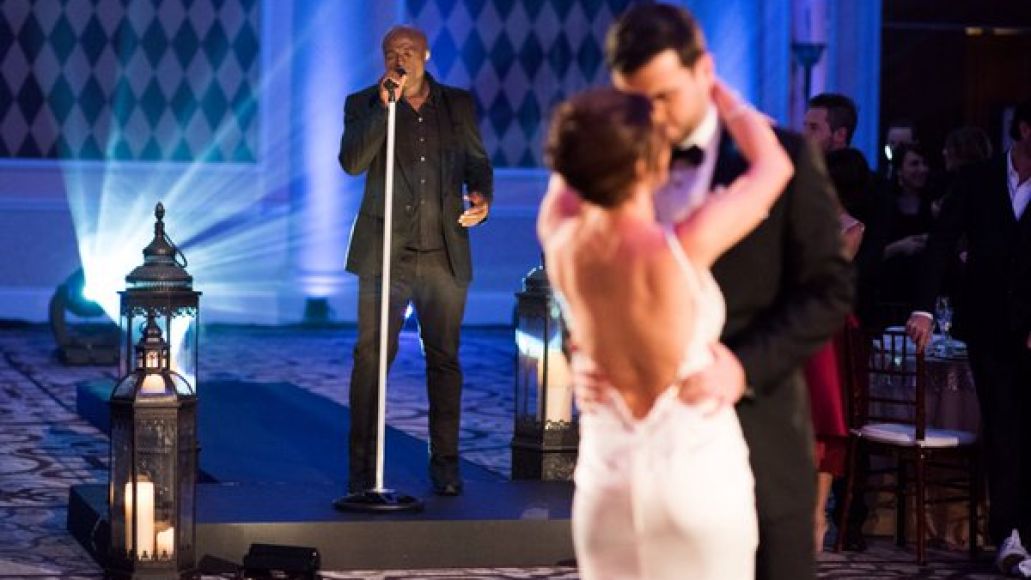 04. ’90s nostalgia done right: First impressions are everything. On JoJo’s season of The Bachelorette, radio DJ Wells made the most of his industry connections and stepped out of the limo accompanied by All-4-One singing “I Swear.” (Full disclosure: I know this is cheesy. So, so cheesy. But Wells is my favorite contest to ever appear on the show and he can do no wrong in my eyes.) Watch that one here. 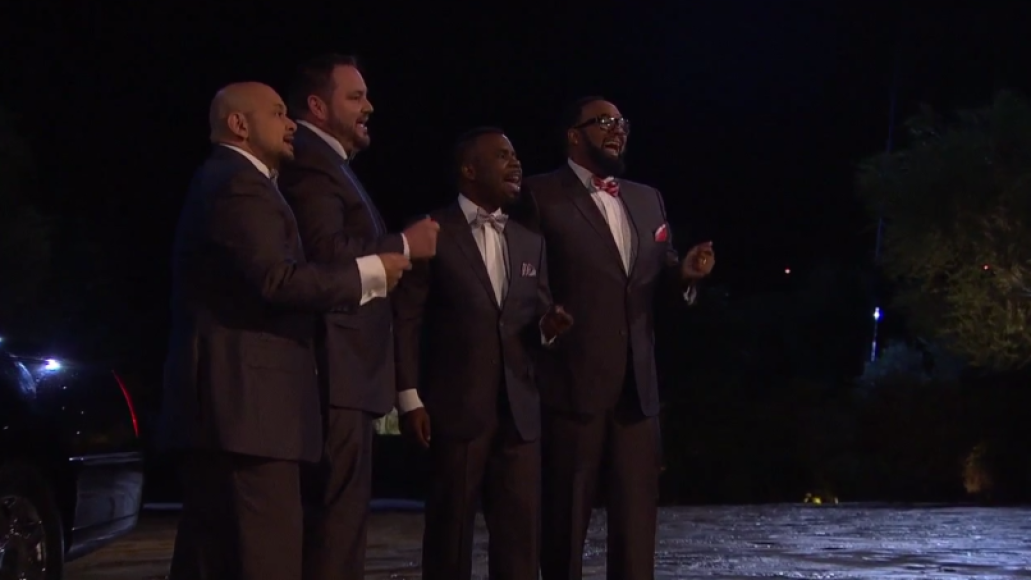 05. Quit playing games with my heart: Reserving this spot for whatever happens tonight with BSB. I’m sure it will be magical. 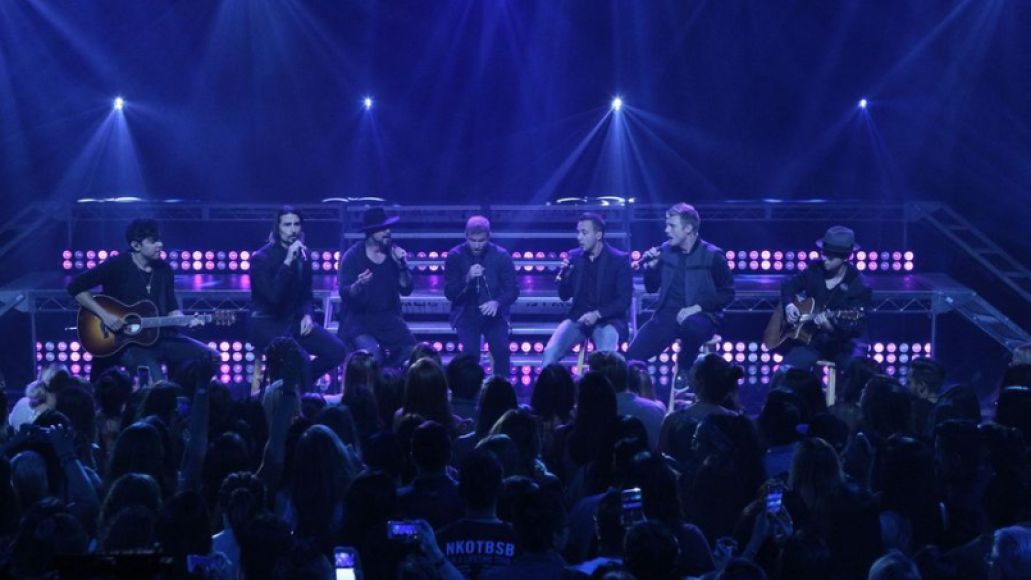 THE PLAY BY PLAY

We left last week’s episode on a cliffhanger. It was time for Nick to explain to the other contestants on his date why he gave Liz the boot.

Understandably, the remaining women have a few questions for our Bachelor as we head into the rose ceremony. To make things as awkward as possible, Nick retells the story of his sexcapade to the full group and then is forced to have the same conversation over and over as he sits down for individual conversations with the women. But as the evening goes on, Nick’s honesty seems to be resonating with the women.

Proving once again that she has no idea how to read the room, Corinne hatches a plan to make it to I-don’t-even-know-what-base with Nick. “I have the it factor that guys really like,” she purrs, wearing only a trench coat, gazing at herself in a mirror.

Step 2: Ask ABC intern to set up a giant cushion and can of Reddi-Wip outside

Step 3: Spray in and lick out an inordinate amount of whipped cream from Nick’s mouth

A few of the women peek through windows to figure out just what’s going on. “What was the whipped cream for?” the others ask.

This goes further. You get it. Black bar censors are out in full force. But Nick knows he’s in for a world of trouble and puts on the brakes. There will be no sex on the outdoor cushion this evening! He calls Jasmine over to steal him away. Corinne is, of course, beside herself and goes off to cry in the bathroom. 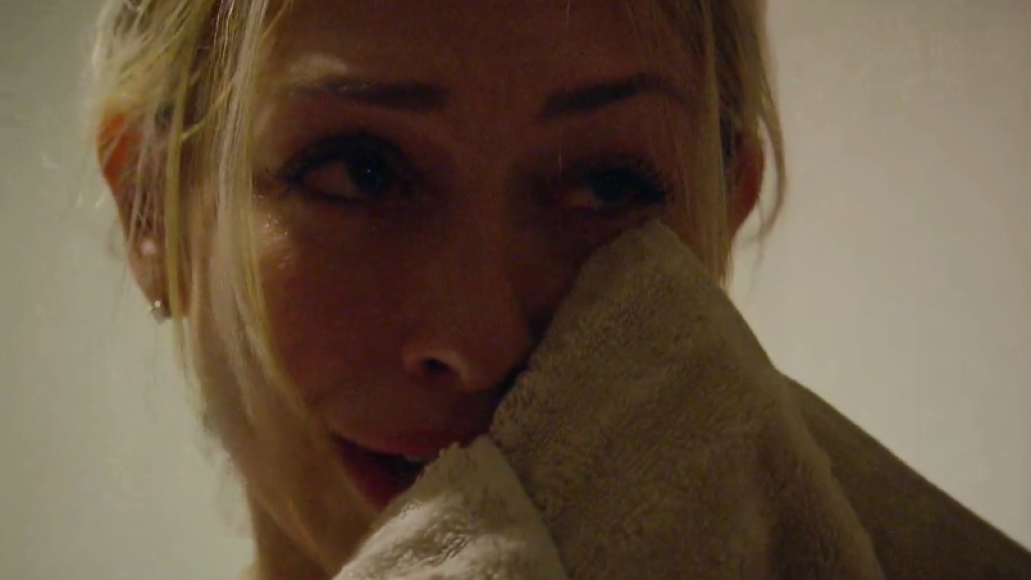 It’s time to hand out roses, but Corinne is not standing with the group! Comfortable with her rose from the previous date, she decides to skip the ceremony and go straight to bed. Not cool, Corinne!

Time to say goodbye to Elizabeth, Lacey, and Hailey. This tender scene is intercut with shots of Corinne snoring away.

ALERT, ALERT! There’s actually a Reddi-Wip commercial during the break. That is some dynamic product placement.

We pick things up the next morning, as Chris Harrison delivers what he promises to be a mind-blowing date card. Danielle L., Christen, Christina, Whitney, Taylor, Jasmine, and Corinne are selected; the card simply reads, “Everybody.” And then … a familiar tune blasts over the house speakers. A.J., R.J., CeeLo, Kevin, Brian, Danny, Donnie, Howie, and Aaron Carter’s brother strut into the house. That’s right, The Backstreet Boys are finally here! Screaming and hugs all around.

A.J. offers up some advice for the women about to go on the date:

The women pull up to a rehearsal space and the purpose of the date is revealed: the contestants will be serving as background dancers for a BSB concert! The formula for today’s winner will be knowledge of moves + chemistry with The Bachelor, and then one lucky lady will get some “private” on-stage time with Nick and an audience of 500. Let the dancing begin!

Jasmine, a former Dallas Cowboys cheerleader, is feeling confident. Corrine, on the other hand, admits to being a horrible dancer with bad short term memory.

So she goes off to the bathroom to cry. Pay no matter, it’s showtime! 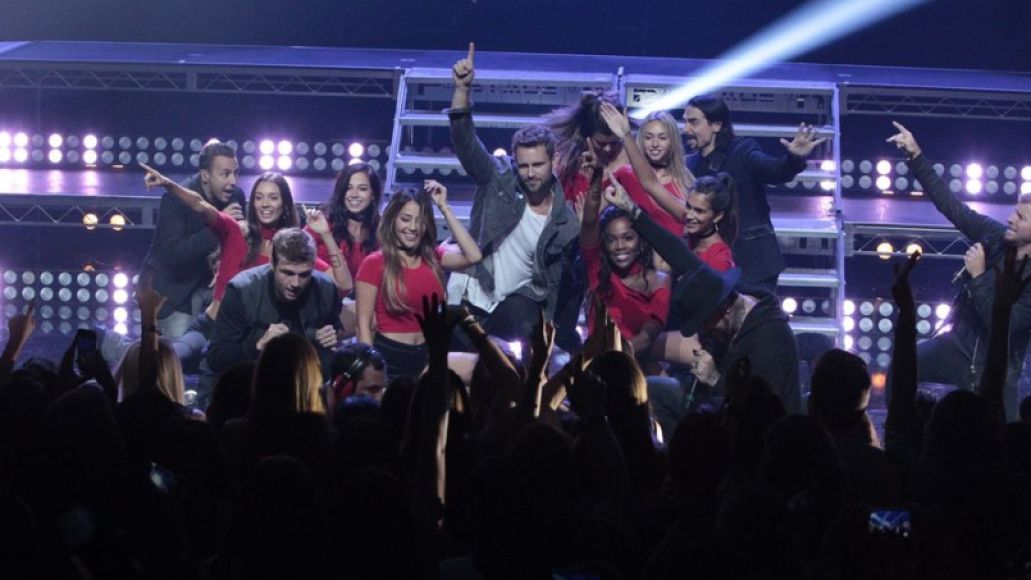 Danielle is chosen as the winner. She and Nick slow dance on stage and start making out to the sweet sounds of “I Want It That Way” as the other girls look on with jealousy.

After the concert, Corinne is the first to grab Nick for a private convo. Choreography, or “planned dancing” as she calls it, is not Corinne’s strong suit. She plays the sweet card again and apologizes for sleeping through the rose ceremony. And then proceeds to go take a nap somewhere. WTF?

Next up is Danielle L. who throws out the Trademarked Bachelor Phrase — “I can see myself falling in love with you” — as sexy music plays in the distance. Nick is on board. “The Backstreet Boys think we have amazing chemistry,” he replies, which is not something you hear every day. Aaaaand the group date rose goes to Danielle!

The sun rises on a new day, and it’s time for Vanessa’s one-on-one date with Nick. “You make me feel like I’m floating,” reads the date card, and as usual, we can take this literally because we pull up to an airport with a zero gravity plane. So, what’s the plan? Are we recreating the “Scream” music video? What about OK Go? Nah, they’re just floating around to the Blue Danube waltz. It looks incredibly fun, even as they bang their heads on the ceiling while trying to enjoy a zero-gravity makeout session.

But then, disaster strikes. “Open the barf bag, HAL,” pleads a queasy Vanessa. “I’m afraid I can’t do that,” replies Nick. Just kidding! They continue to make out even after she vomits. Now that’s true love! Nick says that Vanessa gives him optimism and confidence for a happy ending to his ongoing televised love story. Rose = secured!

On our next group date, we find self-proclaimed high school and college track star Nick running around in short shorts. Rachel, Alexis, Astrid, Jaimi, Sarah, Brittany, and Dominique are about to find out what “I’m done playing the field” means.

Time 4 sports! Specifically a “Nickathalon.” And who better to coach the women through this date than Olympic legends of past and present Allyson Felix, Carl Lewis, and Michelle Carter? True athleticism and the mastery of the ABC props department are on display, with such events as tossing a javelin arrow into a heart bullseye and long jumping into a cardboard limousine.

“Who knew that little booger was so athletic?” says a stunned Jaimi as Alexis clears the high jump.

Rachel, Alexis, and Astrid move into the final round—a 100-meter dash. Whoever wins must grab a giant fake ring at the end of the sprint and jump into a hot tub for some alone time with Nick. He sits and waits, seductively, as a fake Black Keys song plays in the background.

The race is a nail-biter, folks. Rachel crosses the finish line first but knocks over the pedestal; the ring smashes to bits. Astrid grabs the largest piece and hops in the jacuzzi.

That evening at the cocktail party, Dominique is feeling discouraged. She has the sense that she’s falling behind in terms of how her relationship with Nick is progressing, and watching him make out with other women isn’t helping matters. When they finally get a chance to talk, Dominique calls Nick out for not paying attention to her during the group date. The conversation doesn’t exactly go as planned, as Nick admits that he doesn’t see their connection being strong enough to last…and he sends her home. We’re starting to see a pattern; Nick doesn’t want to string women along for the ride if he knows he doesn’t see a future.

He breaks the news to the rest of the group and gives the date rose to Rachel.

At this point, I’m not sure how many hours I’ve been sitting on the couch watching this episode. The women are drinking coffee out of matching mugs to indicate that another morning has arrived. Chris Harrison pays a visit to say hello but ultimately break the news that there will be another rose ceremony in the evening, and more women will be going home. In lieu of a cocktail party, Nick has decided to throw a pool party instead! Bikinis versus ballgowns—the choice is obvious.

Raven makes sure Nick is protected from the sun…

Corinne’s wacky ‘n’ sexy plan for the day is to straddle Nick in a bouncy house, much to the dismay of the other women.

Alexis is not pleased with the day’s events. “It was the worst pool party I’ve ever been to.” With tensions running high, Raven decides to confront Nick about his decision to keep Corinne in the running.

After Jasmine and Taylor each express their concerns to Nick, Vanessa pulls him aside to let him know she, too, is displeased with his behavior. She pulls an incredible teacher move, “I’m not judging Corinne, I’m judging YOUR actions,” and says if he’s only looking to mess around she’d rather not receive a rose from him. These women are not here to put up with any crap!

A showdown between Corinne and basically everyone else in the house. If it’s anything like my favorite pop culture confrontation, we’re in for a real treat.