ABC’s The Bachelor is the longest-running franchise in entertainment history*, having first hit the airwaves as a radio show back in 1927**. It’s so popular, in fact, that it was recently voted “best show of all time” in the most recent Consequence of Sound Readers’ Poll.***

Monday night marked the premiere of Season 21, and it’s already shaping up to be quite the television event. Our hunk du jour is Nick Viall, who is famous for being the runner-up in two previous seasons of The Bachelorette. On a personal level, Nick is both “the guy my friend told me used to live near my office” and “the guy I saw at Pitchfork festival once, who — despite having a last name that’s pronounced ‘vile’ — was quite handsome in person.”

Between his aforementioned Bachelorette appearances and a summer fling on Bachelor in Paradise, Nick has emerged as one of the most self-aware contestants in show history. Given his penchant for common sense and willingness to play against the fairy-tale-relationship narrative, Nick doesn’t really represent the typical Bachelor — and that’s a good thing.

In recent years, The Bachelor has experienced a cosmic shift, one in which the show and its spin-offs have indulged in its own ridiculousness (have you seen the opening credits to Bachelor in Paradise?) and encouraged viewers to be open with their fandom. And it’s not just gaggles of sorority girls and basic baes, fueled by copious amounts of Fantasy Suite Cabernet, shrieking at the TV in the hopes that host Chris Harrison crashes their viewing party.

Dear readers, do you have any idea how many of your favorite comedians are card-carrying members of #BachelorNation? Every UCB/Comedy Bang Bang hero seems to be a proud fan. Here’s just a sampling of the folks who have declared their love for the show, off the top of my head:

If it’s good enough for the stars of Too Much Tuna, it’s good enough for me. So, with that I encourage you to watch and enjoy this show without hesitation. Do not call it a “guilty pleasure.” Do not feel bad about taking hours out of your Monday to pump this saccharine delight directly into your brain. Join me on this journey, won’t you? We’re all here for the right reasons.

Now, I wasn’t about to talk shop without doing some pre-show research, so I spent some time poring over ABC’s photo gallery to glean whatever information I could about the ladies. In what can only be described as a “Miss Lippy’s car is green” situation, there weren’t very many useful details revealed in the contestants’ bios. Allow me to share my findings:

— Most of the ladies have impossibly wavy hair, as per usual.
— Most of the ladies say that dolphins are their favorite animals.
— One of the contestants “would break into the White House and spend months sleeping in a storage closet” if she could do so without fear of the law.

I even forced myself to watch Sunday night’s “Countdown to Nick” preview. Did anyone else see it? I still can’t wrap my head around the segment that turned Nick into a bizarro universe Lucy Van Pelt, only instead of dishing out psychiatric advice for five cents, he manned a booth outside Urban Outfitters so fans could berate him about his previous appearances on the show. At one point, he even autographed a woman’s stomach. 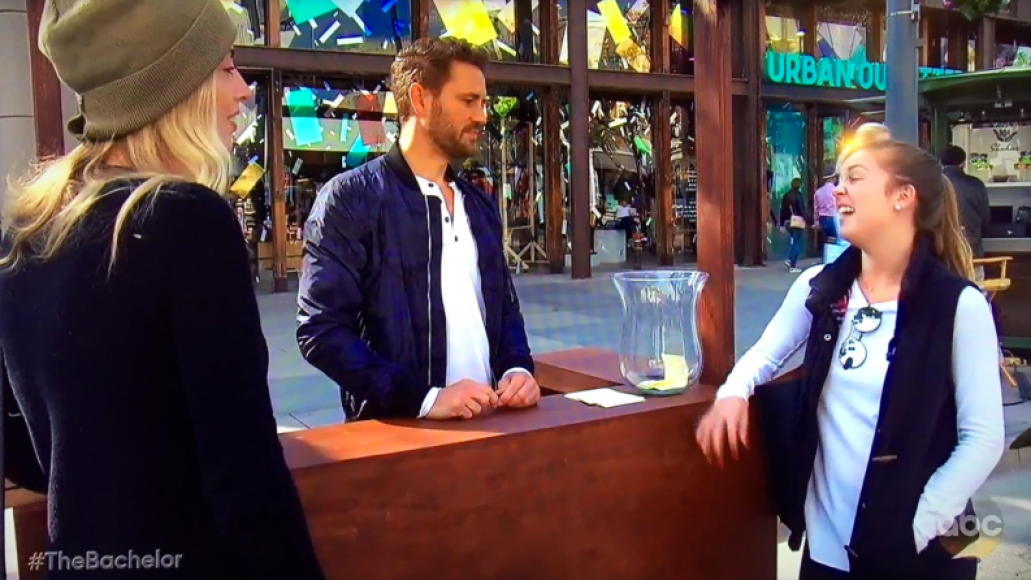 Let’s just forget about it. Time to talk about the good stuff…

The Play by Play 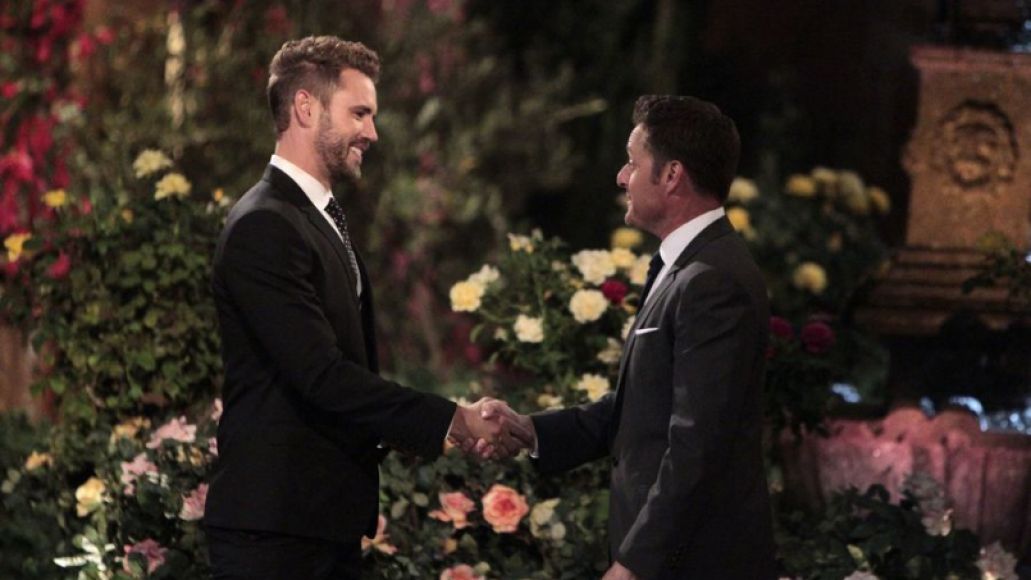 — The premiere episode has officially started, and Nick is shirtless, running through the streets of Chicago. This season’s classic workout montage has been supplemented with the MOST. GRATUITOUS. SHOWER. SCENE. EVER. Black bar over the junk. We’re barely three minutes in. Former Bachelors Chris Soules, Sean Lowe, and Ben Higgins lead the world’s most boring round table discussion, attempting to offer Nick advice based on their own experiences on the show. Enough of this nonsense. It’s time for “the most controversial Bachelor in history” to meet his potential soulmate.

— Nick’s love journey will begin with a whopping 30 women, and Chris Harrison has described them as “accomplished and interesting,” which hopefully means that we won’t see any job titles in the vein of “twin” or “chicken enthusiast” as we’ve had to endure in seasons past. Now, I didn’t run any mean/median/mode calculations, but as I glance over my notes, it appears as though the majority of contestants are between the ages of 23 and 26, with only three women in their 30s. Any guesses on our Bachelor’s age? If you said “36,” congratulations. You win a high-five from Nick.

— Life isn’t fair, so we will not be discussing every single woman who emerges from the limousines. But here are some highlights and lowlights from the dating pool:

01. Rachel is an attorney from Dallas who likes to work hard, play hard, and dance like nobody’s watching (she’s my favorite off the bat). 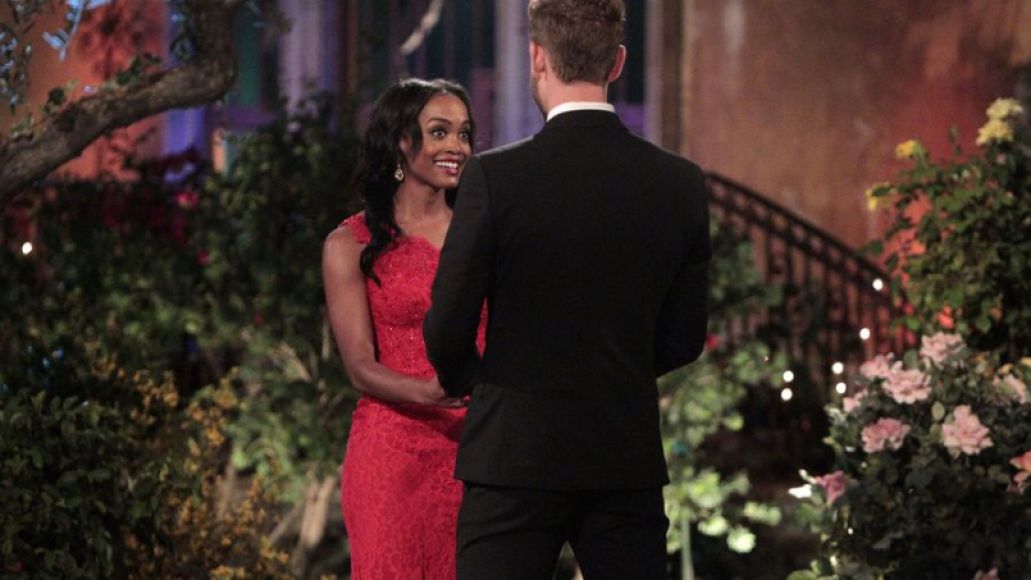 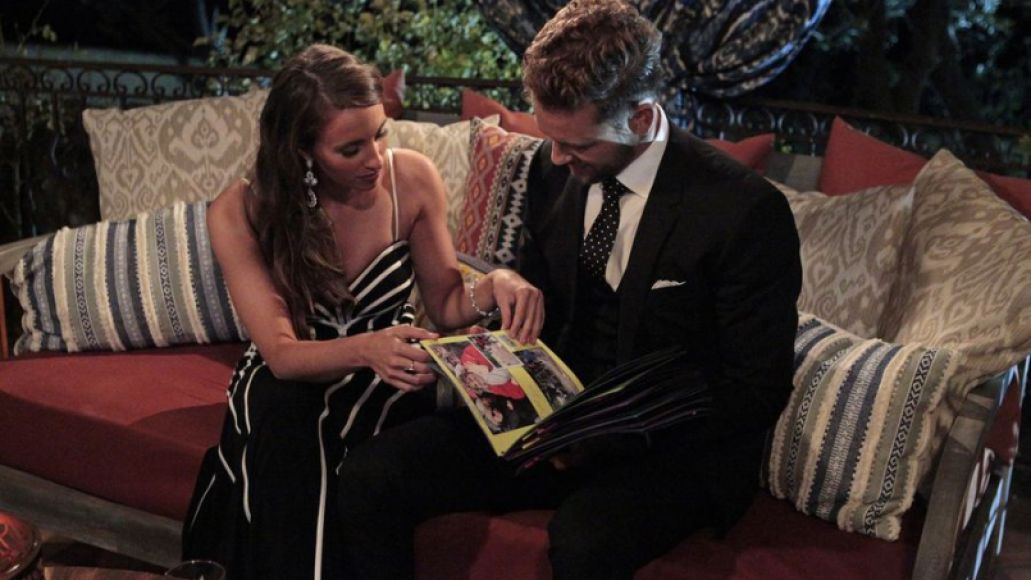 03. Raven is a small town girl with big city dreams, whose motto is “family, faith, and football.” 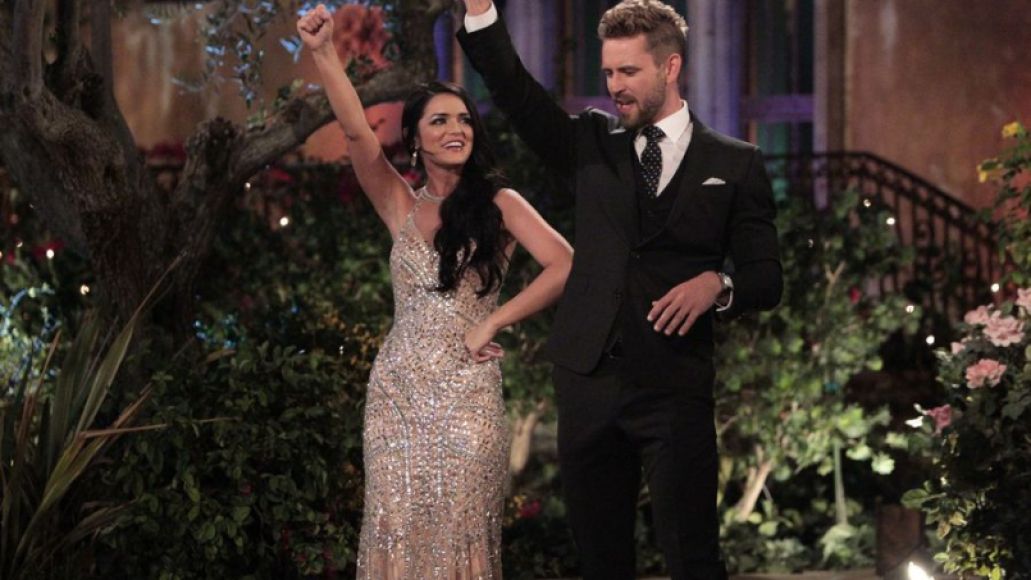 04. Corinne. Oh boy. She speaks about herself in third person (“Corinne’s world is glamorous”), and she still has a nanny at age 24. She clearly wants to be this season’s sexy villain. I’m sure it’ll work out great for her. 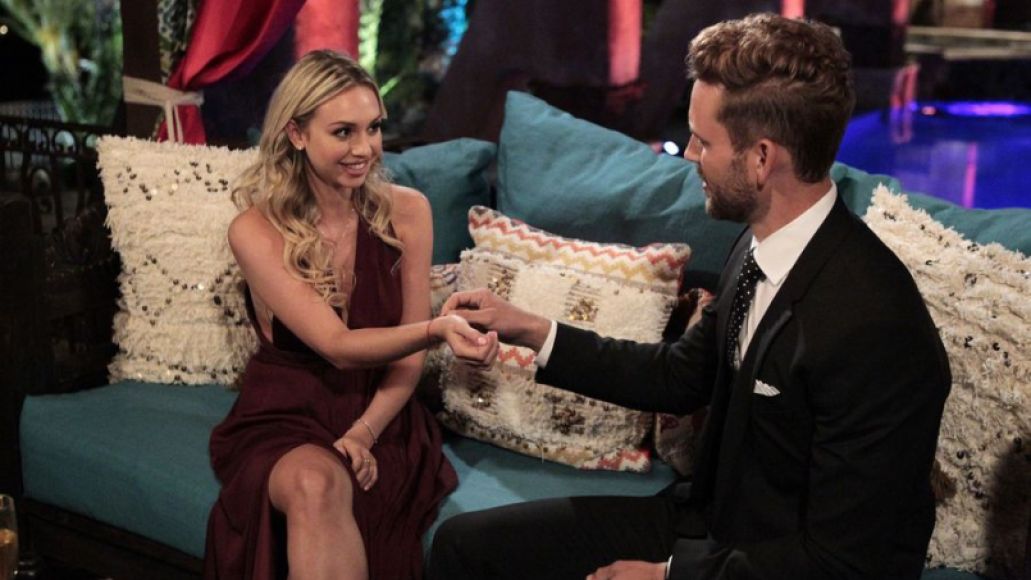 05. Danielle M., the neonatal nurse from Nashville, is giving me good vibes. 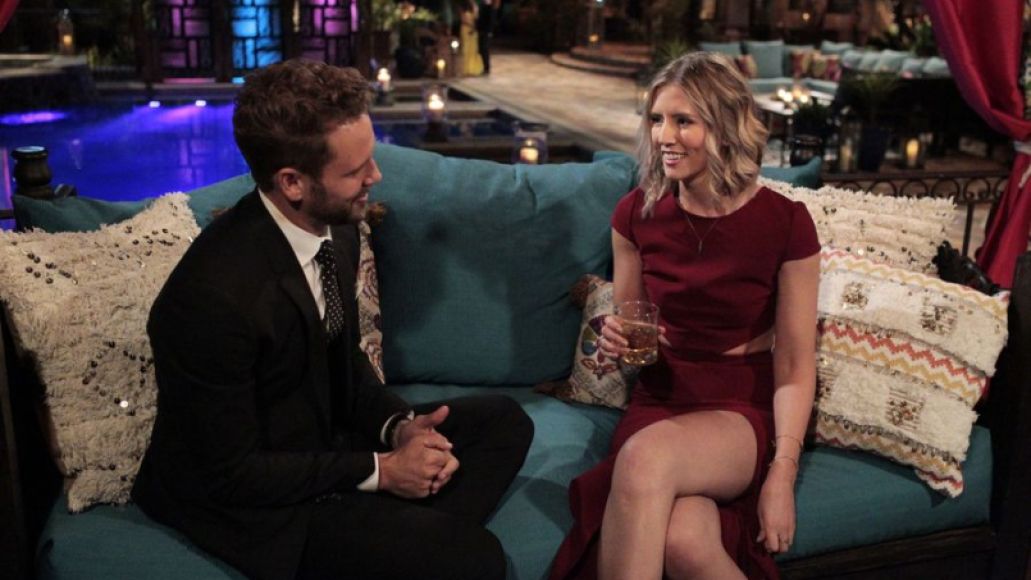 06. Mental health counselor Taylor impressed me with her academic pedigree and willingness to analyze Nick’s behavior before even meeting him. 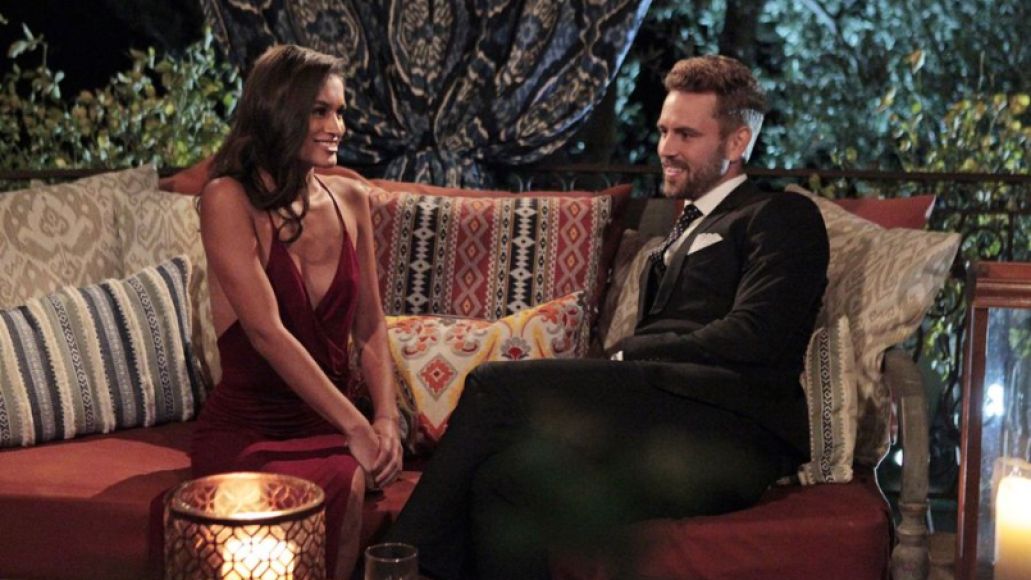 07. Alexis, who is obsessed with dolphins, arrives in Bachelor world wearing Katy Perry’s left shark costume. But she thinks it’s a dolphin suit. She does not appear to understand the difference between the species. 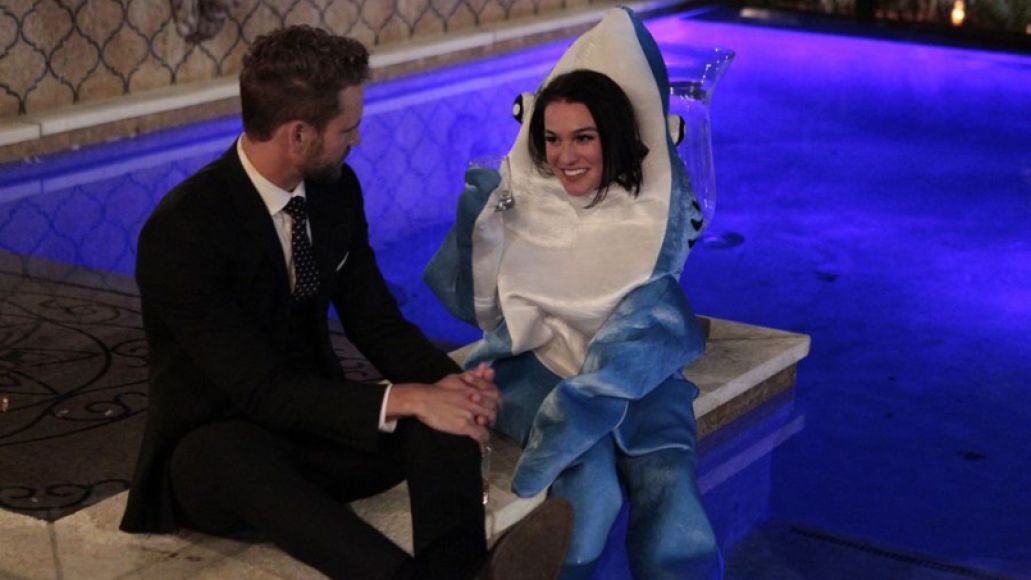 08. Wedding videographer Christen seduces Nick with a paper fan dance (fun!) but gushes over him like she’s “meeting a celebrity” (oy vey). 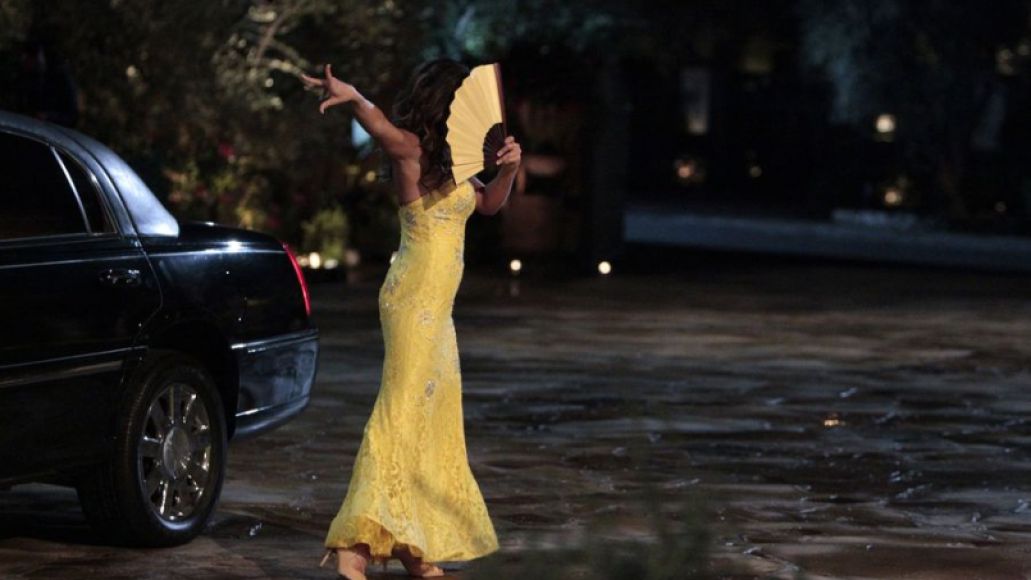 09. Lacey arrives on a camel and throws this out into the universe: “I hear you like a good hump, and so do I.” Fine, Lacey, the line you spent many hours practicing is now going to appear in a digital entertainment publication. Congratulations. 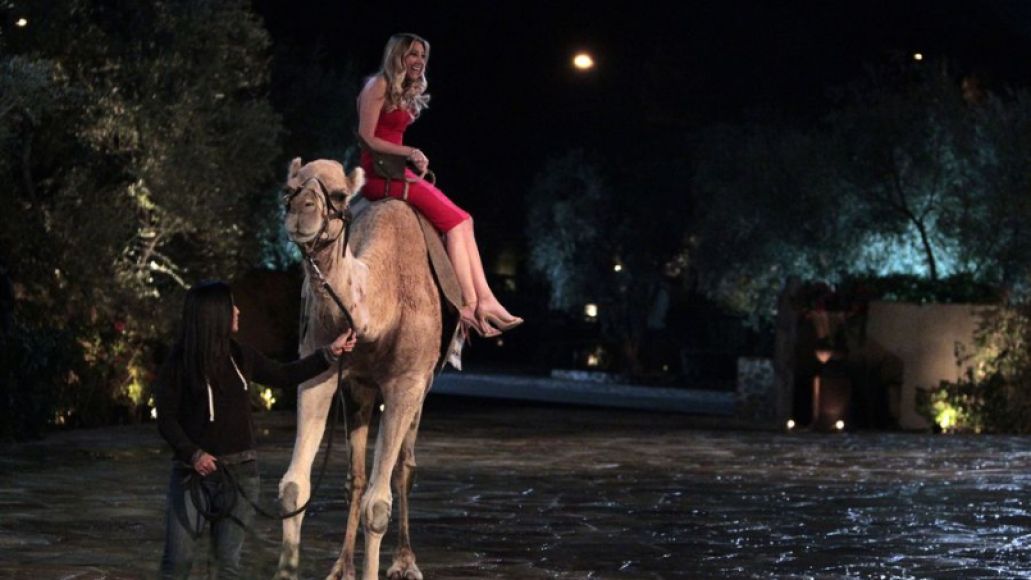 10. We know nothing about Whitney except for the fact that she’s from Chanhassen, Minnesota. She better stick around because I need to know if she was friends with Prince. Tell us Paisley Park stories, Whitney! 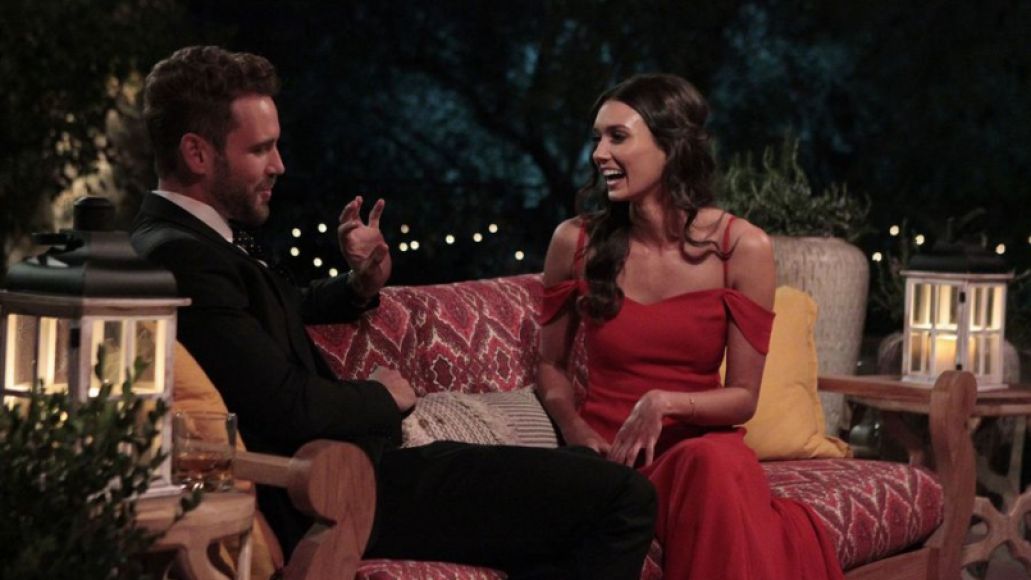 11. Liz, Liz, Liz. As we learn in an extended video package, Liz met Nick at the wedding of Bachelor in Paradise alumni Jade and Tanner almost a year ago, and they totally had sex. But, like, Nick asked Liz for her number, and Liz was all “I’m not giving it to you.” So that was the end of it, right? 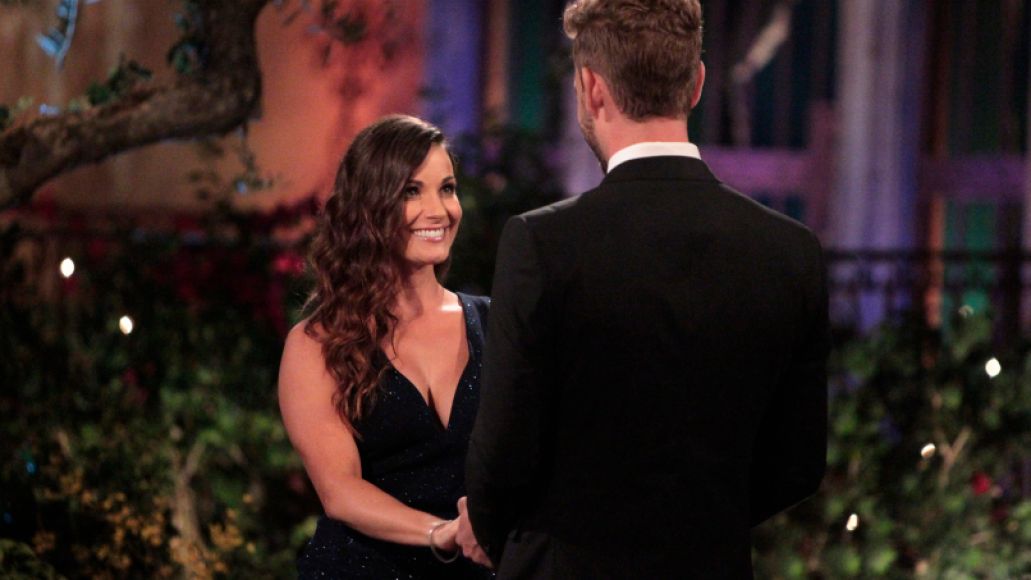 Except then Liz saw that Nick was going to be the next Bachelor so she was all “I’m gonna get on the show!” instead of just asking her friend for his contact information. She gets out of the limo and, like, acts as if they’ve never met, but he’s totes trying to conceal the fear in his eyes.

And later he confronts her in the house, like “Why didn’t I hear from you b4 there were cameras on us 24/7?” and in her head she’s all, Whatevs, we boned and I’m gonna slowly reveal this information to other girls in the house to make them jealous. Do u think she is def there for the right reasons? Bored of this storyline yet? I know I am. 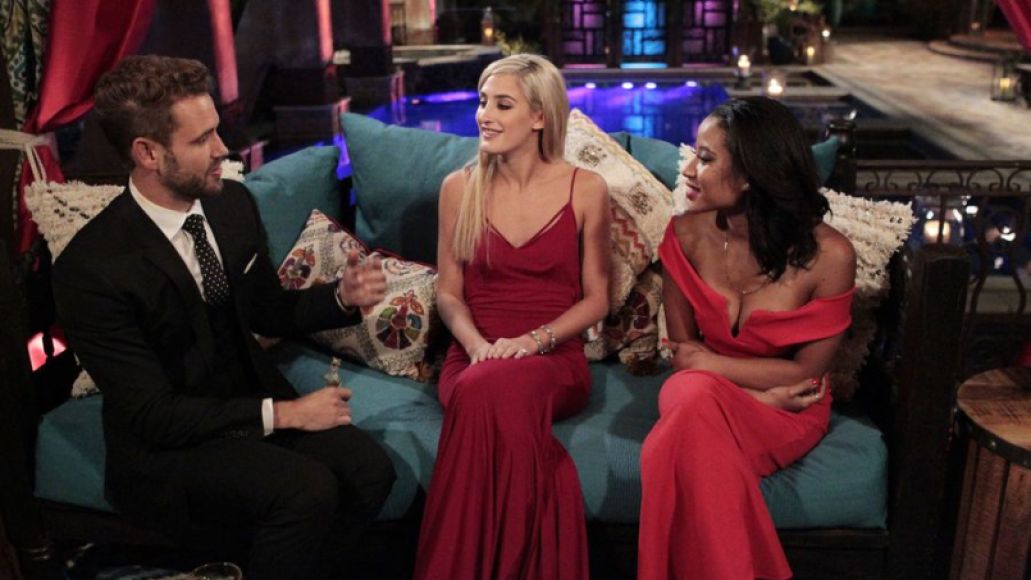 — As the vino flows and the women start to get to know each other (and Nick), a few trends emerge:

01. There are too many contestants wearing red dresses, and everyone is peeved.

02. Our Bachelor announces that he’s looking for a strong personality and wants the women to feel empowered. Corinne takes this to mean that she should interrupt Nick in the middle of a conversation, start aggressively making out with him, and brag to the other girls about her conquest.

03. All of the ladies claim to love Nick’s hair.

Kiss from a Rose

— Alright, let’s hand out some flowers: The first impression rose goes to … Rachel! Nick tells her, “I was taken by your aura” and smooching commences.

— In other words, we bid a fond farewell to Angela, Lauren, Michelle, Ida Marie, Olivia, Briana, Susannah, and Jasmine B.

"My heart is gold, but my vagine is platinum." #TheBachelor pic.twitter.com/oagv8suRJv

By the end, we’re left with a season teaser, which includes shocking moments like a topless photo shoot, a slap heard ’round the world, and a Backstreet Boys gig. I can sleep easy knowing that there will definitely be a “crying over the balcony” scene towards the end of the season. Of all the Bachelor cliches, that is definitely one of my favorites.

Let me end this tip-off with a special gift. Nothing brings people together like wordplay, so in the spirit of Cumberbitches and Beliebers, I decided to invent a name to describe Nick’s fans (myself included). Ready for it? From this day forward, consider yourself a VIALLPHILE™. T-shirts and enamel pins to come shortly. You’re welcome.

The Bachelor 2017: Your Guide to Rejections and Roses